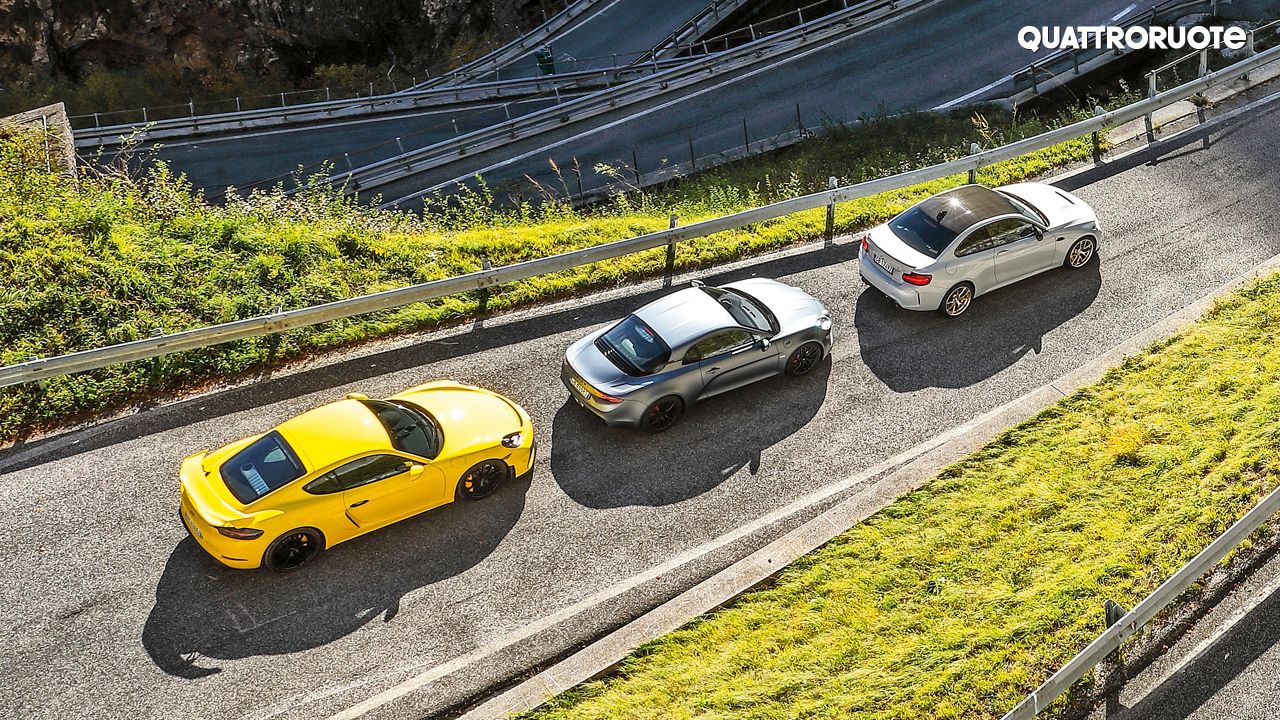 These machines are more than just a tool to get you from A to B – they are meant to soak your brain in endorphin at every twist and turn. Because numbers only partially give you an idea of driving pleasure, the rest… well, you must experience.

Before you scream bloody murder after looking at the Alpine, with just 288bhp, together with two beasts each of which has over a hundred more horsepower, let me remind you that the driving pleasure of a car is not measured by numbers.

On the contrary, the driving pleasure of a machine that refuses to be just a mere means of transport should be savoured a little at a time – like a fine wine of haute cuisine dish, especially on a fine road like this, one that’s free from traffic, full of curves, and offers you breathtaking views. And if you happen to indulge in such a pleasure, you’ll find your senses heightened as you listen to exactly what the car is communicating to you.

Okay, allow me to paint a picture. Your body is positioned comfortably in a carbon fibre cradle, which speaks to you in a language of mechanical vibrations. And when you feel your torso leaning against the seat bolsters, you realise just how effectively the chassis and tyres cling to the asphalt. And this communication between you and the machine is further pronounced by the steering wheel.

The pleasure, here, lies in entering into a symbiotic relationship with this archaic instrument, more than a hundred years old, and making sure that every input materialises exactly according to your wishes.

And finally, there is the sound, which each of these three creatures emits in their own way but to the same end – to soak your brain in a cocktail of endorphins, and other feel-good chemicals. In simple words, to make you feel that intensity of driving pleasure that you’ve been dreaming for your whole life. 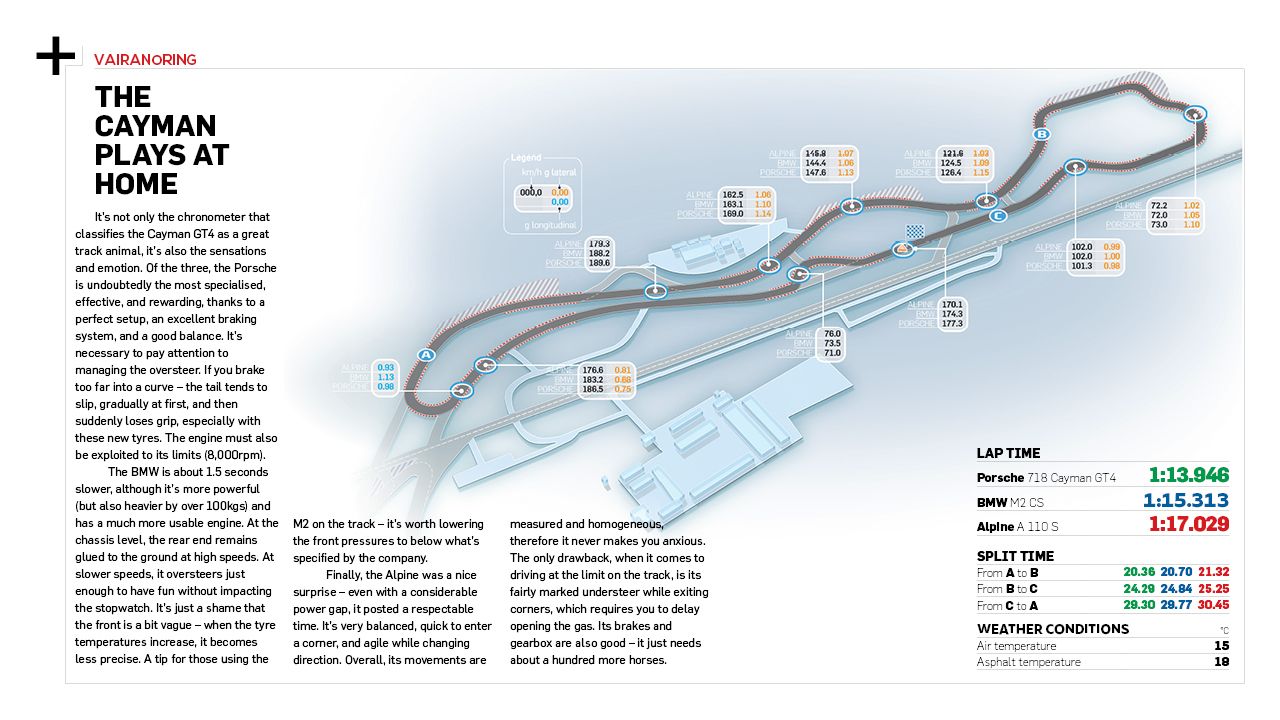 Now, to enjoy all this, you don’t need exorbitant power. Of course, horses are beautiful and precious and everyone wants to have more of them, but, frankly, they are only one part of a performance envelope. And if you want exemplary performance, it’s imperative that each of the different parts plays their individual roles impeccably. And, for that reason, in this test, where the exuberant Porsche 718 Cayman GT4 and BMW M2 CS stand out, we also wanted to include the Alpine A110 S. Also, we were certain that its numbers (a power gap of 126 and 156bhp) would be overshadowed by its brilliant chassis.

The one that we have here is the sportiest version from Renault-owned Alpine – a brand that will make its debut in Formula 1 with Fernando Alonso in the driver’s seat this year. This French coupe, in S trim, comes with a four-cylinder 1.8-litre turbocharged engine and an even more focussed chassis, with front and rear anti-roll bars that are twice as rigid, 50% stiffer shock absorbers, and wider tyres. Now, to many, all of this may not sound much, but let me assure you that they are enough.

In fact, we have already had the pleasure of driving the basic version, which is extraordinarily pleasant to drive, thanks to its rigid aluminium body and low weight (just over 1,200kgs), combined with rear-wheel drive and a mid-rear mounted engine. Its only flaw is a little too much pitch and roll, which somewhat mars the experience of driving at the limit. But the S is a completely different story, with its substantially more measured body movements, it makes you desire a handful of more horses.

The 1.8 turbo makes it a rather quick ride, accompanied by an original soundtrack, which, at low revs, reminds you of the gurgling of a carburettor engine. But the fact is that, after driving it for a few kilometres, during which you can’t help but appreciate its grip and balance, you find yourself wishing for a more powerful engine, knowing very well that more power will not break the harmony – not even a little.

The Cayman, with which the French cars shares its technical layout, tells a similar story. For this Porsche, with the rather specialized GT4 badge, 414 horses are just right. What’s more, they reach the wheel in the old-fashioned way – through a four-litre, naturally aspirated six-cylinder boxer engine, which has a soundtrack that’s great enough to be a masterpiece of contemporary music. It sends shivers down your spine, and, in fact, you have to be at the top of the rev-range to get the most out of Cayman.

And while we are on the subject of driving pleasure, let me add that it all becomes more heightened and pronounced in the CS – the most extreme version of the M2 – which is a step above the already belligerent competition. Out of the three cars featured here, the BMW is the only one that doesn’t make you wish for more power. And why would it, with its 444 horses and 550Nm of torque – numbers that seem ubiquitous throughout the sweep of the tachometer.

Explosive and supple, the 3.0-litre turbocharged six-cylinder offers an extraordinary progression. However, it would have been a perfect package with the manual gearbox of the Cayman – the Bavarian six-speed has a rubbery feel and isn’t quick enough when you want to shift like there’s no tomorrow. However, it’s not necessary to know how to do heel-and-toe-shifting – a practise sadly no longer in use – for you can leave all that to the electronics. Something that you can do in the Porsche too by just pressing the auto blip button.

If you’re not a part of the ‘save the manual’ movement, let me tell you that both cars offer the dual-clutch transmission as an alternative, something which is the only option in the Alpine. And it works well, especially during downshifting, because it accepts the gear even at high revs. Also, I found the audible warning of the approaching limiter very useful. 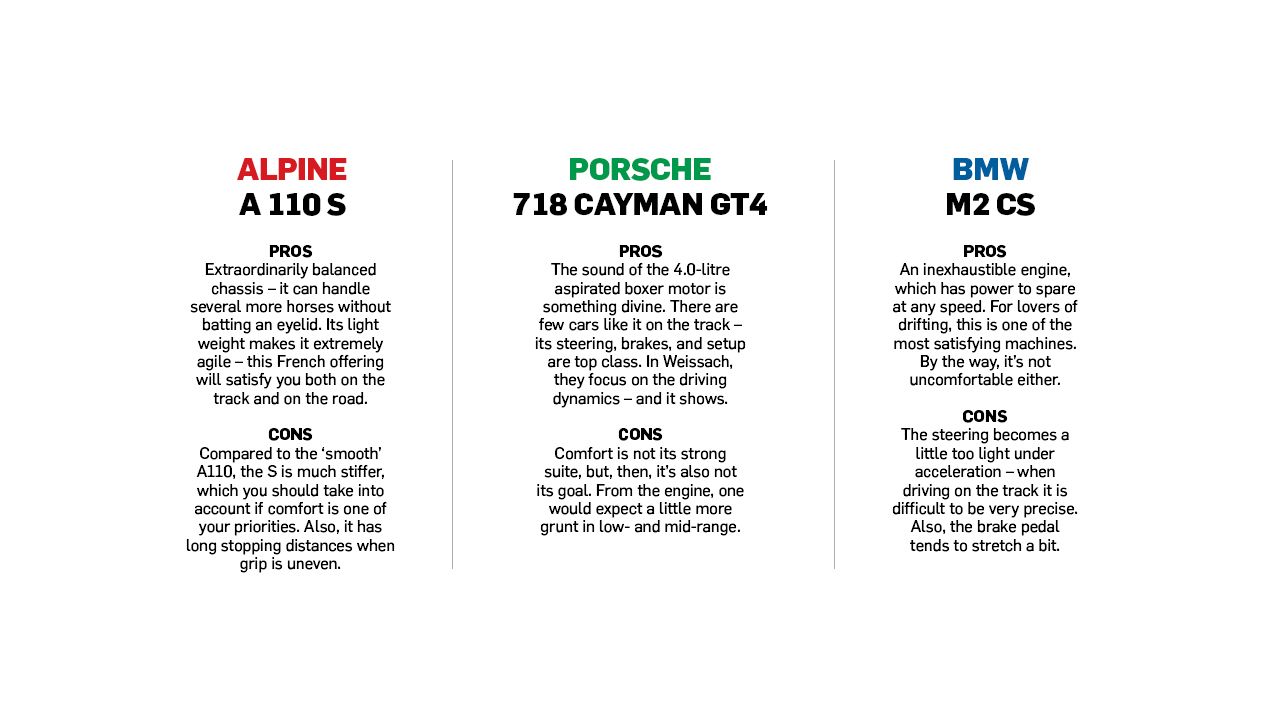 Now, the chassis is the most satisfying aspect of this trio of aces. All three of them are performance-oriented, with rather strong settings in terms of calibration and geometry (the BMW, by the way, is the most comfortable of the three), but it’s the layout that makes them a bit different.

The M2 CS is a classic front-engine, rear-wheel-drive car, with a fairly high weight (with a kerb weight of over 1,600kgs). It does not, therefore, feel as agile as the Alpine and Porsche. But this does not mean that it’s any less fun. Indeed, on the road, it’s perhaps the most enjoyable, especially for those who prefer a certain style of driving – one in which you don’t use just the steering wheel to turn but also the accelerator. All you have to do is choose the level of electronic intervention (there are the liberal MDM and all-off), and use your right foot to manage the trajectories with slight power oversteer. With a slight exaggeration, then, I think we can claim that the CS can be a perfect tool for drifting. 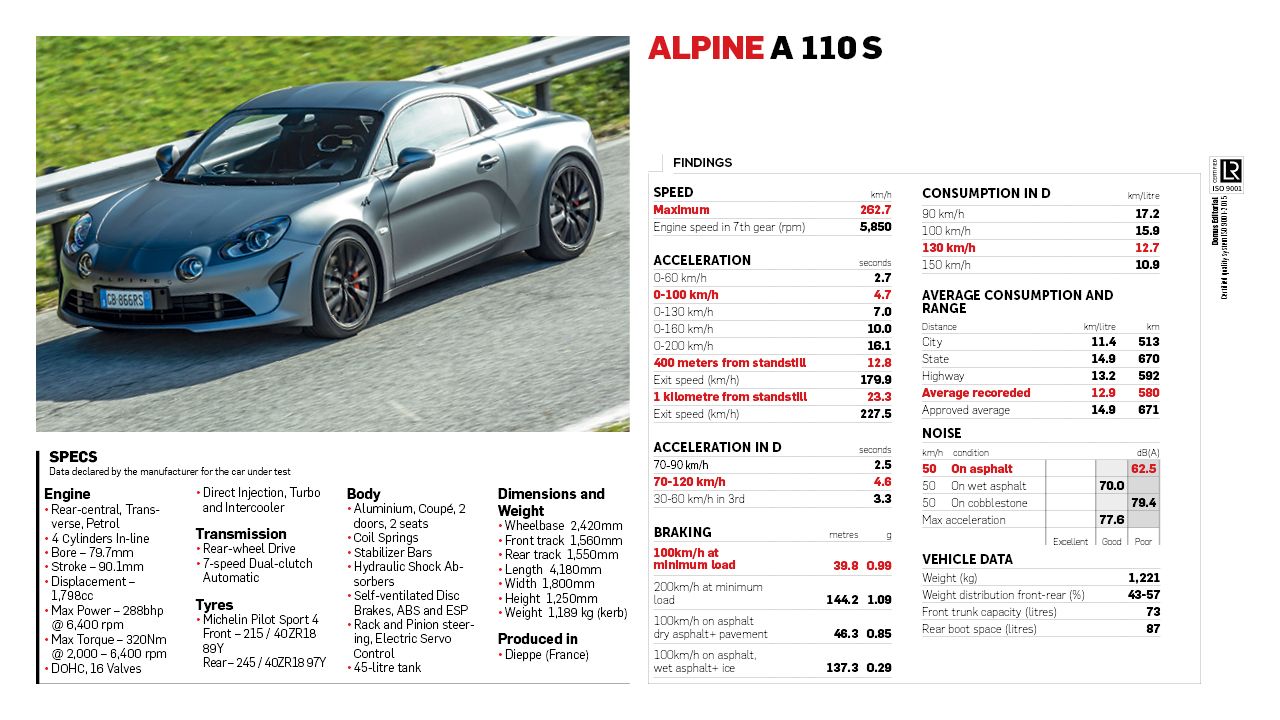 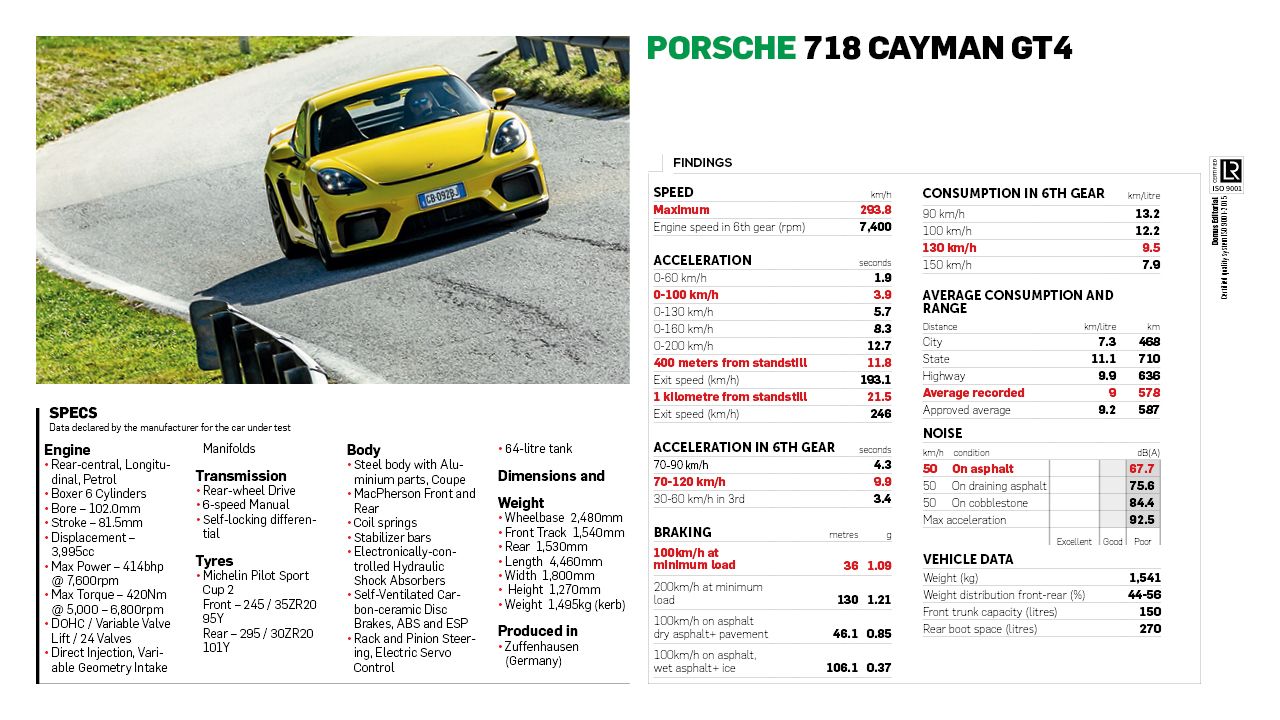 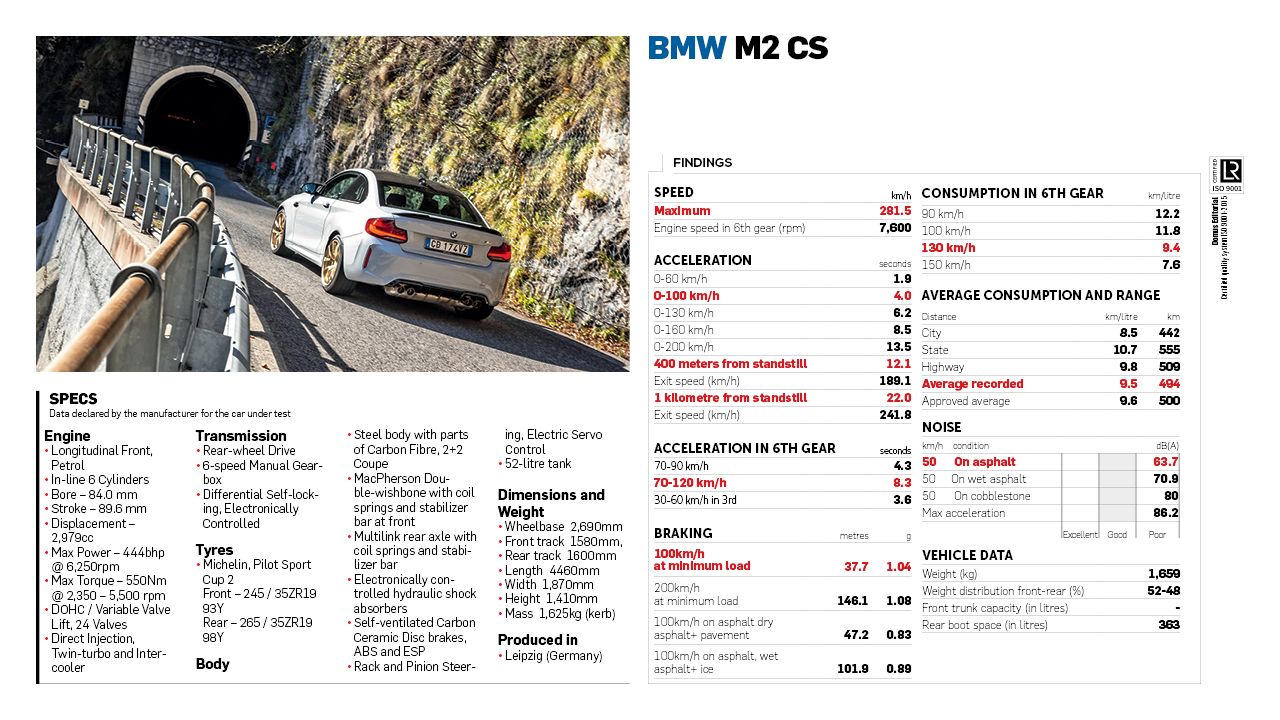 With a lower centre of gravity and a different mass distribution than that of the BMW (due to the mid-engine layout) the Alpine and Porsche allow you to drive them in a more precise and clean way. Here, you need to keep an eye out for oversteer, especially in the French car. Their strong suit is that they allow you to change directions on a whim and enter bends at ludicrous speeds – they are quick, precise, and free from understeer. 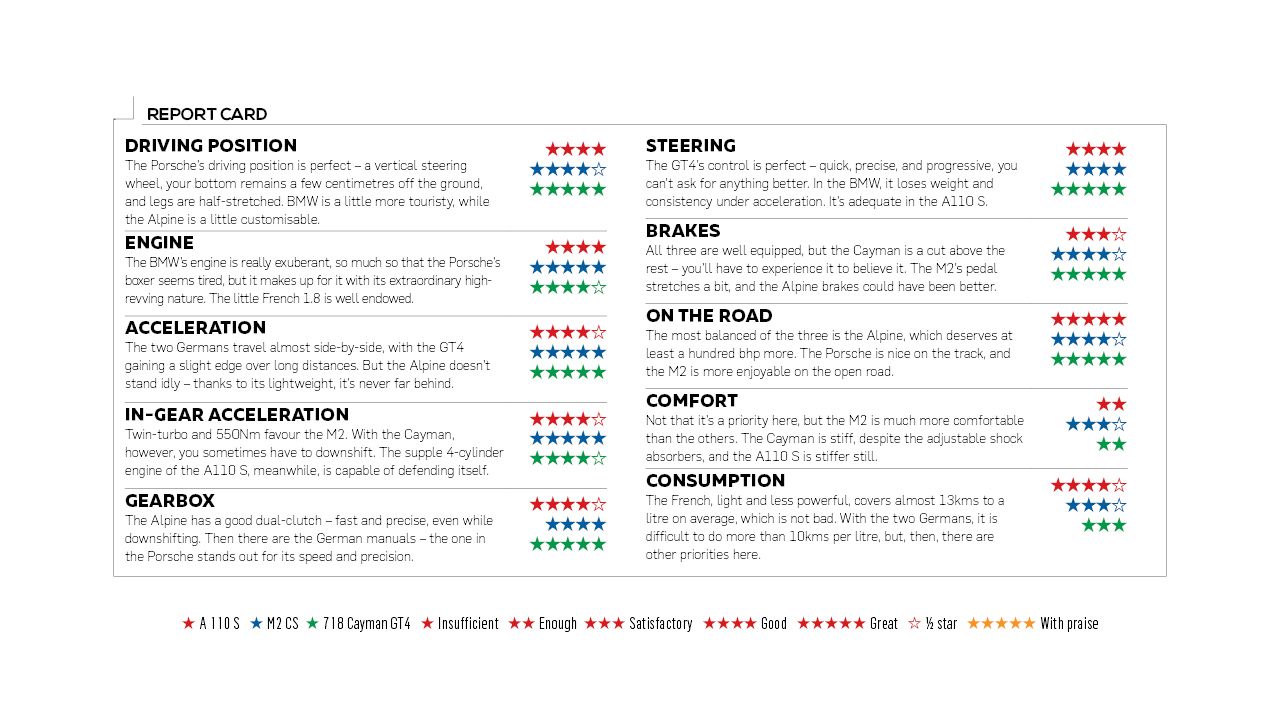 They give a feeling of lightness and great mechanical grip. They are stiff and remain unperturbed for the most part, but the Porsche has the advantage of adjustable suspension, which can be useful on not so smooth roads. In any case, with all three, a road like the San Boldo Pass in Northern Italy is enough to make you forget numbers, allowing you to revel in the sheer pleasure of driving. 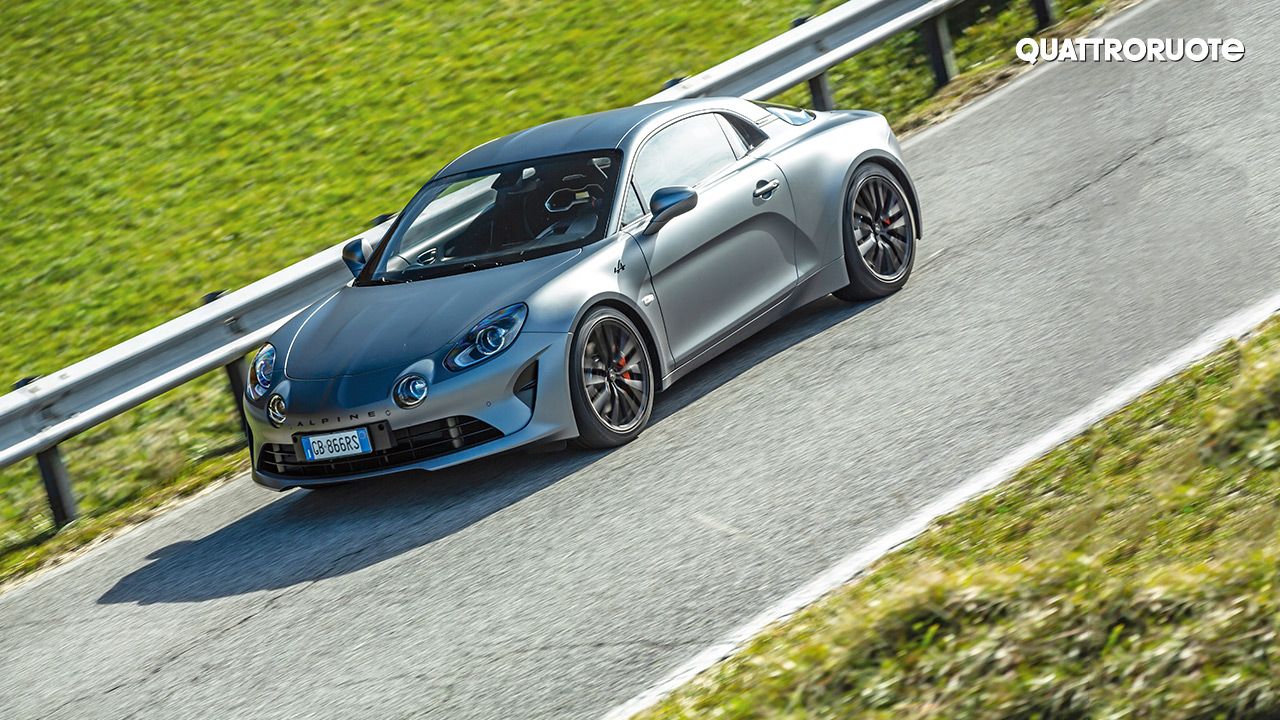 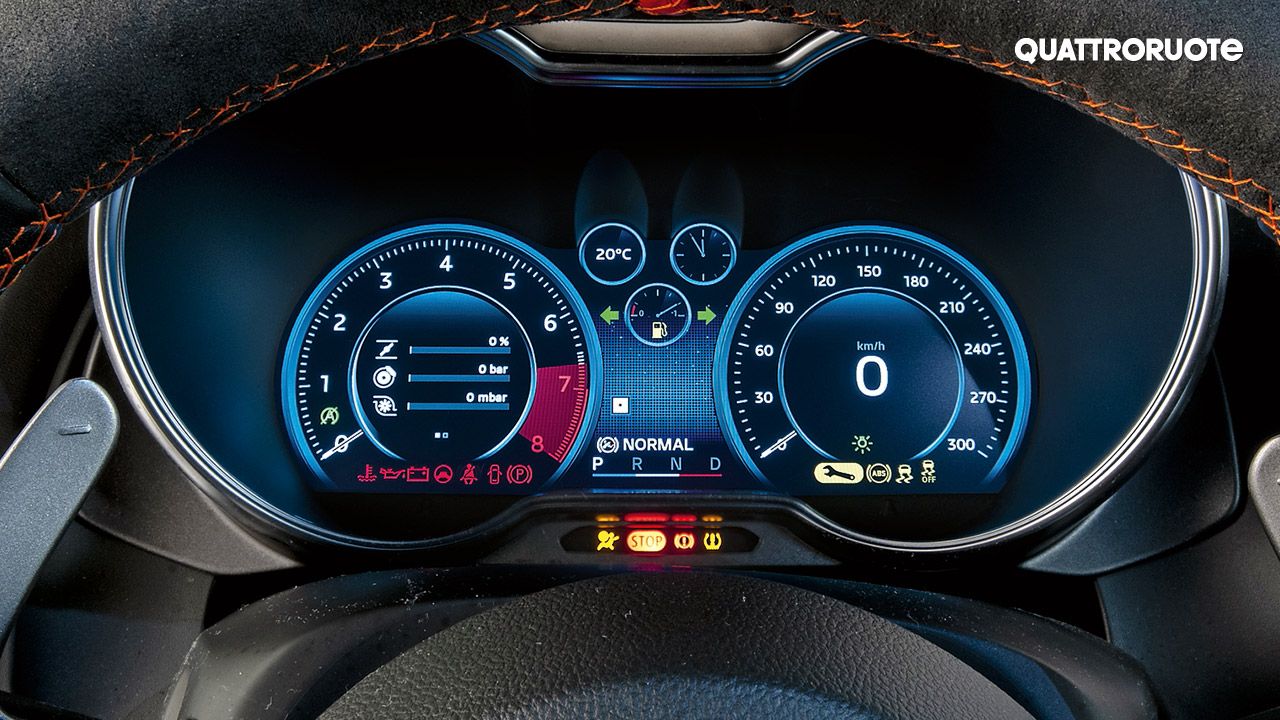 The S, the sportiest variant of the A 110, has no identifying logos – it can be recognized by the different wheels (with larger tires at the front and rear) and glossy black lettering. The digital instrumentation changes according to the driving mode. Below are the shift buttons on the suspended central tunnel. The infotainment display includes several screens dedicated to technical information and driving dynamics. 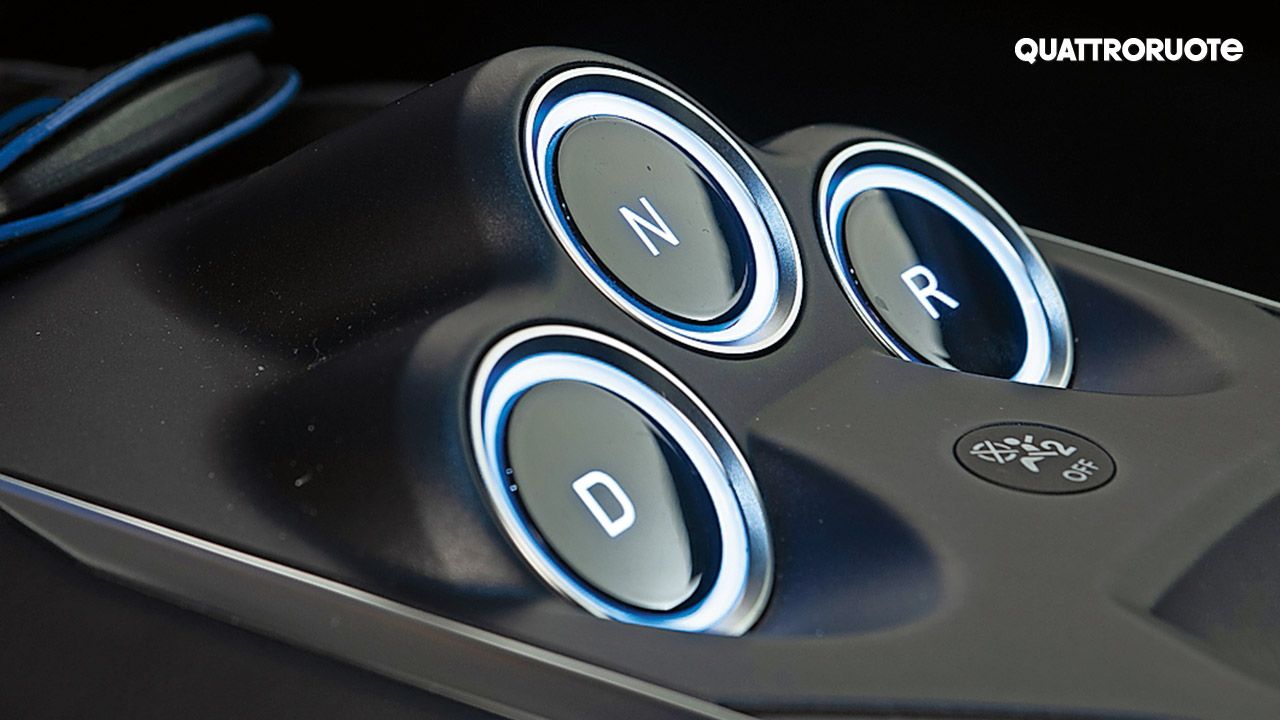 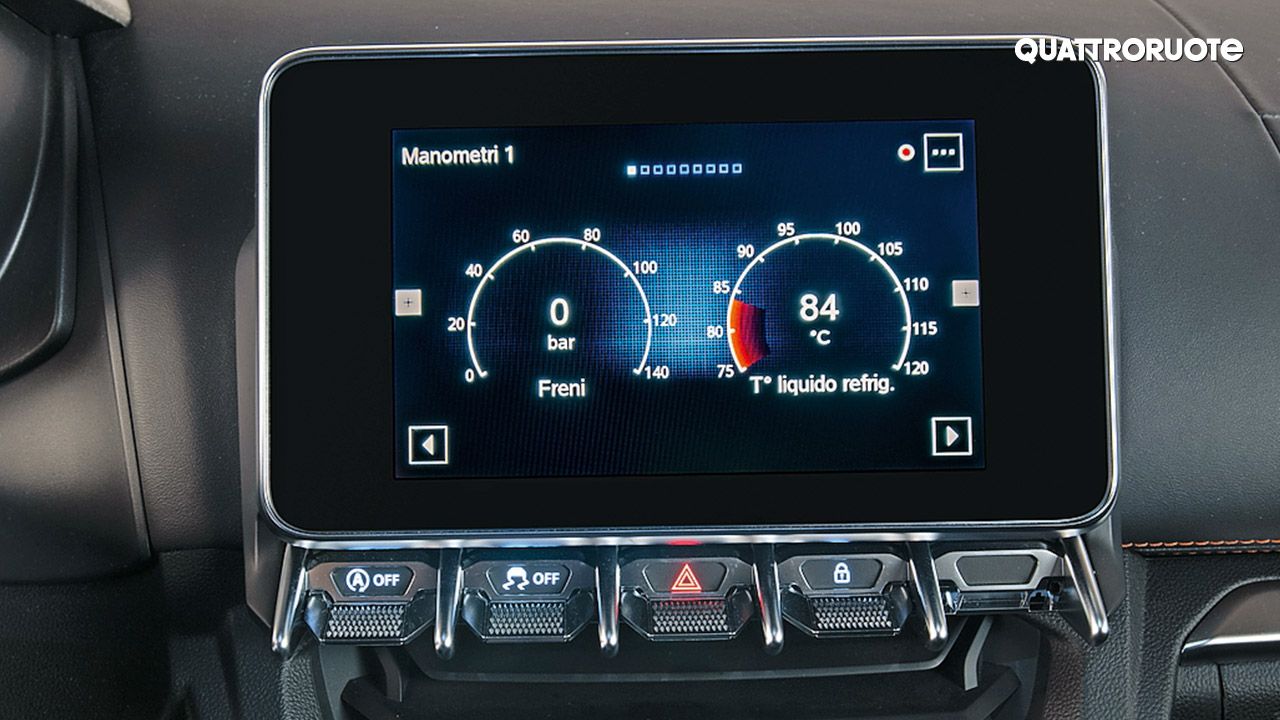 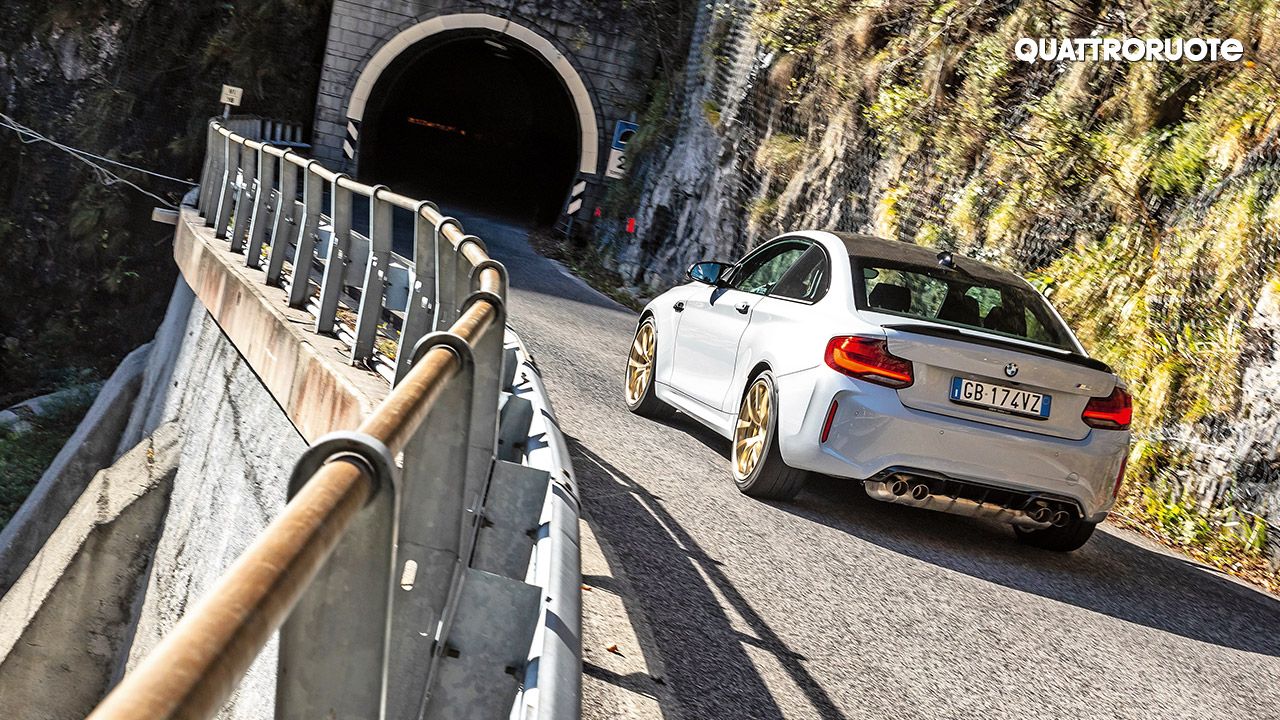 The M2 CS is a step above the competition and is marked by a few carbon-fibre elements – gurney profile on the trunk, diffuser, front splitter, roof and hood. Furthermore, it comes with M-specific 19-inch wheels and a dedicated braking system, which can be carbon-ceramic on request. 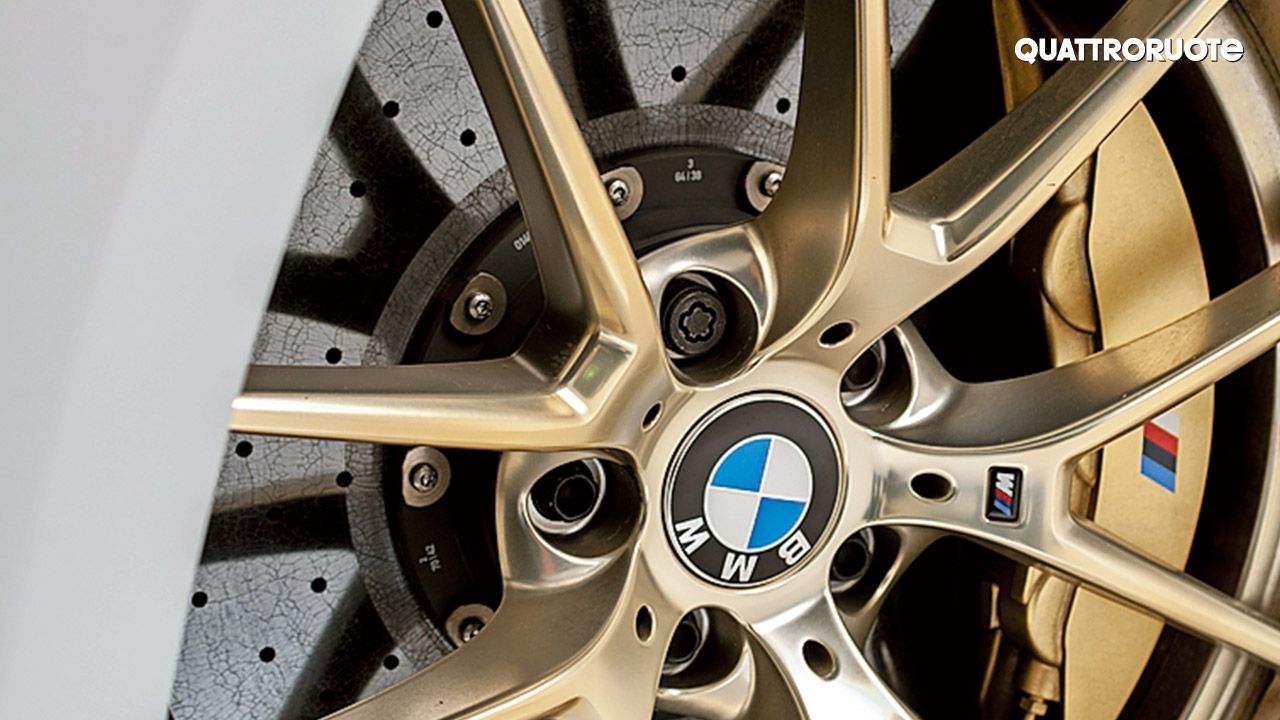 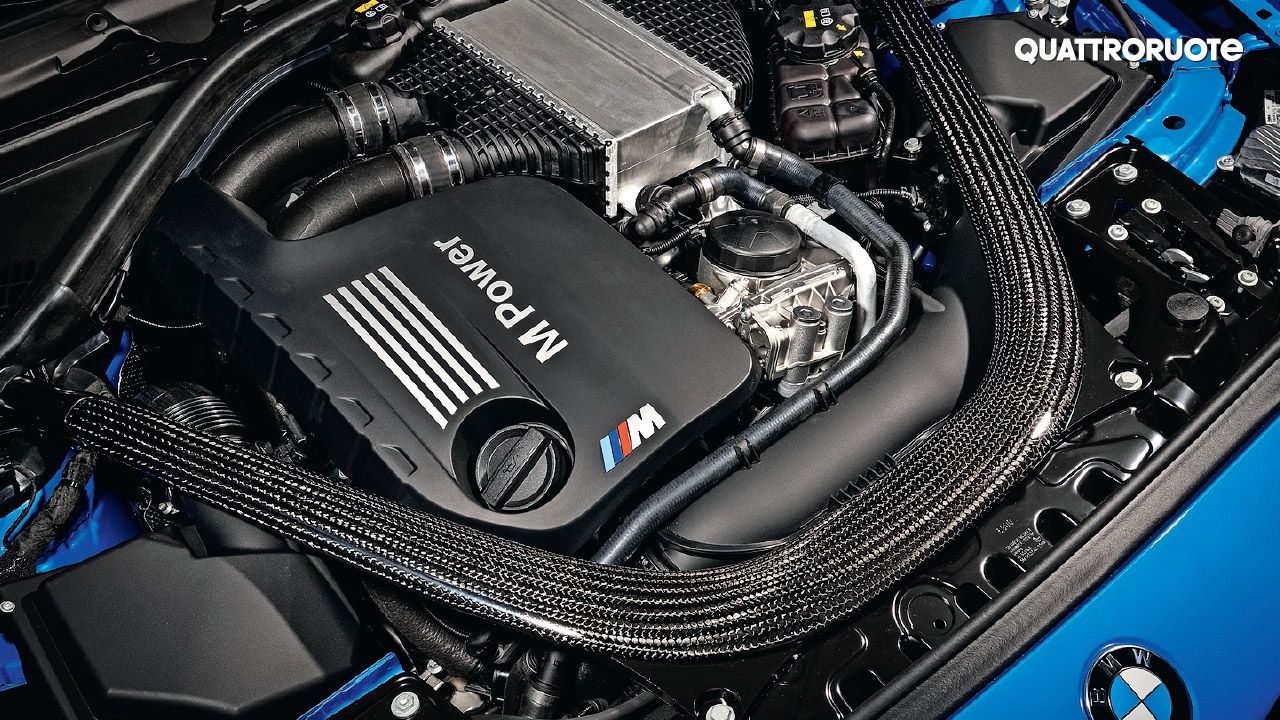 The BMW’s twin-turbo 3.0 six-cylinder produces 444bhp and 550Nm of torque. It is mated to a manual gearbox but offers an optional dual-clutch. In addition to some carbon-fibre finished elements (centre console, door handles), there are sports seats (with illuminated M badges) and a steering wheel covered in suede. 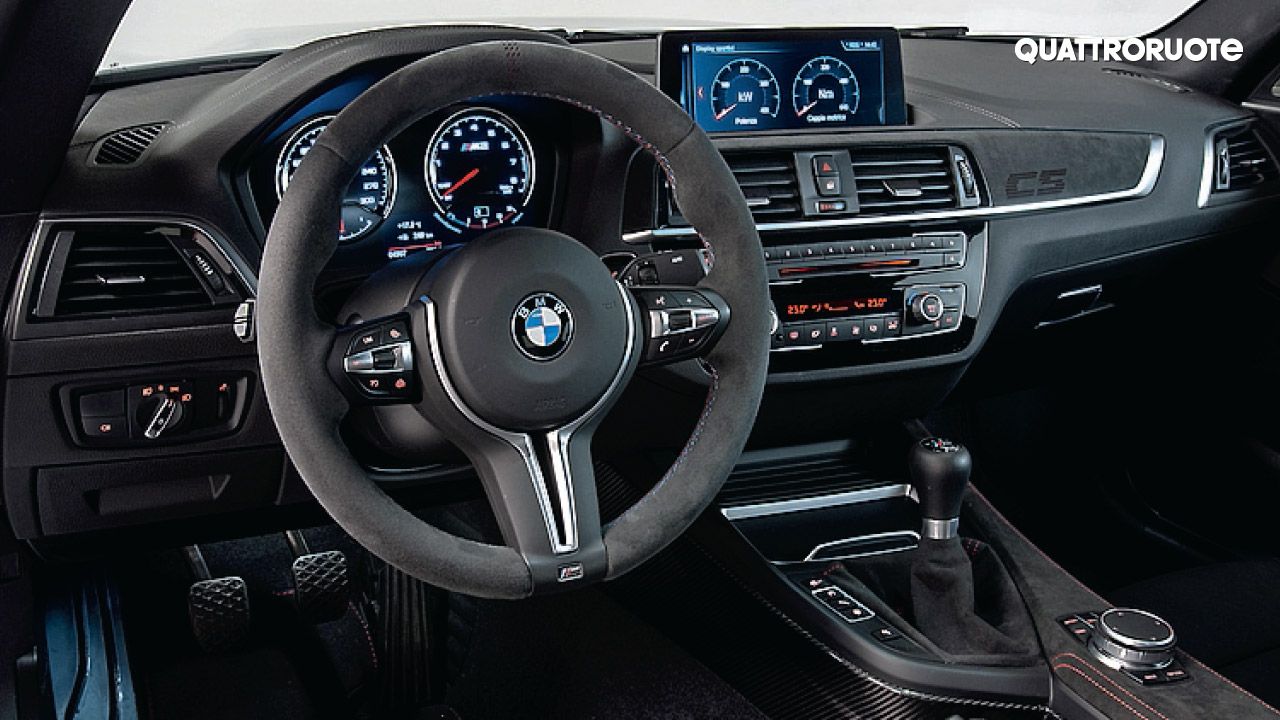 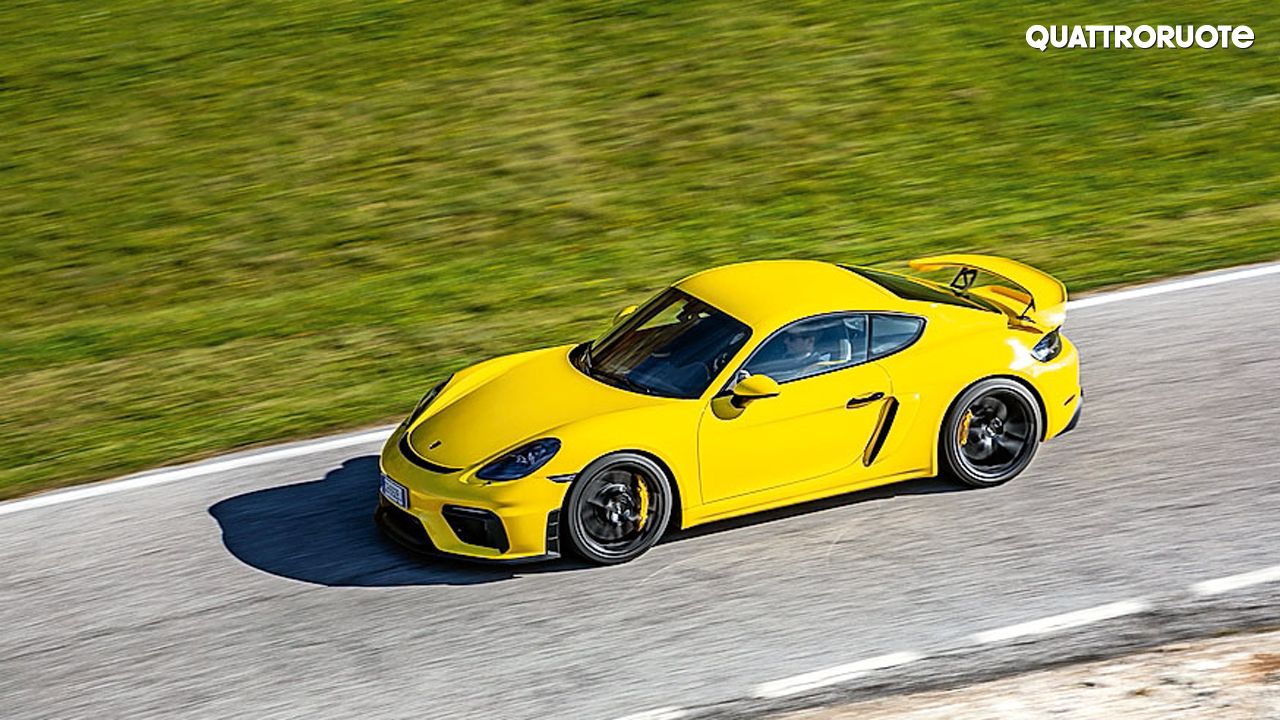 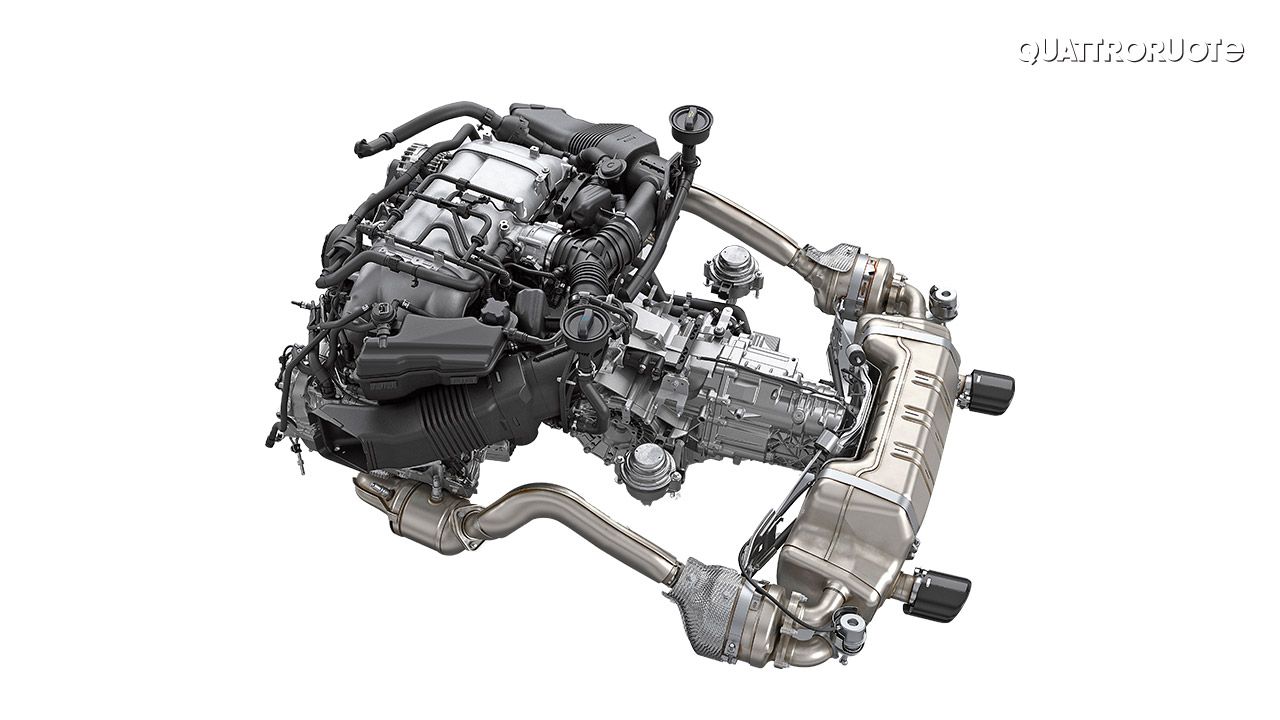 The 4.0-litre, 414bhp naturally-aspirated boxer revs up to 8,000rpm. Below are the buttons for the exhaust note, suspension, ESP and auto-blip. 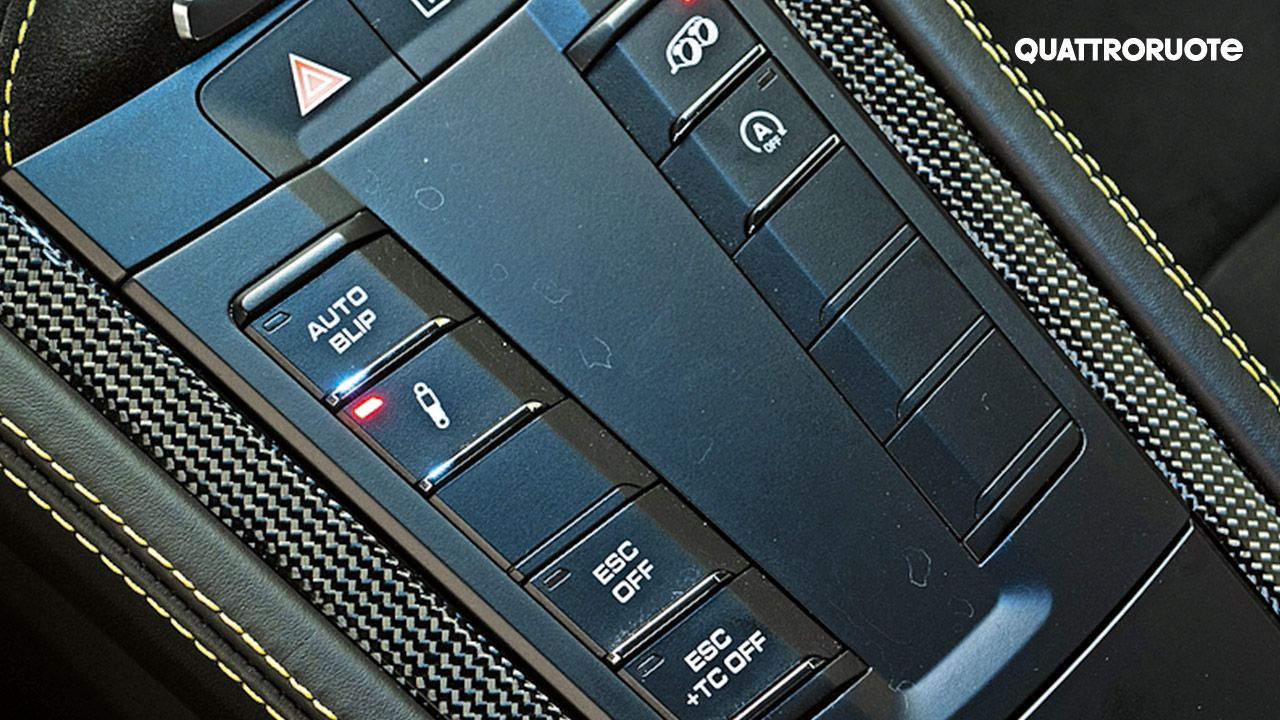