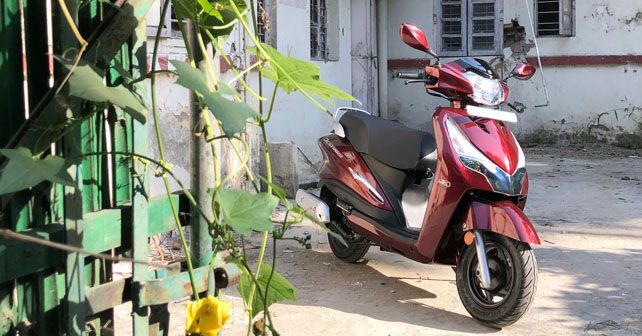 Hero MotoCorp's first-ever 125cc scooter has just gone on sale. But is it worthy enough to take the fight to its established rivals? We take it out for a spin to find out...

‘Bigger is better’ seems to be the trend in the automatic scooter market lately as there's been a barrage of 125cc scooters that has flown into this segment in the recent past. There used to be a time when you could only choose between the Suzuki Access and Honda Activa 125 (Mahindra Gusto 125? Did anyone buy it?) if you wanted a 125cc scooter, but now you’ve got the TVS NTorq 125, Honda Grazia, Aprilia SR125 and the fancy maxi-scooter Suzuki Burgman Street. Now with all the major manufacturers doing more-than-decent sales numbers every month, it was inevitable for the country’s largest two-wheeler manufacturer to join the fray. And, so, Hero has also entered the segment with the all-new Hero Destini 125.

At the launch event, the company categorically pointed out that the Destini 125 is aimed at buyers upgrading from 110cc scooters and that it’s a ‘family scooter’. You don’t, however, need Hero to tell you that because once you lay eyes on the Hero Destini 125, it’s evident that it’s not styled to be a crowd-puller that's loud decals or sharp angles. Instead, it has a restraint look that’ll appeal to a wider audience. The headlamp is a simple halogen unit and there’s no LED element in here – not even daytime running lights. Large indicators with chrome shrouds are the main visual highlight at the front, while the overall design is all about curvy lines. The scooter looks quite beefy in profile, but the exhaust unit sticks out like a sore thumb, especially when viewed dead-on from the back. 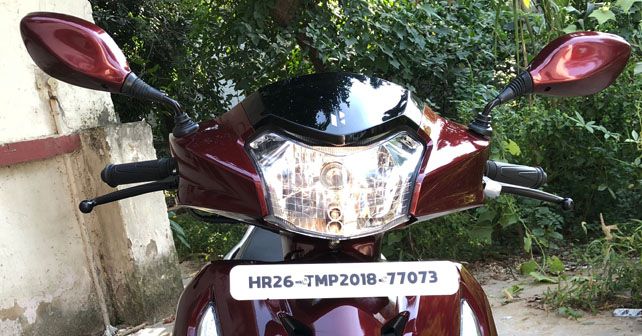 The Hero Destini 125 comes in two variants – LX and VX. And it’s the latter that we got for our test ride, meaning it had alloy wheels, dual-textured seat and body coloured ORVMs. Standard on both the variants is a semi-digital instrument cluster with an analogue speedometer and a digital readout for odometer, trip-meter and fuel level. There’s a side stand warning lamp as well. In addition to this, the VX variant gets a mobile phone USB charger and a flashlight in the under seat compartment. Speaking of the storage, it’s a capacity of 19 litres, which is decent, but you can’t keep a full-size helmet in it. That’s, however, the case with most of the other scooters in this segment. The fuel filler cap is located outside and it can be operated from the ignition key itself, allowing you to keep your backside at rest during fuel fill-ups. The quality and fit and finish are really good, and there’s no complaining about that. That said, I do think that the touch and feel of plastics is not as good as it's on the NTorq 125.

The main highlight of the Destini 125 – for me – has to be its powertrain. It’s a 124.6cc air-cooled single-cylinder engine that shares its basic architecture with the 110cc motor of the Maestro Edge – in the Hero Destini 125, it’s a bigger bore and longer stroke. The engine develops 8.7bhp of peak power output and 10.2Nm of torque. Right from the word go, the engine pulls the 111.5kg mass of the Destini 125 without any hesitation. The low- and mid-range performance is really strong and every time you twist the throttle you can feel that there’s a lot of grunt available. The maximum speed I reached was 85km/h, albeit I was riding the scooter in central Delhi, so I believe it can do more on an open stretch of road. For some reason though, the engine didn’t feel very refined and I could sense mild vibrations at speeds over 60km/h. Since the test-ride scooters were brand new, maybe the gruffness and vibrations will settle down after the run-in period.

Hero has also equipped the Hero Destini 125 with i3S start-stop feature, which saves fuel by cutting-off ignition every time you come to a halt in traffic. The standard procedure works on a 5-second cycle, meaning if the scooter is stationary for 5 seconds, the engine automatically cuts off. To get going again, you’ve to press either of the brake levers and twist the throttle simultaneously.

In the ride and handling department, the Destini 125 doesn’t disappoint either. It has a quick steering and squeezing it in and out of tight gaps is done effortlessly, which is mostly down to the fact that it rolls on puny 10-inch section rubber. And since the tyres have a high profile, too - 90/100 – they also help in cushioning the ride. That said, the front suspension, despite featuring a telescopic fork, felt a bit jiggly at speeds above 70-80km/h. The ride quality, on the whole, is pliant, without being uncomfortable or unnecessarily firm. 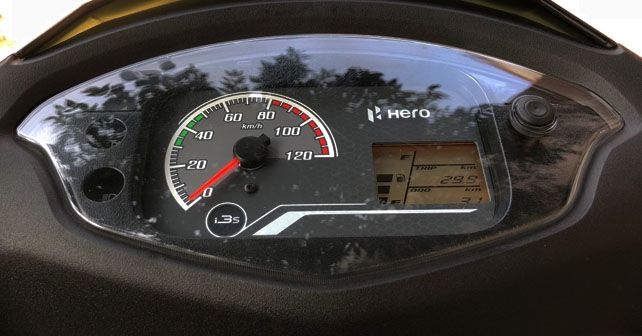 There’s no disc brake on offer on either of the Hero Destini 125 variants. Both get drum brakes and combined braking system as standard. They work well for the most part – the brakes have a sharp bite and there’s no drama or fishtailing even when you grab the levers hard. The MRF tyres that our scooter came shod with performed well, too. Surprisingly, the scooter also comes with TVS or Ceat tyres in OE spec. Hero told us that all tyres behave exactly in the same manner, so customers needn’t worry.

All told, the Destini 125 comes across as a strong package overall, especially when you factor in its pricing – the LX is priced at Rs 54,650, while the VX variant is Rs 57,500 (both ex-showroom). This means that it comfortably undercuts all of its rivals. Sure, it lacks frills and you do miss some of the modern equipment that the competition offers, but at the end of the day, it’s a family scooter. And in that regard, you can’t really wrong the Hero Destini 125. Plus, don’t forget that it’s the backing of Hero’s expansive and reliable customer support.

Nice post.Thanks for sharing knowledge with us.