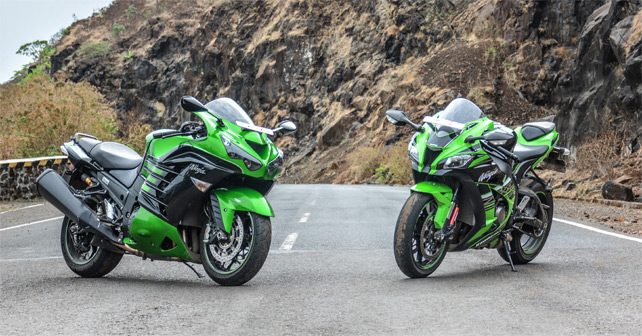 We went on a rampage with the Kawasaki Ninja ZX-14R sports tourer and the reigning Superbike champion, the Ninja ZX-10R, to find out which is the true hooligan of this duo.

What do you do when the weather sneaks up on you, Ninja-like, and threatens guerrilla warfare with rain and thunderstorms? I guess you just have to roll the dice and take your chances. Confucious says, “Everything has its beauty, but not everyone sees it.” So, we thought to ourselves, how bad could it be? But not everything was doom and gloom, as we had with us the fastest production motorcycle on the planet – after the devil incarnated supercharged Kawasaki H2R that is – the abominable Ninja ZX-14R, also known as ZZR1400 on the European circuit. But the fun doesn’t stop there. To mix things up, and make for a proper Ninja cocktail, we also had the most track focused Ninja ever – the ZX-10R, which has won two Superbike Championship titles in the past three seasons. 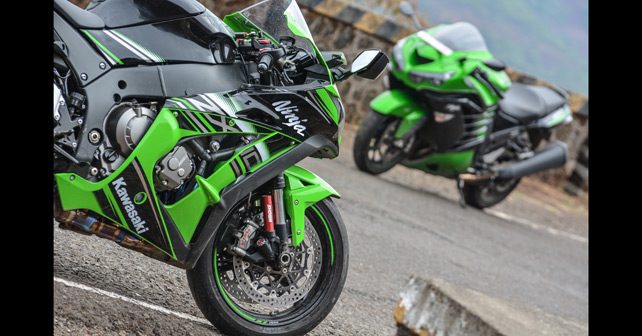 Our first reaction, Shivank’s and mine, was who’ll ride the ZX-14R first? It’s huge in every way, and I’m just 5-feet-9-inches in height. Shivank’s even shorter – and cleverer! He coolly sat on the ZX-10R, and asked, “Shall we go?” I gingerly made my way to the most intimidating motorcycle I’ve ever seen, patted the saddle and said, “I know we’ll look out of each other.” I climbed onto the long seat with ease. Thankfully, the seat height is just 800mm. I asked my colleagues to give me a minute to soak it all in, even though I could hear Shivank snickering in the back. Okay, time to roll out and head to the serpentine roads of Lonavla.

Within no time the ZX-14R made me feel at ease with its easy riding position. I had to lean slightly, but there was absolutely no pressure on my back or arms. The same couldn’t be said about the ZX-10R though. It has such an aggressive position that touring to the hills from Pune city was going to be a bit of a challenge, and I could see Shivank’s mischievous smile quickly disappearing. As we were heading out early in the morning to avoid the weekend traffic, I had the luxury to play with the throttle every now and then. Though both the ZX-14R and ZX-10R virtually have the same power output of 197bhp, it’s the former’s torque that makes it one of the fastest bikes in the world. 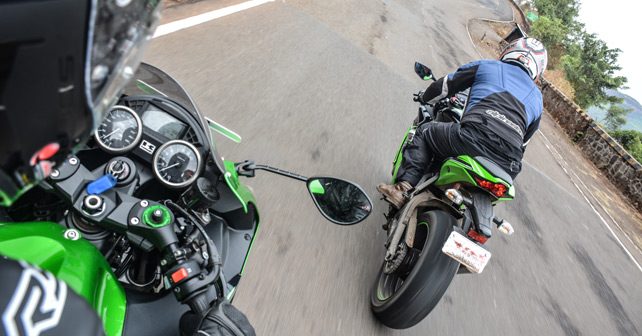 After getting the hang of this 206kg green beast, I have to admit that it’s one of the easiest sports tourers I’ve ever ridden. The beauty of it is that once you’re on the move, its considerable weight just seems to disappear. The ZX-10R, on other hand, is a rev-happy machine. Just give it the slightest throttle and it darts ahead like a nitro charged roadrunner. Comfort is not in the ZX-10R’s dictionary – it’s, quite clearly, an out-and-out track bike. Therefore, it’s all about aerodynamics. Sure, it can be a back-breaking experience, but with the sort of power it produces it can get addictive too. You actually don’t mind sacrificing your body for this kind of raw and unadulterated pace.

Both the ZX-14R and ZX-10R might come across as upgrades from the previous generation models, but that’s not entirely true. Looks can be deceptive. The ZX-10R is a completely new bike. The only thing Kawasaki has retained is its typical edgy design, but the ZX-14R gets some significant additions. After the launch of the H2, Kawasaki didn’t want their flagship bike to lose face. Therefore, it now comes with the same type of braking system as the H2R with 310mm Brembo front discs. Apart from this, it also gets an Ohlins’ TTX39 rear shock, which is tuned to ensure a very comfortable ride – but we’ll get to that a bit later. 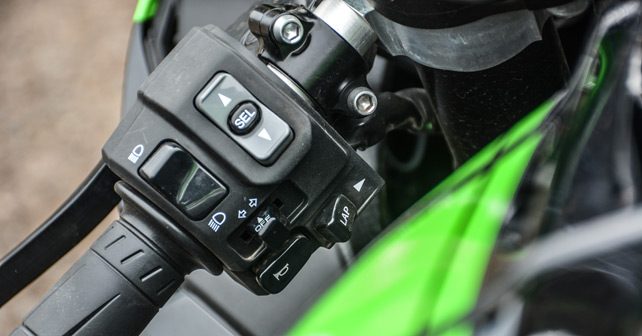 Getting back to our ride to Lonavla – with clear, wide, and flat tarmac, it was just too inviting for us not to let the Ninjas create some havoc and go on a rampage. Before I could make up my mind, our boy wonder, Shivank, flew passed me like Green Goblin on a charge. I kid you not – the only thing I saw was a green flash. Twist the throttle of the ZX-10 and the power storms in instantly. Not that the ZX-14R is a slouch in any way however. The massive 1,441cc is anything but shy when flexing its bulging biceps. It was time to let go of my inhibitions, and let this green, seemingly, alien-being take control. As I dared to twist the throttle, the response was controlled, yet compelling. Both the 998cc and 1,441cc powerplants are extremely refined machines. They pack a punch, but they aren’t attention seekers and don’t unnecessarily shout about their prowess. Before some of you get disappointed by the sound, be rest assured that the exhaust plays a mean bass once the rev needle crosses the 5,000rpm mark.

The ZX-14R was now in full flow and was catching the ZX-10R. It was quite insane how the big Ninja kept gaining speed, even in 6th gear. It showed no signs of slowing down. Also, the design and the height of the windscreen was spot on as it managed to create a bubble – which saved me from being swept away by the wind. 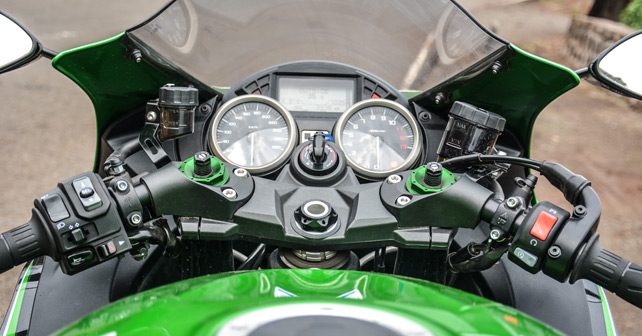 As we started climbing the Sahyadri range, or more commonly known as the Western Ghats, the ZX-14R demonstrated its nimble nature. It was taking sweeping turns without any hesitation, but, yes, it did struggle slightly when the corners got really tight. It has a tendency to push wide, and with the mass of 206 kilograms pushing against me I didn’t particularly want to test its limits. The ZX-14R’s ride quality is like a magic carpet, as it sails over ditches and soaks up any bone jarring thuds – thanks, in large part, to its Swedish-built rear suspension. Also the hydraulic clutch is so light that I could pull the lever with just two fingers. The bike is so comfortable, in fact, that I didn’t feel even an ounce of fatigue while riding it.

Half way up to Lonavla, we decided to swap bikes. Reluctantly, Shivank let go of his prized possession. The ZX-10R is a completely different machine. It’s definitely demanding when it comes to the seating position. At one point, I was wondering if I ought to lie on the tank and ride the bike. And one has to be a bit careful with the throttle, as it instantly opens up – but it is polite enough to let you feel like you’re in control. Yeah right! Capable of redlining at 14,000rpm, the mid-range is so strong that it can scare the pants out of anyone. With a lighter counter rotating balance shaft, it reduces engine inertia by 20 percent. All this leads to better engine response in the low and mid-range. Plus, the ZX-10R was far more flickable compared to the ZX-14R. It’s exceedingly stable because the steering head is now moved closer to the rider, and the engine is mounted higher and positioned further up. The electronic Ohlins steering damper adds to the bike’s stability. It also comes with a brand new five-mode traction control system, three power modes, launch control, brake control and corner management – gizmo wizardry par excellence. The confidence it gave us in the ghats was beyond imagination. Of course, it also depends on the rider’s ability to make the most of a motorcycle like this – but it never once ran wide or did anything for us to doubt its immense capability. 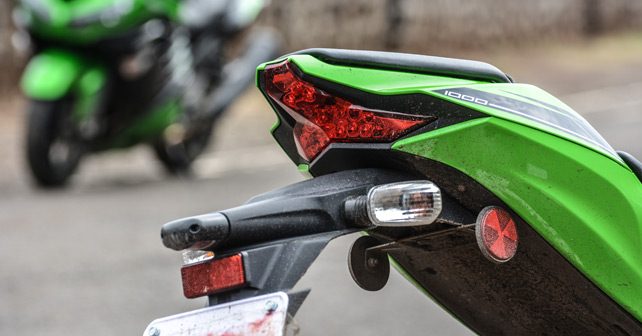 Once we reached Lonavla, though, I felt quite tired as the ZX-10R takes a lot out of you. The high foot pegs and crouching seating position makes it very demanding. The gears ratios are extremely short – making it ideal for the track – barring first gear, which is relatively tall. It is a hooligan, but it lets you play with the revs at will. On the other hand, the ZX-14R can be a bit of a sports bike but chooses to be a tourer. Its size is both its strength as well as its weakness. The handling gets compromised in the city and in tight corners, but when it comes to comfort, it’s just in a different league altogether. Both Ninjas offer phenomenal speed and power regardless.

Sometimes it’s best to just acknowledge the company of greatness rather than pick a winner. Both these bikes are manufactured for two completely different purposes. I liked the ZX-14R a bit more because it balances a relaxed riding stance along with insane power. Shivank, on the other hand, loved the ZX-10R as its sole purpose is to dominate the track and whisper with the wind.

It’s a given that you must have a huge bank balance to enjoy the company of either of these bikes, but, at the end of the day, it comes down to preference. Either way, you can’t go wrong.

X-Factor: A racer’s delight, with raw explosive power – and a wizard in the handling department.

X-Factor: Despite its imposing size, this is one of the fastest bikes out there – but one that also offers a relaxed riding stance with a comfortable ride.