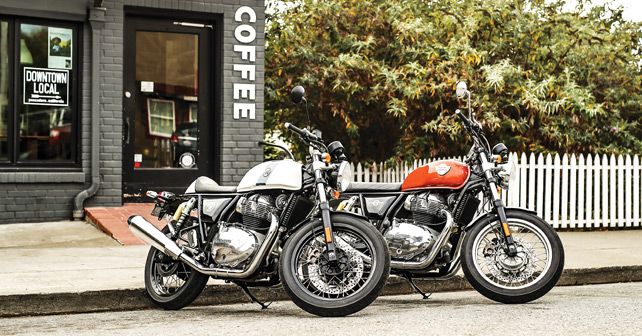 The launch of the new RE twins is undoubtedly the most exciting two-wheel event of the year. Anticipation and excitement surrounding this launch is ripe, so we ride both bikes to see if the hype is justified.

As I opened the throttle on the historic Pacific Coast highway, I realised how cold the northern part of ‘the golden state’ is in comparison to ‘So Cal’ (Southern California). I was completely kitted out in my riding gear, but the chilly wind had no difficulty biting its way to my bones, making me numb to my core. Soon, I became conscious of the fact that I couldn’t move my wrist – it seemed to have stuck on the throttle. I was going fast, too fast! And before I knew it, I was way over the speed limit. I was surprised, for never in my life have I ever gone that fast on a Royal Enfield.

On the eve of that frighteningly frigid morning ride, I dined with the RE engineers, grilling them with what they must have thought were absurd questions. One of them told me that reaching the 100mph marker on the speedo wouldn’t be a hassle for the new RE twins. This tall claim only made me more excited to ride the new Interceptor 650 and Continental GT 650. Till now, I had only seen the bikes and patiently endured the hype and anticipation that surrounded them. But, now, I was so close to riding them that my patience was giving way to an intense sense of desperation and restlessness. I literally couldn’t sleep the night before the ride. So, when I finally got my hands on the keys to the bikes, I found myself under the grip of an overwhelming anxiety with a tinge of relief – it was finally the time to get answers to all the questions that had been gnawing on my mind for some time now. How will these bikes ride? Has Royal Enfield really given us something special in the Twins? How will the engine fare? How refined are they? Well, I got all my answers, and they were surprisingly pleasant. 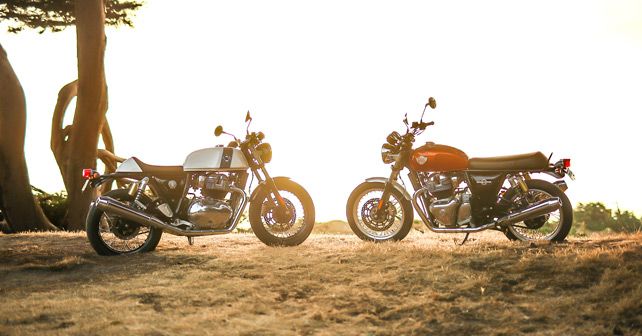 Up close & personal
Café Racers were a huge style icon of their time. And, even today, customers around the world still lust for these beautiful motorcycles. Picking up on this history and paying tribute to the original, Royal Enfield has once again brought the Continental GT to life. And the fact that Royal Enfield decided to launch their most awaited motorcycles in California makes perfect sense. Why? The Interceptor and the Continental were part of a culture movement that stood for freedom and individuality around the 60s – a time when California was also flourishing. The idea of freedom, the hippie lifestyle and, of course, the surf and beach culture have a long, historic association with bikes like the Interceptor and Continental GT.

The new bikes look magnificent and modern, while maintaining an essence of the past. The Royal Enfield Continental GT looks like a proper modern classic and a true race bike. It undoubtedly has a lot more character than the Interceptor. The quality of both motorcycles has gone up in their new compact, colourful and stylish avatars.

I was really surprised by the build quality and the attention to detail – the foot pegs have an RE logo, there’s no visible loose wiring, the frames are flawless  and the seats and handlebars are top-notch. Although the build quality is not at par with more expensive premium motorcycles, it’s a giant leap for RE. There are also a number of customisation and colour options available, if you’d like to personalise your bikes.

It’s all about comfort
These are not big motorcycles. In fact, they’re quite compact. Sitting astride the Continental GT made me appreciate its ergonomic design. The bike I rode had the custom single-seat – an accessory. A stock Continental GT, however, gets the same seat as the Interceptor. I personally prefer the longer seat of the Interceptor, for the single seat seemed hard and very narrow. Some might enjoy it, but when you have back problems like I do, comfort becomes an uncompromising priority. 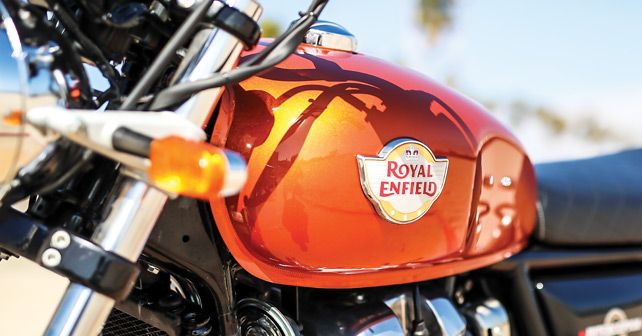 The riding position of the Continental GT is a lot more aggressive – it’s  a Café racer after all, what else do you expect? You have to lean forward, which means some weight on your wrists. The foot pegs are placed behind the knee position – something not ideal for touring, but definitely fun on twisty roads.

The Interceptor, on the other hand, offers a nice, upright riding position. The pegs are just under your knees, allowing your legs to have a comfortable right angle bend. The handlebars are positioned a little high and close to you, allowing for a more relaxed riding posture. It’s really an impressive highway cruiser.

The Twin Engine
As you turn the ignition, you’re greeted by a very unique engine sound. It isn’t loud at idle, but if you rev it up, it’ll definitely turn heads. The brand-new twin engine sits nicely in the frame. It’s a completely new unit that has been in the works for about four years now – a long time indeed, but the result is simply a work of art. The 648cc parallel twin feels quite refined and smooth. I managed to reach speeds I didn’t even think were possible. Crossing the 100mph mark –  as RE intended – was a breeze for the Interceptor. On the highway, the bike feels very calm and composed, lacking any kind of vibration or rattling. Not once did the engine feel stressed, even when it was nearly redlining. 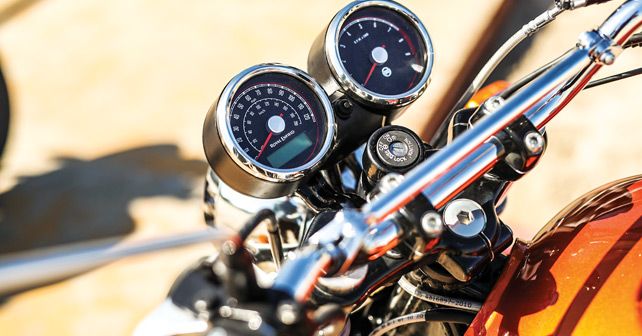 The engine is paired with a 6-speed transmission – a first ever for an RE. Again, the gearbox is very well built, and the gear lever slots each gear into position smoothly and without any effort. Around 47bhp is transferred to the rear wheel. The bikes pull quite fast, thanks to the 52Nm of torque. They don’t have blistering acceleration, however, they do feel light on their feet. The throttle is also quite responsive, and the real punch comes in the mid-range. Unlike RE’s of the past, which didn’t have much power in the higher reaches of the rev counter, the twins keep pulling forward. The power is constantly present until you cross about 7,500rpm. Both on the highway and in the city, the motorcycles have more than enough power to ensure a great riding experience.

Dancing with the twins
Both bikes handle differently, because of their different riding positions, weights and steering geometry. The Continental GT, which is more sporty, has a better feel to its front-end. The clip-on handlebars and the front leaning seating position makes the front-end of the bike a little heavy. The bike handles and behaves very well, even on fast turns. The suspension, however, feels a little soft, especially when riding extra hard. 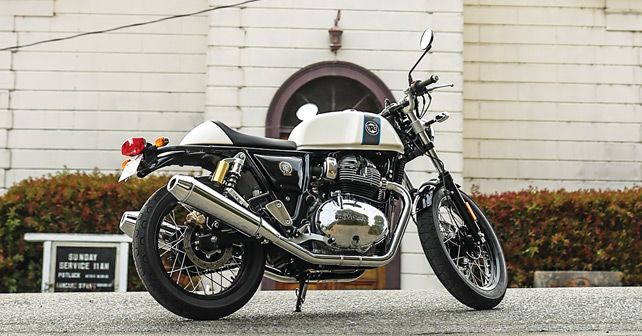 The steering setup of the Interceptor makes its front-end very light. Still, the bike behaves well on fast turns, however, its front doesn’t feel as well planted on the road as its ‘twin.’ Pirelli tyres, on both bikes, do exactly what they’re supposed to, and they do it well. However, I do feel that wider rear tyres would have been a better choice for both bikes.

Both bikes weigh just under 200 kilograms, but the weight doesn’t deter the fun of riding them. They aren’t very flickable on twisty roads, for they do require some effort to change direction quickly. While testing the twins, we didn’t encounter any broken roads – not even once – so we’re not sure how they’ll behave on Indian roads.

Another very impressive feature is ABS. The disc brakes at the front and the rear feel good and have great bite. The ABS does a fantastic job of making sure that you don’t skid during abrupt braking.

The bottom line
Yes, the bikes really did impress me. The build quality is a huge step forward, and the engine is incredibly refined and doesn’t feel like a prehistoric fire breather. In fact, it makes the bikes seem modern. Both bikes are fairly comfortable, and the overall ride quality is laudable. The performance of both bikes is impressive, to say the least. Without a doubt, the twins are impressively finished products from the RE stable.

The Continental GT is not as comfortable as the Interceptor, and it definitely won’t be practical as an everyday ride. If you want the same engine performance in a more comfortable bike, then the Interceptor is the obvious choice. These bikes lack any direct competition, and in all probability both will be priced under `3 lakh – which means that it’s very likely that the twins will be a huge success when launched in the Indian market.

X-factor: The most affordable high quality Café racer available on the planet. Performs well too.

X-factor: The most affordable, quality modern classic on the planet.