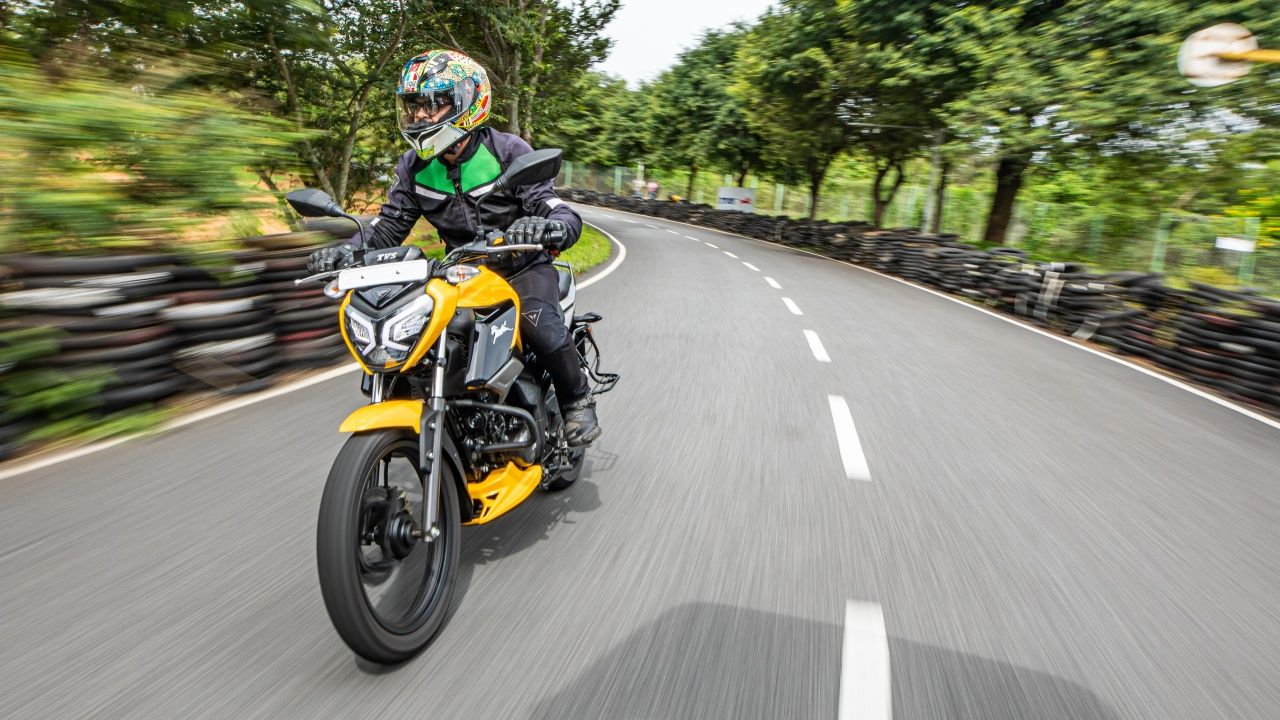 After a rather unfruitful attempt with the Phoenix 125, can TVS make a strong comeback in the 125cc class with the all-new Raider?

With the Victor 125, TVS has previously had a reasonable hold in the 125cc motorcycle space. But soon after the Hosur-based brand pulled the plug on it sometime in 2007, the brand has been struggling to make a similar impact in the class. TVS did introduce the Phoenix 125 in 2012 as a spiritual successor of the Victor, but the motorcycle never struck the right cord with the audience and was eventually discontinued in 2017 due to poor sales performance. Determined to regain its market share, TVS has now re-examined the class and bought in the all-new Raider. Should its 125cc rivals beware? 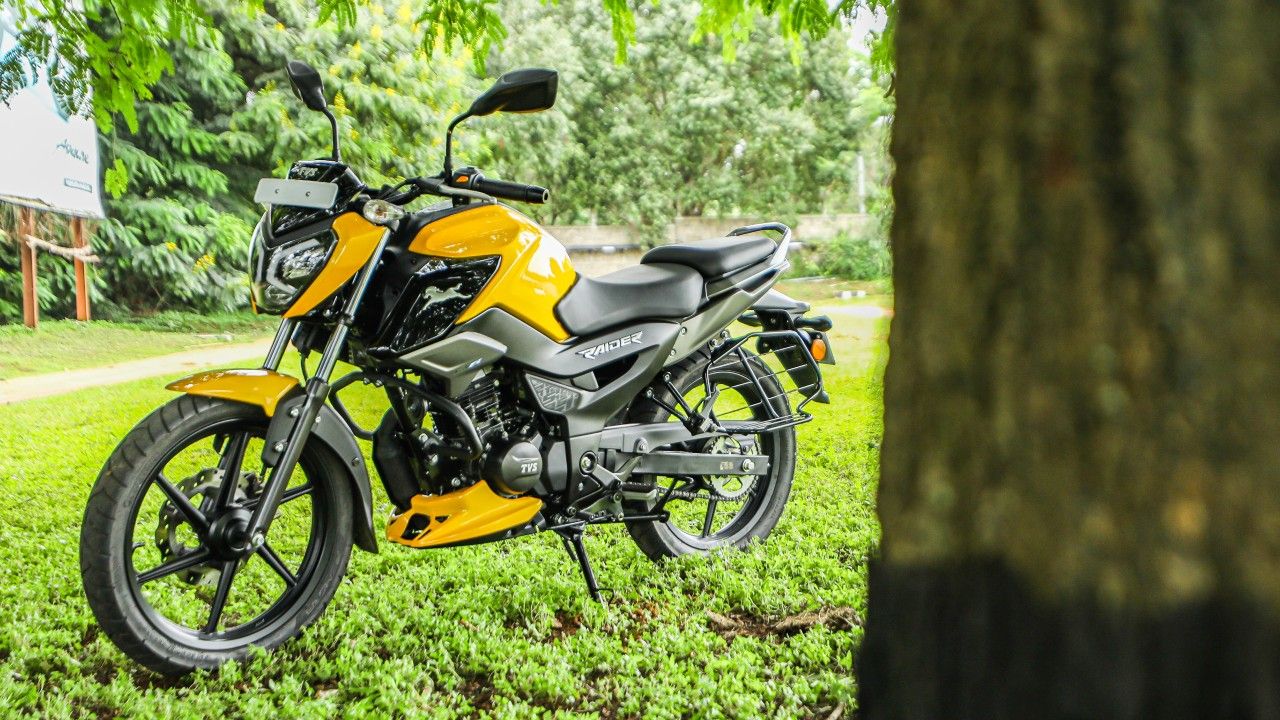 In terms of design, the TVS Raider is quite a unique looking motorcycle. At the front, it flaunts LED headlights with bold side lock-like surrounds. The C-shaped DRLs give it a prominent but personally, I am not a huge fan of the way it looks. The fuel tank makes the Raider look muscular and the gloss black tank extensions further add to its appeal. TVS has glued 3D logos on the Raider that endows it with an upmarket feel. Moving on, TVS has installed split seats to enhance the Raider’s sporty persona. The matte black exhaust gets contrast aluminum bits to break the monotony. Wrapping up the design discussion, the TVS Raider gets inverted V-y LED taillights. All in all, the Raider is a distinctive and will easily stand out among all other 125cc offerings. Coming to the riding position, the Raider finds a nice balance between comfort and sportiness. The lower half of your body is in a slightly more aggressive position in comparison to most other 125cc motorcycle, and it is courtesy of the marginally rear-set foot pegs. The upper body, however, is reasonably upright. While you have to lean in a bit to reach for the rather flat handlebar, it doesn’t quite put too much pressure on your palms and wrists. The shape of the tank deserves a special mention here. It is wide enough at the base to grip easily putting you in a confident riding position and gives you the feeling of sitting on a larger motorcycle than it actually is. The seat height, at 780mm, isn’t quite tall and you can easily put both your feet firmly on the ground. Despite the split seat treatment, the Raider offers enough room and comfort for the rider as well as the pillion.

In terms of features, the TVS Raider's top-spec trim, which will come in a few months' time will come packed with tech like the XConnect system. It will come with a 5-inch colour TFT screen that connects to the TVS XConnect app via Bluetooth which offers voice assist, navigation and more. The negative display seen on the lower variants - the drum and disc brake ones - also offer loads of information right from a tachometer and speedometer, to distance to empty and average fuel economy. 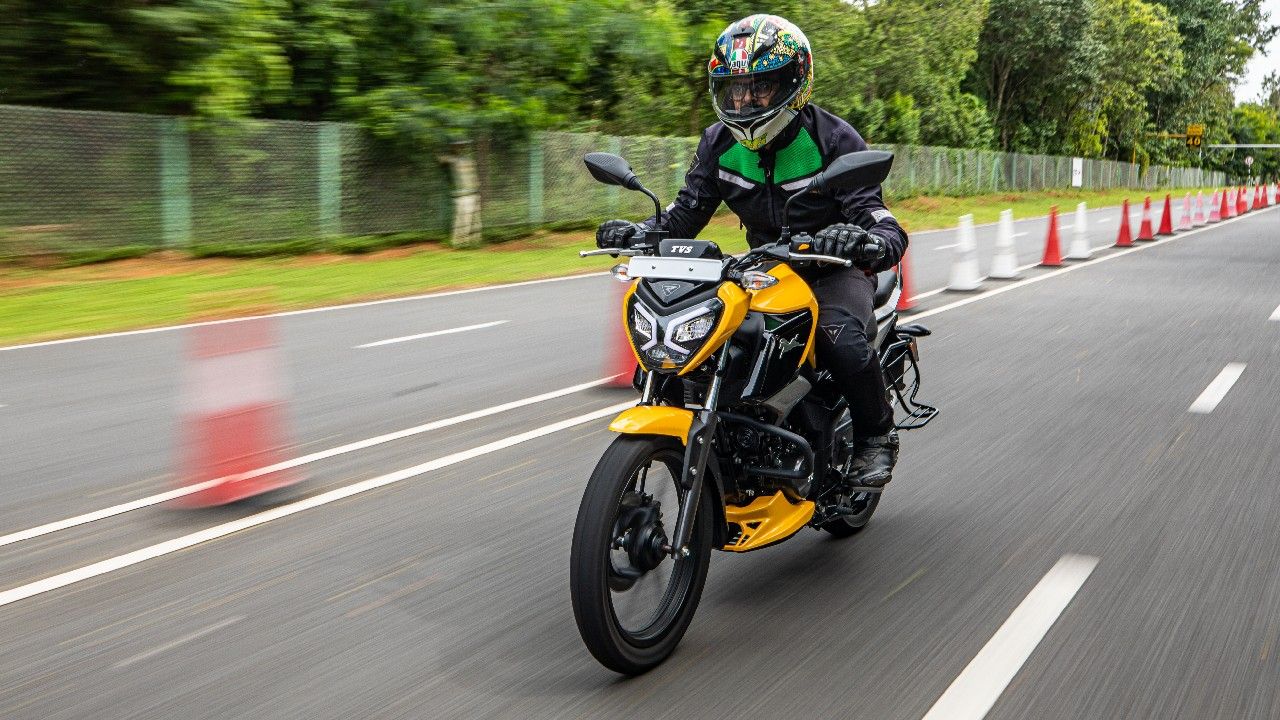 Moving on, let’s discuss the all important engine bits. The TVS Raider gets a 125 CC motor with a 3-valve head. This motorcycle makes about 11.2bhp and 11.2Nm. There is enough punch lower in the rev range and it pulls cleanly right from about 2000 rpm. There is linearity in the power delivery that is really likeable. The motor, however, only comes into its element and feels energetic once it crosses the 3000-3500 rpm mark. As far as the smoothness of the engine goes, it stays calm and composed throughout the rev range, but it starts feeling a bit vibey post 6,500rpm with roughly 80 km/h on the speedo.

As far as the acceleration goes, TVS claims that the Raider can do the 0-60km/h in just 5.9 seconds, which is pretty impressive for a commuter in this class. The Rider’s sweet spot is at roughly 75-80km/h where it feels amply comfortable, but it does go up to a speedo-indicated 102km/h if you push it further. 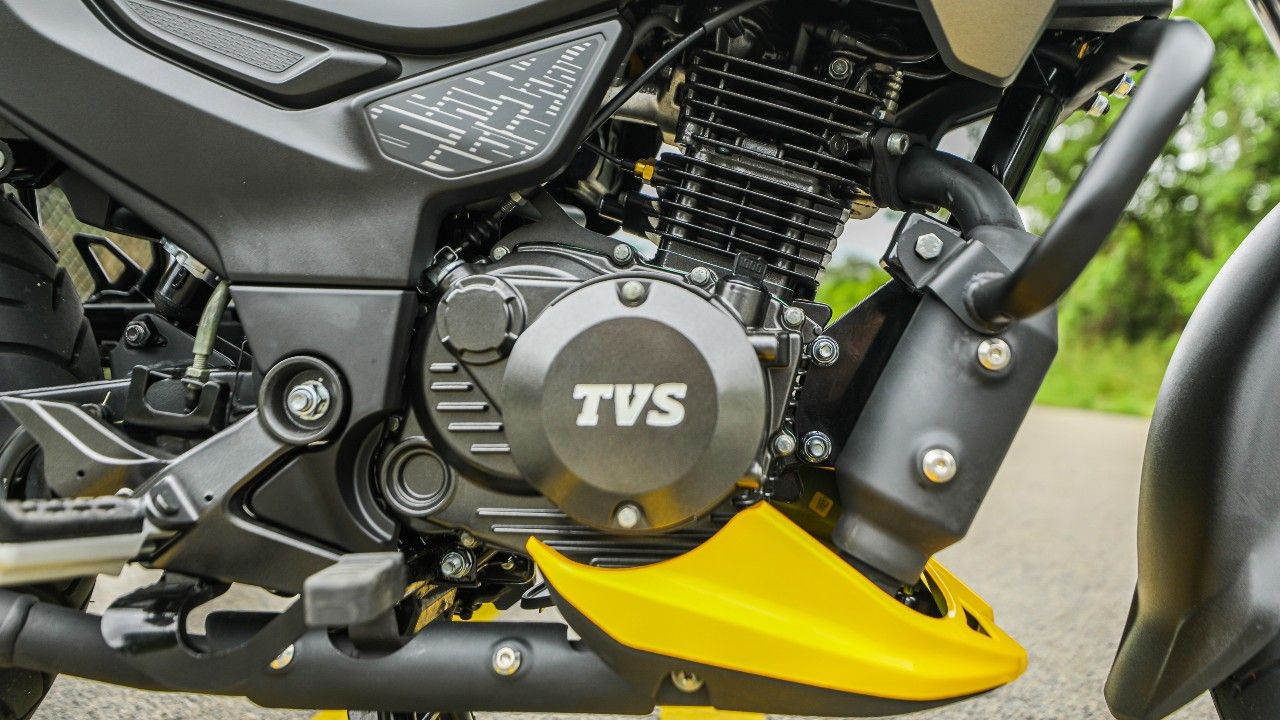 The TVS Raider comes with two riding modes – Power and Eco. You can toggle between these modes using the switch on the handle bar. Given that it is positioned where the engine kill switch traditionally is, I found myself hitting the button every time I wanted to turn the motorcycle off. The usability of the mode, in my opinion is debatable, especially given the power that it makes and the fact that there is only roughly a 30% difference in the way the motorcycle behaves. The Power mode allows you to push the motorcycle to its limit, but with the Eco mode tuned for efficiency, the engine is restricted at 7,500rpm.

The Raider comes paired with a 5-speed transmission. It performs seamlessly for the most part and shifts through the gears quite well too. When shifting from neutral to first, however, it does tend to feel a notchy and clunky. Otherwise, the ratios are nicely sorted and you can move up the gears quickly to maintain about 35-40km/h in the fifth gear – an aspect that should aid fuel economy. Speaking of which, TVS claims that the Raider will return 67km/l.

TVS has fitted the Raider with 30mm telescopic forks at the front and a 5-step adjustable monoshock at the rear. The monoshock is setup on the softer side and mid-corner bumps tend to unsettle it. With that being said, it does regain its composure pretty soon as well. The Raider tips the scale at just 123kg, which makes it eager to turn in. As far as ride quality goes, we would refrain from commenting on it given our test ride at the TVS track in Hosur didn’t allow us to put it through some bad roads. If our experience is anything to go by, it should cushion most rough roads with tremendous ease. The disc brake variant we rode had decent stopping power. The front disc performed satisfactorily but the rear had too much travel for our liking. 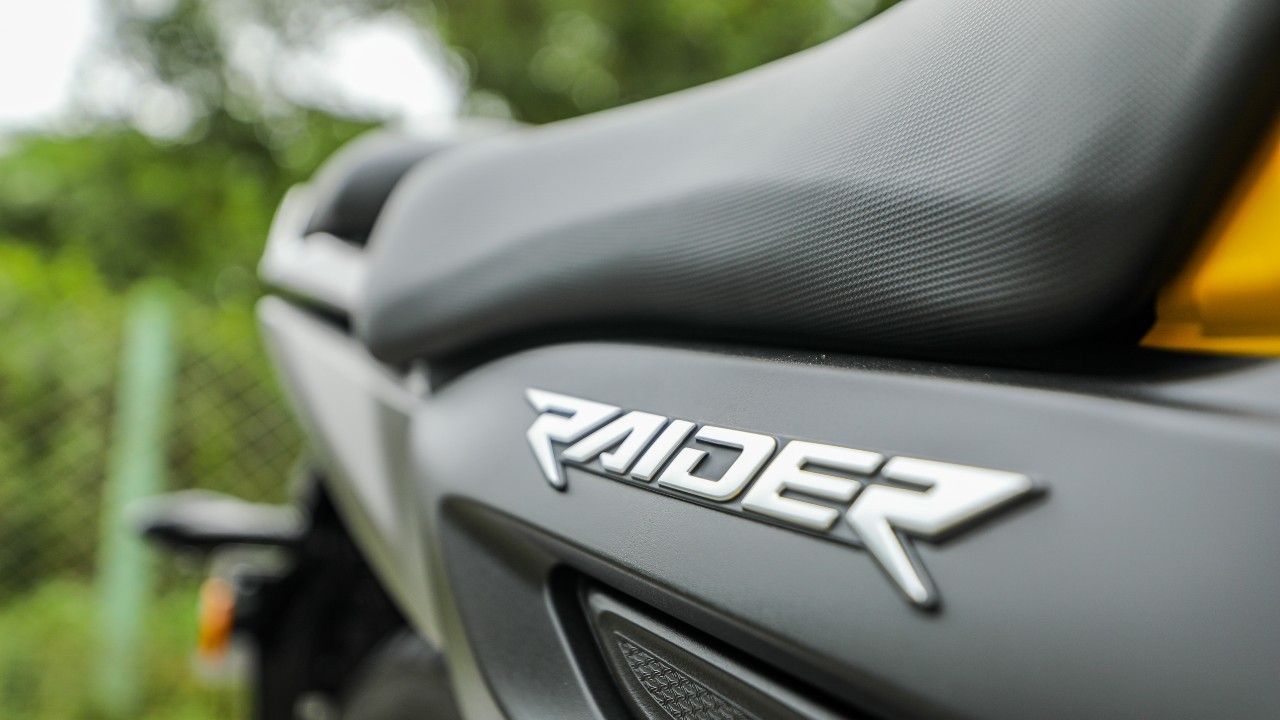 The TVS Raider is quite a unique motorcycle to enter the 125cc space. It is comfortable, packs reasonable performance and promises to be fuel efficient too. Sure, fit and finish in certain areas and stopping power could have been better, but frankly, neither of those are deal breakers. What makes the TVS Raider stand out from the crowd of 125cc rivals is its design and the list of features, some of which are unheard of in this category.

TVS has just introduced the Raider at a starting price of Rs 77,500 for the base drum brake variant. With the disc brake at the front, the TVS Raider demands Rs 85,469. While the pricing of the base trim is on par with the competition, the Disc variant is marginally higher. It does, however, makes a wee bit more power and torque and comes with a rear monoshock – something that most of its rivals miss out on. TVS is yet to reveal the prices of the version with the TFT display and the XConnect tech. Expect it to demand another Rs 2,000-3,000. While that will definitely make it more expensive than most other competitors, it also brings a bucket load of tech to the table. The TVS Raider then is sure to shake things up in its segment and set new benchmarks in the 125cc space.

X-Factor: The TVS Raider offers an exemplary package that could be the new yardstick in the 125cc class.