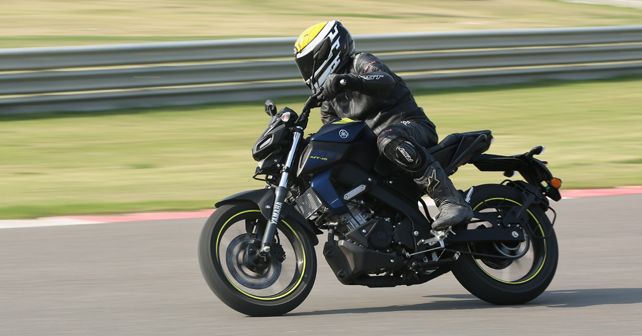 This is what you get when you strip down an R15 to its bare bones. But will this recipe of turning a full-faired bike into a naked street brawler work? We ride the new MT-15 at the BIC to find out.

Full-faired sports bikes are easy to fall in love with. This is a universal truth. You simply can’t argue against it. You see, whether you’re a pimply-faced teenager or a fully-grown man, the fact is that all of us have, at least once, fantasised about owning a full-faired speed machine. And, most of us actually do end up buying buy one. And that’s when we realise that, like every love story, it ends in a bit of a heartache.

Allow me to explain. You see, like everyone else, I wanted my first bike to be a fancy faired motorcycle – in simple words, the Yamaha R15. However, after riding a friend’s R15 for months on end for my college commute, I realised that there weren’t many corners or straights where I could exploit the potential of this mini sports bike. On the contrary, it was agonising to ride in traffic because of its racy and aggressive ergonomics.

Don’t get me wrong, I love the R15. But I just wouldn’t want one for my daily commute. And while Yamaha has refined it consistently over the years, the new Yamaha R15 V3 – although phenomenal by all measures – is still a bit too track-focussed to be used on the road, which renders it pretty useless for folks like me.

Now, imagine the R15, with all the fun and without the imperfections – would be nice, wouldn’t it? Well, that’s exactly what the MT-15 aims to be – a naked street brawler that shares virtually everything with the R15, but promises to be more comfortable for everyday use.

Evil eye
Of course, Yamaha has tasted success with the FZ series of models in the past. However, while the FZ16 and FZ25 are exciting and stylish streetfighters, they lack the punch to be outright hooligans. And this is where the MT-15 comes in. It’s not a premium power commuter, instead, it’s supposed to be an in-your-face street brawler. These beasty instincts are also evident in its design. I, for one, love its evil-looking alien face, with its twin LED DRLs and projector lamp. Plus, the overall stance is hunkered-down, which gives it a mean and purposeful look. Moreover, its stubby dimensions and chiselled body panels only make it more intimidating. 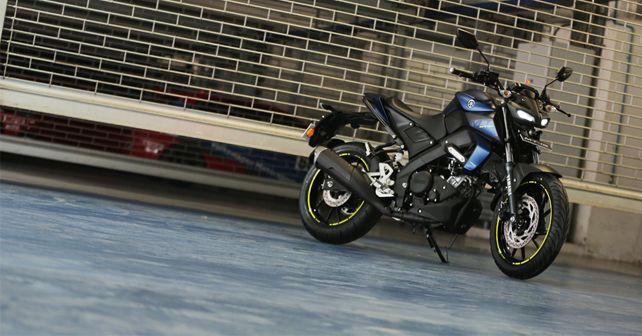 Put simply, the design is eye-catching and people will immediately notice you on this bike. The only possible grouse is that Yamaha is currently offering the MT-15 in two rather dull shades – blue and black. They look alright, sure, but the dark colours also hide its muscular design.

Features-wise, you get the same digital instrument cluster and a USB smartphone charger. However, the lack of a fairing and clip-ons means that the MT-15 feels super compact and lithe from the saddle. The rider’s triangle is, of course, more relaxed, thanks to its raised and flat handlebar. The foot pegs, however, are still slightly rear-set to allow a more aggressive and committed riding posture. Also, the single-seat has a prominent hump between rider and passenger sections, which means that you can’t really move around much. Overall, for my 5’9” frame, the MT-15 fits perfectly, but tall riders will definitely find it a bit cramped.

Powered up
The one aspect that I knew I’d certainly love about the MT-15 was its engine. And it doesn’t disappoint one bit! It’s got the same liquid-cooled 155cc unit, with variable valve actuation (VVA) as the R15 V3, and, boy, what an engine it is. The power and torque figures are unchanged, meaning you get 19bhp @ 10,000rpm and 14.7Nm of peak torque, which kicks in at 8,500rpm.

Fire it up, and it springs to life with the same thrum. There are a couple of changes though – the ECU has been recalibrated for better low-end torque for urban riding conditions, and it has a slightly flatter torque curve. The more significant change, though, is the revised final drive ratio. The MT-15’s rear sprocket is bigger than the R15’s, as it has four more teeth (52T vs 48T). Now, this makes a significant difference. In the lower gears, the MT-15 is more eager and accelerates harder.

And since the engine is smooth and revs freely, you’ll find yourself hitting the rev limiter quite often. For instance, while riding between 90 and 100km/h in fourth gear, you’ll see the revs constantly stuck around 9,000rpm. There are perceptible vibrations after you cross 7,000rpm and the handlebar gets quite buzzy, but this isn’t a deal-breaker. Overall, the engine has a lot of character, and its performance, as expected, is strong. It’s fair to say that it’s one of the best small motors in the business.

Due to the revised final gearing, and no wind-cutting mechanism, the top-speed will take a hit. At the moment, I don’t know by how much, because we rode this bike in the back section of the BIC – which is without any long straights. I expect it to hit 125-130km/h on the speedo without any real trouble, but don’t expect it to match its more slippery sibling in terms of top speed.

The gearbox is a six-speeder and gets a slipper and assist clutch, just like the R15. Shifts are precise, and working the transmission is a delicately smooth affair. All told, I believe this combination of a punchy engine and gearbox is going to be the main draw of the MT-15. It’ll keep mature as well as enthusiast riders entertained all the time. The powertrain is just so perfectly balanced.

Handle without care
Since the MT-15 shares the same underpinnings as the R15 V3, it was a given that it’ll be excellent in the handling department. And that’s indeed the case, however it does the job in a slightly different way. First, let’s talk about the hardware – the deltabox-frame and suspension setup are identical to the R15 V3, which means that even the MT-15 gets a conventional front fork instead of an upside-down fork on the international-spec model. However, compared to the R15, the wheelbase is 10mm longer. The trail, however, is identical at 88mm. 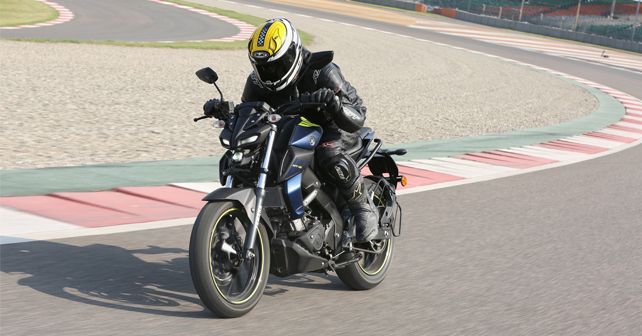 Right from the get-go, it was evident that the MT-15 has sharper and quicker steering, courtesy of its light-front end. On the whole, it’s 4kgs lighter (at 138kgs) than the R15. However, in terms of feedback, it definitely isn’t as communicative as its faired sibling. But the inherent goodness of the R15’s chassis is visible when you go hunting for corners. The MT-15 remains supremely stable around turns. The damping on both ends feels perfectly calibrated for the job, while the MRF tyres grip well too. Under hard-braking and before corner entry, though, the rear does tend to get out of shape at times if you’re not careful. And quick switchbacks can be unsettling, which can be blamed mostly on its restrictive saddle space and super quick steering.

Now, the problem here is that we tested the bike for around half an hour on a racetrack, which is ironic because it’s not really meant to be ridden on a racetrack! However, what this did tell us about the MT-15 is that it will be a nippy and agile daily rider. I can’t say if it would blow me away on the street, but I do get the sense that it’ll be super fun to ride every day. Similarly, I can’t comment on its ride quality right now, because, well, the BIC doesn’t have any potholes or undulations, you know…

Braking duties are carried out by disc brakes on both ends, and their performance is satisfactory. The bike comes to a halt exactly where you intend to stop, but the front lever does lack bite. Surprisingly, the MT-15 gets single-channel ABS, as opposed to the R15’s dual-channel system.

Verdict time
The idea of an R15 with a naked body is a good one – you simply can’t go wrong. The MT-15 has the character of its racy sibling, but it’s something that most of us can happily and comfortably ride all day, every day. The quality of the parts are top-notch, and it rides and handles like a quality motorcycle.

So, should you buy one? Well, you see, its pricing is going to be a real dampener for many people. At `1.36 lakh, it’s only 3,000 rupees less than the R15. However, what one must understand is that the MT-15 is aimed at a completely different group of riders – those who want the same levels of performance and sophistication as the R15, but in a slightly more relaxed manner.

So, I don’t think its high price-tag will be a deal breaker. What might really get prospective buyers thinking, though, is the fact that the market has more affordable options, like the TVS Apache RTR 200 and Bajaj Pulsar NS200. And that’s where life may get difficult for this new baby MT.

X-Factor: A lithe and mean looking streetfighter that has the heart and performance of a sport-bike. A winning combination if ever there was one. 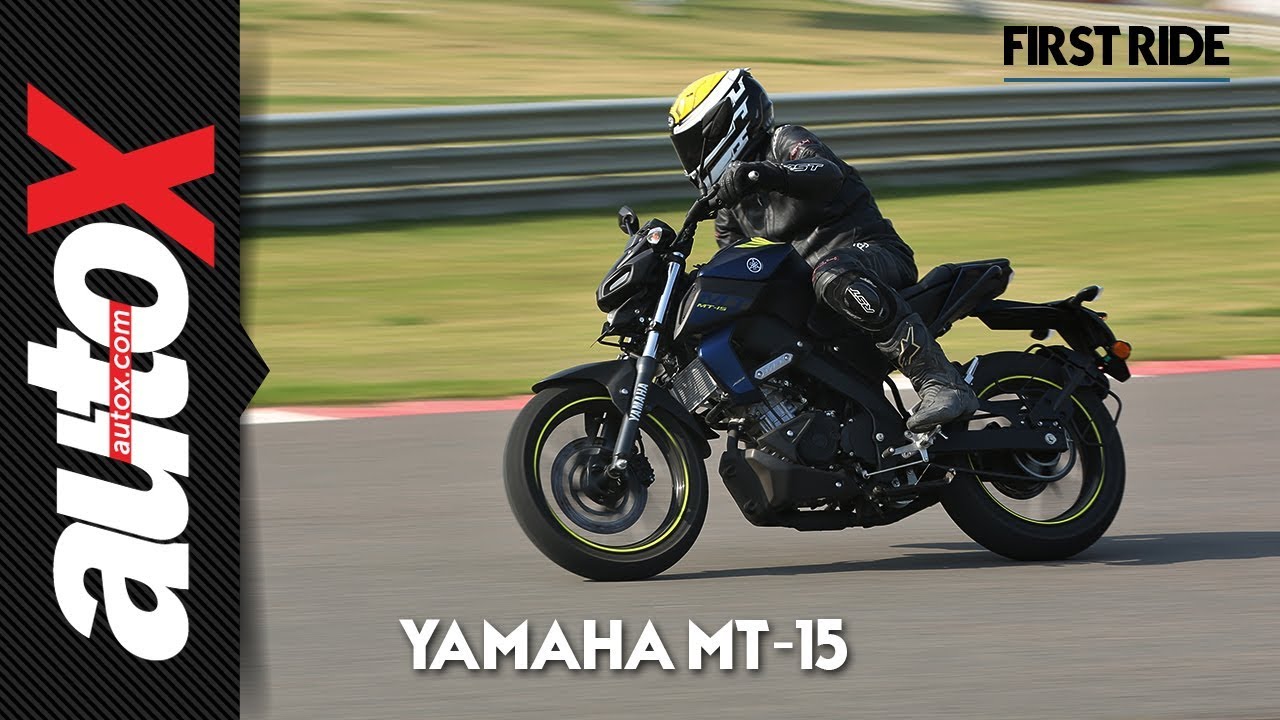 Is it suitable for tall riders..??