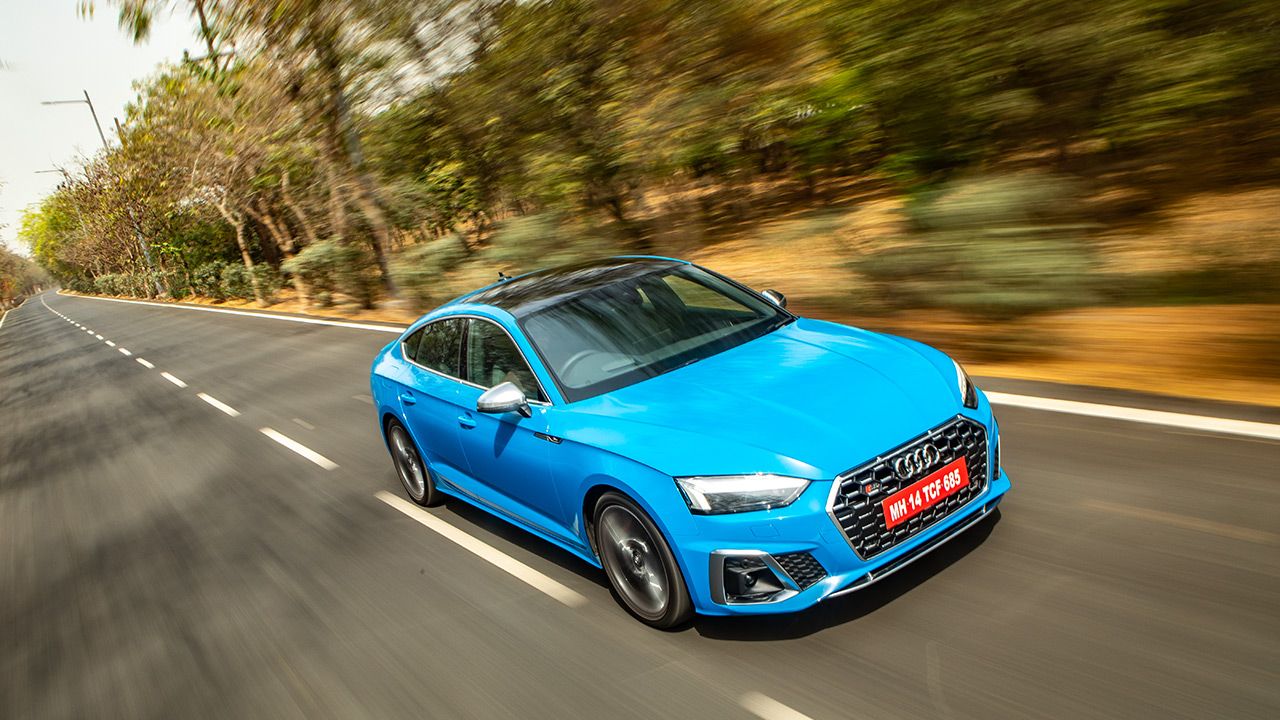 The Audi S5 Sportback is back in India with more swagger. So, is it still the best mid-tier performance car with enough style and comfort?

Sweet. Sexy. Sporty. Sumptuous. Sublime. If you ask me, these words perfectly define the new S5. A practical four-door coupe, or Sportback as Audi likes to call it, that’s stunning to look at and plenty quick for our roads, or even for our racetracks for that matter. Plus, it’s as luxurious as they come.

Well, it seems like I have just spilled the beans before even ‘reviewing’ the 2021 Audi S5 properly. But believe me, there is a lot to say about the new S5 after driving it for a couple of days. So, let’s just get down to business.

The current-gen or B9 S5 has been around for quite a while, and this one is no different, except for the fact it's the 2021 version, with a mid-life makeover. Unlike other facelifts, it's not a mild update though. The refreshed S5 looks more radical than the outgoing version. Upfront, there’s more aggression, thanks to a flatter single-frame grille with chrome inserts and a new and menacing pair of headlamps that house Matrix LED lamps and re-profiled DRLs. There’s a new bumper with larger air-inlets along with gloss silver detailing. The side profile is unchanged, meaning it still rolls on tasty 19-inch alloy wheels. I also absolutely love the sharp shoulder crease that runs from the tip of the headlamp to the rear fender – it seems as if the car is flexing its muscles. At the rear, the tail-lamps have been reprofiled, and there are quad-exhaust pipes and an updated diffuser insert. 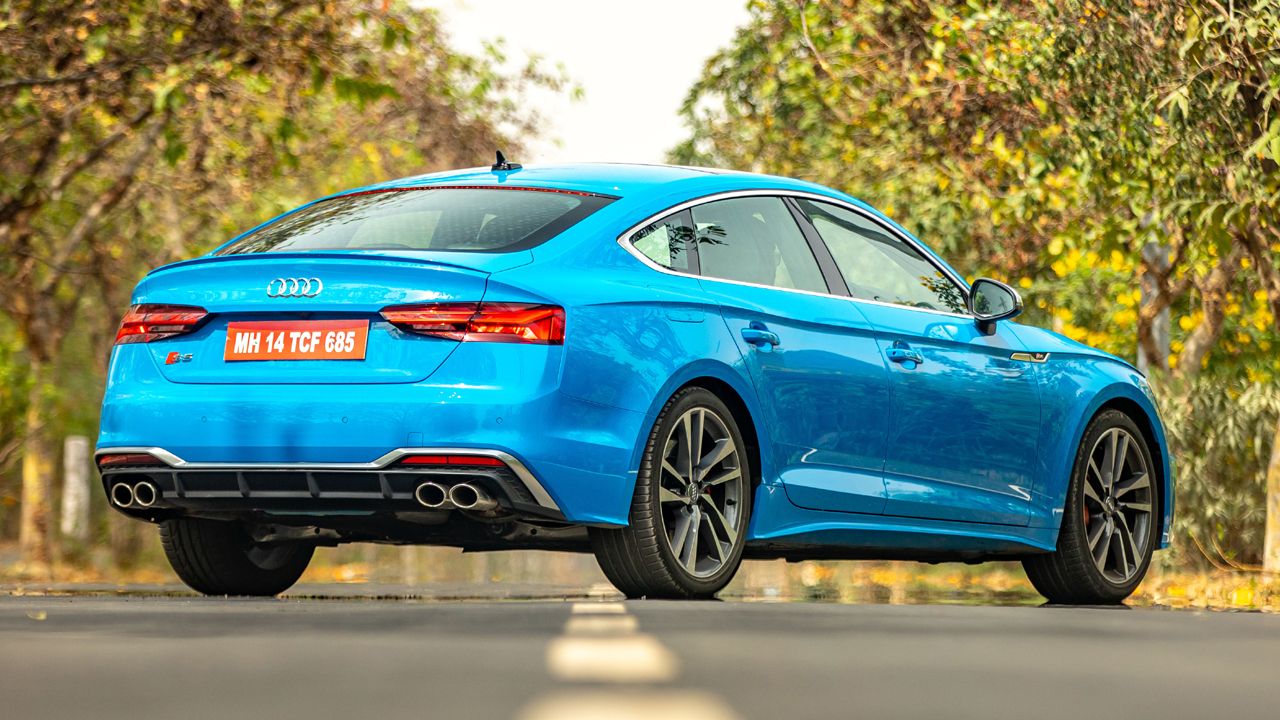 You don’t need to be told that the S5 has always been a looker, but with the current update, it looks even more stunning. To my eyes, it’s one of the best four-door-coupes out there in terms of design and appearance – it just looks perfect from all angles. And if that’s not convincing enough, did I tell you that it comes with frameless doors?

While the cabin looks familiar, it’s a much cleaner place now. Audi has chucked the rotary-controlled MMI infotainment system in favour of the company’s new 10.1-inch touchscreen. It’s the same that we’ve already seen in the new A4. The screen is an ultra-crisp high-definition display, which looks and feels amazing to operate – the haptic feedback, in particular, is a nice touch. The brushed aluminium inlays give the cabin a sporty and rich feel. Fit-and-finish and quality of materials are top class as usual. 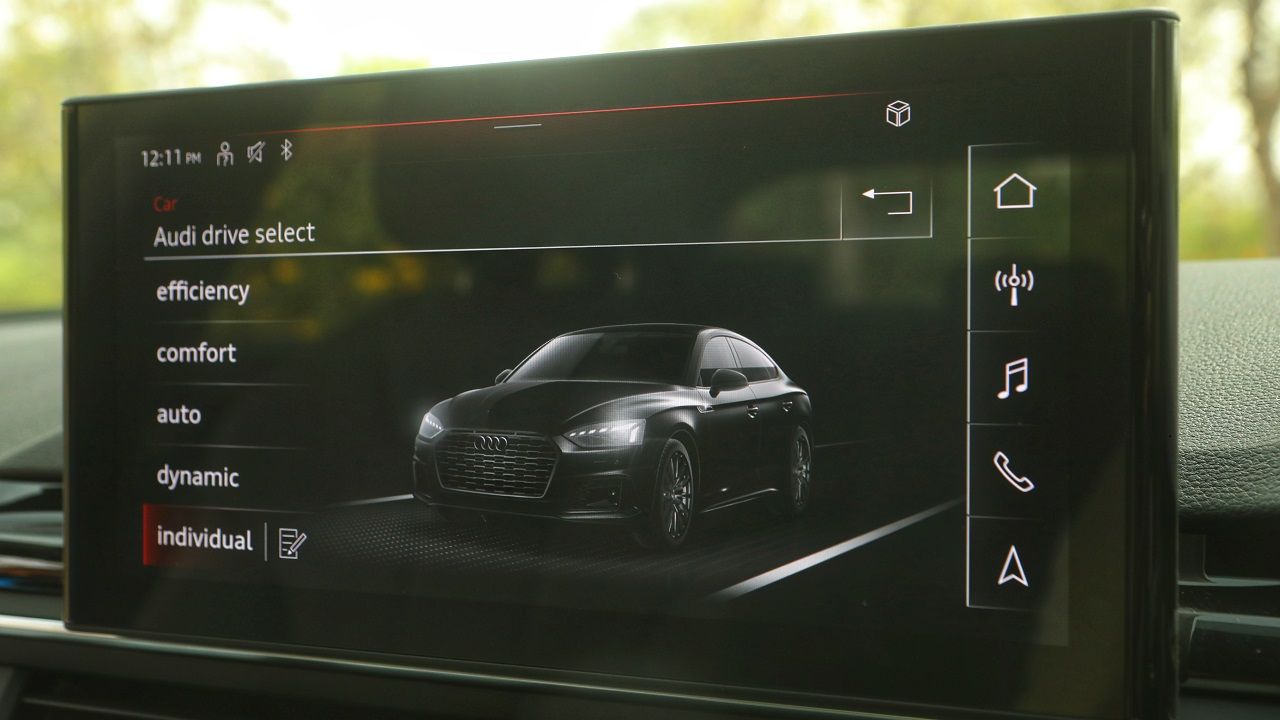 The S5 features Audi Sport leather/Alcantara seats as standard. They are roomy and offer good side support. Seats at the back are equally comfortable, but the space is tight – the tapering roofline eats into the headroom, and the seats lack adequate thigh support. A prominent transmission tunnel means that it’s a strict four-seater. However, at 480 litres, the boot is massive.

How does it drive?

On the mechanical front, the S5 retains the 3.0-litre twin-scroll turbo V6 petrol engine of the old car. The power output and torque figure remain the same as before at 349bhp and 500Nm, albeit this engine is BS6 compliant. The drive from the engine is channelled to all-four wheels via an 8-speed torque converter and quattro AWD. There’s a limited-slip differential or Audi Sport Differential for the rear axle. Adaptive dampers are optional, but the car comes with five driving modes as standard – Comfort, Auto, Dynamic, Individual, and Efficiency – to alter the engine & gearbox, exhaust, and steering settings.

Since everything is mostly unchanged, the driving experience is more or less familiar, which is to say that the S5 is still a fast and engaging brute. Acceleration, in Dynamic mode, is quite brutal. Audi claims the S5 can clock 0 – 100km/h in 4.8s, and while we didn’t verify it with a stopwatch, it does haul off furiously from a standstill. You never know it could be even quicker than what's claimed! 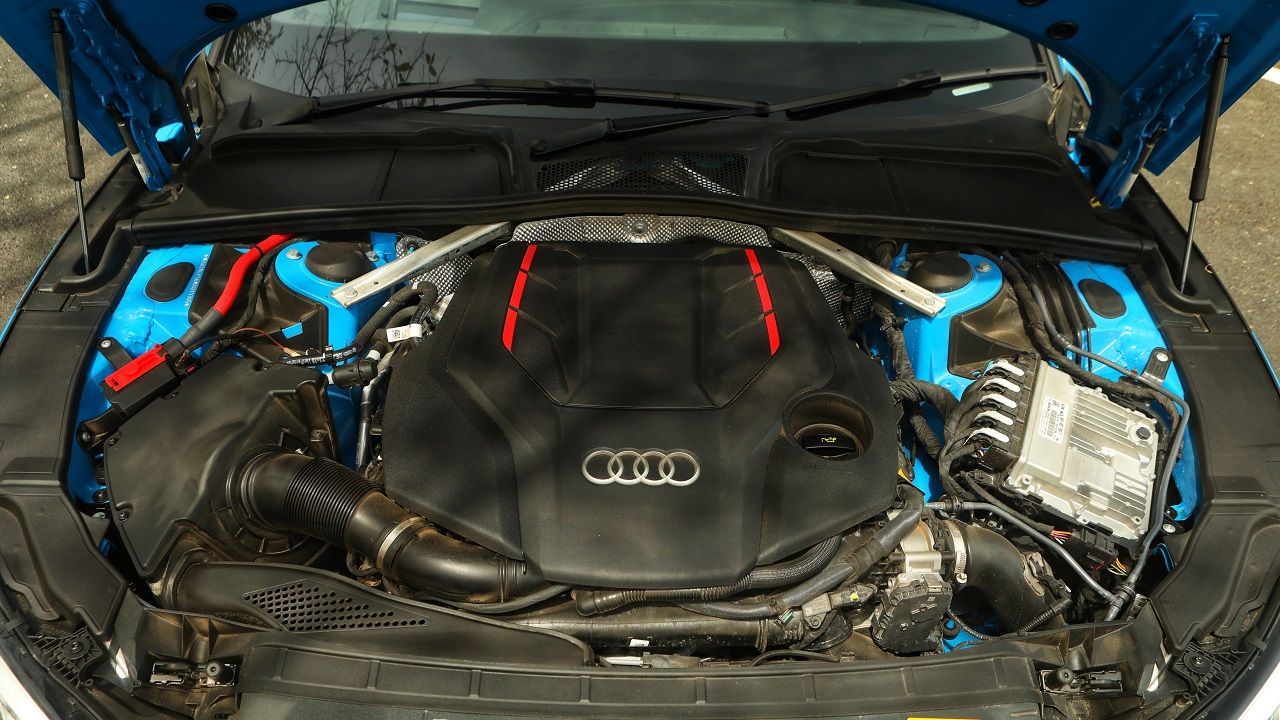 There’s a bit of initial lag below 2,000rpm, but after that, the V6 motor shows its true character. Thanks to the lumpy torque available between 2,000 and 6,000rpm, acceleration is brutal on every occasion. And while you’re at it, the exhaust produces deep and raspy noises, which I quite like. On the overrun, you can also hear the quad pipes clearing throat with loud pops – sweet indeed. In case you want a quieter or less violent ride, you can always dial it down by switching to Comfort mode.

The 8-speed gearbox is smooth and responsive for the most part, but it does feel lost when the engine is off-boost. And when you go flat out, there’s a bit of delay too. Actually, calling it a delay would be unfair – it’s more like the transmission is preparing your senses for the oncoming assault. So, with each gear change, there’s a slight pause, and then the car just shoots forward like a scalded cat. 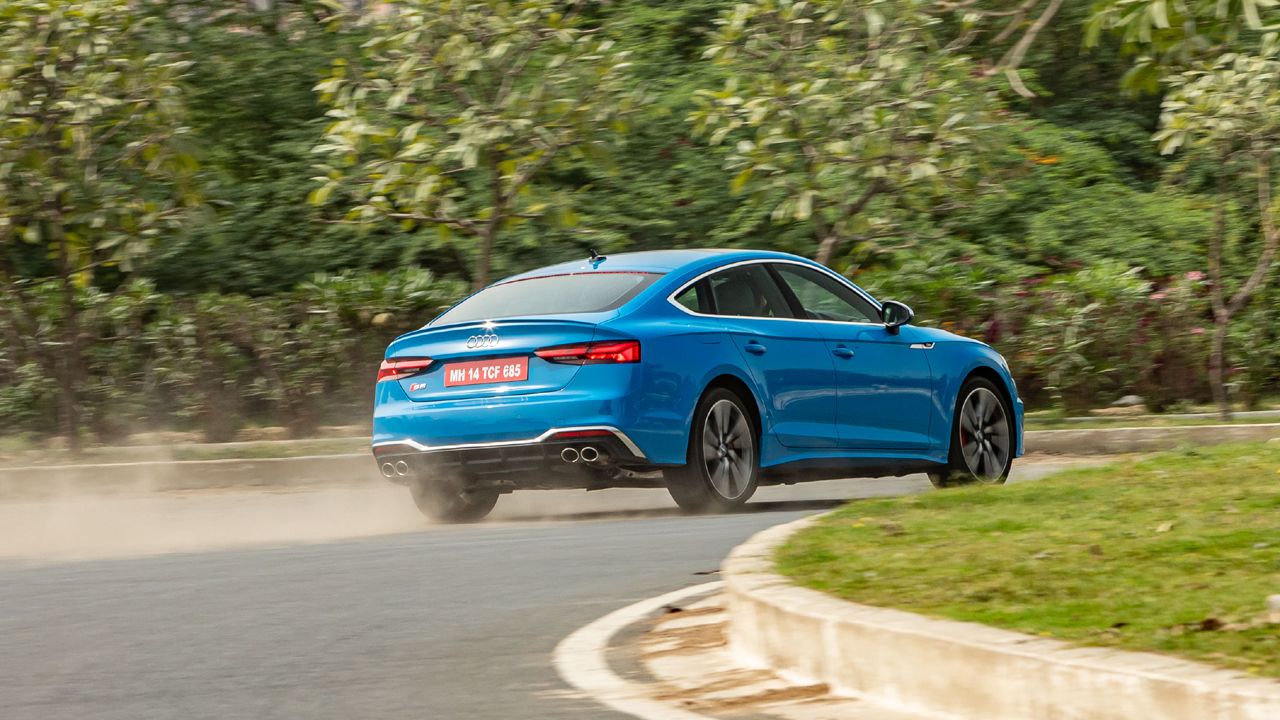 Handling? It is impeccable. The steering is light and direct but feels inert in terms of feedback. Grip levels are extraordinary, and it's almost impossible to break traction. Even when you’re at the limit of adhesion, there’s mild understeer, some tyre squeal, and slight body roll – that's all.  That’s quattro for you – it won’t let you slip.

The ride quality is pretty impressive. The suspension is firm but the ride isn’t jarring. At low speeds, undulations can toss the occupants around if you don’t slow down on time. At high speeds, there’s a bit of side-to-side vertical movement over dips and wavy roads. However, it’s all well and good – for a car of this shape and with this kind of performance on offer, it can be forgiven.

So far there’s nothing that looks wrong with the S5. However, I can assure you that rabble-rousers will be out in full force once Audi puts a price-tag on the S5 on March 22. That’s because it’s likely to be priced at around 75 lakh or more (ex-showroom). And that would make it over 12 – 15 lakh more than the locally-assembled BMW M340i – a car that offers more performance and more practicality. 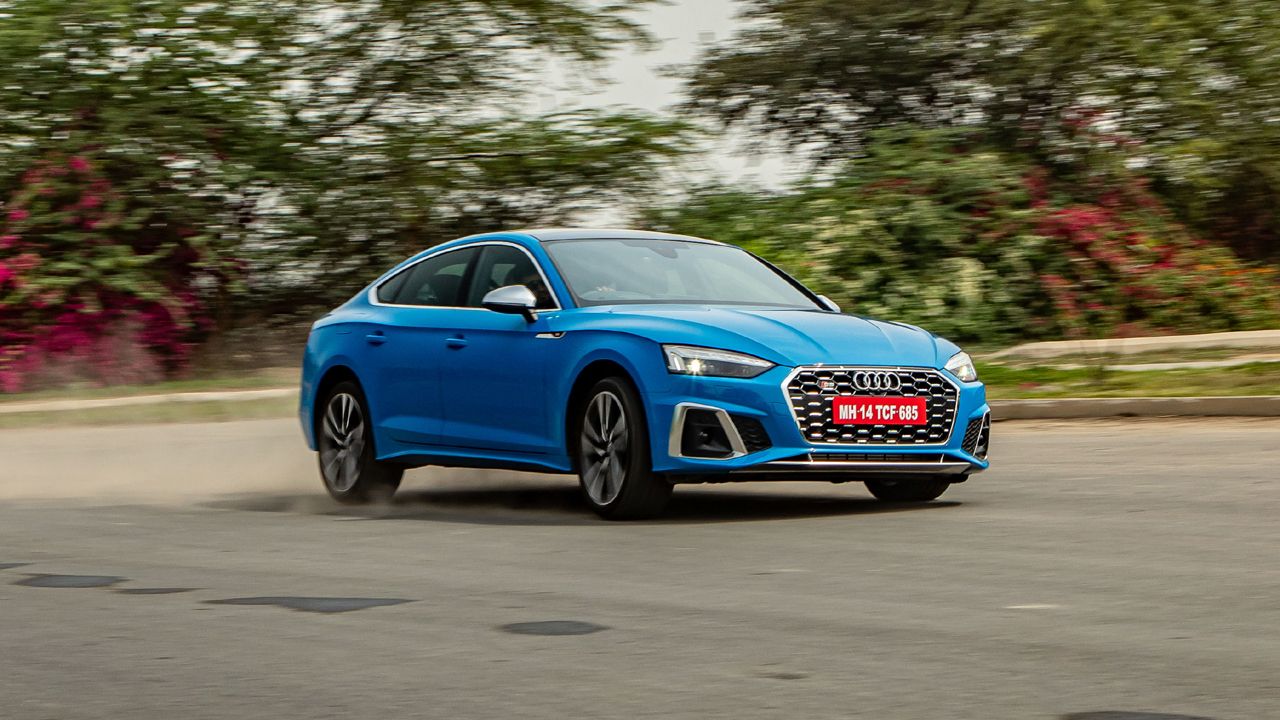 Having said that, the S5 isn’t a serious driver’s car. It’s the sort of product that has the right mix of performance, driver involvement, style, comfort and practicality. The S5 has not been made for the sole purpose of going fast, neither is it too sedate or boring. Instead, it brings all the flavours of motoring in one solid package, much like Mexican food – fiery & saucy, but fresh & healthy at the same time.

Make no mistake, the S5’s day job is still to be a proper fast four-door performance coupe that can tickle your senses. And it actually does that beautifully. However, it just happens to be the sort of guy who has a life outside of work. It's not a stuck-up performance car. And I, for one, find this aspect of it very appealing.

X-Factor: Stinking fast, sublime ride & handling, and it looks drop-dead gorgeous. If you like to go fast in style, the Audi S5 will suit you to a tee.