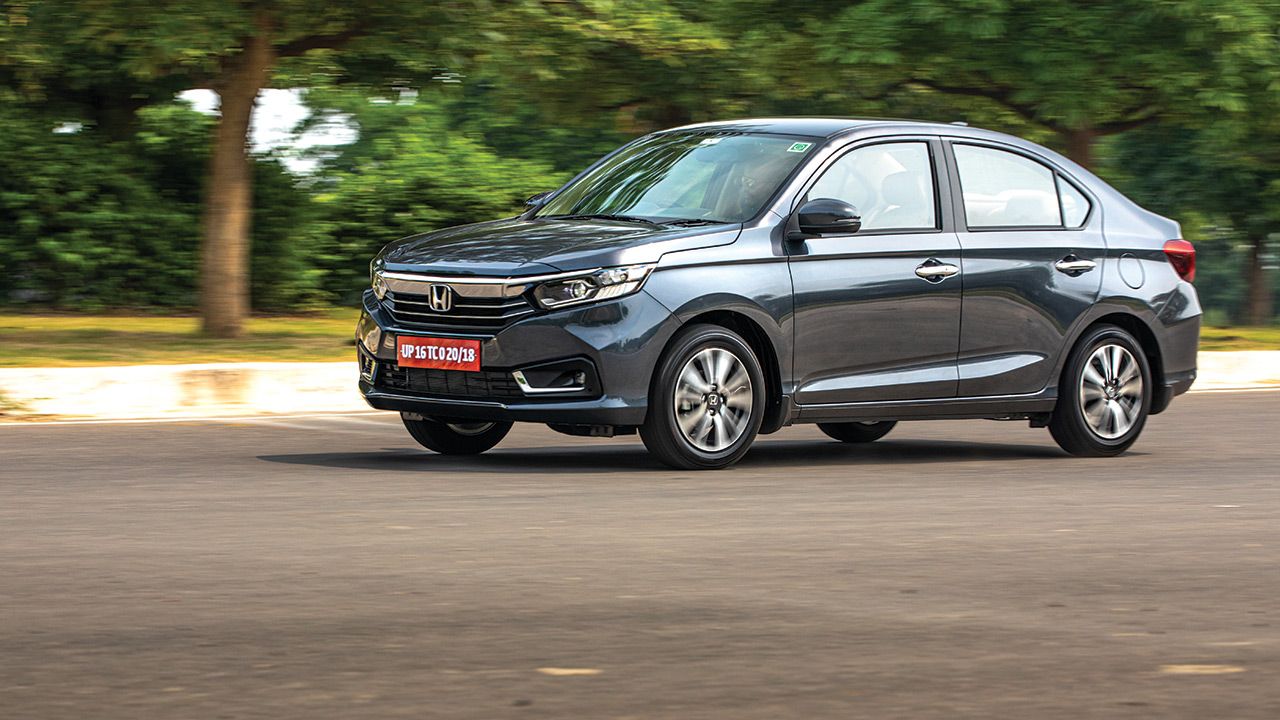 The Amaze has been a tremendous success for Honda in the sub-4m segment. And now it has received a visual facelift and some extra equipment. But is that enough?

In the incredibly competitive Indian automotive market, the Amaze has been one of Honda’s greatest successes. And there are many reasons for it, including the blue-chip reputation of Honda and the fact that the Amaze offered a refreshing, honest package to Indian customers. Also, without unnecessary frills, the Amaze offered a good amount of interior space, a large boot, enough standard features to match its competitors and frugal engines in both diesel and petrol models. And the low running cost of the Amaze – both in terms of fuel efficiency and service costs – further made it a popular choice amongst Indian customers.

Now, with competition getting intense in the segment, the Amaze has received a minor nip and tuck, which gives it a new face and some additional equipment. We drove the petrol automatic variant of the refreshed Amaze to see if the changes offer a significant upgrade for customers, and here is what we think… 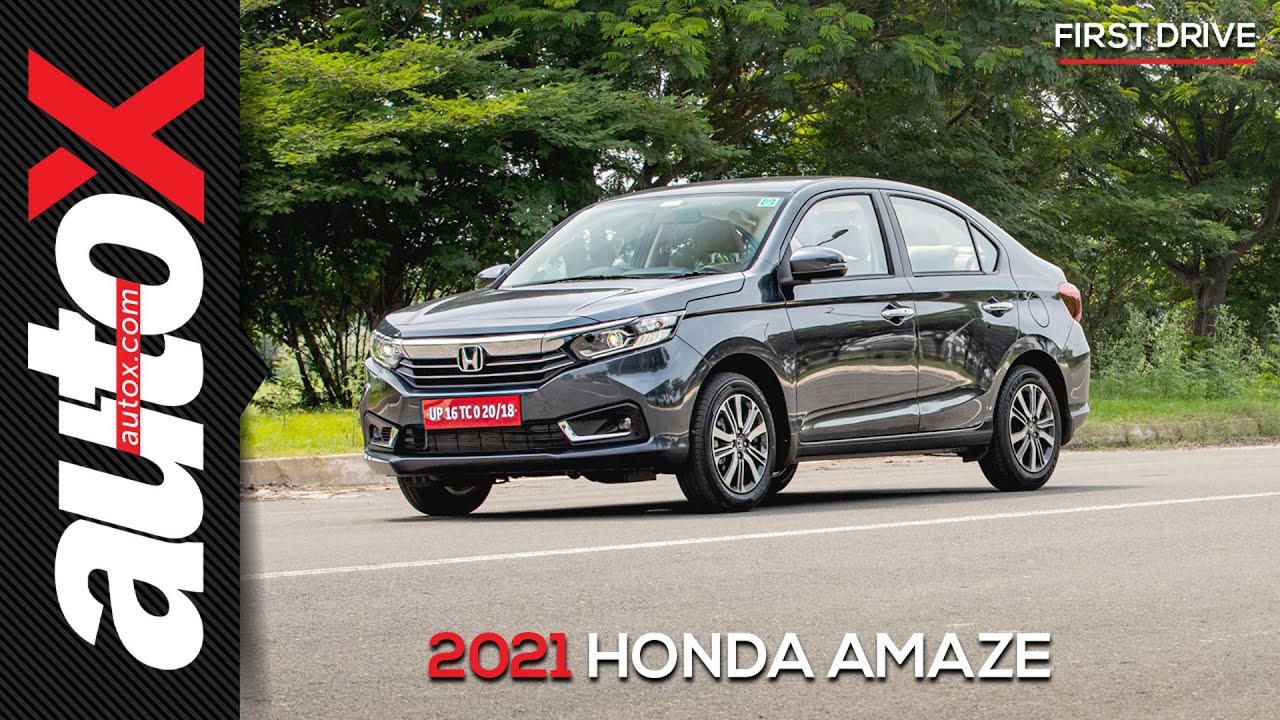 One of the things that I didn’t like about the old Amaze was that it had a face only a mother could love. I am serious – I always thought that its pointed chrome nose was very polarising. Now, even in the facelift, the Amaze has not lost the chrome nose; however, the combination of some styling changes and the fact that we have become acclimatised to seeing the chrome nose on the road makes the facelifted version look a lot more balanced. Both the front and rear bumpers have also been restyled, and so have been the headlights and taillights, which are LEDs in the top-of-the-line VX trim (the one we drove). In terms of design, the other big change is 15-inch alloy wheels, which you may find familiar, for the last-generation City had the same wheels. Interestingly, the styling changes are restricted to the S and VX trims of the Amaze – the base E variant looks the same as the earlier car. According to Honda, the reason is the popularity of the E variant in rural areas and small towns. I, however, think that by doing so Honda can keep the entry price of the Amaze affordable to attract a wide range of customers. 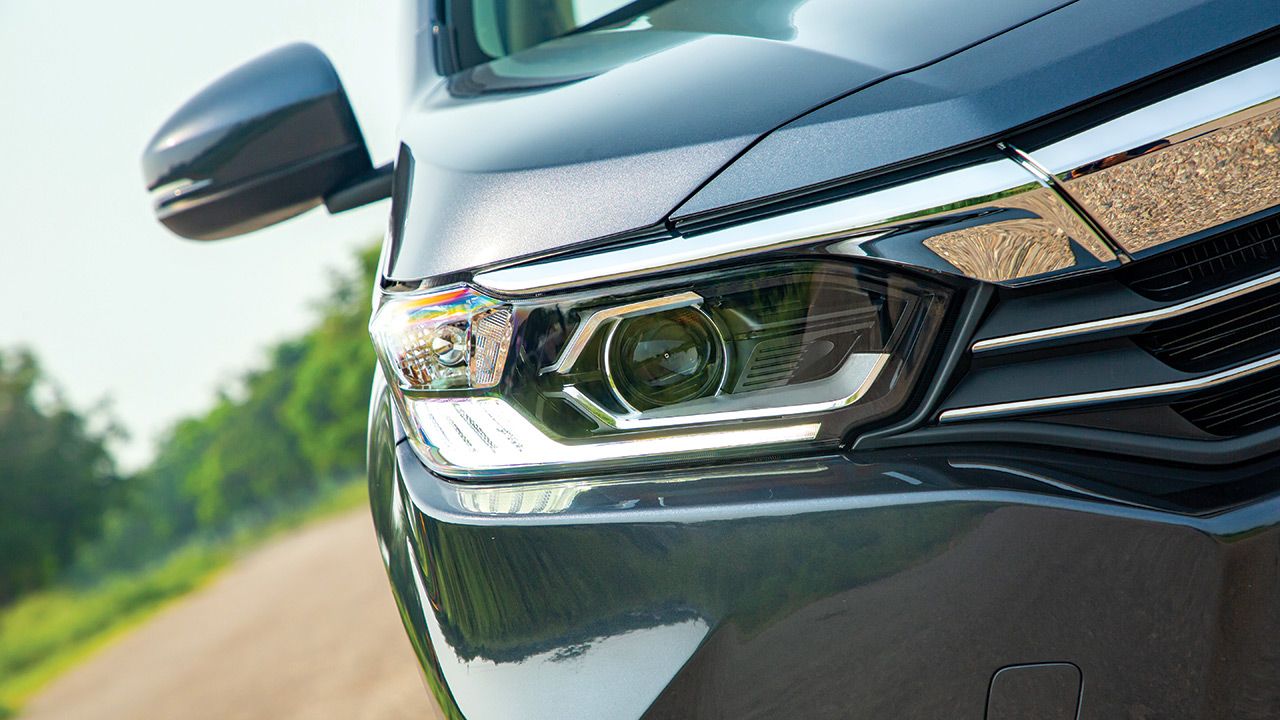 As the Amaze has not seen any mechanical changes, its driving experience remains unchanged. This means that you get a refined petrol engine, paired with a slick manual and a typical CVT. Sure, the CVT has the rubber-band effect, which is endemic to all CVTs, but with its lightweight and decent power levels, the Amaze is pleasing to drive. In fact, in a world increasingly dominated by cars that feel unengaging and synthetic, the Amaze still has a mechanical feel to it, which is a refreshing and pleasing experience. If there is an aspect of the Amaze that needs improvement, I would say it’s the suspension tuning. While it’s perfectly fine on smooth roads and highways, it tends to lose its composure on broken roads. And I think the car could certainly benefit from upgraded dampers in terms of better cushioning. 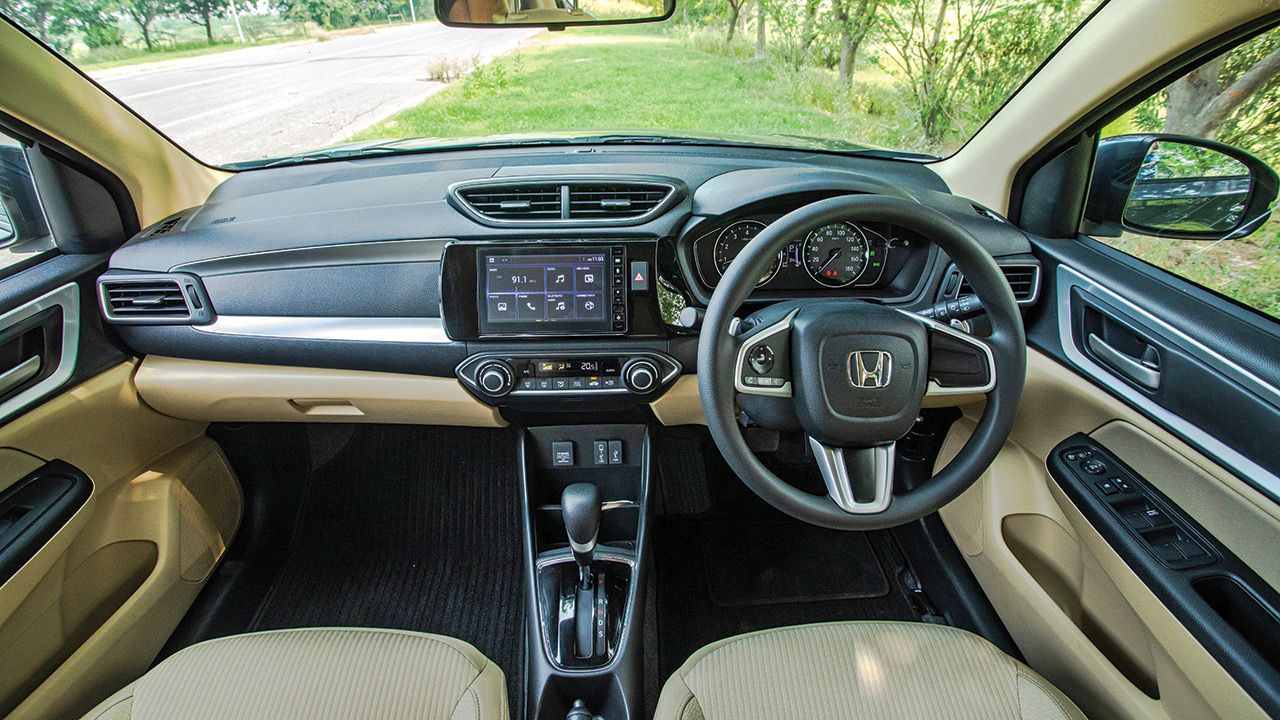 One of the hallmarks of the Amaze has always been its space management, and the facelifted model is no exception, thanks to the excellent platform. Despite being under four metres in length, the Amaze feels spacious and has ample legroom and shoulder room. The only place it struggles is in the width department. This means that five full-size adults will be a squeeze. The rear floor tunnel also doesn’t help in this aspect. It’s better suited for four full-size adults. The under-thigh support of the front seats could do with some improvement – the seat squab feels too small, and the added support would certainly help make them more comfortable.

The other quibble that I have with the Amaze is not unique to it – in fact, it’s common to all Honda models in India. Yup, you guessed it, I am talking about the resolution of the multimedia screen, which is most certainly not up to scratch – in direct sunlight, the screen fades away and is barely legible. Similarly, the rear-view camera’s resolution can do with significant improvement. It reminds me of the 2MP camera of my old Nokia phone – not a happy memory indeed. In today’s connected world, I think these are urgently needed upgrades on virtually all cars that Honda sells in India. 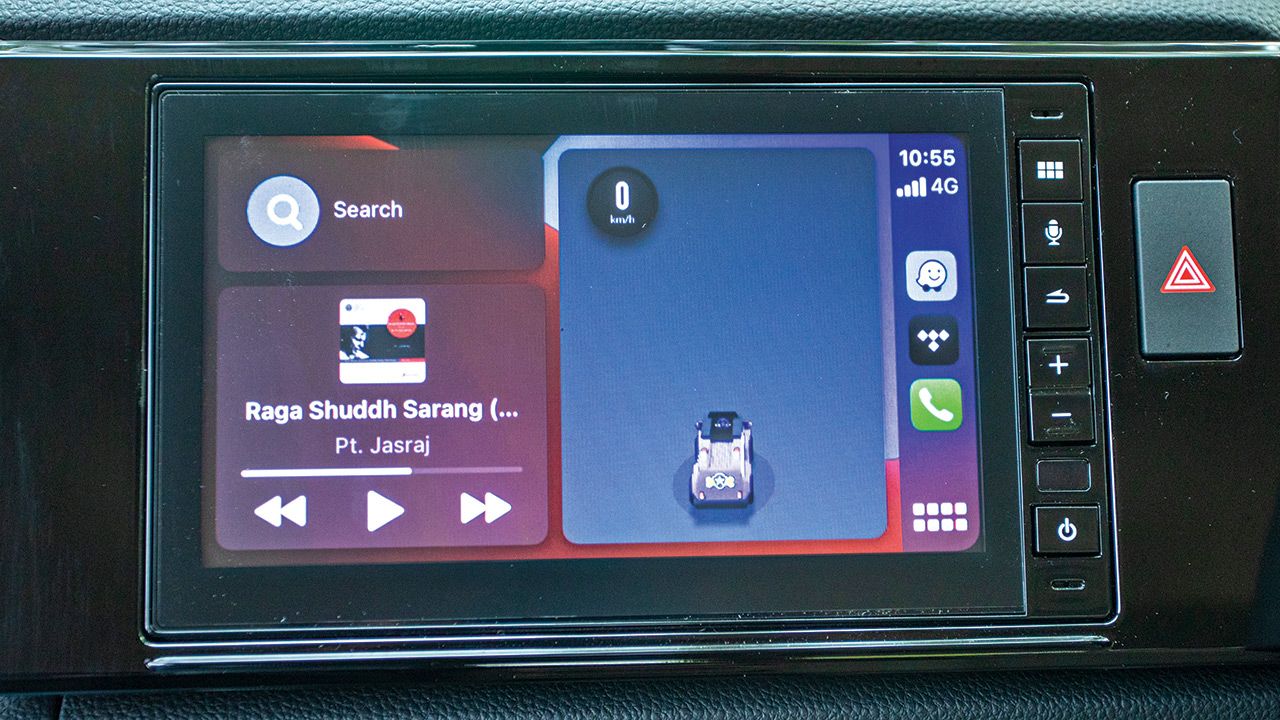 On the plus side, the air-conditioning system deserves a special mention, for it is so effective that it made me freeze even when it was set at 24 degrees during the drive – I had to set the temperature to 26 degrees to stop my hands from freezing on the steering wheel!

There is little doubt that the value of a car is one of the paramount requirements in the Indian market. And here, the Amaze presents an interesting conundrum. You see, the petrol variants of the car – which are priced between ₹7.16 and 9.05 lakh (the S and VX trims; the non-upgraded E trim costs ₹6.32 lakh) – offer pretty good value. With twin airbags and ABS as standard, along with LED headlights and tail lamps, amongst other features, the petrol variants of the Amaze are very well priced. Pair this with an honest machine that drives well and is exceedingly practical and cheap to maintain, and you’ll know the reason for the immense popularity of the Amaze. 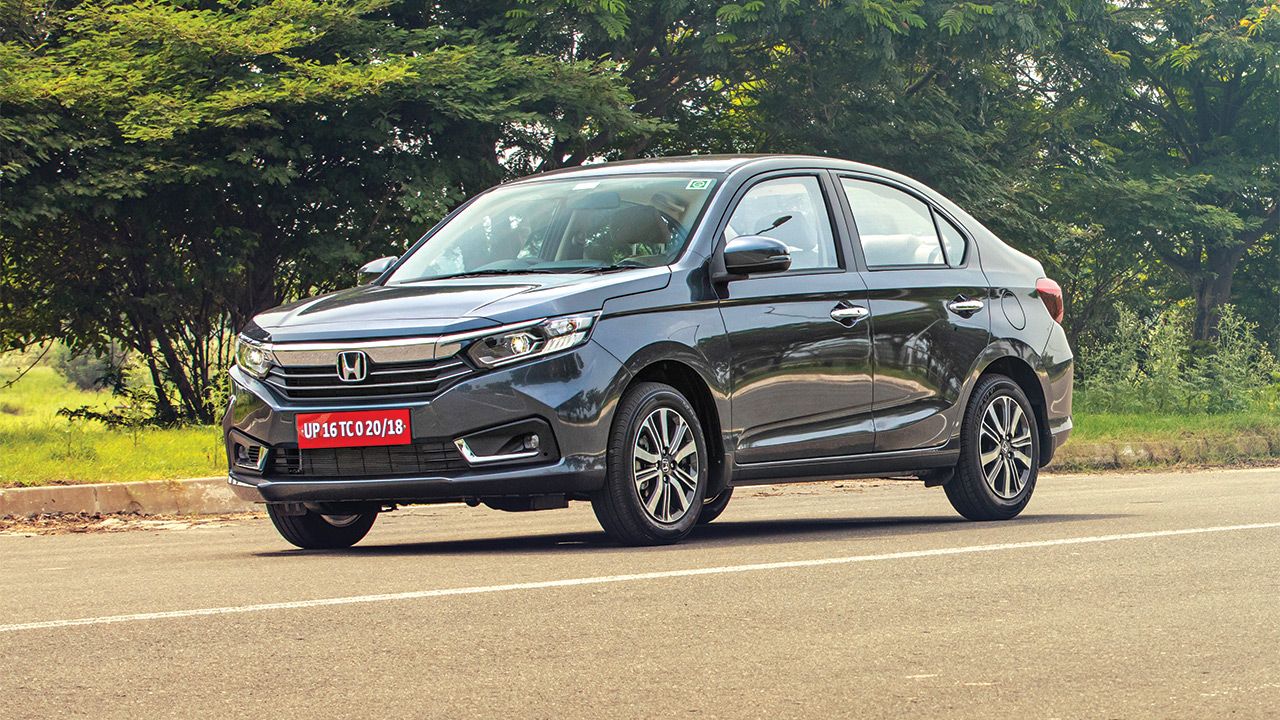 The pricing of the diesel variants, though, is challenging to accept, for they cost over ₹2 lakh more than their comparable petrol variants. Sure, I understand the extra power and fuel efficiency of the diesel engine, but you’d have to drive north of 40,000 kilometres in a year to recover the premium that the diesel variants demand. This means that unless you want to use it as a commercial vehicle, the diesel variant doesn’t make financial sense, at least, not for 99% of customers.

But the petrol-diesel price difference aside, the Amaze continues to be an honest, competitive product, which deserves your attention, if you’re looking for a sub-4 metre sedan, that is.

X-Factor: One of the most competitive packages in the sub-4 metre segment. 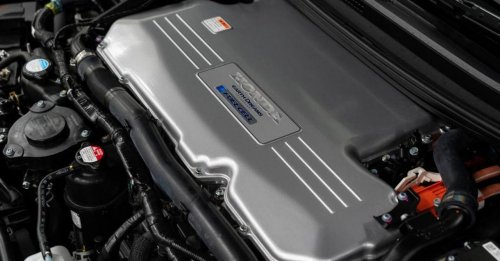 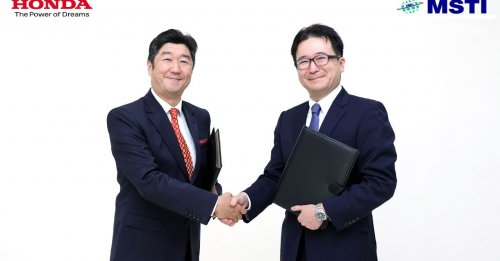 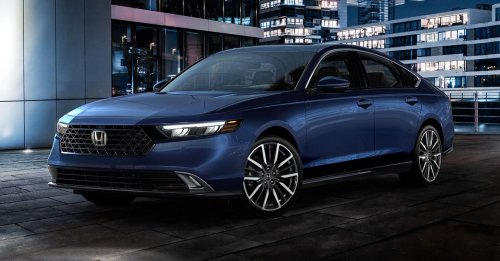 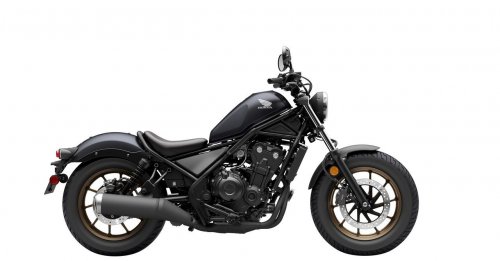 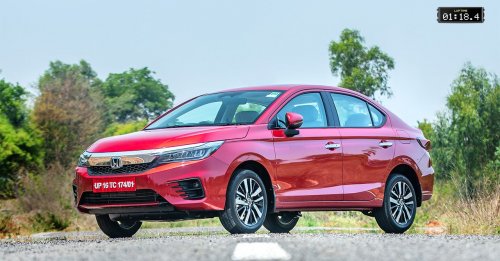 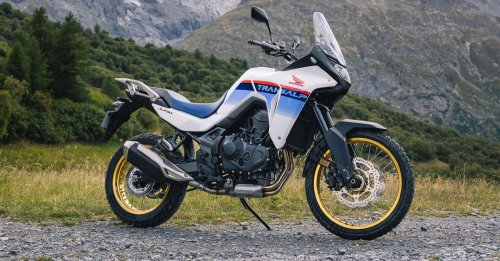