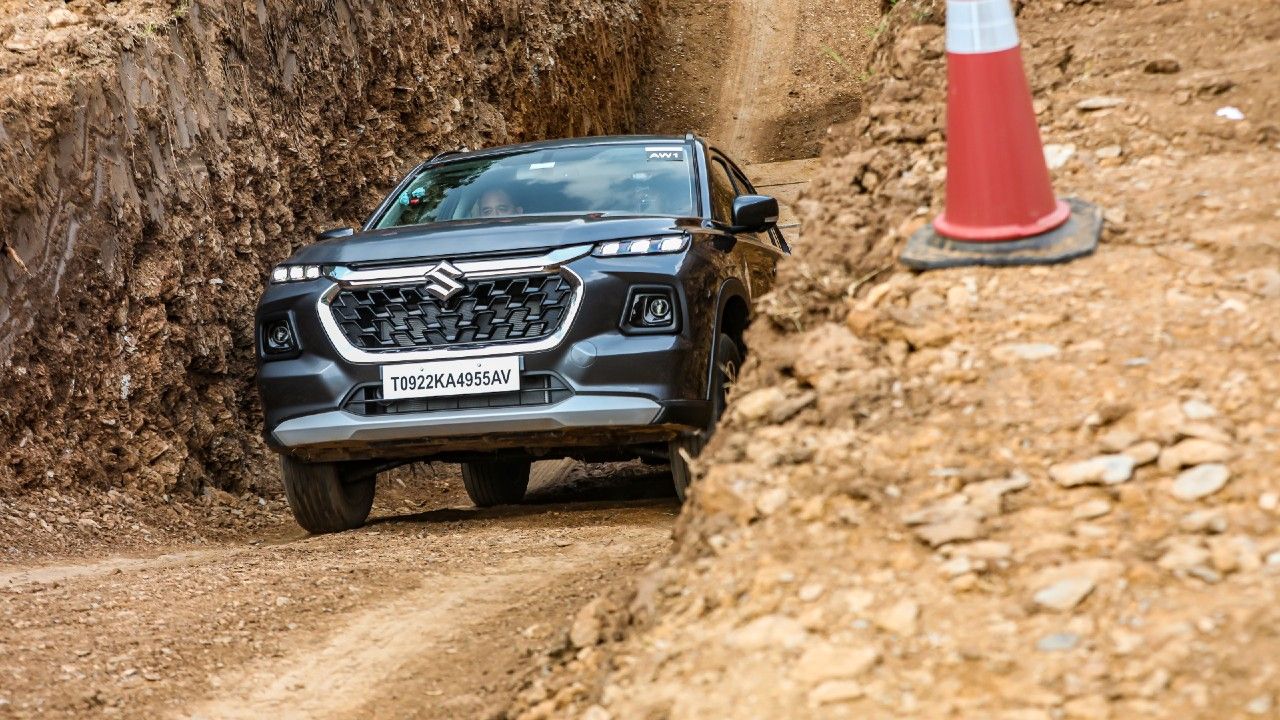 The Grand Vitara is back! Maruti Suzuki’s flagship SUV for India has returned in an all-new avatar with some really interesting powertrain options to take the fight to the likes of the Hyundai Creta and Kia Seltos. The Grand Vitara is the only other SUV in the segment (aside from the Toyota Urban Cruiser Hyryder) to offer a proper strong hybrid system and also all-wheel-drive. We’ve driven it extensively on the road and through a tricky off-road obstacle course to find out if it’s worth your money. Let’s start with the off-road bit.

This is the first time, in a long time, that Maruti Suzuki is trying to play the upper hand on mechanicals alone. Not fuel efficiency, not reliability, not space – the USP of the Grand Vitara is, in my opinion, AWD. It is impressive how well the AllGrip system works. On the small off-road course charted out for us, the Grand Vitara tip-toed through an articulation pit, went over steep inclines, automatically controlling its momentum on the other side thanks to hill-descent control, and powered through a slush pool with no trouble at all. There are a few things to note about the AllGrip system though. 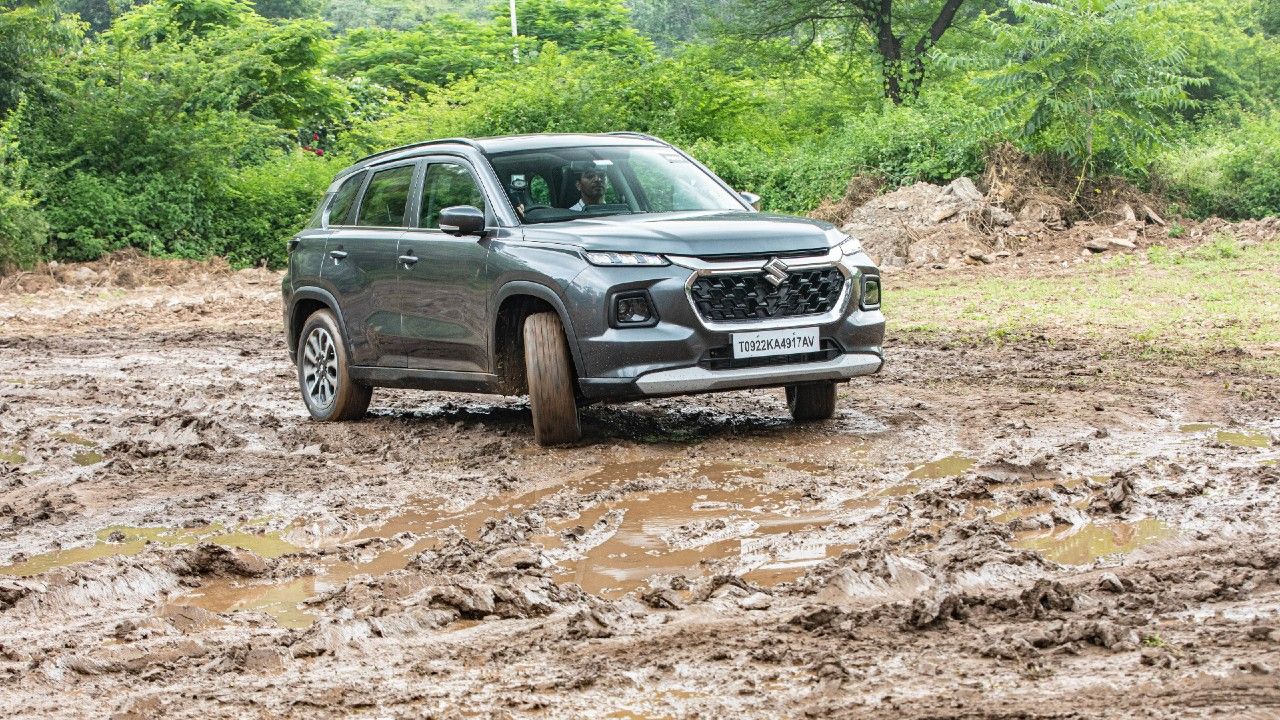 First, it has four modes – Auto, Sport, Snow and Lock. Auto is geared for efficiency so the car runs primarily in two-wheel-drive unless the rear wheels are needed. Sport dials up the throttle response, of course, and Snow does the exact opposite. In Snow, the revs are controlled on loose surfaces even when you’re a little too eager on the throttle – helping you maintain traction. Finally, there’s Lock, for which you first need to engage Snow, and then you can thumb the dedicated button. Lock essentially keeps the AWD system engaged all the time, perfect if you know you’re going to be tackling tough terrain constantly. Also, to engage Hill-Descent Control, you need to be in Lock. 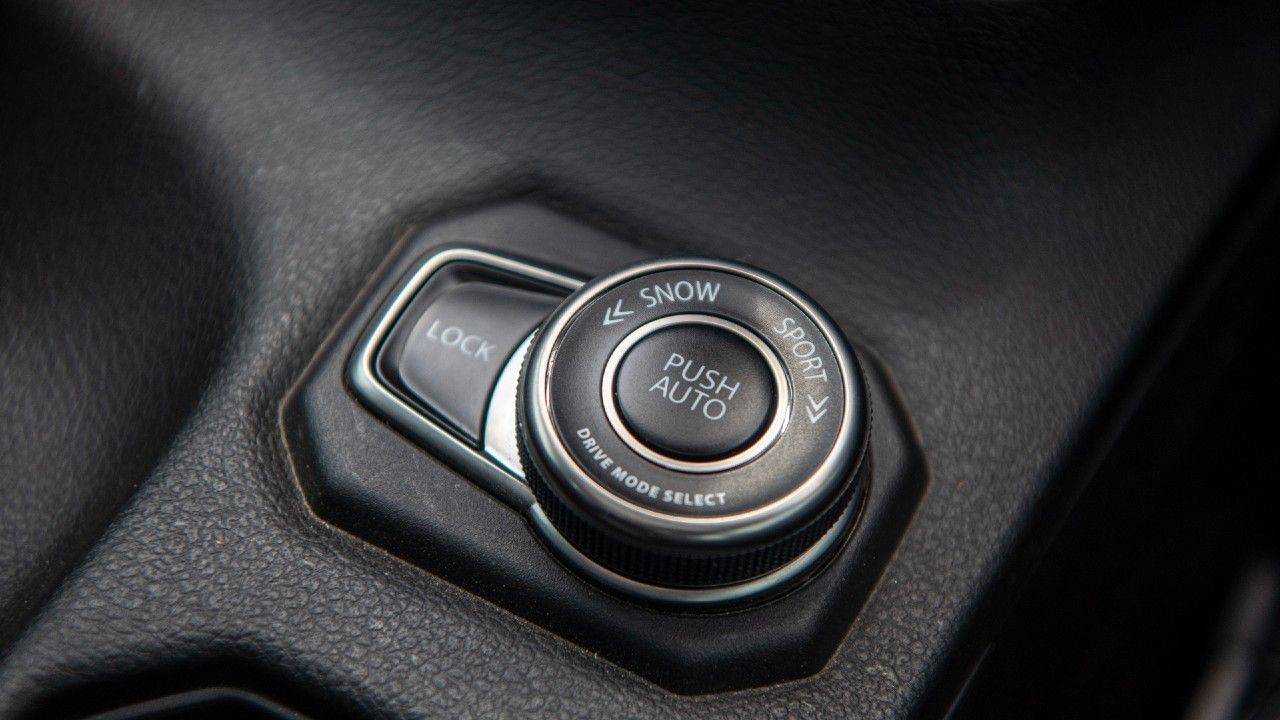 Second, and more importantly, AllGrip is only available with the 1.5-litre mild-hybrid powertrain and only with the five-speed manual gearbox. This means you’ll have to choose between capability and everyday practicality, and I suspect most people would pick the latter. The decision to stretch the budget for a top-spec AWD AT variant would’ve been a much easier one. 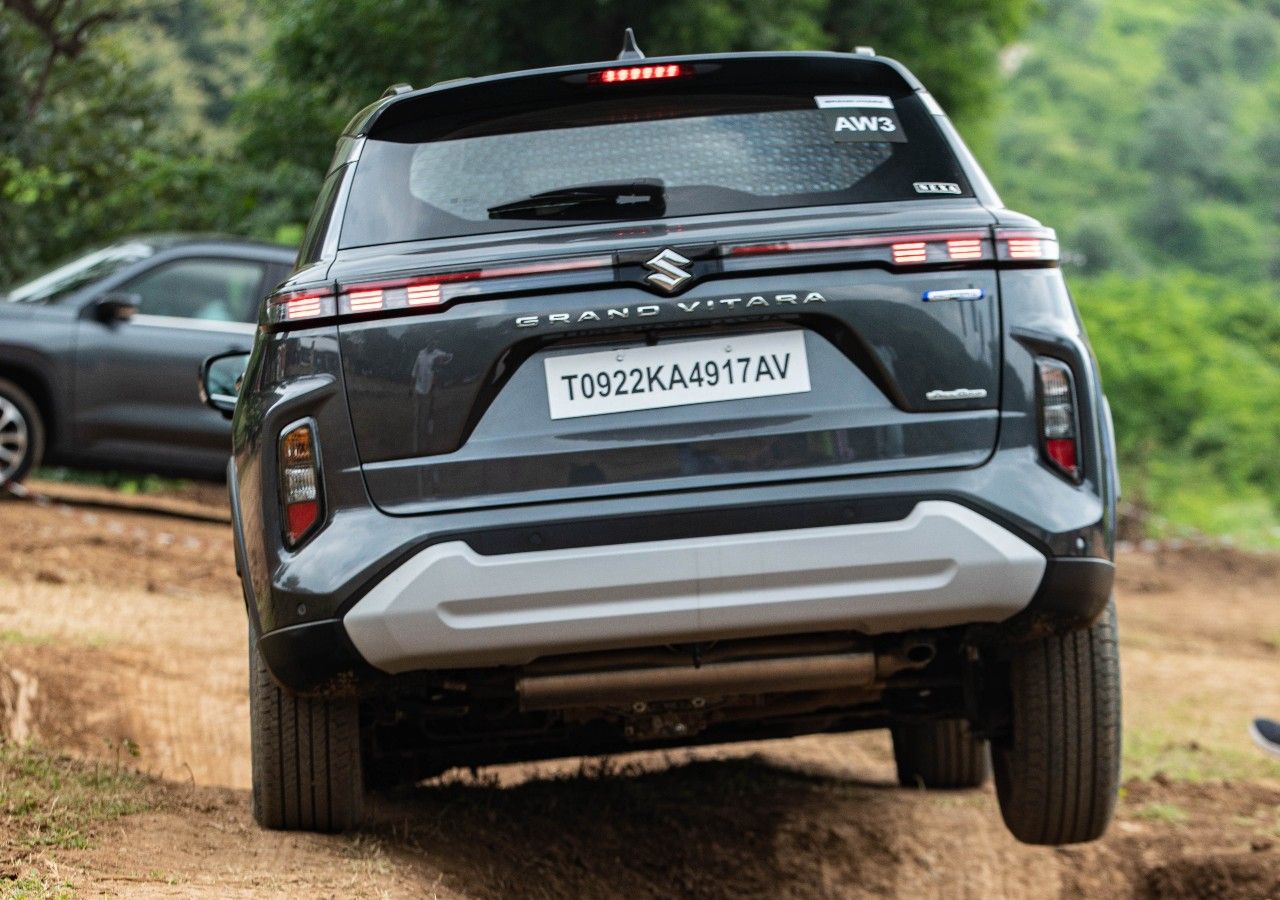 Lastly, the Grand Vitara isn’t an outright off-roader. I know I’m stating the obvious, but lots of people on my Instagram handle were comparing it to the Scorpio-N, and this isn’t nearly as capable. Think of the Grand Vitara as a rough-roader that won’t get stuck in sticky situations where most other FWD ‘SUVs’ will struggle. True-blue SUVs like the Scorpio-N and Toyota Fortuner will leave it in the dust when the going gets really tough.

After leaving the off-road track, we hopped straight into the strong-hybrid variant of the Grand Vitara. This setup also utilises a 1.5-litre petrol motor, albeit an entirely different one to that in the mild-hybrid, an e-motor and a battery pack. The total system output is 113bhp, though there’s no combined torque figure. 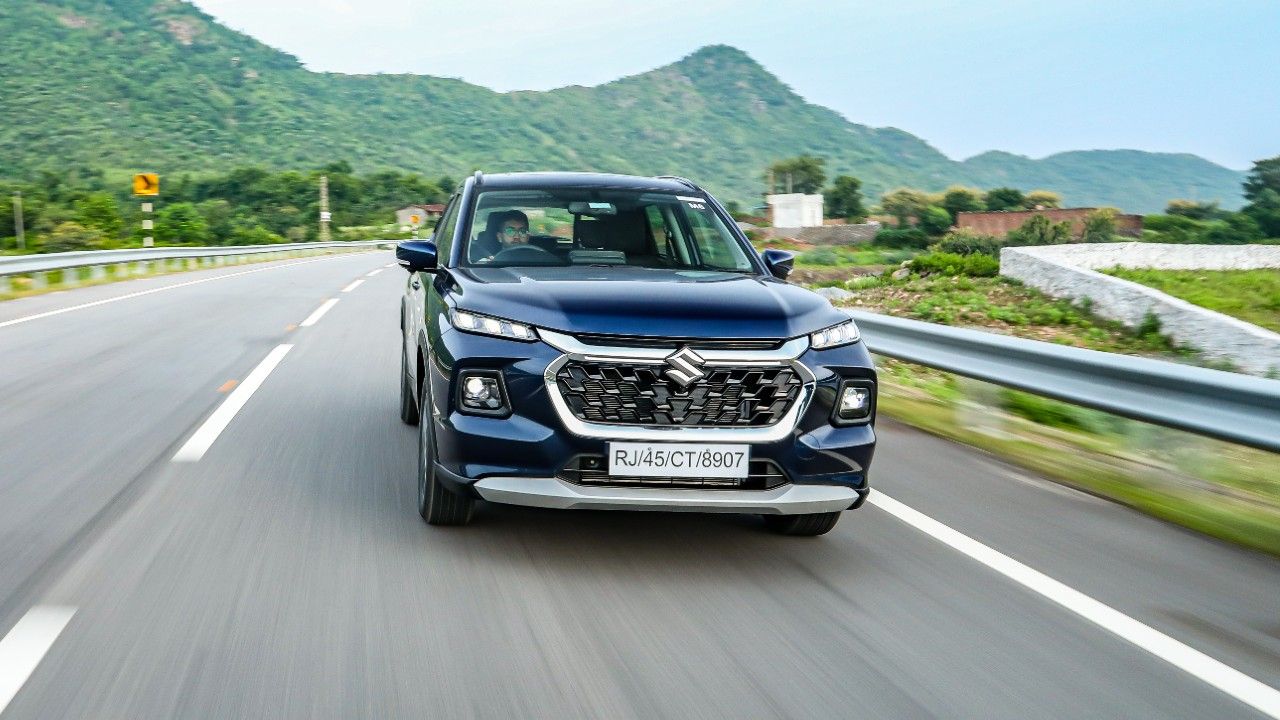 The strong hybrid is zippy at low speeds. Throttle response is sharp, the e-motor intelligently fills in the torque the naturally-aspirated petrol motor lacks, and it builds up speed well till about 95kmph. Post that, the performance falls off a cliff and you would struggle to make quick overtakes at 120kmph. It’s not that you can’t hold a triple-digit cruise, you can. But it does feel stressed. When you’re pushing hard, the e-CVT’s rubber band effect makes the engine fairly vocal in the cabin too, though it’s not a particularly unpleasant noise. 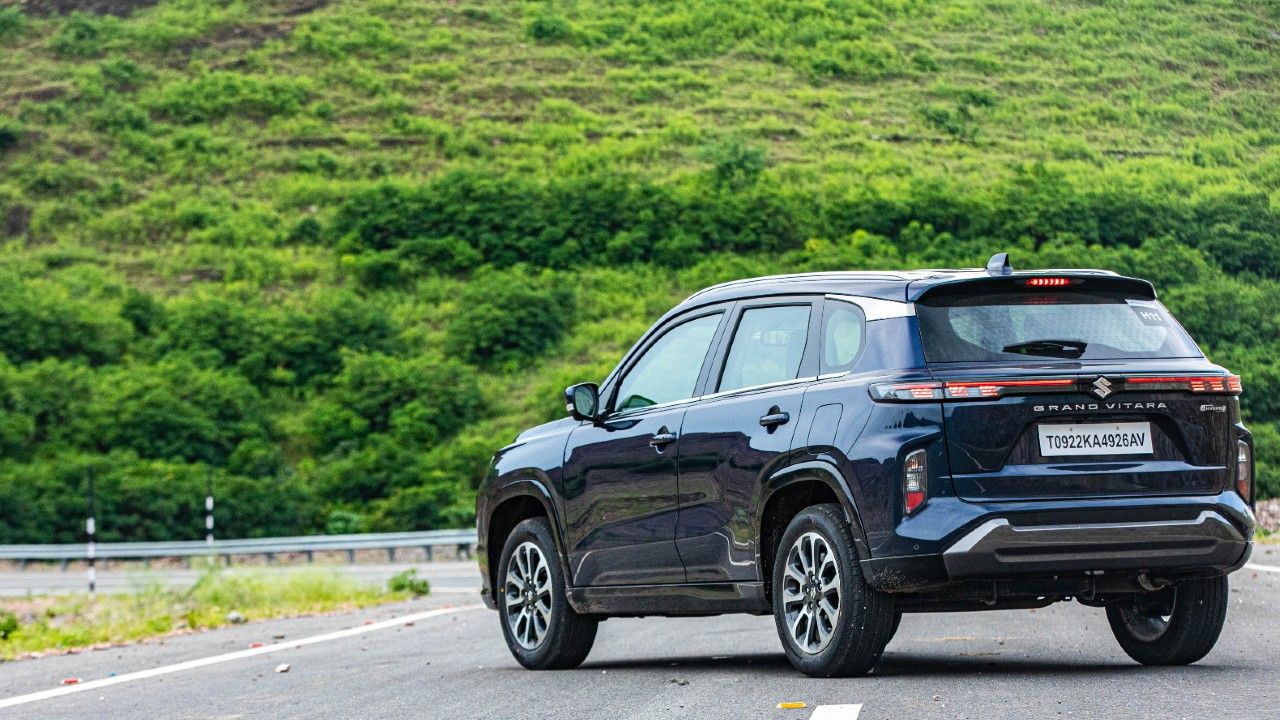 This powertrain is at its happiest, and most efficient, at city speeds. And at those speeds, the Grand Vitara can also do short distances on electric mode alone, which is handy. That said, as soon as you reach an incline or need to pick up the pace, the engine (smoothly) kicks in and helps you along. Efficiency is good, and you can expect 20kmp/l fairly easily. This would be our powertrain of choice if 85-90% of your driving is within the city, and if fuel economy is a priority.

If you will be doing lots of long-distance driving, highway cruises and inter-city travel, I’d suggest opting for the 1.5-litre mild-hybrid powertrain. At 101bhp and 137Nm, it is down on power, but it is also a tad bit lighter and has enough top-end performance to pull you along well at triple-digit speeds. This powertrain isn’t nearly as efficient as the strong hybrid, with real-world efficiency figures hovering between the 13-16kmp/l range, depending on the scenario. 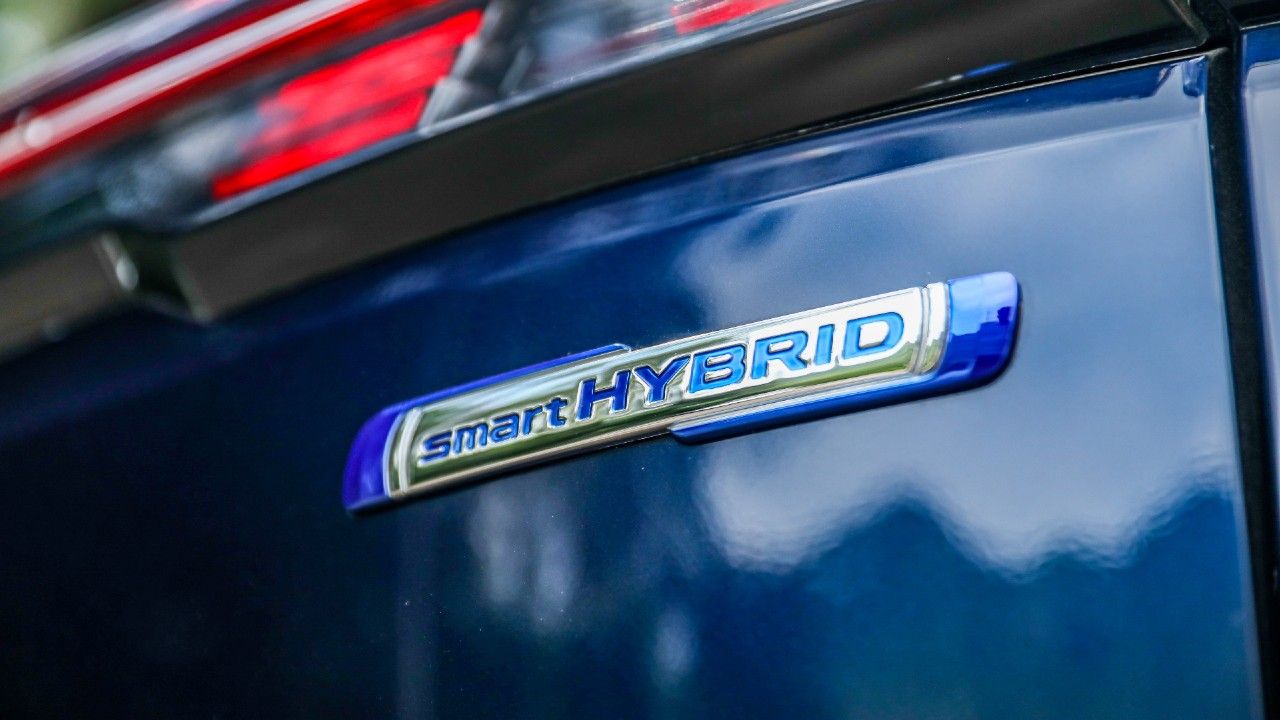 That said, the mild-hybrid isn’t an enthusing engine either. The turbo-petrol Creta and Seltos, and even the Volkswagen Taigun and Skoda Kushaq, will demolish it in a drag race. The Grand Vitara can keep up with all those when the twisties arrive though, thanks to its sorted dynamics. And, thanks to great ride quality, it will speed past them all when you encounter a rough patch. The Grand Vitara really does have fantastic ride comfort, soaking up bad bumps and potholes with ease, with only the really sharp ones making their presence felt with a thud. 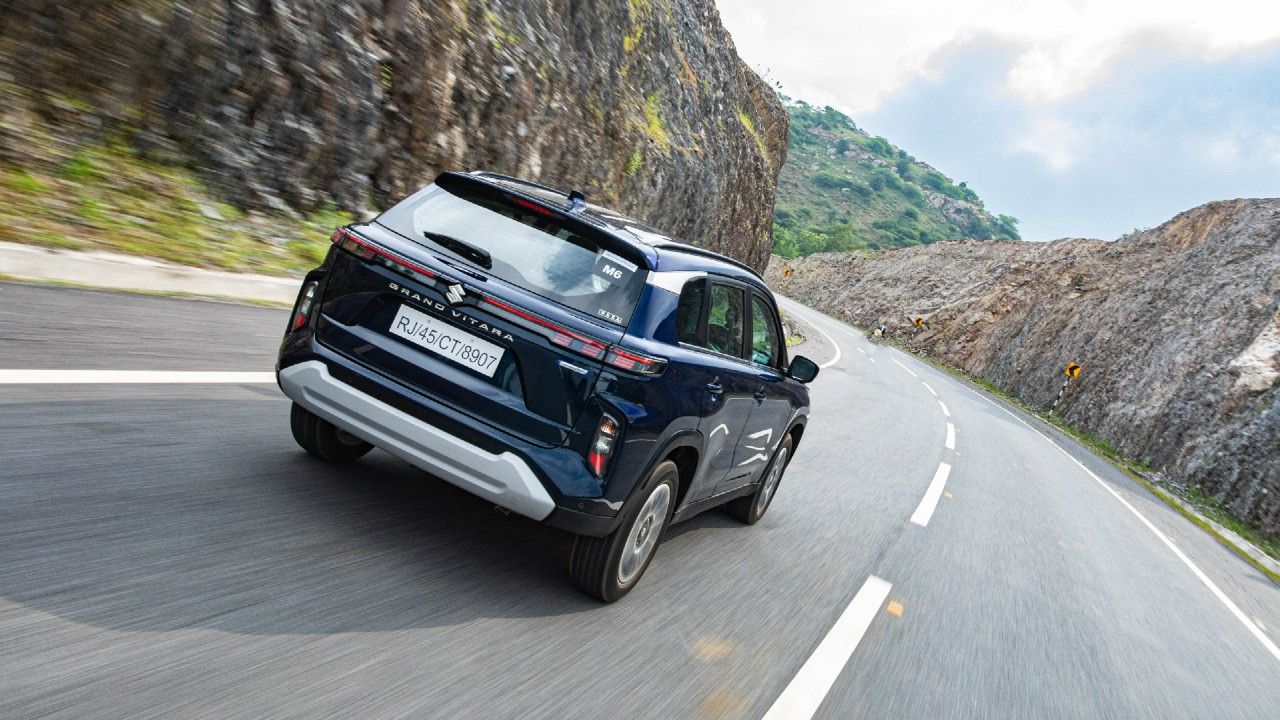 Now that you know what the Grand Vitara is like to drive, let’s halt for a moment and talk about the interior. It is a nice place to be, I’ll give it that. The seats are very supportive and supremely comfortable. They also have enough adjustability so you can settle into a comfortable driving position. The panoramic sunroof is best-in-class, the dual panes being put to use to open up a massive space when the weather is good. The quality of materials isn’t plush, but it does feel built to last and I don’t expect it to start rattling after one trip to Ladakh. Space is good too. There’s adequate knee room and headroom in the second row and a fairly large boot. The strong hybrids battery pack takes up some luggage space though. 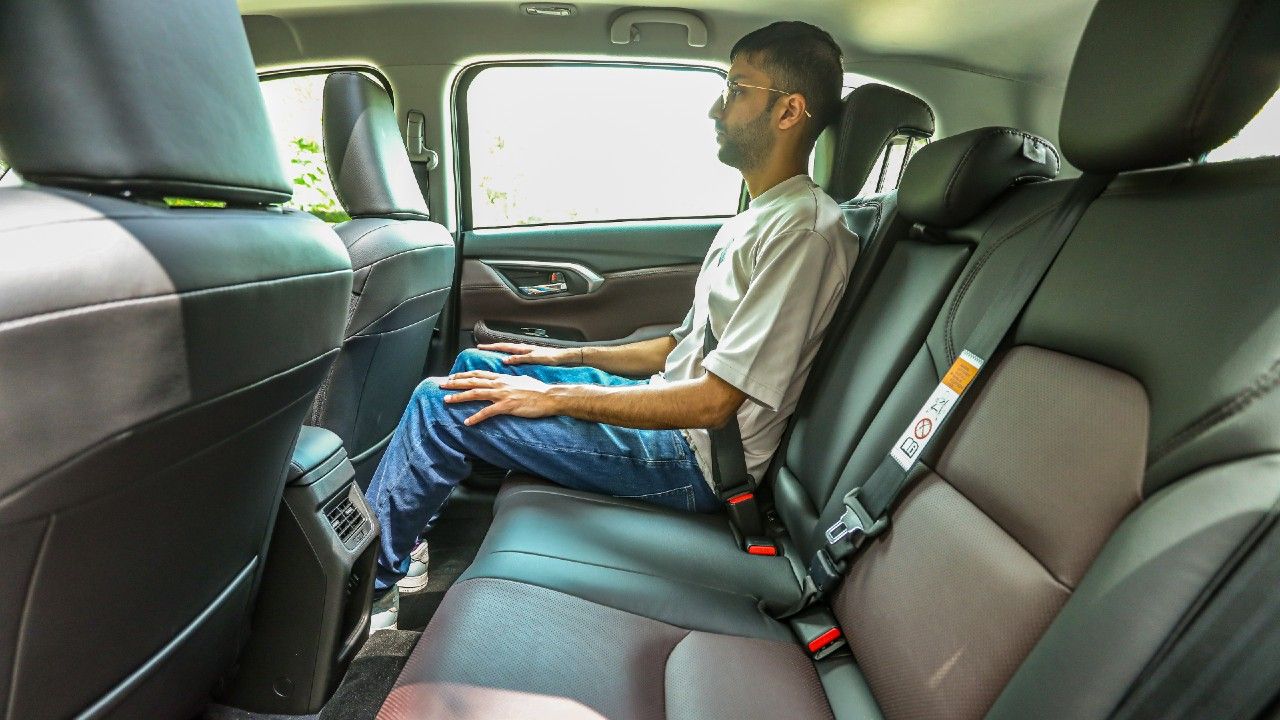 It’s also got all the right features – wireless Apple CarPlay / Android Auto, automatic climate control, automatic headlights and cruise control, among others. Some stuff exclusive to the strong hybrid is the ventilated seats, head-up display and wireless charger. The ventilated seats are definitely a must-have in our conditions and it’s a miss for it to be reserved for the strong-hybrid. 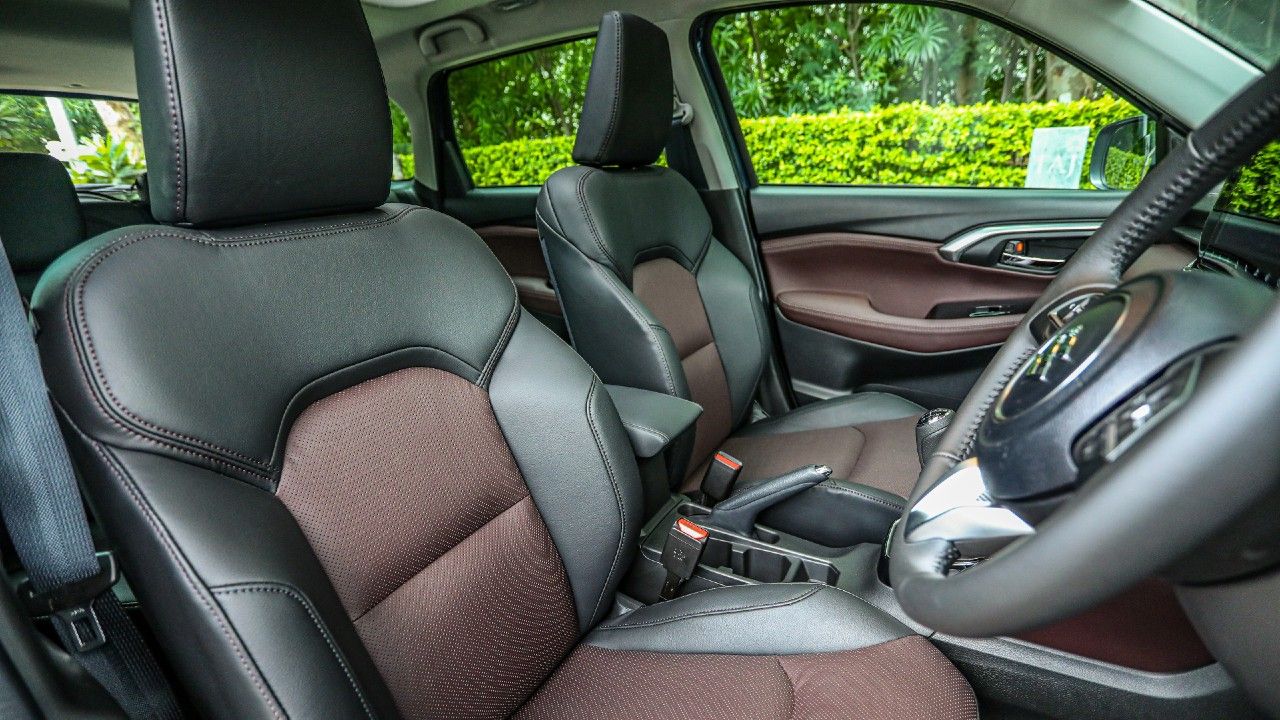 There are some downsides to the Grand Vitara’s cabin though. The net for the sunroof is too thin and lets a noticeable amount of sunlight and heat inside, the 360-degree camera quality is sub-par (worse than the Baleno/Brezza) and perhaps the biggest downside of them all, the familiarity of it all. A lot of people buying the Grand Vitara will be graduating from a smaller Maruti Suzuki, and they’ll find lots of controls, buttons and switches lifted from their cars – ones that cost half, or maybe even less than half as much. It’s not an outright negative, but the lack of premiumness as opposed to the Creta/Seltos is significant and could be a dealbreaker for some. 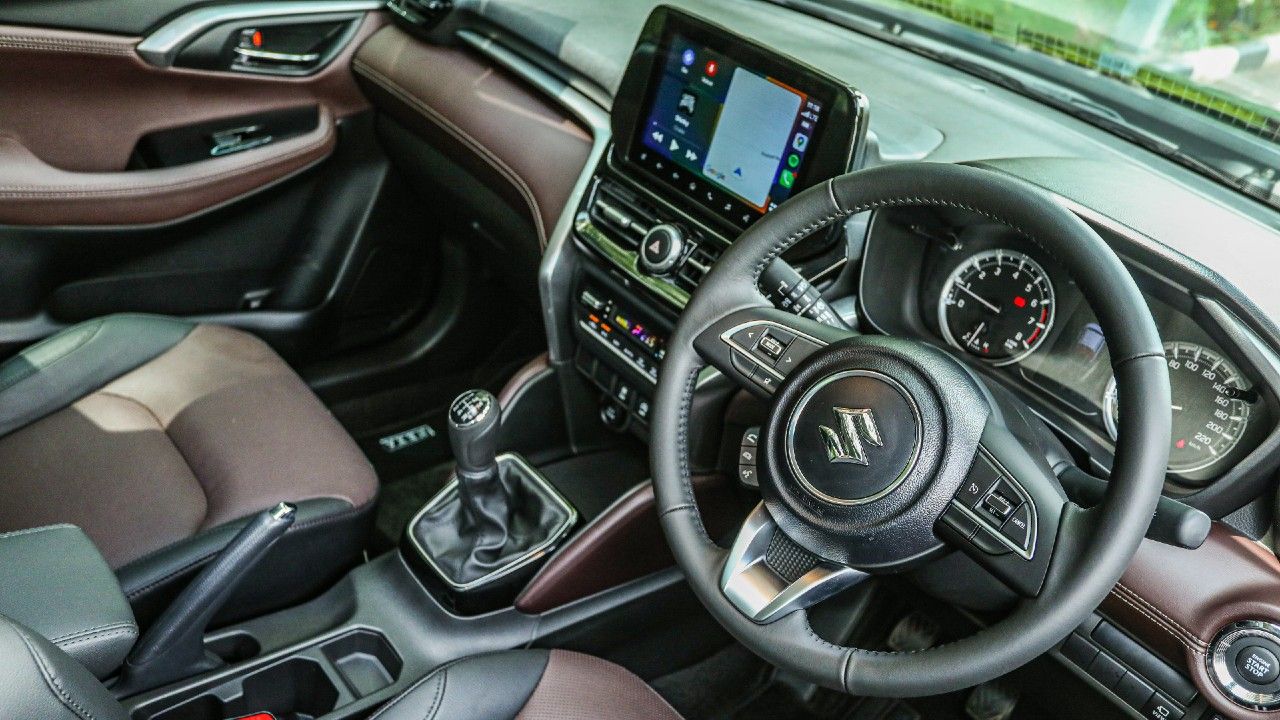 Overall then, the Grand Vitara is an interesting product. The strong-hybrid is easily the most efficient powertrain in its class and the availability of AllGrip AWD makes the Grand Vitara the most capable mid-size SUV, alongside the Toyota Hyryder. It also has adequate space inside and all the right equipment. It doesn’t feel expensive, there’s no getting away from that, but then it does claw back with the reliability and peace of mind that so many of us associate with owning a Maruti. And that could make it a hot seller.

In terms of pricing, expect it to be similar to the Hyryder. While prices for the entry-level variants of that haven't been announced either, expect the 2022 Grand Vitara prices to range between Rs 13-19 lakh. At that price, it could undercut rivals spec-for-spec, but it won't exactly feel like a bargain either. 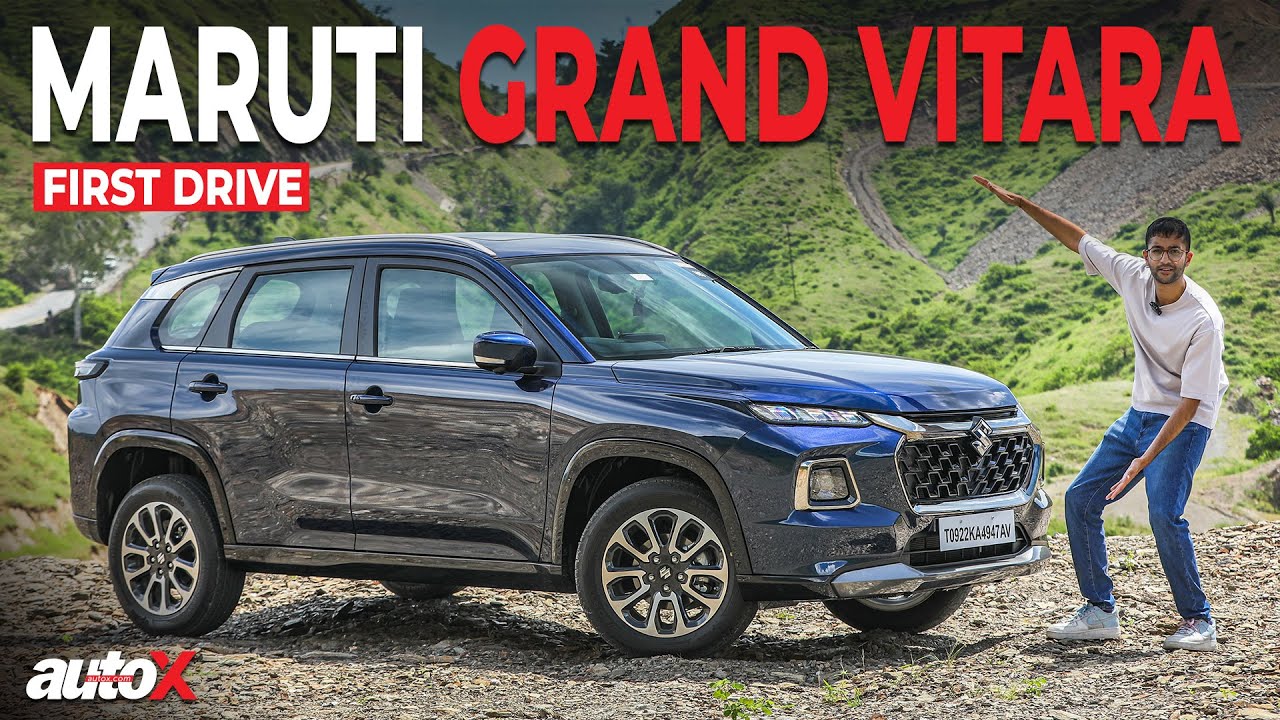 X-Factor: The mild-hybrid Grand Vitara misses some features, but has the option of all-wheel-drive and adequate highway performance. 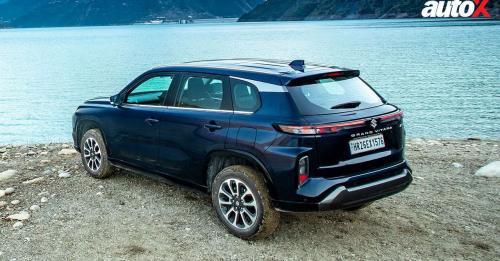 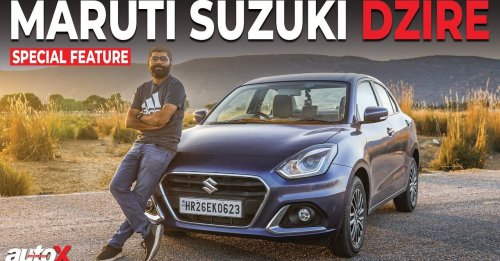