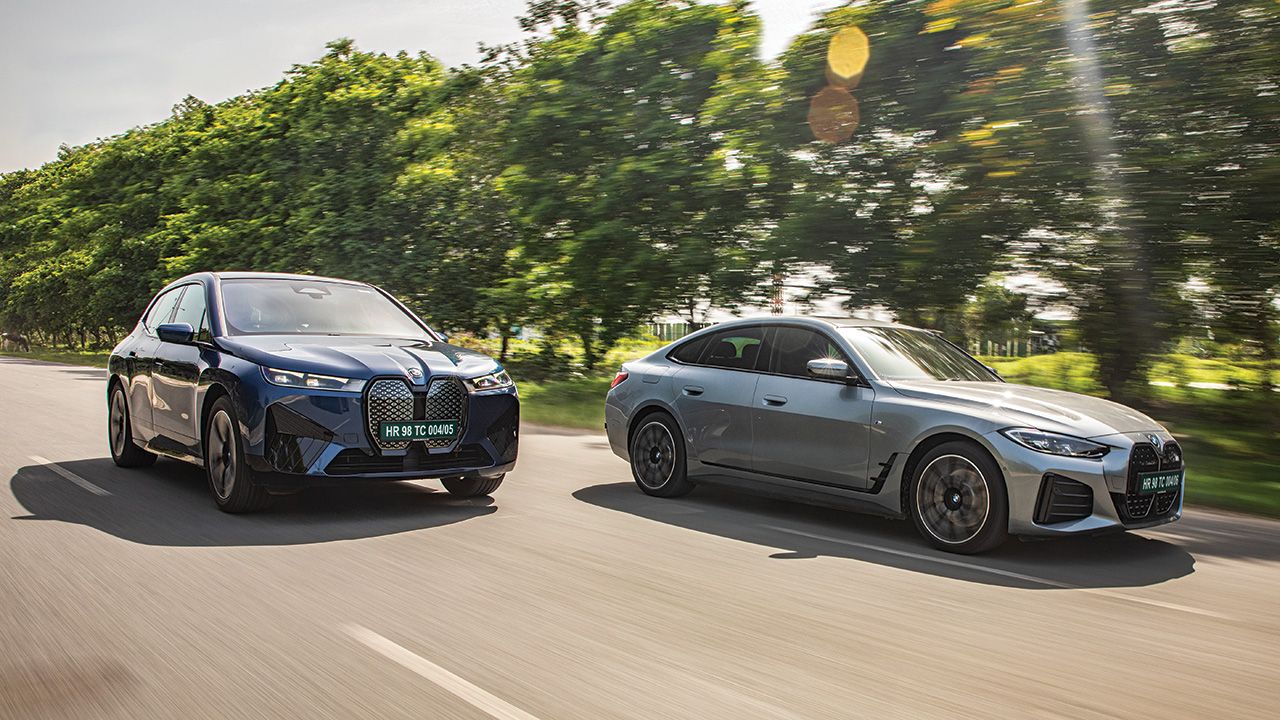 Will BMW remain the ‘Ultimate Driving Machine’ in the now-imminent electric age?

The definition of the ultimate driving machine is changing. Or in other words, BMW is on an electro-offensive, as Munich is aiming to double its battery-powered electric vehicle or BEV sales in 2022. But that should be a piece of cake, given that BMW Group EV sales (including Mini Electric) have grown by a whopping 110% in the first half of 2022 – the company shipped 75,891 fully-electric vehicles around the globe between January and June. If you’re dreaming, and saving up, to buy a BMW in near future, chances are that it may very well be an electric one.

It’s a predicament for the future, no doubt, but it still leaves everyone who loves driving with a question – will new-age BMW EVs be able to match their ICE counterparts in terms of driving appeal? So, to find out – or just to have an idea if such a thing is possible at all – we took BMW’s brand-new electric offerings in India, the i4 and iX, for a spin around town.

While the iX came to India first, it’s the i4 that marks BMW’s transition from ICE to electric. And that’s because it’s conventional in many ways. For instance, it’s based on the current-gen 3 and 4 Series, meaning it’s not a bespoke EV platform. That said, the platform has been thoroughly revamped to incorporate electric motors, and the suspension has been retuned, obviously. Since the i4 is more or less an electric version of the 4-Series, the styling is conventional too. However, calling it ‘conventional’ is a bit of a stretch because, like many modern BMWs, the i4 has a somewhat controversial design. 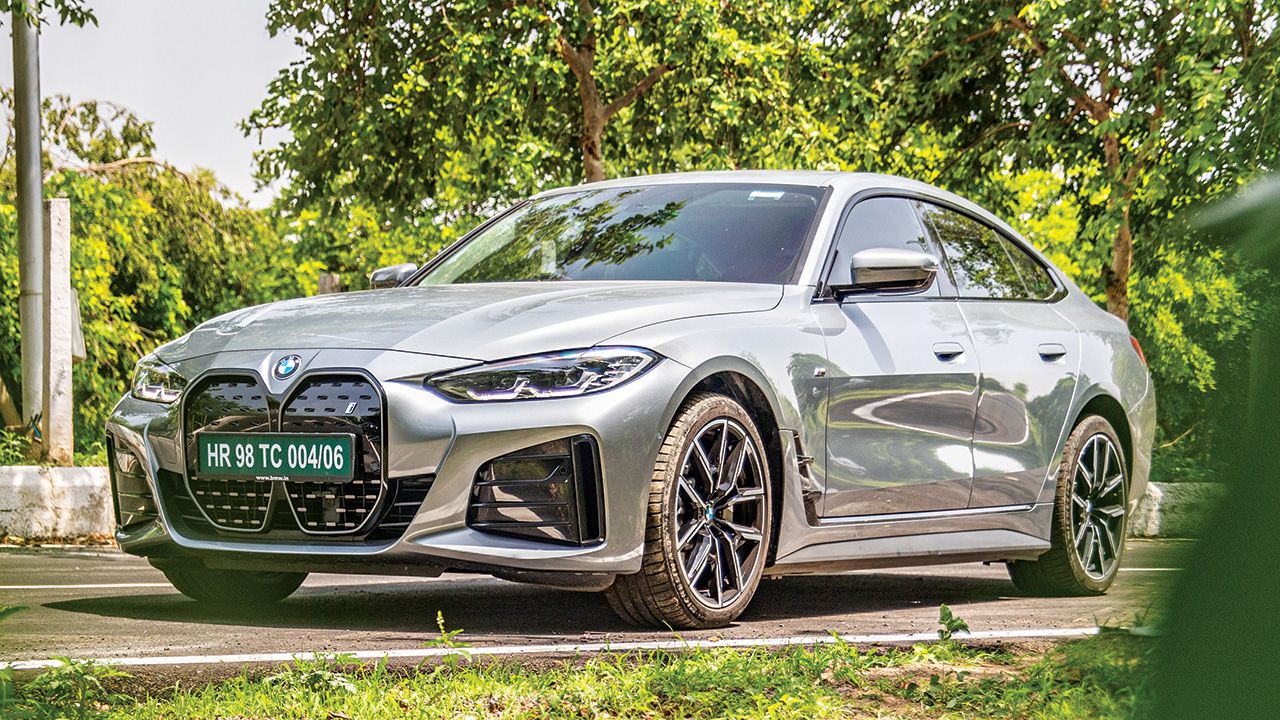 A flared kidney grille headlines the front end, but since it’s an EV, it’s closed off. The overall silhouette of the sedan is sporty, and, truth be told, it’s not as obnoxious looking as the internet wants you to believe. Plus, the i4 you see on these pages was kitted-out with the optional M Sport Package – black accents, 19-inch wheels instead of standard 17’s, etc. – so it looks quite pretty. Overall, the i4 is a stunner. Not just because it’s an EV, but because it looks handsome and sporty, just like a BMW is supposed to be.

The iX, on the other hand, is nothing like a BMW, at least in terms of design. Everything about its styling is so provoking and radical that it makes the i4 look like a beauty queen. The kidney grille is a whole lot bigger, and it looks as if it will swallow everything that comes its way. That said, its grille may be too big and non-functional in the conventional sense, but behind the sealed stuff, it packs cameras, radars, and sensors. It even has a ‘self-healing’ feature, which can repair minor scratches on its own! 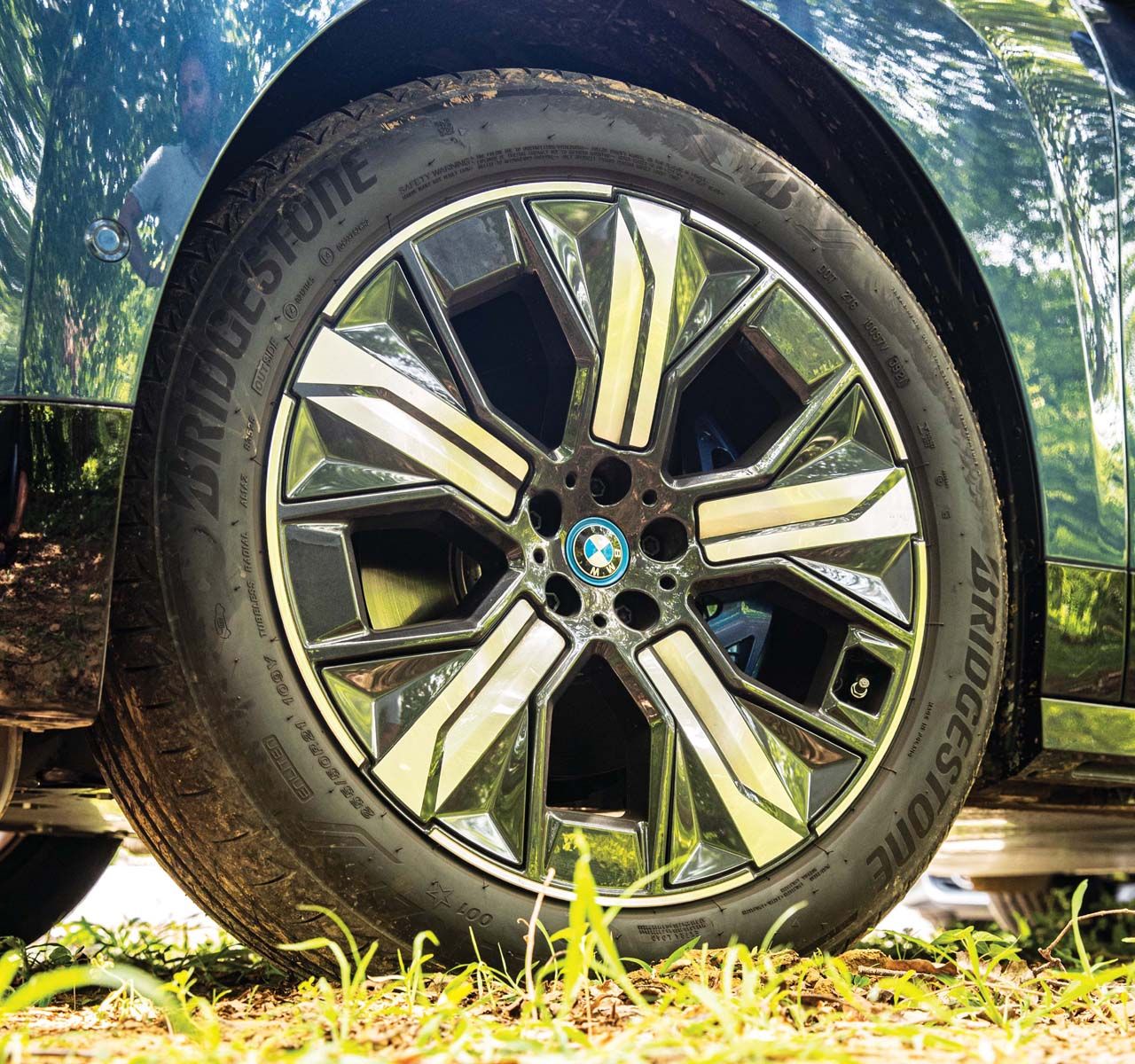 All in all, the iX definitely stands out more – not just from the i4 but from every other high-end EV on sale in India at the moment. It definitely grabs quite a lot more eyeballs than any other BMW on the road too.

When you step inside the iX, be ready to be bowled over. It’s a concept car that has come to life. From its hexagonal steering wheel and XL-size HD curved display (comprising a 14.9-inch infotainment screen and a 12.3-inch digital driver display) to exquisite upholstery, sofa-like seats, and crystal buttons, everything about this interior is sensational. It’s a lounge on wheels – a five-star one at that. The display runs on BMW’s latest iDrive OS 8.0 and is one of the finest car screens on the market. 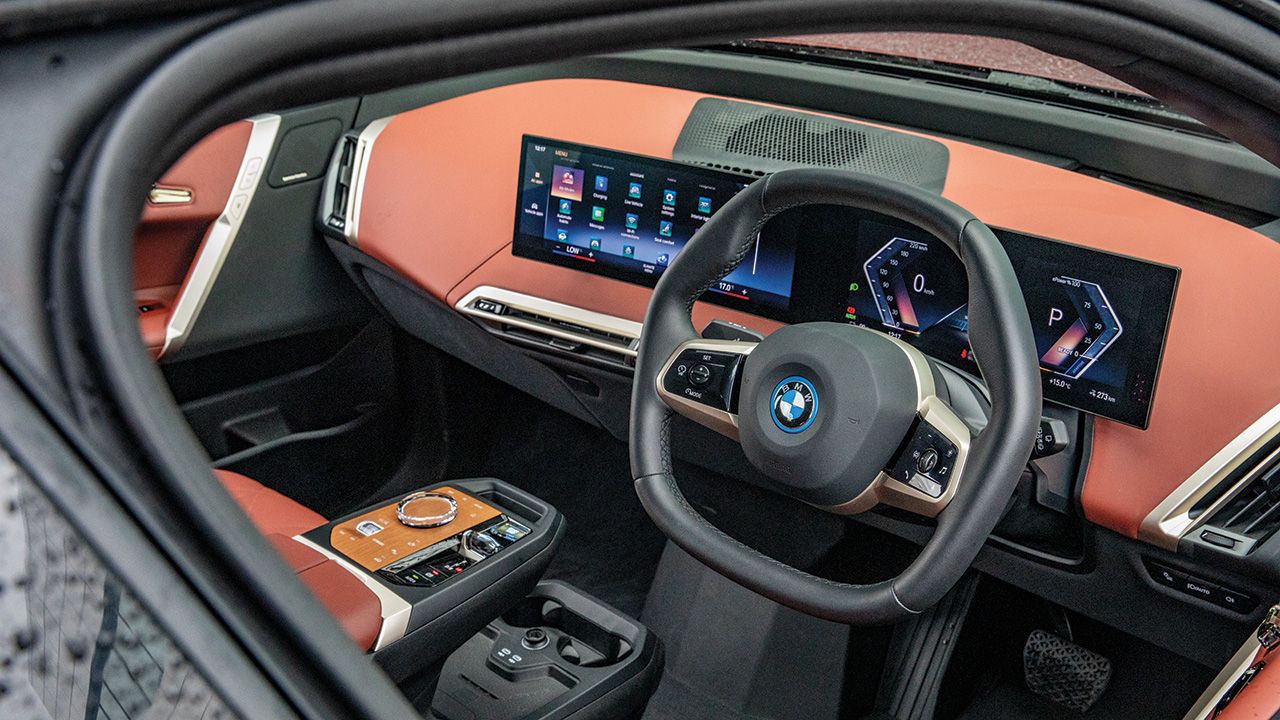 Since it doesn’t share anything with a conventional BMW, the iX’s floor is low and flat, which translates into acres of space for back seat passengers. It’s a pretty sumptuous place to be. Talking about sumptuousness, the iX gets a larger-than-life glass roof, which can turn opaque at the press of a button. I must say that it’s the most radical – and I mean it in a good way – cabin in any EV that’s available in India.

In comparison, the i4’s cabin isn’t as revolutionary, but it packs more tech than your run-of-the-mill 3 Series. It gets the same curved display as the iX, but the rest of the cabin is pretty similar to the 3. Being a coupe, the rear seat is a bit cramped, and since it’s based on the 4 Series, there’s a prominent transmission hump at the back, which eats into the leg space of the third/middle passenger. At the front, it’s a usual BMW sport sedan/coupe affair though – you sit low in a sporty driving position, which sets the mood even before you start driving.

BMW offers the i4 in its ‘base’ eDrive40 variant in India, meaning it’s a single-motor version. The good news is that it’s mounted at the back, so it’s a classic BMW rear-wheel drive layout. The motor is powered by an 83.9kWh battery pack and is rated at 335bhp and 430Nm. Official figures suggest a 0 – 100km/h time of 5.7 seconds, but since it’s an EV, the kind of g-force it pulls while picking up momentum…well, it can rattle your dental fillings! More than the performance, it’s the silence and refinement that is astounding here. Before you know it, you’ll find yourself going way past the maximum speed allowed on our highways while sitting in a cabin that’s quieter than a meditation centre.

That said, it doesn’t quite impress you, like a conventional BMW, with its emergency braking – something that’s easily experienced considering how briskly it gets up to ludicrous speeds. The pedal has a very wooden feel to it, but it’s not something unique to the i4 – in fact, it’s quite common in electric cars with regenerative brakes. Plus, the fact that it weighs over two tonnes doesn’t help its case. In the city, though, the regen system allows you to drive the i4 with just one pedal, so that feels good. 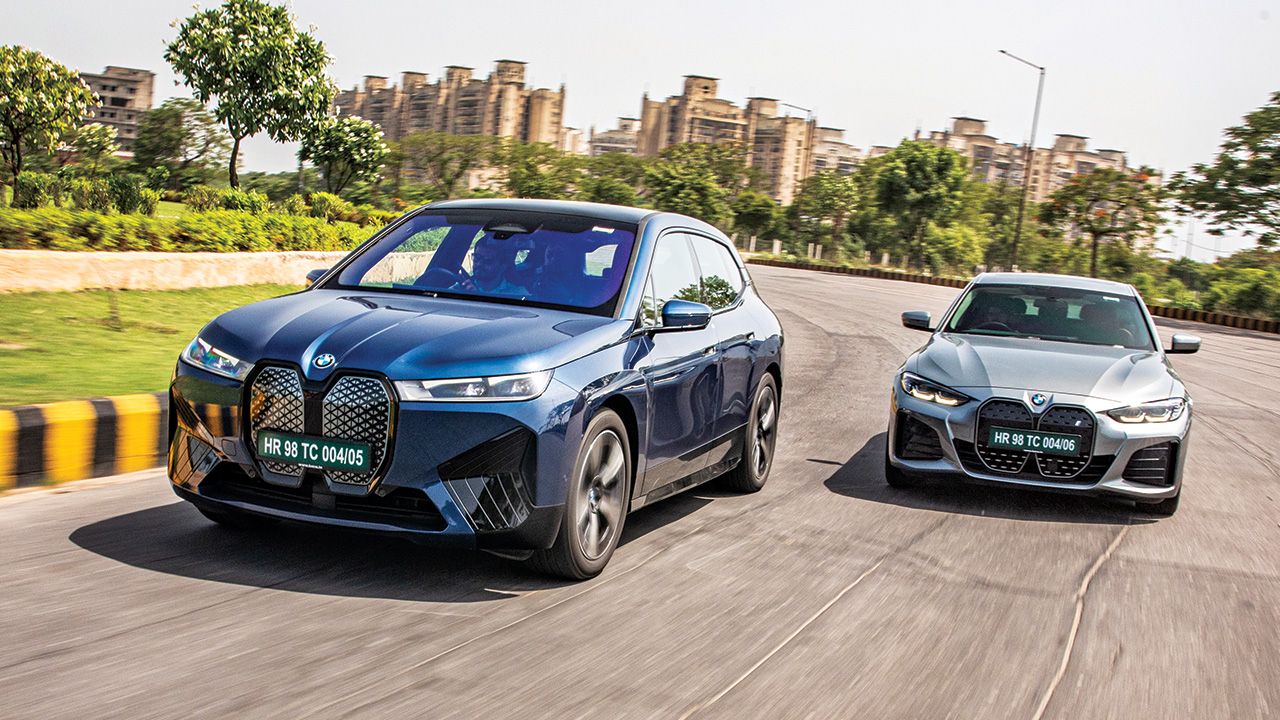 As a driver’s car…well, let’s cut straight to the chase, the i4 is a proper hoot. Despite being much heavier than the regular 3 series, the handling is taut and precise, and it grips the road really well. I’d even say that the front-end is pointier and more eager than that of the regular 3 Series. The steering, too, is direct and precise and offers decent feedback. Given its electric underpinnings, it’s uncanny how beautifully the i4 drives. It’s a BMW in every sense!

In daily driving conditions, the i4 is nearly as comfortable as a 3 Series, but it’s not quite there yet. Despite featuring air suspension at the rear axle, the low-speed ride can be jittery over bad roads. At higher speeds, the ride is flatter and more absorbent.

When you switch from the i4 to the iX, it doesn’t take you long to realise that it’s different gravy altogether. There’s still a whiff of BMW about it, but in terms of driving experience, the iX is in a totally different dimension. Part of the reason why it feels so different is that, unlike the i4, the iX doesn’t share its platform with the regular X5 – it’s built around a dedicated EV architecture, which also explains its outlandish appearance. 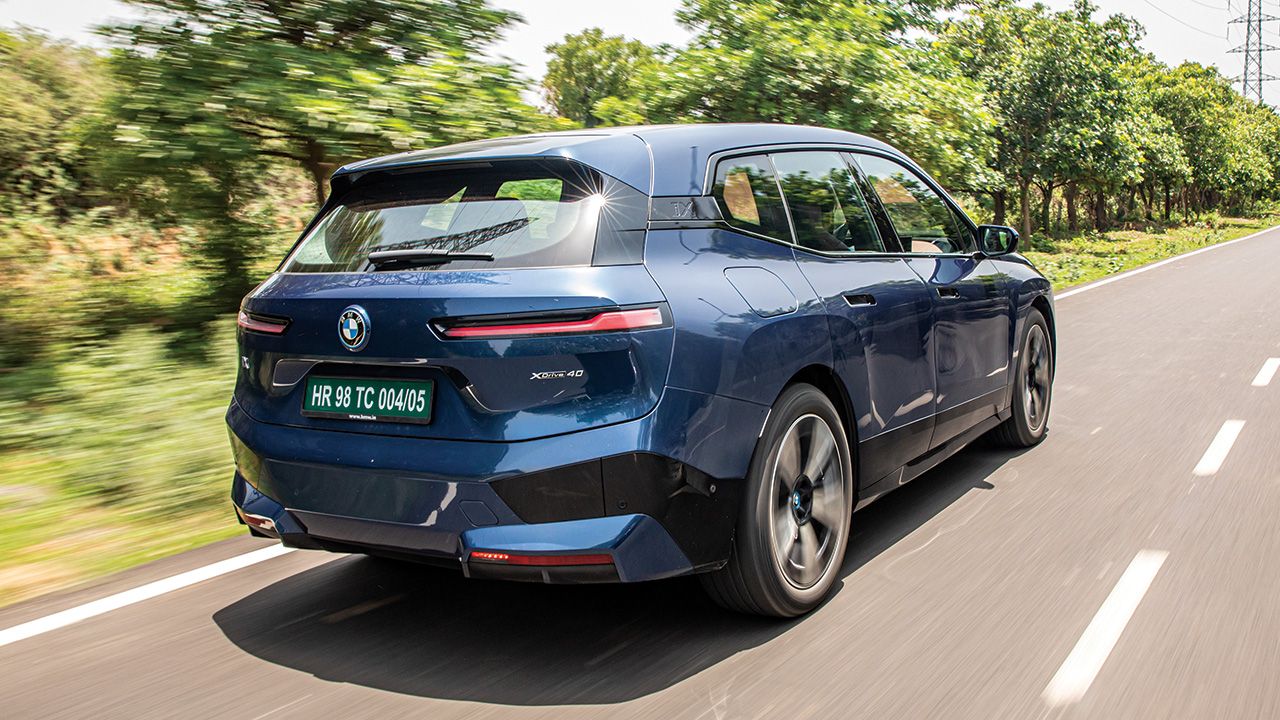 Even though it weighs in excess of 2.5 tonnes, the iX’s turn of speed is more fluid, than the i4. Like the sedan, the iX is only available in a single xDrive40 variant. However, it’s got a smaller 76.6kWh battery pack and twin motors, making it all-wheel drive. Its peak power output stands at 322bhp, but the system develops a monstrous 630Nm of torque. It isn’t quite as quick as the i4 – and nor does it feel that way – but with a 0 – 100km/h time of 6.1 seconds, it can run its low-slung sibling very close.

Because it’s heavy and high-riding, the iX is nowhere near as nimble or athletic as the i4, but even then, it’s beautifully tied down – you can sense that BMW engineers have peppered the iX with some of their signature magic. However, what’s even better with the iX is that it’s a full-blown and finely crafted luxury EV. And it’s clearly reflected in the way this SUV rides. It glides over undulations and bad roads without a care in the world – quite remarkable, considering the xDrive40 rides on steel springs instead of air suspension! What’s even more remarkable is the way it isolates you from the world outside – you hear absolutely nothing inside at any given speed.

While the i4 and iX seem to be two peas in a pod, they go about doing their jobs differently. The i4 is more of a transitionary phase and more driver-focused, whereas the iX is a true representation of BMW’s electric age – ultra-luxurious, radical, and supremely enjoyable when you get behind the wheel. Sure, their new-age bucky beaver designs will take some time to get used to, but as long as they can offer sheer driving pleasure in the electric age – which is what the i4 and iX do – BMW will continue to be the ultimate driving machine.

X-Factor: A five-star lounge-on-wheels that can plaster a wide grin on your face should you decide to take the wheel! 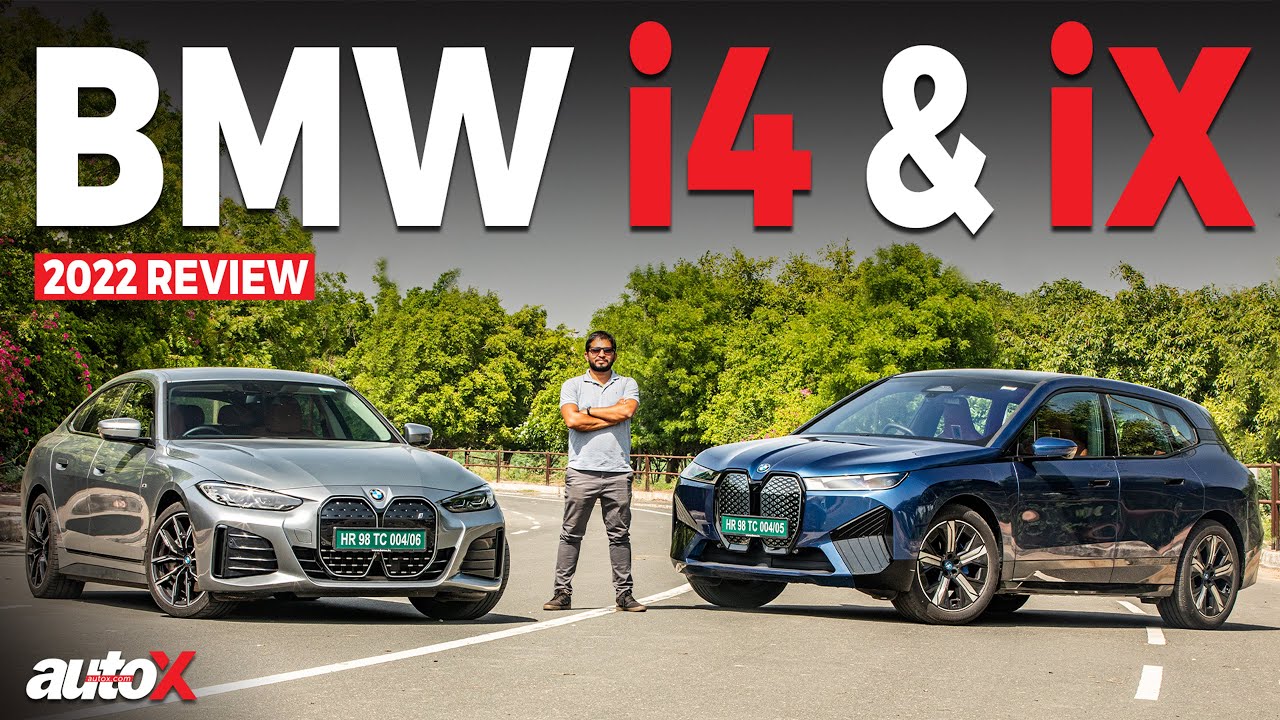