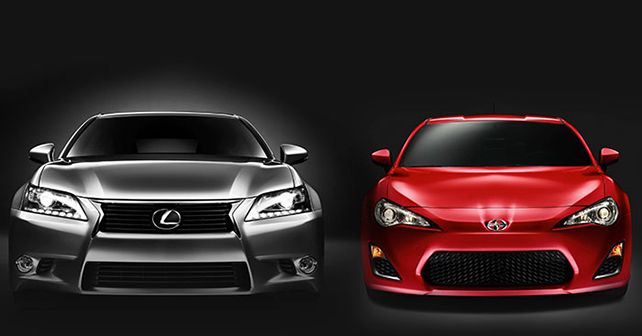 Toyota recently announced that it would postpone plans to bring Lexus to India, but Anniruddha Jain can only hope that they reconsider. Moreover, we join him in pleading with Toyota to bring the GT86 to India – known as the FR-S in the US. Here’s a glimpse of the Lexus GS350 and Scion FR-S from the other side of the planet.

Think of Toyota, and the first words that come to mind are – reliable and efficient. Indulgent and sporty are adjectives not usually associated with the brand. So, in 1989, Toyota launched Lexus to make its presence felt in the premium market. Toyota has worked tirelessly over the last two decades to make Lexus a premium luxury brand, and today it’s sold in over 70 countries globally.

After achieving success with Lexus, Toyota launched Scion – a sub-brand whose aim was to get young American buyers into the Toyota fold. Scion was launched in the US in 2002 to attract generation Y by offering exciting products and a simple, hassle-free buying experience. Scion cars were offered with fewer trim options and simplified pricing that eliminated the need for long negotiations. Scion’s simplistic approach resonated with its target customers, and it’s been a resounding success in the US. We tested the Lexus GS 350 and the Scion FR-S in California, and hope to see them both in the Indian market at some point in the near future.

In the US, from 2000 to 2011, Lexus was the number one luxury brand in terms of sales for 11 successive years. Keeping Audi, BMW, and Mercedes at bay in the most important automotive market in the world is no mean feat. It speaks to the quality of the brands’ products, as well as the prestige of the marque. Despite the fact that Toyota has delayed its plans, it’s only a matter of time before Lexus officially enters the Indian market, and it’s first salvo could very well be the GS.

We tested the GS 350 in California, and drove it from San Francisco to Shelter Cove – a thousand kilometer round-trip through some of the most majestic redwood trees on the planet. I first saw the new GS at the 2011 Pebble Beach Concours d’Elegance, and was immediately impressed by the car’s bold and dynamic styling. The front grill has an aggressive look with styling cues from the LFA. With its short overhangs the car is well proportioned and has a strong stance. It’s a good looking car, and people came up to me more than once to admire it and get a closer look.

On the inside, the GS’s cabin envelopes its occupants in luxury. The quality of materials is impressive and the fit-and-finish is top notch. Standard equipment includes a new energy-saving auto climate-control system called S-Flow that uses an occupant-detection system to focus airflow only to the areas where passengers are actually seated – a first-in-class technology. The dashboard is dominated by a 12.3-inch split-screen, high-resolution multi-media display. It’s an ultra large screen, and is big enough to support simultaneous, split-screen viewing of a large map displays plus audio, climate or other vehicle information. I personally find a head-up display more efficient from a drivers’ perspective, however the screen in the GS is certainly more impressive than systems that most competitors offer. For audiophiles, a 17-speaker Mark Levinson surround-sound audio system provides near concert hall acoustics. The heated and cooled programable seats are comfortable and provide plenty of support. The seats are missing a massage function though – something I would have appreciated on longer stints.

The GS 350 comes with a 3.5 liter V6 engine that features four cams, and four valves per cylinder with dual variable valve timing. It’s a gem of an engine that produces 306bhp and powers the GS350 from a standstill to a 100km/h in less than 6 seconds. It has the smoothness and refinement one would expect from a Lexus, whilst providing plenty of power right through the rev band. Sport mode sharpens throttle responses, while improving shift times of the 6-speed automatic transmission. And Sport mode was my favored setting while driving the GS. The automatic transmission does a good job and shift times while using the paddles are impressive. According to Lexus, the transmission incorporates many features adopted from the Lexus IS F high-performance sedan — including faster shifts, earlier torque converter lockup, and downshift throttle blips. While driving aggressively, it’s evident that the GS benefits from this sportier DNA.

In Sport-plus mode, the adaptive suspension system stiffens up the ride. It’s great for extremely smooth surfaces. However, on Californian mountain roads, I found the suspension to be a little harsh in this setting. The GS 350 has an electric power steering system that is typically light at slow speeds, but weighs up as you go quicker.

On this road trip through Northern California, the GS350 never missed a beat and was fun to drive in the mountains. The GS 350 is luxurious and reliable – both virtues one normally associates with Lexus. But, surprisingly, it’s also fun and exciting too – the latter making it a very complete package, and increasing its appeal to those who in the past never looked beyond the German trio of Audi, BMW, and Mercedes.

Earlier this year, Scion launched the much-awaited FR-S. And, if it looks familiar it’s only because it’s actually a rebadged Toyota GT86. We tested the GT86 on the track in Dubai recently, and came away very impressed. We now test the Scion badged version in California to find out if it’s as good on regular roads as it is on the track.

And just as we experienced on track, handling is a key forte of the GT86 – and this is just as true in the FR-S. It’s not surprising given that the two cars are virtually identical, apart from badging differences. The well-sorted chassis makes the FR-S a joy to drive on twisty roads. What’s more impressive is that the engineers have been able to achieve the FR-S’s handling prowess without sacrificing the vehicles ride. More often than not, sports cars handle great but they have a harsh ride that makes driving them on everyday roads (quite literally) a pain in the backside. Not so with the FR-S. On everyday roads, the FR-S’s ride is firm yet compliant. This combination makes it a good everyday car, as well as one that you could drive for long distances without much fatigue. The brilliant steering feel of the FR-S complements the ride and handling characteristics. Together they make the FR-S a great driver’s car that’s especially fun while driving on mountain roads.

The FR-S is powered by a Subaru-developed naturally aspirated 2.0-liter flat-four boxer engine that produces 200bhp and 205Nm of torque. While it gives the FR-S adequate performance, it’s probably the only area where I found the car wanting. The car accelerates from 0 to 100km/h in 6.2 seconds, which is anything but sensational in today’s market. While you need a nice twisty road to be able to exploit a cars handling, acceleration is something that a driver experiences every time he leaves a red light or overtakes another car. The FR-S’s chassis is capable enough, and another 40 or so horsepower would make it near perfect and give the driver an even more exhilarating experience. A more impressive exhaust note would make things more exciting as well. While talking about improvements to the FR-S, a nicer dashboard material would be my other request to the powers that be at Toyota. It might be nitpicking, but in todays’ competitive market, owners want their cars to be near perfect – and the quality of the interiors is an area where the FR-S doesn’t really set any benchmarks.

Our test car came with a six speed automatic gearbox that’s designed to mimic a dual clutch gearbox. Shift speeds are quick and using the paddles is actually fun. While the FR-S comes with two rear seats, they can’t realistically be used by real-live passengers. The rear seats are adequate for storing groceries, and not much else! But, then again, this is a sports car, so I wouldn’t mark the FR-S down for having a limited back seat.

The FR-S offers entertaining performance and style, while being relatively affordable. It’s a well engineered product with tremendous potential. I would personally wait for the higher performance versions that should appear in the next 9-12 months. The additional horsepower coupled with improved interiors could truly make it a competitor to the mighty Porsche Cayman – which, if you think about it, says a lot for this Japanese sports car!