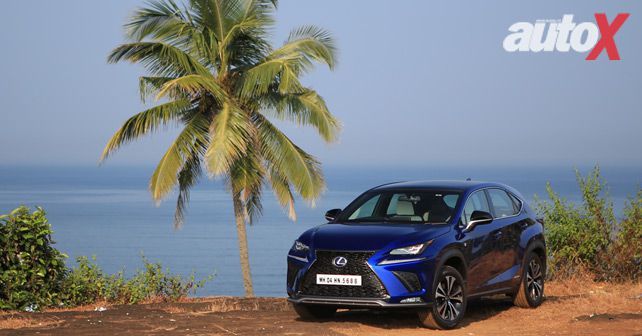 Offering a combination of sharp lines, a size ideal for Indian conditions, class-leading refinement, colour options that stand out – and the capability to make people barf – the NX with its hybrid credentials has a lot to offer to the Indian consumer. Could this be the silver bullet for the Lexus brand in India? Ishan certainly thinks so…

Vivid. That’s not a word you would normally hear when someone’s talking about a 4.6-metre long SUV, but with a look at the latest Lexus SUV in India – the NX 300h – that’s exactly the word that comes to mind. Even more so when you look at the colour choices offered in the NX. With the colour palette offering options such as a bright orange, a lovely red offering (my favourite) and a stunning dark blue – our test car on the drive – vivid the NX certainly is. And adding to that are the sharp lines of the NX’s design, bolstered by the large spindle grille at the front, as well as the LED head and tail lamps. The sharp edges and the aggressive design of the NX certainly lend it a lot of road presence too. 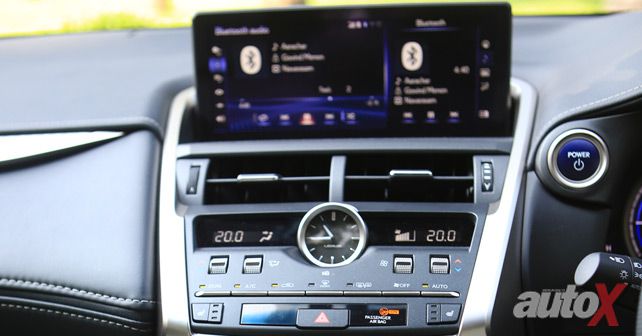 To say that Lexus has taken a different path to introducing itself to the Indian market would be an understatement. Without an assembly plant in India, all of their vehicles are CBU’s, and given our taxation policies, quite expensive compared to what their traditional competition costs. However, when you talk to Lexus India top brass, their goal seems to be clear – to build the Lexus brand and, more importantly, build the customer experience of being a Lexus buyer and owner to an industry leading level – till the time that an investment for a plant or an assembly line can be made into a business case. After all, given the quality levels on Lexus vehicles and the fine attention-to-detail they are made with is something that will never be an easy task to replicate.

And as we step into the NX, we get an affirmation of the quality levels and attention-to-detail that goes into a Lexus product. The shut lines, the luster of the bright paint, the fit-and-finish of the car is absolutely stunning. The one thing that really strikes me, however, is the isolation from the outside environment that you get once you close the hefty door of the NX. Outside noises are simply blocked out when you are in the NX to an astonishing degree, and I think that’s all the better, because it gives the occupants a chance to revel in the amazing sounding Mark Levinson sound system fitted to the car as standard. Not to mention, an isolation from the traffic levels and associated noise we face in India today can only be a good thing. 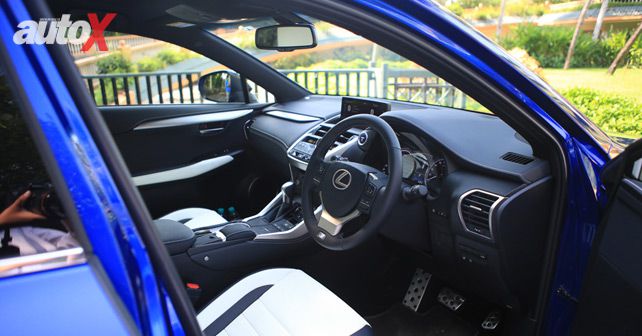 Inside, the NX features the typical styling of Lexus vehicles, but with a small twist. Compared to the joystick controls of the other products in the Lexus lineup, the NX now features a touchpad that enables you to scroll through the various menus and responds to taps and clicks. The new system is a lot more user-friendly than the earlier joystick, which, to be honest, I wasn’t really a fan of. However, even the touchpad takes some getting used to, but because of our propensity to use computers and smartphones, is a lot more user friendly. The seats and much of the interior is swathed in high-quality leather and is generally a very nice place to be in. The NX also offers a very roomy interior with ample space for both front and rear passengers, and the feeling of roominess is further amplified by the huge panoramic sunroof, which gives it an airy feeling. The NX is also the only vehicle in its segment to offer power folding and reclining rear seats. In fact, to suit Indian conditions, the NX even features a full-size spare wheel, albeit it intrudes slightly into the boot space. Additionally, the NX comes quite well-equipped as standard, with eight airbags, various safety systems and even an anti-theft system. On top of that you get the 14-speaker Mark Levinson audio system, as well as a huge panoramic sunroof and a 10.3-inch multimedia display.

The only hybrid vehicle in its segment, the NX 300h is powered by a 2.5-litre Atkinson cycle petrol engine paired with a battery pack and electric motors. Combined, the power plant produces 194bhp and 210Nm of torque. This is paired to a CVT transmission, which behaves unlike any other CVT transmission I’ve driven – and trust me, I hate most of them from the core of my heart – with seamless shifts and virtually no rubber band effect. Pair with that excellent ride quality despite the large 18-inch wheels and the NX makes for a pleasant place to spend time in. 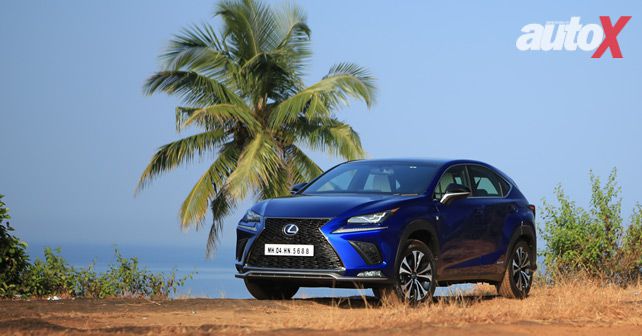 With the ample torque, immediate power delivery, class-leading refinement and a CVT gearbox that actually encourages you to enjoy pushing the car, the NX makes for a really good driving experience. It might not be a sports car, but with a rather direct steering, and a powertrain willing to give the car enough grunt to be driven fast, the NX can make for a fun driving experience. But, here, I must admit to a mea culpa, driving it on the twisty, winding roads of Goa, I got a bit excited and worked up quite a pace with the NX, which didn’t go down rather well with the technical executive from the manufacturer accompanying me in the car – the poor gentleman had to request for the car to be stopped so he could barf the contents of that morning’s breakfast out without spoiling the interiors of our test car. In my defence though, before I started driving spiritedly, I did warn my companions to let me know if my driving made any of them queasy…

Anyway, potential regurgitation issues aside, the NX delivers a very compelling and satisfying package for the Indian customer. In my opinion, it is the perfect size of car for our roads and traffic, and given its high ground clearance and very fine ride quality, it is a car ideally suited for India whether you’re driven or drive yourself. Add to that the quality levels that Lexus pursues with its Omanatashi processes and the customer experience they focus on, as well as that kick-ass Mark Levinson audio system and the NX makes a lot of sense for our market, especially given the price bracket – circa 60 lakhs – which Lexus has indicated for the car. However, there is a catch that might be a problem for Lexus, as the NX is not yet planned to be offered in a diesel version, which might be a turn off for some buyers. But, with regulations and policy decisions turning against diesel in India and worldwide, that might not be that large a factor in the near future.

So, what do I think of the NX’s prospects in India? Well, let me put it this way, earlier in the year I drove the new Volvo XC60 and thought it was easily going to be the class-leader in its segment when it came to India, which it does in a few weeks. Now, I can certifiably say that with the NX 300h, the XC60 and the other competitors have a lot more to worry about than they thought a few months ago.