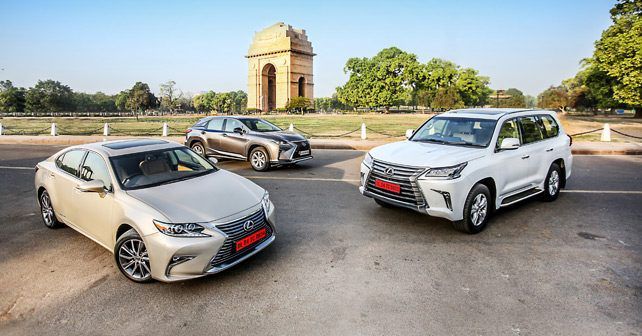 Lexus has finally driven into India, but they’ll have their work cut out for them in what is a very competitive market. We get our first taste on the streets of the Capital to see if they’re up to the task.

In 1983, a few years after developing the very successful Toyota Supra sports car, Toyota chairman Eiji Toyoda issued a challenge to his engineers to build the world’s best car. The new project was called the F1, and it was responsible for the creation of the legendary LS400. With the help of more than 5,000 designers, engineers, technicians, and support workers, the luxury vehicle division of Toyota was formed and it was called Lexus. Since its debut in 1989, the Japanese luxury marque has routinely set the industry quality benchmark.

Lexus was the first carmaker to introduce premium audio systems in all their models, and they were also the first to introduce LED headlights, as well as 8-speed automatic transmissions in their production vehicles. They also created new safety systems that no one else was using, and consistently had the best customer service on offer. They were the first brand to offer pick up, repair and return cars to customers free of charge. They also flew personnel and rented garage space for owners in remote locations. These are perhaps only a few reasons why they went on to become the best-selling luxury brand in the US for 11 consecutive years – beating the German trio of Audi, BMW and Mercedes!

Today, Lexus operates in 90 countries and is the fourth largest luxury car manufacturer in the world. It’s also the second largest luxury car brand in the US market. For the Indian market, Lexus has decided to bring in their hybrid models, and have launched the ES 300h hybrid sedan and the RX 450h hybrid crossover SUV. They’ve also brought in the massive LX 450d SUV.

However, with European luxury car brands already well established here in India, Lexus might find it a bit of a challenge to win over customers – especially since all their models come in as completely build units (CBUs), and consequently will be priced much higher than their competitors.

We managed to get our hands on these vehicles thanks to the Lexus New Delhi dealership. And while this isn’t an in-depth test, we were able to spend enough time in these vehicles to see how they measure up on our roads. 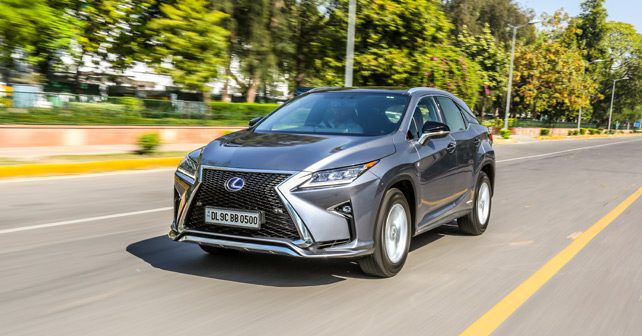 The Crossover
Lexus RX 450h
The RX range was launched in 1998, with the hybrid version arriving in 2005. An interesting fact to note is that Lexus was the first manufacturer to enter a production hybrid vehicle in a race with the RX 400h at the legendary Nürburgring 24-hour race in 2005. This hybrid made headlines around the world and proved the quality and reliability of Lexus vehicles once again. The RX is now the most popular Lexus model sold in the world and is also one of the highest selling cars in the US market.

The RX 450h looks fresh and modern thanks to its angular design. And it’s also got some very nice features. The Luxury trim RX model gets navigation, a wireless smart phone charger, 20-inch alloys, and a 15-speaker Mark Levinson audio system that sounds absolutely phenomenal. In F-Sport trim, which is what we were driving, the car gets a number of sporty touches as well – such as lightened alloy wheels, sports-tuned suspension, a body-kit and sports seats. 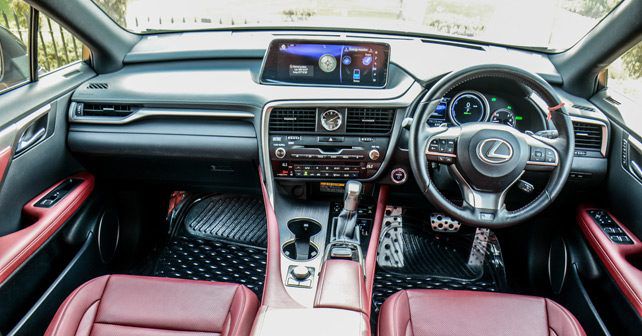 The interiors of the RX speak a luxurious tone, and, while it’s not the most spacious, it’s certainly extremely comfortable. The seats are very comfortable and supportive, and the dashboard design is also attractive while using very high quality components. It comes with a Hybrid System Indicator, which displays real-time information about power output and regeneration.

The RX 450h uses a 3.5-litre V6 petrol engine paired with an electric motor, resulting in a total output of 308bhp. The powertrain is quite impressive with decent grunt that allows for a 0-100km/h acceleration time of well under 8 seconds. The petrol engine is also very smooth and refined, yet it has a nice growl to it. The CVT works surprisingly well in the city, and the steering feels quite precise and well weighted. For the most part, the adaptive air suspension does a great job but it does seem to crash through some of the larger bumps – perhaps a result of the sport suspension. That said the RX is the most engaging of these three models from behind the wheel. 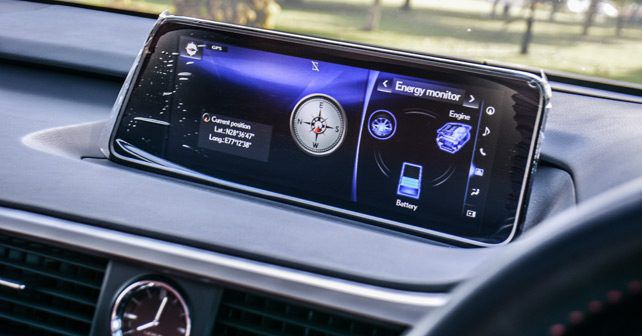 The RX actually makes a great city car. It’s just the right size, has plenty of ground clearance, looks extremely stylish and allows you to fly the green flag too. We wouldn’t recommend venturing too far off the beaten path though – for that, keep on reading.

The real trouble with the RX, again, lies with the price. At over a crore, not only does it have the more spacious and powerful Volvo XC90 Hybrid to contend with, but it also puts itself in contention with similar sized SUV’s from the Porsche stable. We’ll just have to wait and see if the Lexus badge and the striking looks of the RX can fend off the competition. 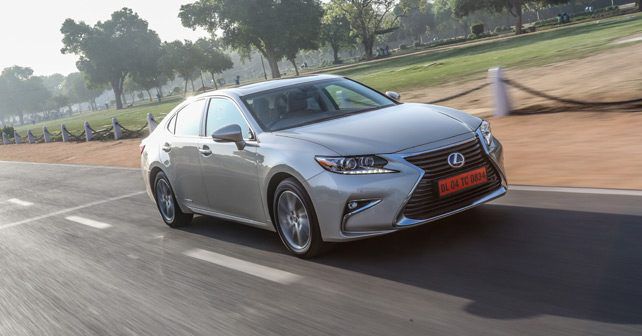 The Sedan
Lexus ES 300h
The ES is essentially the Camry in a party dress, and was launched with the LS way back when the Lexus brand was formed in 1989. During the brand’s early years, it became its top-selling model. The hybrid version wasn’t launched until its sixth generation was introduced in 2012. The front grille of the ES 300h gets the hourglass design that’s typical of all Lexus vehicles. And of course, compared with the Camry, it also gets the Lexus touch in terms of a much more luxurious cabin with a lot more to offer in terms of features, technology and safety. 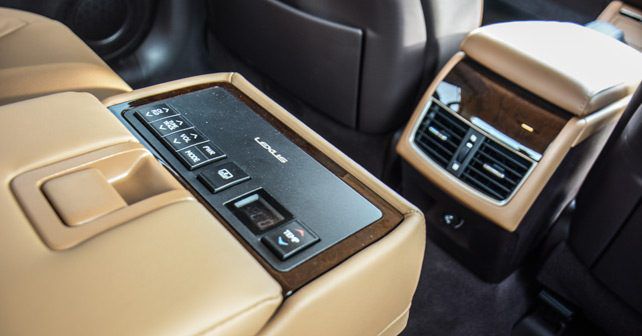 At the core of the ES 300h is the same powertrain as in the Camry Hybrid, which is a 2.5-litre petrol engine with an electric motor that pumps out a total of 202bhp. The powertrain is smooth and seamless, and always quiet. When in EV drive mode, the car will only use the electric motor at very low speeds. But, even at higher speeds when the petrol engine is in full swing, it’s still very quiet. It also gets a CVT transmission that does its job just fine. The acceleration is adequate, and the steering feels better weighted than in the Camry – although it doesn’t provide any real feedback. Of course, the car isn’t meant to be a thriller to drive. Its purpose is to be a very comfortable and efficient luxury hybrid, and it does that job perfectly.

If the Camry is one of the most refined and relaxing cars on the road today, the ES just takes it up a notch. The question is, will customers be willing to fork out almost 20 lakhs more than the Camry Hybrid for its Lexus avatar? That remains to be seen. 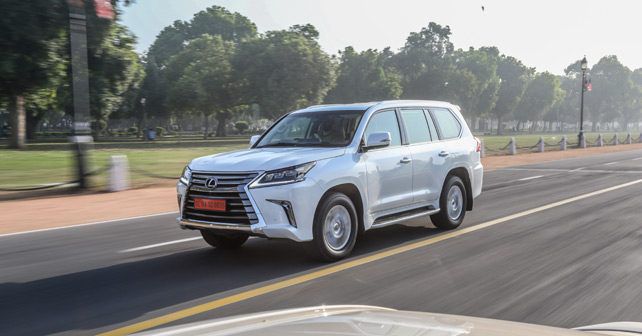 The SUV
Lexus LX 450d
The LX is the biggest and baddest wolf from the Lexus stable, and it’s basically a glorified luxury version of the legendary Toyota Land Cruiser LC 200 – which is one of the most capable full-size SUVs ever made. If you want to cross the Australian Outback in sheer opulence, this is the SUV to have.

The LX is not only bursting with capability, but also overflowing with features. It’s literally raining buttons on the centre console. There are so many knobs and buttons just for off-road work. The car has permanent 4WD with a locking and torque sensing centre diff, as well as height-adjustable air suspension – all of which is controlled from the centre console. Sadly, on this occasion, we weren’t able to take the car off road for it to prove its mettle. 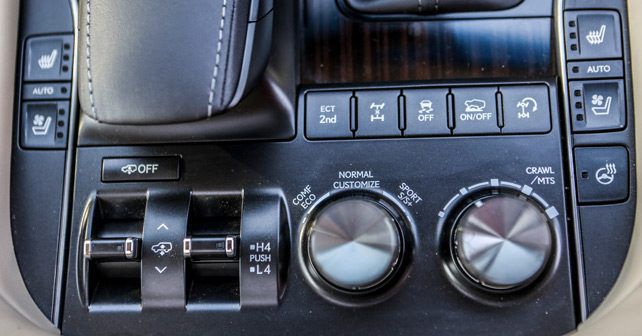 The LX gets a 4.5-litre V8 diesel with a power output of 261bhp and 650Nm of torque. The engine does seem rather tame and quite friendly when in the city, but if you push it in the right places, or switch to sport mode, it comes to life with renewed vigour.

The LX will certainly get you noticed and will take you anywhere on the planet in comfort and style, but, again, Lexus will really need to focus on setting itself apart from the competition – which seems to be quite fierce in the luxury car segment in India at the moment. The LX carries a rather hefty price tag, which could get you a list of other fine luxury cars – maybe even a few exotics.

Lexus will need to play their cards right if they want to challenge the competition. The brand is already quite well known in India, and they have an impressive line-up. They do, however, have a huge handicap in terms of their pricing – and that’s something they’ll have to address in future. It’s going to be tough to take on the Indian luxury car market, but it’s a challenge that Lexus seems to have accepted because they have always had tremendous faith in their products – and rightly so! They’ll have to cash in on the fact that there’ll be a fair amount of novelty to begin with, because the Lexus launch has been anticipated for some time now. These machines will, of course, bring their legendary reliability to the Indian luxury market. And, for what it’s worth, they’ll probably be more affordable to run than many of their European counterparts. Oh, and the ACs will likely be able to take on the sweltering summer heat better than their rivals from Europe. The question is whether or not these factors be enough to justify their price premium – and that’s something only time will tell.

X-Factor: The most silent, refined and comfortable everyday car on the market just took it up a notch. But it will cost you!

X-Factor: The go-absolutely-anywhere-in-luxury-and-comfort machine – the LX is based on one of the most legendary SUV’s out there.