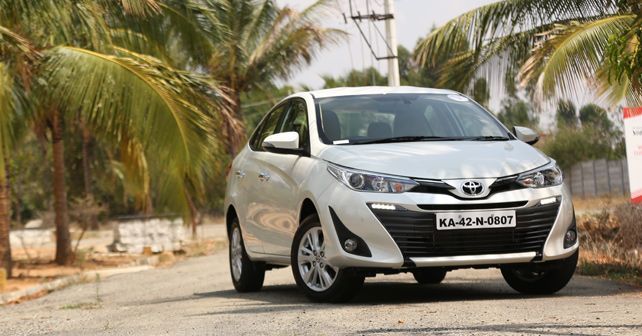 With the Yaris, Toyota India moves into uncharted – and rather competitive – waters. But, can the Toyota badge, and it’s shrunken-Corolla appeal, lead to a change of guard in the segment? We drive one to find out.

The Indian automotive market can sometimes be very tough and unforgiving. Unless manufacturers bring something distinctive and unique to the market, Indian customers are seldom impressed. Toyota India had the misfortune to discover this aspect of the Indian market with their Etios range. Despite getting the fundamentals correct, they missed a trick or two in terms of the design and quality, and the result was disappointing – the Etios failed to achieve the success that the company had hoped for.

Today, Toyota officials candidly admit the shortcomings of the Etios and the learnings that it yielded. Therefore, it’s not surprising to see that the Yaris is filled to the gills with features and design touches that work well in the Indian market. There’s the beige interior of course – which people love, though not I – as well as lots of rear-seat legroom and plenty of segment firsts. 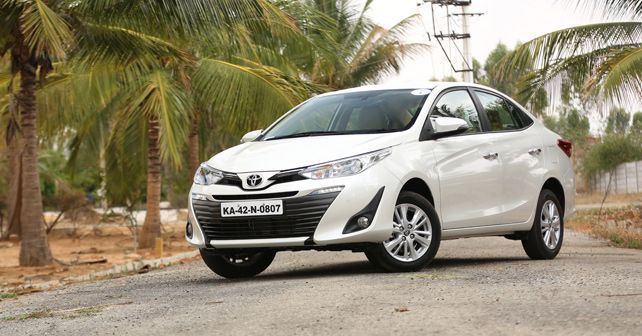 Beginning on a good note, I think we should commend Toyota for focusing on what is one of the most important aspects of driving in our country – road safety. The Yaris comes with a class-leading seven airbags – yes, you read that right, seven. Plus, ABS and EBD is standard across all variants.

In terms of design, the Yaris looks more like a shrunken version of its elder brother, the Corolla Altis – which shouldn’t be taken as a negative. With its non-fussy design, it’s not a car that polarises opinion. To put it simply, it’s a run-of-the-mill Japanese sedan. The lack of excessive chrome around the car is a rather refreshing touch. Projector headlamps are also standard across all versions, however, LED tail lamps are available only on the two upper trim versions. 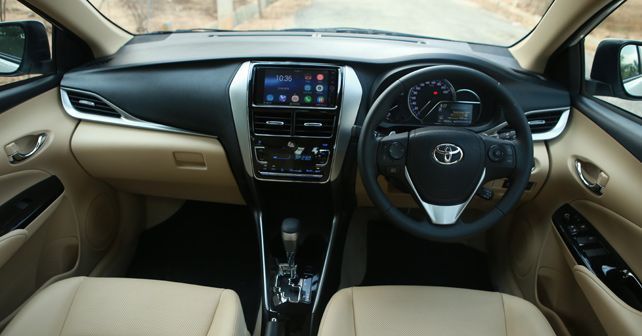 The beige colour provides a sense of airiness to the interior. There’s nothing new in the two-tone dashboard, which is standard Toyota fare. The plastic quality of the Yaris’s interior is fairly good. The switchgear works well and has a hefty feel to it. Interestingly, the interior comes with a couple of interesting features. One such feature is the efficiency display – which shows the amount of money saved after every trip – on the 4.2-inch MID screen in the instrument cluster. It’s an interesting feature indeed, especially for those who share a concern for fuel efficiency. Another feature is the 7-inch touchscreen multimedia system, which still has a flip-down screen and a slot for an audio CD! Globally, Toyota doesn’t offer Apple CarPlay and Android Auto, and so the Yaris doesn’t either. In all honesty, though, in today’s world, where customers have developed a taste for all kinds of connectivity, Toyota is definitely missing a trick here. The screen is mounted at the top of the dash, which means that every time there’s direct sunlight hitting the screen, you can’t see anything on the screen. The multimedia system features gesture control, which is supposed to be helpful in controlling functions like increasing or decreasing the volume, but in our test car I couldn’t get it to work reliably.

One of the best features of the Yaris is its massive rear legroom. However, given the width of the car, I think three full-sized adults on the rear bench will find it a bit of a squeeze.  Headroom is also an issue, as the slanting roof means that you’re bound to scrape your head if you’re over six-feet tall. On the bright side, the roof-mounted rear air vents are a treat, and the air-conditioning system is as good as it gets. 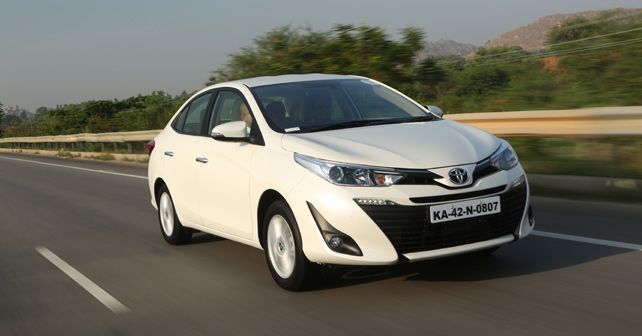 Coming to the power unit, the Japanese manufacturer, in a daring move, has offered the Yaris with only a petrol engine – a move that’s certainly the first in its segment. According to company officials, this decision is the result of the uncertainty surrounding the fuel policy in India. And while that’s a fair point, and while there’s no denying the growing trend back to petrols, I still think it’s a big gamble – as this alienates almost half their potential customers.

The Yaris is powered by a 1.5-litre petrol engine that produces 106bhp and 140Nm. Another segment first is the option of a six-speed manual or a seven-speed CVT automatic across all four variants. The engine is quite refined and works well, especially in urban conditions. We drove only the CVT version, which was a breeze to drive in the heavy Bangalore traffic. However, when you start pushing – and especially when you’re in the three-digit range on the highway – the CVT’s rubber band effect can be a bit of a bother.

Built to be chauffeured

The ride quality of the Yaris is indeed very good – both for the front and the rear passengers. It effectively smothers bumps and is very stable, even at high speeds. The other positive quality is the noise insulation inside the cabin. Once inside, you feel disconnected from the outside world, which is nice. So, with the excellent ride quality, comfortable seats and fantastic air-conditioning, the Yaris is a great place to be chauffeured around.

And I think that’s an appropriate description of the Yaris. It’s comfortable, refined and makes a lot of sense if you’re chauffeured around or if you plan to use it primarily in an urban setting. But, a driver’s car it isn’t. While it’s very comfortable and refined, it doesn’t offer the involvement or excitement that would make you want to just take it for a drive.

But that, I think, was never Toyota’s aim. Considering what the Yaris aims to achieve, I’d say Toyota has delivered quite a good package. And, with its blue-chip brand and a reputation for a superlative ownership experience, not to mention legendary reliability, I think the Yaris will be a very sensible choice indeed.

X-factor: If you’re looking for a comfortable car to be chauffeured around in, the Yaris is the car for you. 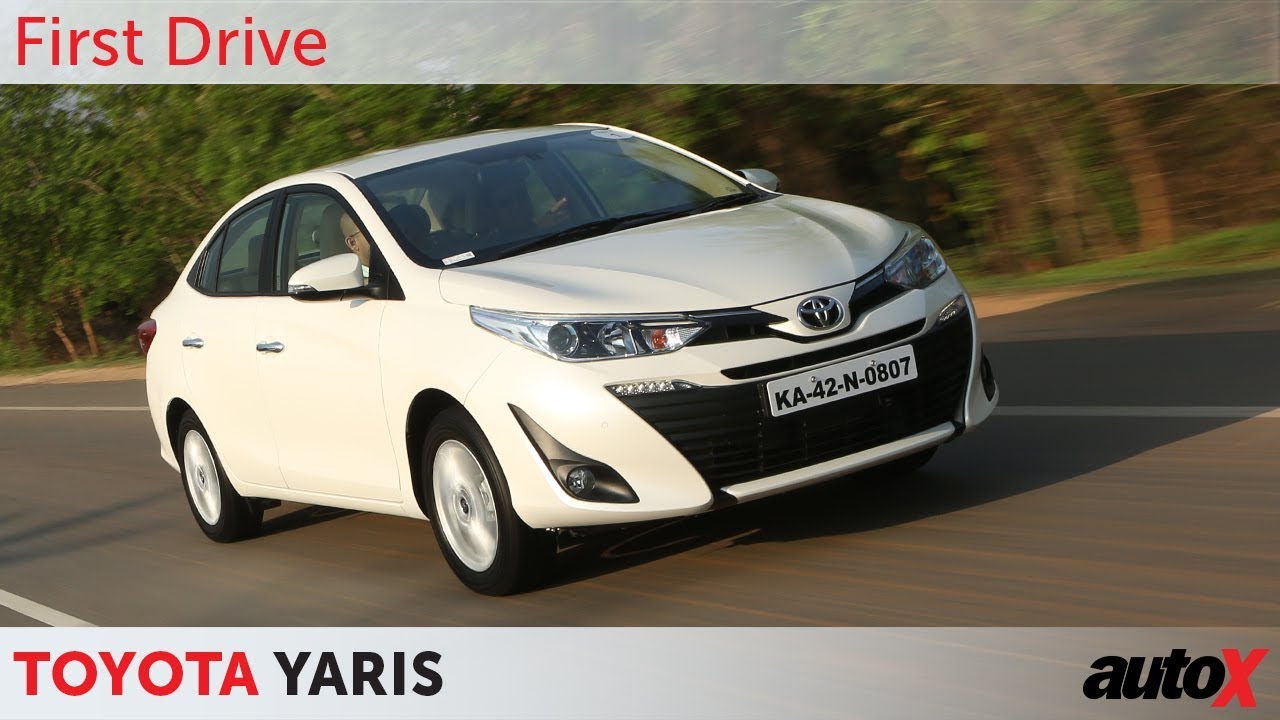