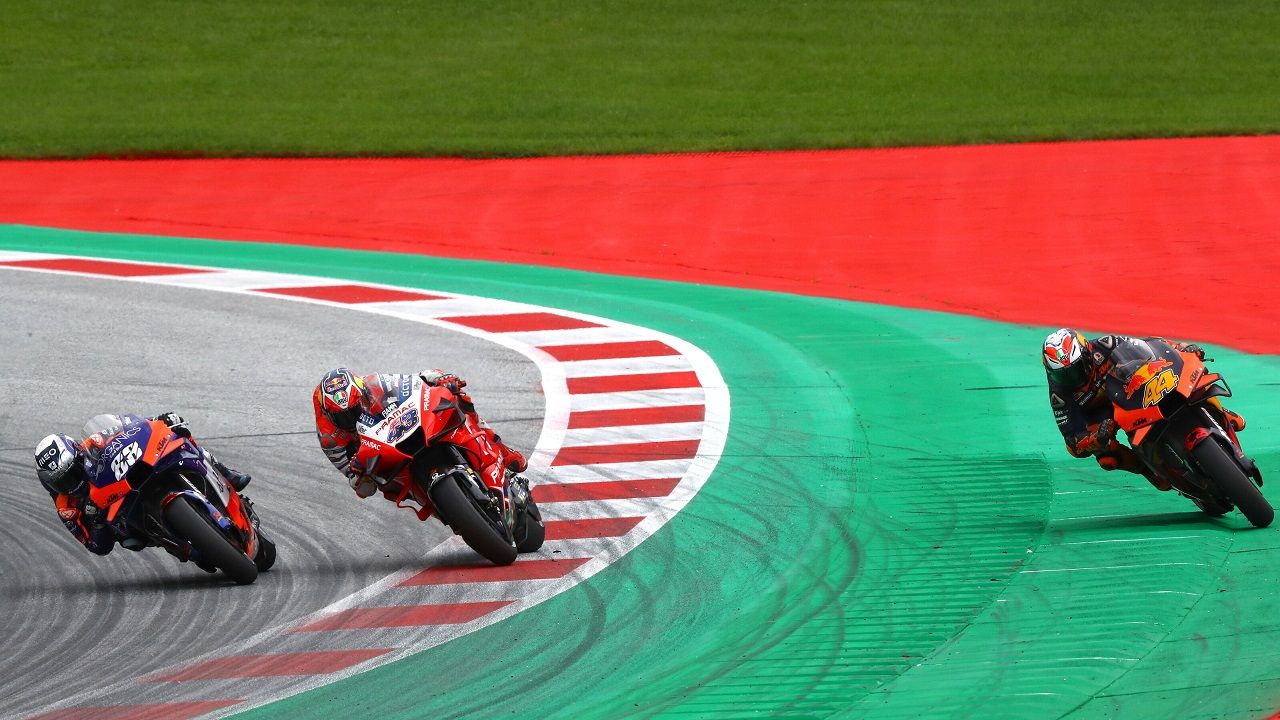 Tech 3 KTM and Miguel Oliveira took their maiden win at the Red Bull Ring Circuit during the Styrian Grand Prix. Jack Miller and Pol Espargaro completed the podium in P2 and P3, respectively.

This year’s MotoGP has been a bit of a rollercoaster ride – and it doesn’t seem things will settle down anytime soon. At the Styrian GP, which was held at the Red Bull Ring (Austria), there was another twist in the tale, as Tech 3 KTM Racing’s Miguel Oliveira claimed his and team’s maiden MotoGP win. The Portuguese rider swept past Pramac Ducati’s Jack Miller and Red Bull KTM’s Pol Espargaro in the last-lap final-corner showdown to claim victory. Miller took the second spot, while Pol had to settle for third.

Like last week, the second round of MotoGP 2020 was an exciting and equally terrifying affair. The race was red-flagged midway since Maverick Vinales had a shock brake failure, which saw him bail out off his factory Yamaha machine at 230km/h on the main straight! The Spaniard was luckily unharmed, but his bike hit the air fence at such speed that it immediately caught fire. With a hazard on the track, red-flags were immediately brought out.

Before the race was red-flagged, Suzuki’s Joan Mir had been leading the race from Takaaki Nakagami (LCR Honda) and Miller. The Suzuki rider had built a comfortable gap from the fighting pair of Nakagami and Miller and was looking to take his first MotoGP win. However, it wasn’t to be.

After the restart, there were only 12 laps remaining. Mir started on pole, based on his position in the race before it was red-flagged. He took the lead again, but Miller overtook him quickly. Miller had switched to soft front and rear tyres before the re-start and had a clear advantage over Mir, who was using the same medium front tyre that had already done 18 laps previously. Not only Miller but even Pol and Oliveira left him behind eventually.

Miller, Pol, and Oliveira then battled amongst each other, but it was the Pramac Ducati and Red Bull KTM riders who were swapping places, while the Tech 3 KTM rider was following them closely. In the second last lap, Pol overtook Miller to lead the race, and the battle between the two raged until the very final corner. Miller took his place back again in the final lap, but Pol made his move right before the penultimate corner. However, he ran wide and so did Miller. Oliveira took full advantage of the situation and swept past both the riders by taking the perfect racing line. Oliveira crossed the line first, taking the 900th premier class race win.

With new race winners every weekend, the championship is now wide open for a number of riders. Fabio Quartararo, who finished today’s race back in P13, is still leading the championship with 70 points, however, Dovizioso in second place is only 3 points behind him. Jack Miller, at 56 points, is currently third in the championship.

In other related news, reigning world champion Marc Marquez will be out of action for next 2 – 3 months, owing to an injury from a crash during the first round in Jerez (Spain). This means he won’t be able to defend his title this year, since the calendar is already very condensed, with the next races being held back to back.