Aprilia bikes price starts at ₹ 93,393. Aprilia has a total of 11 bikes of which 2 models are upcoming which include Tuono 150 and RS 150. The Aprilia RSV4 1100 Factory is the most expensive bike with a price tag of ₹ 23.69 Lakh. Select a Aprilia bike to find out its latest price, specifications, features and more.

Aprilia is an Italian motorcycle company which started off as a bicycle manufacturer after the Second World War. The company was founded by Cavalier Alberto Beggio, who at first intended to manufacture bicycles to ease off his weak financial situation but, all of this changed when his son, Ivan Beggio, joined the company in 1968.

Helped by a small team, it was Ivan Beggio who built the first Aprilia motorcycle, a 50cc model painted in gold and blue. As the model registered moderate success, they continued making motor vehicles and hence, produced the first Aprilia mopeds, the Colibri and Daniela.

However, the first ‘true motorcycle’ from Aprilia was the 50cc Scarabeo motocross bike in 1970 which was produced until the mid-seventies, in different versions ranging from 50cc to 125cc. Despite Scarabeo’s success, what many consider the first true motocross bike from Aprilia did not come until 1974 and this model was tested by Italian racer Maurizio Sgarzani. After undergoing numerous tests, they developed a street bike from this cross model, called the RC 125. This model was presented at the Milan Salon and was very well received by the public.

It wasn't until the 1980s that Aprilia introduced endurance, trial and road bikes to its range. In 1981, they presented the TL 320 trial bike and two years later, the ST 125. Then, in 1984, they released an improved model, named STX and an enduro bike called ET 50.

What is perhaps considered to be the most important motorcycle from Aprilia didn't come until 1998, when the Italian manufacturer launched the RSV Mille, a 1,000cc V2 superbike and a sports tourer called Falco, which also had a 1,000cc V2 engine. In 2004, Aprilia Bike was acquired by Piaggio which gave the brand a big boost in terms of both production capability and technological advancement. The management of Aprilia was taken over by Roberto Colaninno, while the company's founder, Ivan Beggio was made the Honorary President.

Piaggio entered the Indian two-wheeler market in 2015 by launching the first Aprilia two wheeler dealership in Pune in November 2015. This ‘Motoplex’ showroom was the first one from the company in all of Asia. Initially, the Aprilia bike models on offer were the RSV4, Tuono V4, Caponord 1200, Dorsoduro 1200 and the SRV 850 ABS two wheeler. While all these models were pure CBU imports, Aprilia’s first locally-assembled two wheeler, the SR 150, was launched in 2016.

The Aprilia RSV4 and the Tuono V4 now feature a special colour scheme which harks back to the RSV4 1000R Factory from 2006. To know more about the new Ulta Dark editions, read the....

Aprilia has ventured into the smaller-capacity off-road scooter with its SR GT 125 and SR GT 200. The scooter will go on sale in the international market soon, and it is unlikely that Aprilia India....

New colour schemes, a new set of graphics, and more features are a few things that the newly launched Aprilia scooters pack! Read the following to know more about the updated SR 125 and SR.... 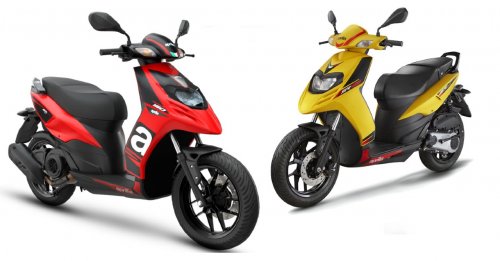 The Aprilia SR 160 will soon get a mild update. Alongside the 160cc scooter, the brand is bringing in two new variants of the Aprilia SR 125 as well. Read the following to know more about the new....