For the global market, the brand will offer the 2023 Leoncino 500 in four colour options: black, red, green, and dark matt grey.

The 2023 Leoncino 500 has been officially revealed by Benelli in Malaysia. The good news is that the upgraded model is set to make its way to the Indian shores shortly. So, without further ado, let's take a look at the key highlights of the upcoming bike.

Speaking of the drivetrain, the 2023 model continues to be powered by the same engine – a 500cc liquid-cooled twin-cylinder engine with 47.6bhp and 46Nm of peak torque – which is paired with a six-speed transmission. The 2023 Leoncino 500 will be equipped with ABS, a fully digital instrument panel, and LED lighting. Moreover, Benelli may also offer smartphone connectivity as a key feature.

In terms of appearance, the 2023 Leoncino 500 has a projector headlamp in the middle and a similar LED headlight. For the most recent model, the saddle has been changed to improve comfort for both the passenger and the rider. The ornate Lion of Pesaro on the front fender, along with the Leoncino 500's butch look, has been preserved. The rear single-sided tyre-hugger gets the scrambler look.

Now, coming to the hardware, the upgraded model gets 50mm USD front forks and an offset rear shock. The braking system features dual 320mm front discs and a single 260mm rear disc. The bike comes with 17-inch alloy wheels, which are shod with Pirelli 120/70 and 160/60 tyres at the front and the rear, respectively.

Although no definite dates have been announced by Benelli yet, the 2023 Leoncino 500 is expected to be launched in the Indian market very soon. 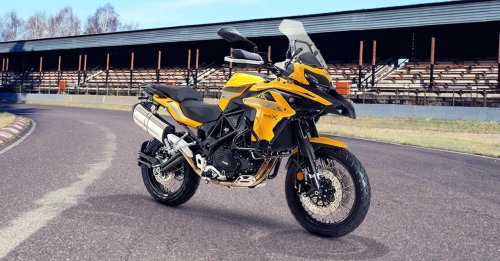