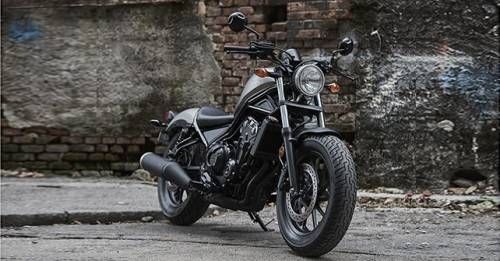 Honda has revealed the new Honda Rebel at the Long Beach International Motorcycle Show in California.

The Honda Rebel sits on a new tubular steel chassis, and features a fat-rear tyre and mid mounted footpegs to provide a comfortable riding position. The Rebel uses a 471cc, 8-valve parallel twin-cylinder, liquid cooled engine with a revised PGM-FI fuel injection system mapped to deliver a torque-heavy bottom-end output and also deliver the power in a smooth manner.

Honda will offer the Rebel in three colour options, - Graphite Black, Matte Armored Silver Metallic and millennium Red. The bike has been made its public debut in North America. But it is unlikely that the Rebel is headed to the Indian market any time soon.

Honda Motorcycle and Scooter India sell a large range of motorcycles which include the CD110 Dream, the Dream Yuga, Livo, CB Shine, CB ShineSP, CB Unicorn, Honda Unicorn 160, CB Hornet 160R, CBR 150R and the CBR 250R. Honda’s Scooter range which includes the Activa range and the in addition to the Dio and the Aviator are one of the most popular products in the Indian market, as well as the Honda NAVI. Honda also sells a range of super bikes in India which include the CBR 650F, CB1000R, CBR1000RR Fireblade, and the flagship Goldwing touring motorcycle.