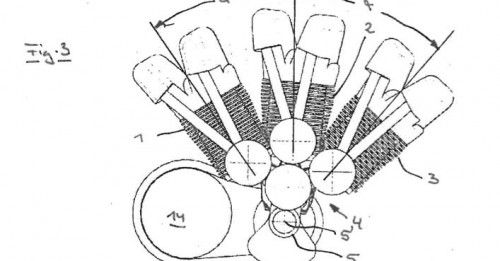 We heard of it somewhere today and we jumped on the internet, and if news is to be trusted, BMW is in the process of developing a W-3 engine.

Last night, while flipping through some random websites, I saw a post saying that BMW Motorrad is developing a W-3 engine. Along with it there was also a picture of a cruiser motorcycle with a W-3 engine (which later turned out to be one Feuling W3). It looked as if it was made to defy the norms. Doing the same thing today, I stumbled upon this piece at CycleWorld which says that it is happening for real (or at least, that’s what they feel).

BMW Motorrad is apparently seeking patents on two designs which are of two pushrod, W-3, air-cooled engines. You don’t need to be rocket scientist to agree that without making much alterations to the frame of a V-twin motorcycle, a W-3 engine can easily be fitted. The design looks pretty neat and the fresh wind should be able to keep the engine cool on most of the occasions. The engine will surely produce more power than a typical V-twin engine, but we are tripping imagining what the torque curve of it must look like.

Well, BMW is surely not the first bike manufacturer to think of such a design. Some manufacturers and also some individuals have tried their hands on making this kind of an engine, but nothing remarkable happened. In fact, the only thing, we think, made some news was the Feuling W3 that had a supposed power of 150bhp. But that’s the thing with BMW, they have the brains to think of a simple design and execute it to perfection. The designs are so close to perfection that they are nothing less than bulletproof. And if this philosophy follows in this case too, BMW Motorrad might be ready with a revolutionary product sometime soon in the future.