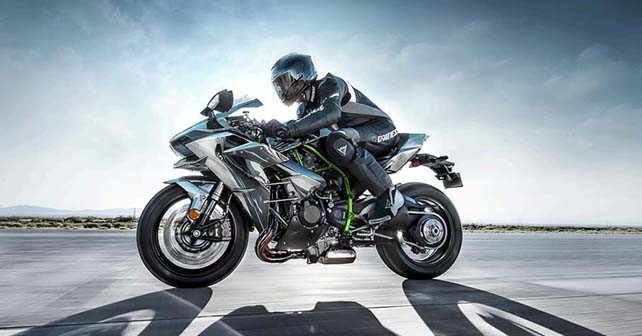 The road legal version of the supercharged H2R – Kawasaki Ninja H2 – can now be booked at the Kawasaki showrooms by paying Rs. 10 lakhs.

Kawasaki has revealed that it will be launching the road legal version of its supercharged H2R – Kawasaki Ninja H2 – sometime in the first quarter of 2015 in India. Unveiled at the Intermot in Germany almost three months ago, the 298bhp motorcycle from the Japanese manufacturer created quite a buzz. The road legal and a lesser powerful production version – the Ninja H2 – was launched at the EICMA in November. Soon, the rumours started pouring in from all the directions of the H2 coming to India, and recently Kawasaki confirmed it.

This tamed version of the monstrous H2R is, as claimed by Kawasaki, said to be the fastest production motorcycle ever in the world. In India, we expect it to come with a price tag of Rs. 32.8 lakhs approximately (on-road). Bookings have commenced too by paying a premium of Rs. 10 lakhs.

The deliveries are expected to begin by March 2015, but according to the sources, four motorcycles out of five allocated to India have already been booked.