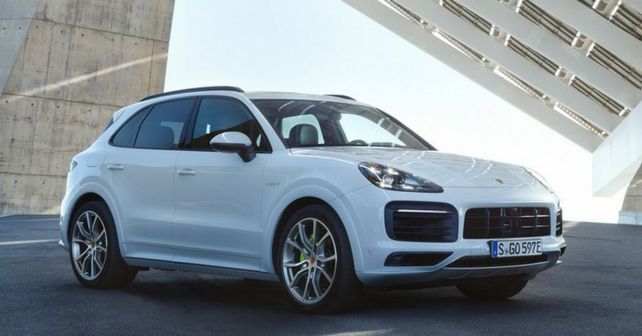 The new E-Hybrid might be launched in India alongside the entire third-gen Cayenne range.

The Porsche Cayenne E-Hybrid, which was globally revealed very recently, has been confirmed to launch in India in September this year. Pricing and market specifications for our market will be announced at a later date.

Powered by a 3.0-litre V6 engine, producing 335bhp of power, which is combined with a 135bhp electric motor, the E-Hybrid pumps a total power of 455bhp and an instantaneously available torque of 700Nm.

Battery capacity on the new model has improved significantly over its predecessor. The fluid-cooled battery, stored beneath the loading floor in the rear of the car, consists of eight cell modules with 13 prismatic lithium-ion cells each. Within 7.8 hours, the high-voltage battery is capable of being fully charged via a 230V connection with ten amps. With the optional 7.2kW on-board charger and a 230V connection, the E-Hybrid’s battery can be recharged within 2.3 hours.

It is worth noting the Porsche has not officially launched the third-generation Cayenne in India. Now, with the launch of the E-Hybrid confirmed in September, it is likely that Porsche will bring the entire third-gen Cayenne range here.

Also interesting is the fact that the diesel engine has been dropped from the new Cayenne, at least for the time being. Therefore, the new Cayenne will very likely be offered in petrol and its petrol-hybrid avatars in India.