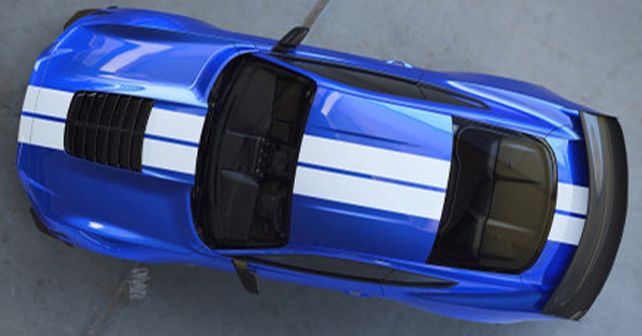 The 2019 Ford Mustang Shelby GT500 may be coming next year, but Ford has already started dropping its teasers. The first image of the new Shelby was revealed in March 2018, but that wasn’t much help since it was a darkened picture of the front fascia of the car. The second teaser – which’s been released now – shows a little more.

As you can see in the picture, it’s an overhead shot of the vehicle that reveal some of the design bits of the new car. Apart from the usual white stripes and a bright blue shade, you’d notice that it gets a long bonnet with a massive air scoop and huge carbon fibre rear wing. Also notice the pronounced power dome on the bonnet, which is quite apparent even from this top angle shot.

There’s some time left before Ford reveals the full specifications of the 2019 Shelby GT 500, but the firm has confirmed that it’ll feature a supercharged V8 that will develop over 700 horsepower. And that’d mean that it’ll be the most powerful street-legal production Ford ever!

The new Shelby Mustang GT500 is not just going to be a horsepower fest though. Ford is insisting that it’ll come with a lot track technologies and hardware, which means going fast around corners shouldn’t be a problem.

The 2019 Ford Mustang Shelby GT500 is expected to go on sale next year and it’ll be one of the 12 new models under Ford Performance, which will be launched by 2020.