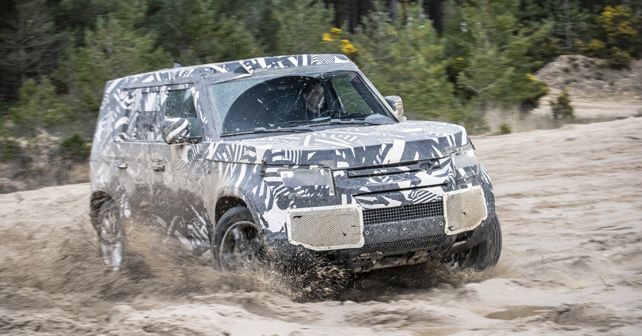 Leaked details have revealed that the all-new Land Rover Defender will be produced in three different body styles, with the mid-size version set to make its debut in October 2019.

In an unexpected disclosure, a Land Rover (LR) enthusiasts forum has managed to release some photographs, which seem to be from an internal meeting at Land Rover. However, what's interesting is that the images have nearly revealed the entire blueprint of the upcoming Defender's specification & powertrain details.

Firstly, the new Defender will be arriving in three body styles, which have been codenamed as 90, 110 & 130. Defender 90 will be a short wheelbase (SWB) version offering 5/6 seater configurations, whereas the 110 can be termed as the standard or mid-size version, which will also include a 7-seater option. Lastly, the unexpected surprise comes in the form of the Defender 130, which will be a long wheelbase (LWB) version but, with an 8-seat configuration. 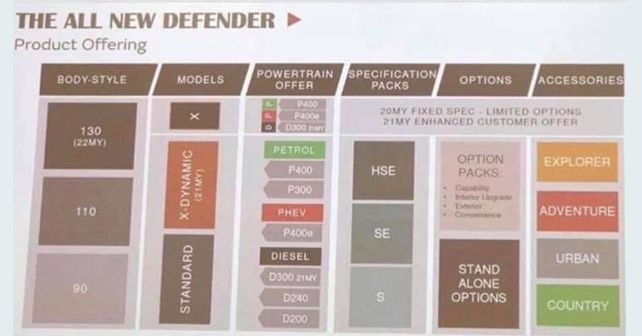 In terms of the reveal, Land Rover will showcase the Defender 110 first, which will make its global debut in October 2019, followed by the SWB Defender 90 in March 2020. The 130, however, will only be seen in the flesh sometime in August 2020. While the Defender 90 & 110 have been marked as MY20 models, the 130 has been demarcated as an MY22 model, which could hint at its commercial debut timeline.

In terms of engine choices, the Defender will offer up to 6 different options, of which three are diesel (D200, D240 & D300), two petrol (P300, P400) and one plug-in hybrid (P400e). While these six engine options will be available in both Standard & X-Dynamic (MY21) variants, the top-spec X variant will only be available with the P400, P400e & the D300 powertrains. The Standard & X-Dynamic variants will further be available with S, SE & HSE specification packs.

However, we are still far from the point where we can determine confirmed details of an India-spec model and how many combinations & permutations will actually make it to our shores.