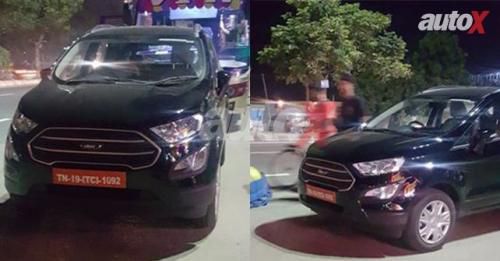 The Ford EcoSport has been spotted testing with upcoming updates on Indian roads sans camouflage.

One of our eagle-eyed readers, Sidharth Ajay, has sent us images of the new Ford EcoSport. The images reveal the facelift updates on the compact SUV, which Ford India is expected to launch in the third quarter of this year.

The car was spotted testing in Kochi, Karnataka with temporary registration plates of Tamil Nadu. The test mule had no camouflage and features a brand new front bumper, re-profiled headlamps and new fog lamps. The major change, however, is the new radiator grille which is styled to give a more aggressive look to the car. These updates are the same which were revealed when Ford revealed the EcoSport globally with the facelift.

The rear of the car was not visible in the images that we received, but, only minor changes will be made to the final styling. While European markets have the spare wheel mounted underneath the car, the Indian market will continue to get a tailgate mounted spare wheel, but with a redesigned plastic cover. The interior of the car is also expected to receive some changes and will feature a new touch screen infotainment system with Ford SYNC 3 equipped with Android Auto, Apple CarPlay, SYNC Connect with FordPass app. The interior design of the EcoSport varies from market to market, and it is still unconfirmed what layout will be offered in India. Globally, the EcoSport is also offered with an optional Bang and Olufsen sound system in some markets, but that is unlikely to be included in the package for the Indian market.

The current EcoSport features 1.5-litre petrol and diesel engines along with a 1.0 EcoBoost petrol engine. The new EcoSport is expected to feature a new set of engines, although, at the moment, there is no confirmation from the manufacturer as yet.

While Ford had an upper hand when they first launched the EcoSport in India, the competition in the market currently is fierce. Maruti’s Vitara Brezza is now the most popular choice amongst buyers in the segment. How the Indian market will respond to the new updates on the EcoSport remains to be seen. Ford is expected to launch the new EcoSport around the festive season.