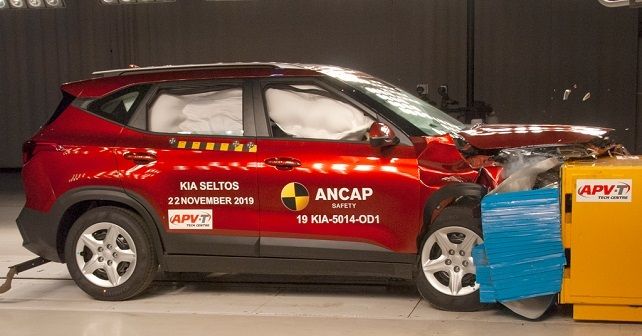 Ever since its debut, the Kia Seltos has turned out to be an absolute winner for the Korean brand. The Seltos also marked Kia’s entry into our market and has since been a huge sales success – over 40,000 units have been sold since its launch in August 2019! Not to mention, it’s also the best-selling SUV in the country right now. And, now, there’s more good news (for Kia), as the Seltos has been awarded a 5-star safety rating by Australasian New Car Assessment Program (ANCAP).

The Seltos sold in Australia was recently crash-tested by ANCAP, and suffice it to say, it came through the test with flying colours. The Seltos scored 85 per cent in adult occupancy, 83 per cent in child occupancy, 61 per cent in Vulnerable Road User Protection, and 70 per cent in safety assist features. Now, of course, there’s a catch here. The Seltos that's sold in the Australian market is made in South Korea and comes with more safety equipment than the car that we get here in India. The Australia-spec Seltos comes with six airbags, ABS, autonomous emergency braking, lane keep assist, lane departure warning, emergency lane keeping, and a tyre pressure monitoring system (TPMS). The Seltos sold in India, however, comes fitted with dual-airbags, ABS with EBD, and rear parking sensors as standard, whereas the top-end trims also get six-airbags, traction control, hill-start assist, a 360-degree camera, TPMS, and a blind spot monitoring system. Sure, it doesn't have all the bells and whistles like the Australia-spec version, but since the passenger compartment of the Australia-spec version remained stable during the crash test, the same should be the case for the Seltos built in India.

The Kia Seltos sold in Australia is offered in two petrol engine options – both of which differ from the India-spec model. While we get 1.4-litre turbo and 1.5-litre naturally aspirated petrol motors, the Australian version gets 2.0-litre and 1.6-litre turbo petrol engines.