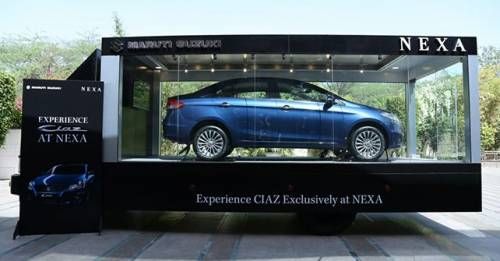 Maruti Suzuki has announced that the Ciaz sedan will be retailed from their Nexa dealer network from April 1, 2017.

Maruti Suzuki had launched the Ciaz in India back in 2014. And in 2015, the company introduced their premium dealership network under the name of Nexa prior to the launch of the S-Cross. Initially the Ciaz was also planned to be sold from the Nexa retail channel, however due to the delay in the introduction of Nexa, Maruti had then decided to sell the Ciaz from their existing dealer network.

Maruti Suzuki has now announced, that as of April 1, the Ciaz will be sold through the Nexa channel – as it was originally intended to be. However, at the moment, there is no confirmation if the facelift model of the sedan will also be launched, though it does seem likely that the car may get some updates. Images released by Maruti does indicate that the car is likely to get a brand new blue exterior colour.

For the Indian market, the Ciaz is powered by a 1.4-litre, 4-cylinder petrol engine which churns out 91bhp and 130Nm of torque and comes mated to a 5-speed manual gearbox or a 4-speed automatic. The Ciaz diesel has a 1.3-litre, 4-cylinder turbo diesel engine which comes with a Smart Hybrid Vehicle System as standard which helps in delivering better fuel economy. The diesel engine generates 88bhp and 200Nm of torque and is only offered with a 5-speed manual gearbox. With the Ciaz joining the Nexa fleet, variant names  for the Ciaz will also change to Sigma for the base trim, Delta for the second to base trim, Zeta for the mid range variant and Alpha for the top spec car.

Maruti retails the S-Corss, Baleno, and the Ignis through the 250 strong Nexa dealer channel and now the Ciaz will be the fourth product in the Nexa family.