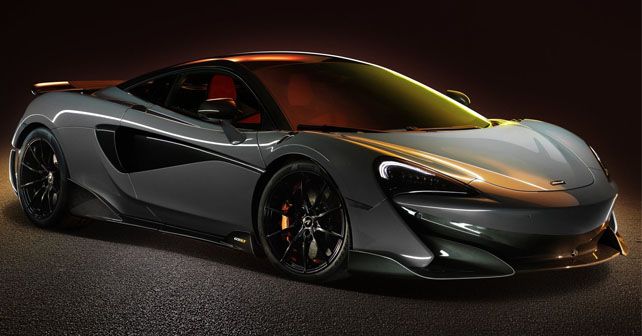 Most powerful and most track-focused McLaren Sports Series car has arrived . . .

Meet the McLaren 600LT – the fastest and most powerful car of the firm’s entry-level Sports Series. As McLaren will tell you, the 600LT is the fourth ‘Longtail’ version from the brand after the 675LT Coupe, 675LT Spider and the mighty F1 GTR LT. The only difference is that at £185,500 (₹1.66 crore approx.), it’s priced relatively lower than its other siblings.

The base for the 600LT is the 570S, of course. But what you get here – after spending a premium of around £36,500 (₹32 lakh) – is 23 per cent new or redeveloped parts. It starts with the bespoke carbon fibre bodywork, which means it gets a unique composite material roof, front splitter, side skirting and an extended rear diffuser. And don’t miss the top-mounted exhausts that now come with a fixed rear wing to improve downforce. Inside, the 600LT comes with carbon fibre racing seats from the P1. Thanks to all carbon fibre bits, the car is now 96kg lighter than the standard 570S.

Coupled with this lighter body is the same 3.8-litre twin-turbocharged V8 that works in the 570S. But, to make matters slightly more exciting, the power and torque figures are up – it now develops 592bhp (600PS) and 620Nm of torque. Power is sent strictly to the rear wheels via a seven-speed dual-clutch transmission.

There are some chassis modifications as well. The 600LT gets forged aluminium double-wishbone suspension, carbon ceramic brakes, stiffer engine mounts and Pirelli Trofeo R tyres to make it a more potent track tool than the standard car.

McLaren hasn’t revealed how many units of the 600LT will be produced, but the company has made it clear that it’s a limited-production model. Given the fact the McLaren only produced 1,000 units of the 675LT (500 Coupe & 500 Spider), expect the 600LT’s production numbers to be in the same ballpark.