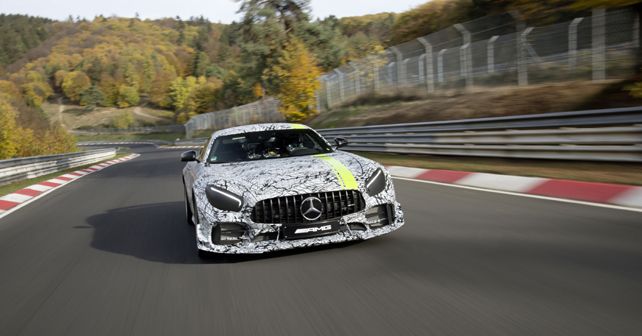 The meaner and more aggressive Mercedes-AMG GT R PRO will be the highlight of the upgraded AMG GT range at this year's LA Auto Show.

Mercedes-AMG will be bringing a host of updated models to this year's LA Auto Show. However, expect the AMG GT R PRO to be the star of the show. As the name suggests, the GT R PRO will be a hardcore version of the already manic AMG GT R. It will headline the range-wide update of the AMG GT models.

While the GT R PRO has already been spotted lapping the Nurburgring, it is only now that the German marque has officially confirmed the car's LA Auto Show debut. Despite the announcement, details and specifications of the GT R PRO still remain a guarded secret. We'll have to wait for the debut in order to bring you the exact details.

Don't expect the GT R PRO to be a completely new car. Using the Mercedes-AMG GT R as a base, AMG seems to have taken its learnings from the GT3 and GT4 race cars to provide the GT R PRO with an aero package to increase downforce. By convention, any performance-oriented car undergoes some serious weight-shedding in order to become a record-breaker and that is exactly what we are expecting from the GT R PRO as well. Use of more carbon fibre on the body panels is likely to give the GT R PRO some significant weight reduction.

However, talking about the obvious changes, the prototype in the picture can be seen sporting a new front bumper, featuring a much larger splitter with supporting uprights and outer intakes. The extra downforce on the front will likely be balanced out by a larger rear wing. The standard AMG GT R’s four-litre twin-turbo V8 motor produces around 577bhp. So, the AMG GT R PRO is expected to have a higher power output, somewhere near the 600bhp mark.