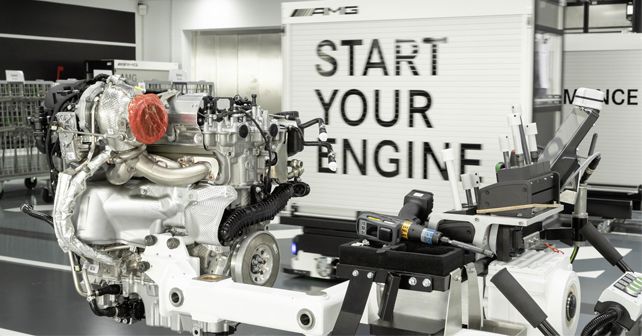 With a power output of 416bhp, along with a peak torque of 500Nm, Mercedes-AMG's new M139 2.0-litre turbo four-cylinder engine is the world's most powerful four-pot production motor.

Mercedes-AMG’s 2.0-litre turbo four-cylinder engine has been given a shot in the arm. Now the existing engine is no slouch by any means, but as you’d expect from the folks at Affalterbach, they have taken its performance to a cracking new level. So much so that it’s now the world’s most powerful four-cylinder engine in production!

Dubbed the M139, the new engine is made completely from the ground up, claims Mercedes. The M139 will replace the already bonkers M133, which powers the current AMG pocket rockets like the CLA 45, A 45 & GLA 45. The M139, however, is brutally more powerful. It develops a whopping 416bhp – up by 40bhp – and 500Nm of torque, which is a bump of 25Nm. This also means that it develops a staggering output of 208bhp/litre!

Mercedes will offer the new engine in two output versions though. The other one is relatively less powerful with a power output of 382bhp and 480Nm. This will be offered in the ‘basic version’ of the A 45 and other small Mercedes AMGs, while the 416bhp spec will be reserved for the ‘S’ derivatives.

‘Apart from its performance figures, the new engine will impress with its immediate response’ – claims Mercedes-AMG, of course. However, they’re backing these claims with the help of a few facts. They say that in the M139, the peak torque is available in between 5,000-5,250rpm (4,750-5,000rpm in the basic version). Mercedes says that this gives it a power delivery that’s quite similar to a naturally aspirated (NA) motor. Further, they say that the engine can rev up to 7,200rpm, which is quite similar to a free-revving NA engine as well.

Compared to the M133, the M139 has been heavily re-engineered. This includes rotating the engine around its vertical axis by 180 degrees - the turbocharger and the exhaust manifold have moved to the rear, while the intake system is now positioned at the front. The new engine also has larger exhaust valves and a beefed-up cooling system. The new AMG four-cylinder powertrain also has two-stage fuel induction, which is a first for this engine.