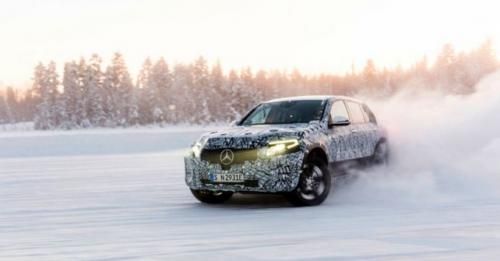 The first model of the new EQ sub-brand is going to be a mid-size crossover.

Mercedes has officially teased the upcoming EQC, a crossover that will mark the debut of the German company’s new green strategy under EQ sub-brand.

The new official images show EQC’s heavily camouflaged prototypes being tested in extreme environment, down to temperatures of around -35 °C. To do this, Mercedes-Benz has set up a test centre in the small northern Swedish town of Arjeplog in Lapland.

In addition to the road testing in the far north, tests take place there on specially set-up testing tracks. Demanding hill climbs with gradients of up to 20 per cent, testing tracks with varying coefficients of friction, handling courses and skid pads on the almost frozen lake pose the stiffest of challenges for the powertrain and control systems.

While all Mercs are claimed to be subjected to over 500 individual tests before being put into production, the company’s technicians had to subject the EQC to further checks, verifying its operation in the most extreme conditions – since the EQC is Merc’s first EV. The cold starts, the performance of electric motors at polar temperatures, different types of recharging methods, measuring the timing and performance of various systems, etc. have all been taken care of.

According to Mercedes, the EQC will have its market launch in 2019, which will be followed by more models in the EQ range with different body styles. The car will be showcased in its full glory at the upcoming Geneva Motor Show.

In addition to the EQC, Mercedes-Benz will also showcase the production version of the GLC F-Cell, the world's first electric vehicle to combine a fuel-cell and a plug-in battery in powertrain technology.