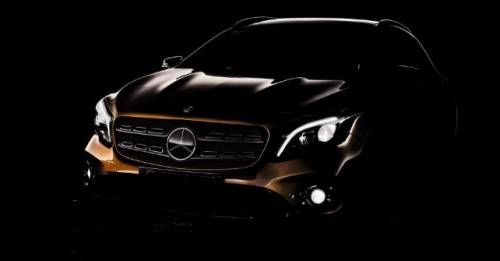 Since the introduction of the GLA in 2015, Mercedes-Benz hasn’t given it an update. The Stuttgart-based car maker has now released a teaser image of a facelifted GLA that is set to make its debut at the Detroit Motor Show. The image that has been released shows the front-end with a revised grille featuring black slats. The headlights seem to be slimmer and the bumper too has been remoulded. The GLA facelift gives the boot to the large grills on the edge of the bumpers and in place gets circular fog lamps.

Changes at the back and on the inside, are not yet known as no images have been released as yet. That being said, spy shots making their rounds on the internet have revealed the GLA facelift to sit higher than the current model. The raised ground clearance gives it a slightly more rugged stance, something that SUV buyers will appreciate. In terms of features, the GLA is expected to come fitted with a touchscreen infotainment system with Apple CarPlay and Android Auto.

At the heart of the GLA will be the same engine options that are on sale currently – a 2.2-litre diesel and a 2.0-litre petrol motor. The GLA is also available in the 45 AMG trim, with a 2.0-litre turbocharged petrol motor churning 355bhp and 450Nm.

The Mercedes-Benz GLA facelift will be revealed the on January 9. Expect it to land in our shores within the next few months. The GLA currently carries a starting price of Rs 32.84 lakh – the facelifted version is likely to demand a premium over the current model.