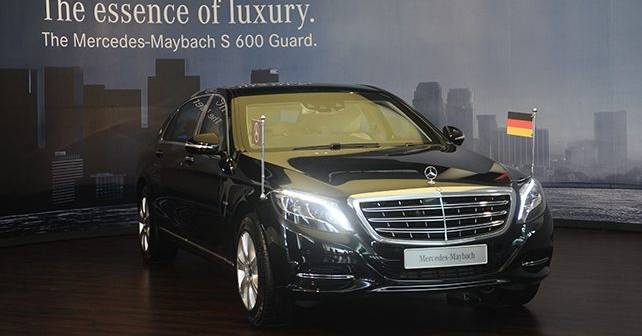 Mercedes has launched the Maybach S600 Guard armored limousine in India for a price of Rs. 10.5 crore (ex-showroom Delhi)

VR10, the highest ballistics certification ever on a production vehicle. The only car available to a civilian in the world with such a certification is the Mercedes-Maybach S600 Guard. Mercedes has decided, some Indians also need such level of protection, therefore put the car on sale here in our market. Just after 15 days of its global introduction, the car has arrived on Indian shores. with the Rs. 10.5 crore price tag, the armoured Maybach is the most expensive vehicle in Mercedes-Benz India's portfolio. 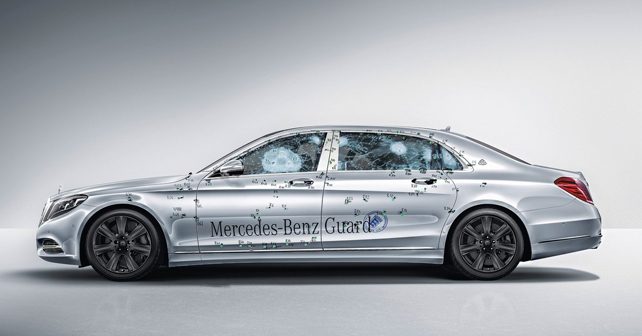 The S600 Guard is already on sale in India, but its VR9 ballistics level just wasn’t enough. VR10 is the way to go we guess. And leg room, Indians can never have too much rear leg room. Hence the inevitable arrival of the Maybach with the VR10 stamp. 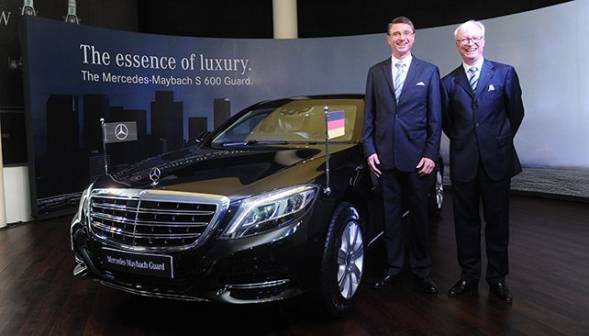 Roland Folger, Managing Director and CEO, Mercedes Benz India commented, “Mercedes-Benz’s remains the most trusted brand globally in manufacturing ‘Guard’ vehicles since 1928. It is hence not surprising that most of the global heads of states, top diplomats, business tycoons and celebrities prefer a ‘Guard’ vehicle. We are pleased to introduce the world’s first passenger vehicle certified with the highest ballistic protection level of VR10, in India. The Mercedes-Maybach S 600 Guard is launched in India within 15 days of its international debut. With the introduction of the Mercedes-Maybach Guard, we continue to follow our ‘top of pyramid’ approach for the discerning Indian customers.”

Included in the price tag is a 6.0-litre, twin-turbo V12 petrol engine that generates 530hp and 830Nm of torque. The engine is mated to Mercedes’ 7G-Tronic automatic transmission and 4Matic all wheel drive system. despite weighing in at 4.7 tonnes, the supersede limo can do 0-1007.9 seconds. To keep the car moving under attack, you also get reinforced run flat tyres that can run for 30km at 0psi at 30km/h if shot and punctured. In addition to the most luxurious interiors identical to a standard Mercedes-Maybach S600, so you can smile at the gunmen failing to pierce through the armor with their assault rifles while you sip drink you drink.

Because of the massive addition of weight, the suspension of the car has also been beefed up to come with the enormous size and weight of the car. The windows are coated with polycarbonate on the inside for splinter protection for the passengers. Underneath the car, you can also add a fire extinguisher as an optional extra. While fro the outside, the car looks exactly like a standard S600, the idea is intentional not to give away the fat the car is reinforced with bullet proof armor which they call their “Protection Concept”.

Obviously, the car will not be manufactured in India. The car is built at a secret facility in Germany and will be brought to India as a Completely Built-up Unit.