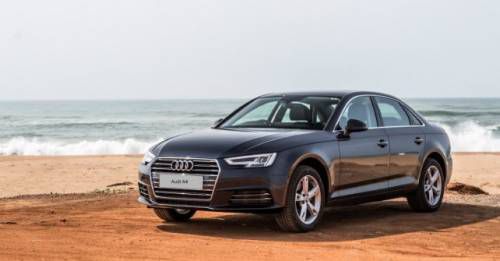 Audi brought the all-new A4 to India last year, but it was only introduced with a petrol powerplant. The Ingolstadt-based car maker has now launched the new A4 with a diesel heart at Rs 40.20 lakh (ex-showroom Delhi). The A4 diesel will lock horns with the Mercedes-Benz C-Class, BMW 3 Series and the Volvo S60.

The A4 diesel looks identical to its petrol sibling, except of course the 35 TDI badge on the boot. But as you’d expect from a car in this class, the new A4 diesel comes heavily loaded with tech including a 21cm high-resolution MMI monitor, smartphone interface with Apple CarPlay and Android Auto, a 10-speaker audio system, Audi parking Aid Plus with a rear-view camera, 8 airbags, ABS with EBD and more.

The biggest change is at the heart of course – a 2.0-litre four-cylinder unit that is good for 188bhp and 400Nm. This engine comes mated with a 7-speed S tronic transmission. With these figures, Audi claims that the A4 diesel can do the 0-100km/h dash in just 7.7 seconds and record a top speed of 237km/h. The German car maker also says this new A4 diesel consumes 7 per cent less than its predecessor with an ARAI certified efficiency of 18.25km/l.

Rahil Ansari, Head, Audi India said, “It is never an easy task to design a successor to a bestselling model, but that is precisely what makes the whole process so very exciting. With the all-new Audi A4 35 TDI, we are yet again setting the bar a notch higher. The all-new Audi A4 35 TDI is a groundbreaking synthesis of technology and aesthetics. The technology available on the earlier Audi A4 has been redeveloped so that it yet again defines the benchmark in the segment.”

Audi had introduced the A4 with a petrol engine last year. We drove it prior to its launch and found it could do with more punch, something that this diesel iteration surely does. While we try and get our hands on the new A4 35 TDI diesel, read our review of the A4 petrol.