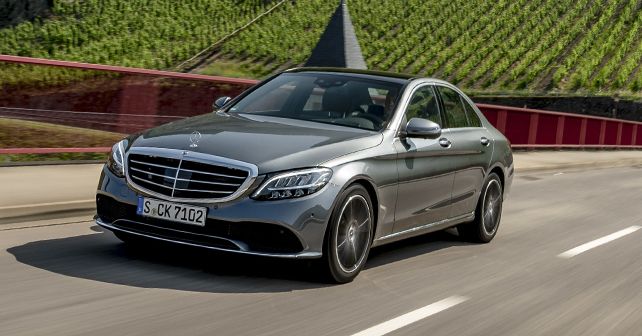 The Mercedes-Benz C-Class facelift will arrive in India with a mild hybrid new petrol engine.

Mercedes-Benz India has confirmed that the new facelifted C-Class will be launched in India on September 20. The C-Class will come with a new C 200 petrol model with a mild hybrid, and the C 250d will be replaced by a more powerful C 300d.

Being their most popular product world over, more than 4,15,000 units of the C-Class has been sold worldwide in 2017 alone. For the 2019 model year, Mercedes have given the current generation of the C-Class, which is in its fifth year of production, a mid-cycle update with over 6,500 new components.

The term ‘facelift’ can be used loosely for the C-Class, for the changes are not just cosmetic. For starters, the C 200 petrol engine is a new 1.5-litre 4-pot turbo-charged motor that will come paired with a 48-volt micro-hybrid system called ‘EQ Boost’. The engine itself develops 181bhp, and the mild hybrid adds an additional 13bhp. Here is our first drive experience of the C 200 from earlier this year. As for the diesel, the same motor from the existing C 250d will be available with more power and will be henceforth called the C 300d. Transmission duties will be carried out by the 9G-Tronic 9-speed torque converter automatic, which has also been further refined.

For the first time Mercedes-Benz has introduced air-suspension on the C-Class, however, we will have to wait and see whether it will be offered in India as an option. Having said that, the C-Class does get a new suspension set up with active dampers as well. Additionally, the entire electronic architecture is brand new with a majority of it being borrowed from the flagship S-Class. While there is still no touch screen available, the interior has been updated with a new 12.3-inch all-digital instrument cluster, and it continues to come with the COMMAND infotainment system with a 10-inch screen. Both can be controlled by the new steering wheel with touch-sensitive buttons, which have also been borrowed from the latest S-Class.

Mercedes is expected to price the new C-Class competitively, however, the price of the petrol model could come at a slight premium due to the addition of the hybrid system. The C-Class would compete against the BMW 3-Series, the Audi A4 and the Jaguar XE.