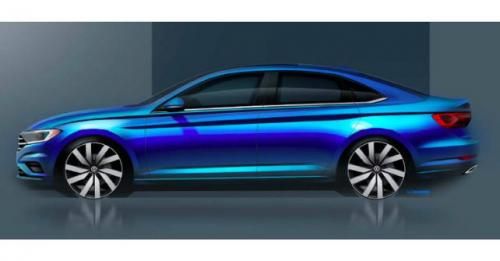 Volkswagen has released a few more teaser sketches of the new-generation Jetta, this time around, giving us more details of its design and interior

Just a few weeks back, Volkswagen Canada released a teaser image of the 2019 Jetta on their official website. The image released then was a silhouette of the car and didn’t give out too many details. With the official debut of the new Jetta just weeks away, Volkswagen has released a few more teaser sketches – this time around giving us more visual information about the car.

Volkswagen has released a sketch of the side profile of the car and from this angle, the new Jetta’s design looks inspired from the Arteon. In profile, the new Jetta has two sharp lines to make it look dramatic – one commencing from the headlight and blending into the glass house and the other starting from the front wheel arch leading into the taillight. A character line at the bottom adds to the dramatic visual charm. And then there is the swooping roofline that blends smoothly into the tail section. Revising on the details that we already knew from the previous spy shots – the front is now wider and sports a larger grille. This new 2019 Jetta also gets an aggressive chin.

Sketches of the interior have also been leaked and it reveals quite a few details of the car. The dashboard has been completely redesigned and now has the central infotainment screen integrated into it. Volkswagen also seems to have fitted their digital cockpit in the new Jetta. Thankfully, the air con controls are the traditional knob ones and not a touchscreen unit like a lot of new cars. The steering wheel is identical to the current generation of Volkswagen cars. 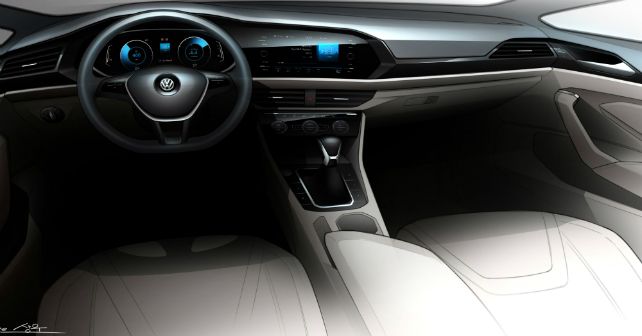 The 2019 Jetta, like the Tiguan, will be based on Volkswagen’s MQB platform so it is safe to assume that it will have more space and be lighter than its predecessor. Globally, the new-gen Jetta is expected to come with three engine options – a 1.5-litre turbo petrol, a 2.0-litre turbo petrol and the trusted 2.0-litre diesel.

Volkswagen brought the sixth-gen Jetta in India in 2011 and gave it an update in 2015. This Jetta has recently been discontinued in India. Volkswagen is all set to unveil the 2019 Jetta at the North American International Auto Show next month. There are a lot of questions about the German carmaker bringing in a right-hand drive version of the Jetta to India, the answers to which we may possibly find out at the time of unveiling.