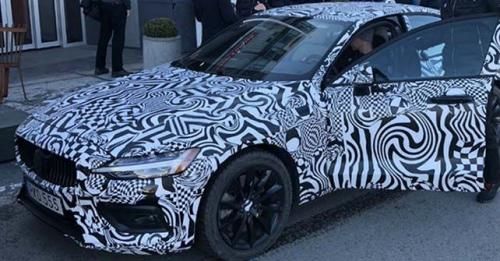 Volvo CEO has teased the upcoming S60 sedan on Twitter.

As the next-generation 60 series from Volvo debuts at Geneva in March 2018 – with the V60 wagon – the boss of Volvo Cars thought it would be a good idea to tweet a picture of the S60 in its final stages of its development.

Volvo CEO Hakan Samuelsson posted a tweet saying, ‘Winter testing of new #VolvoS60 in Lofoten Norway. Passionate product owner Magnus Olsson very satisfied with results. The car will be built in the new factory in South Carolina later this year.’ This was accompanied by an image of the S60 sedan draped in camouflage.

The S60 sedan is said to be revealed by Volvo later this year, following which it will make its way to the Indian market. Volvo has also confirmed that the S60 will be produced at their brand-new facility in South Carolina in the US. The image tweeted by Samuelsson shows the 2019 Volvo S60, while it was undergoing testing in Norway. The S60 and the V60 estate will co-share their underpinnings as they both are based on Volvo’s Scalable Product Architecture (SPA). The SPA platform is also the basis on which the brand’s 90 series has been developed on.

The tweeted image shows that the car will have a significant amount of similarities in terms of design with the V60, including the Thor’s Hammer styled LED DRLS headlamps (a Volvo design signature). However, the rear of the car is where the similarities will end. Though it is not visible in the tweeted image, it’s possible that the S60 would get a similar styling treatment for the rear with C-shaped tail lamps inspired by the larger S90.

The 2019 Volvo S60 is expected to make its debut and is confirmed to go into production later this year. While it will be available in Europe and the US markets this year itself, it’s likely that the all-new S60 will make its way to India in early 2019.