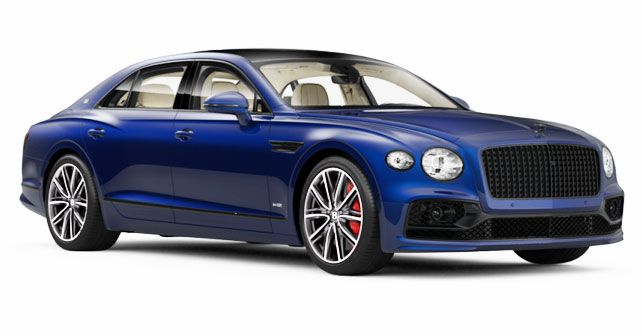 Here comes another OEM-offered online configurator that allows you to customise your dream car or motorcycle. After hearing about the recent Bentley Mulliner Bacalar customisation options, I went to the Bentley website to see what I could find to play with. The Bacalar is a super exclusive model limited to just 12 units, and it wasn’t available for customisation. So, I decided to work on another reasonably sporty Bentley – the new Flying Spur.

2019 was a big year for Bentley, as it marked the 100th anniversary of the iconic uber-luxury British car marque. The Flying Spur has been Bentley’s entry-level uber-luxury car for a while now. And this new one also sits below the Mulsanne. But Bentley insists that this car feels as exciting from the driver’s seat as it does from the rear seats. And that’s why I decided to pick this Blackline specification of the new Flying Spur. The idea was to modify it to suit a sportier taste. I know, that sounds a little ironic, but there’s a very good reason – Bentley offers it as a factory customisation option, and, after all, it does have a 626bhp & 900Nm 6.0-litre W12 engine, which gives this luxury limousine a 0 – 100km/h time of 3.8 seconds and an eye-watering top speed of 333km/h. Now, that’s more like a supercar, isn’t it?

So, let’s see how we can transform this latest version of the Bentley Flying Spur to have a sportier exterior.

First up, in the configurator, you have to choose between the First Edition and standard version of the car. I decided to go for the more special First Edition model – an obvious choice, I think. Next, I chose the Moroccan Blue paint shade for the car, as it appears elegant and blends in perfectly with the sporty trim of the Blackline specification, which does away with all the chrome on the exterior and replaces it with black plastic trim, such as on the front grille, front air dam, gills of the front aprons, and rear exhaust tips. To complement the blacked-out exterior trim, I added 21-inch, 10-spoke, dark grey, and bright-machined alloy rims complemented by red brake callipers, which are listed as ‘Standard’ on the options list. I wonder what other optional higher-spec brakes are offered by Bentley! 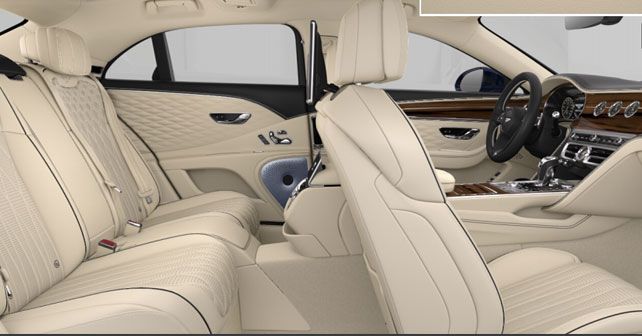 Anyway, from here on, the rest of the customisation options for the car are purely for the interior. First, I picked the Liquid Amber wood trim for the dash and door pads, as I prefer dark wood. Keeping the rest simple, I opted for the beige leather upholstery, which is made from hides selected individually from herds raised in northern Europe, where the cooler weather causes fewer insect-related blemishes on them. The seats have been specified with contrast stitching to lend a bit of flair to the diamond quilted beige leather. I went for the blind emblem stitching, as it carries the Bentley emblem in a more subtle and stately manner. I also specified beige colour carpets with contrast borders and lamb’s wool floor mats, for they lend the interior an air of plushness.

I also added an-all-black steering wheel but steered clear of the all-black interior to keep it in agreement with the Bentley scheme of things and not go all the way with the Blackline spec. While there is no doubt that it feels and looks sporty, I think that all of the luxurious elements of this car stand out with the beige upholstery.

Going for some optional extras

This is a Bentley after all, so it would be a cardinal sin to not add any exorbitantly priced optional extras to the car. So, I decided to go for the choicest options. First, a Bang & Olufsen sound system, which can transform your commutes into an exciting experience. Next, I added some comfort-related features, such as a parking heater, a refrigerator that’s tucked away between the rear seats, Bentley’s rear-seat entertainment package consisting of rear-seat screens, inductive phone charging, and a heated windshield. In terms of some helpful functional features, I opted for a battery charger and valet key. And I can’t believe that I had to pick a first aid kit and warning triangle as optional extras for a car of this stature. Or maybe something was off in the customisation tool at this stage. Anyway, the last option I picked was for peace of mind – a 24 month extended warranty package, which is going to keep those premium maintenance bills at bay for a while.

Right, so I specced a Bentley to my taste, but there was a problem – the standard Flying Spur retails at a whopping Rs 3.41 crore in India, and that’s before registration, insurance, and taxes. So, imagine what this fully-specced First Edition Blackline is going to cost!

How would you specify your Bentley Flying Spur? Leave your suggestions in comments!