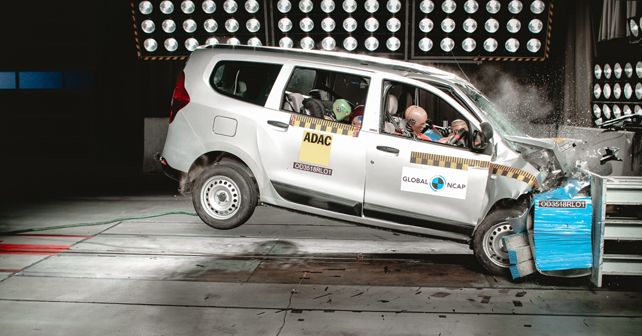 After it failed to take-off in terms of sales, the Renault Lodgy has hit another low by securing a disappointing zero-star rating in the Global NCAP crash test.

The Renault Lodgy, primarily due to the absence of airbags in its standard version, achieved zero stars for adult occupant protection and two stars for child occupant protection. The zero-star rating can be partly attributed to the lack of airbags which caused the head and chest of the test dummy to come into contact with the steering wheel. The crash also revealed an unstable structure during the crash with deformations going as far back as the rear door and a rupture in the footwell area as well. The lack of ISOFIX anchorages meant that the child seats needed to be installed with adult seatbelts which, unfortunately, could not prevent excessive forward excursion of the dummy representing a 3-year old child, which impacted its head on the backrest of the driver's seat.

David Ward, Secretary General of the Global NCAP said, 'In contrast to the Vitara Brezza, the zero-star Renault Lodgy is extremely disappointing. Global NCAP had hoped that Renault had learned from the difficult experience they had with the Kwid. It’s time now for Renault to make front airbags standard across their entire Indian product range.'

'It is surprising and a matter of great concern that global car makers are still producing cars that offer substandard quality and zero safety in India. In contrast, such models would be considered illegal in their own countries,' said Alejandro Furas, Technical Director of GNCAP, while announcing the crash results.