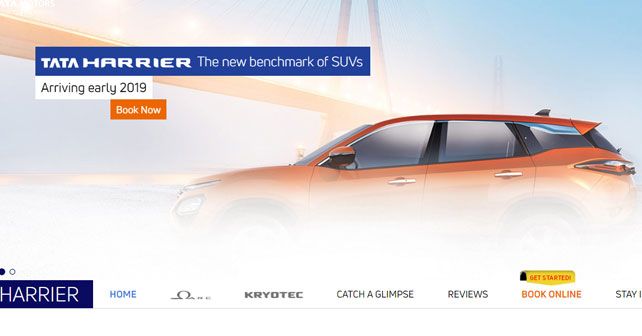 Tata opens bookings for its upcoming five-seater flagship SUV, the Harrier, at Rs. 30,000.

Tata has officially announced that the company has opened bookings for its upcoming flagship SUV, the Harrier at Rs. 30,000. Rumour has it, that the homegrown car maker is looking to potentially price the Harrier in the range of Rs. 16 lakh to Rs. 19 lakh, ex-showroom. This would mean that the prices for the base variants of the Harrier will overlap with the top-end variants of the Hexa.

The Harrier though will make a radical departure from Tata’s traditional model line-up as it is built on Tata’s new OMEGARC (Optimal Modular Efficient Global Advanced Architecture) monocoque platform. This platform is derived from Land Rover’s L8 platform which also underpins the current Land Rover Discovery Sport. Its worth noting that this very platform has spawned over 1 million SUVs worldwide and has been tested extensively for its strength and durability. The Tata Harrier for instance has been tested on four poster simulators to replicate driving on torturous terrain for 10 years by covering the equivalent of 2.2 million kilometres on the test bed. With that aspect covered, Tata has focussed on making the Harrier its most plush model ever by giving the new SUV auxiliary isolation panels which are designed to dramatically reduce NVH levels.

Last week Tata also revealed that that new Harrier will be powered by an equally new Kryotec 2.0 litre, four cylinder, turbocharged diesel engine that has been developed exclusively for the vehicle. You can read more about the new engine here - Tata develops new 2.0 litre turbo diesel mill for Harrier

“Since its showcase as a concept at the Auto Expo 2018, the Harrier has made huge waves amongst the SUV lovers. With the rising excitement and consistent demand from our discerning customers to book the Harrier at the earliest and be amongst the early ones to receive deliveries, we have taken a conscious decision to open bookings in the festive season. With Turnaround 2.0, we have already begun our journey towards winning sustainably in the passenger vehicle business and we are confident that with the introduction of this new class leading SUV, we will only soar higher,” said, Mayank Pareek, President, Passenger Vehicle Business Unit, Tata Motors.