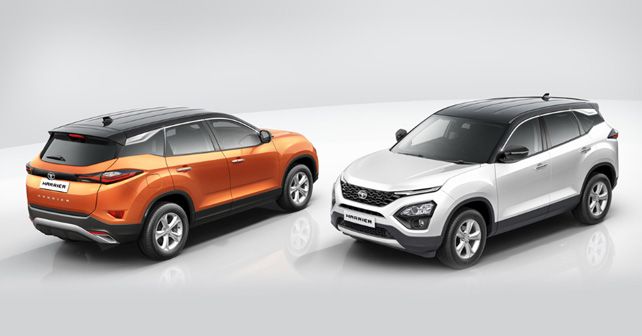 The Tata Harrier Dual Tone is based on the top-spec XZ variant of the SUV and commands a premium of around Rs 20,000.

Tata Motors has launched the Harrier Dual Tone version in the country at Rs 16.76 lakh (ex-showroom, Delhi). As the name suggests, the new version comes with a dual tone paint scheme and is based on the top-spec XZ variant of the SUV. The dual-tone Harrier features a black roof, available in two of the existing colour options, namely – Calisto Copper and Orcus White. The Harrier dual-tone version commands a premium of around Rs 20,000 over the regular XZ variant.

Apart from the dual-tone paint scheme, there’s nothing new on the mechanical front. This means the Harrier continues to be powered by a Fiat-sourced 2.0-litre turbo diesel engine that churns out 138bhp and 250Nm of torque. The engine comes paired to a six-speed manual gearbox. Tata Motors is expected to upgrade the powertrain to make it BS6-compliant soon. The upgrade is expected to make the engine as powerful as the one offered with the Jeep Compass, which means that the power output will be in the range of 170bhp. An automatic version, as well as a turbo petrol engine, is also in the pipeline.

In addition to the new drivetrain, Tata Motors is also working on a larger seven-seat version of the Harrier. It was revealed at the 2019 Geneva Motor Show recently and was christened the Buzzard. Its market launch will only happen in 2020 though.

At the moment, the main task for the Tata Harrier will be to compete against the recently launched MG Hector, but soon the duo will be joined by the new Kia Seltos.