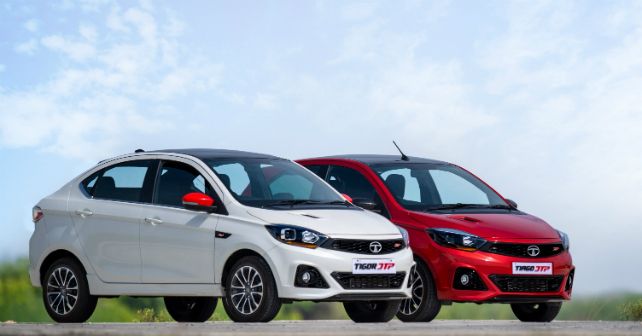 Tata stepped into the affordable performance segment with the launch of the Tiago and Tigor JTPs in October last year. Less than a year into the launch, the company has given both the cars minor updates. The refreshed Tiago JTP is priced at Rs 6.69 lakh – a hike of Rs 30,000. The Tigor JTP now demands Rs 7.59 lakh – just Rs 10,000 over the model it replaces. Both prices ex-showroom New Delhi.

Updates to the Tiago and Tigor JTPs are more on the inside. Both cars do away with the small 5.0-inch touchscreen infotainment system and in its place comes a larger 7.0-inch unit. Unlike before, this unit is compatible with Apple CarPlay and Android Auto too. Additionally, the JTPs now also come with electrically folding ORVMs – the older models only come with an electric adjustment feature. The Tiago now comes with an electronic climate control as well. Other changes include seat belt reminder for the driver as well as front passenger and a high-speed alert. Both cars now also come with a sharkfin antenna. In terms of features, the hatchback and the sedan are equally matched now.

Everything else about the Tiago JTP and the Tigor JTP remains unchanged. Both cars continue to sport projector headlamps, redesigned bumpers, contrast ORVMs, 12-spoke alloy wheels, side skirts and several other sporty looking bits all around. At the heart, both cars continue with the same 1.2-litre three-cylinder turbocharged petrol motor. There is no change in the output figures as well – the motor continues to make 110bhp and 150Nm.

Although the Tiago and the Tigor JTPs haven’t been rocking the sales charts, there is no denying that they are great options for someone wanting affordable performance. This update should help give both the cars a bit of a push.