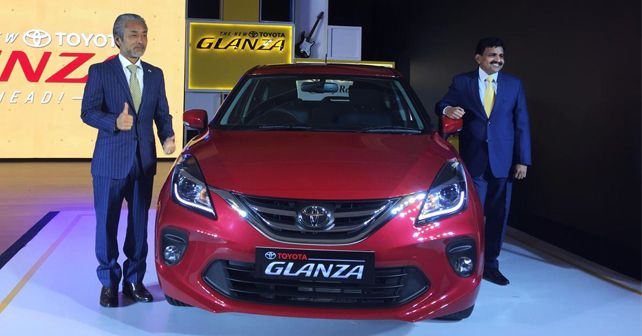 The first cross-badged offering from Toyota and Maruti Suzuki's alliance has finally landed. Dubbed the Glanza, it's a premium hatchback that is based on the Maruti Suzuki Baleno, but unlike the latter, it's only offered with petrol powertrains.

The Toyota Glanza has finally arrived! The prices of the hatchback start at Rs 7.22 lakh and go all the way up to Rs 8.90 lakh - both prices are ex-showroom, Delhi.  There are two variants on offer – namely, G and V – and both are available only with petrol engine options.

Now, if you don’t already know, the Glanza is Toyota’s latest hatchback for the Indian market but, more importantly, it’s the first cross-badged product to come out from the Toyota and Maruti Suzuki alliance. So, essentially, the Glanza is a Maruti Suzuki Baleno with Toyota badges. And it won’t take you long to figure out. Apart from a new grille and Toyota logos, the Glanza is identical to the Baleno.

Inside, it’s a similar story. The cabin layout is identical to the Baleno, but the Suzuki badge on the steering wheel is replaced by Toyota’s logo. Since the G & V trims are based on Baleno’s top-end Zeta and Alpha trims, they are decently kitted out with features. Standard equipment in the Glanza includes LED projector headlamps, a 7.0-inch touchscreen infotainment system with Android Auto and Apple CarPlay connectivity, 16-inch diamond-cut alloy wheels, electrically-adjustable and folding ORVMs, automatic climate control, et al. The V variant gets additional features such as a rear parking camera, automatic headlamps, leather-wrapped steering wheel, and LED daytime running lights.

The Glanza will be offered with two 1.2-litre petrol powertrain options, which are the same as the Baleno. The first engine option is rated at 82bhp @ 6,000rpm and develops 113Nm of torque at 4,200rpm. It is available with a 5-speed manual or a CVT automatic. The second and the more powerful unit is a mild-hybrid version of the same 1.2-litre motor – or the SHVS as it’s called in the Baleno. The engine develops 88.5bhp @ 6,000rpm and 113Nm @ 4,400rpm. The mild-hybrid unit is only available with a 5-speed manual transmission, just like the Baleno. Surprisingly, though, the Glanza G MT is around Rs 60,000 cheaper than the equivalent Baleno Zeta SHVS.

The Toyota Glanza will have 1 lakh kilometres/3-year standard warranty. The competition will include the likes of the Maruti Suzuki Baleno, of course, as well as the likes of the Hyundai Elite i20, Volkswagen Polo, et al.