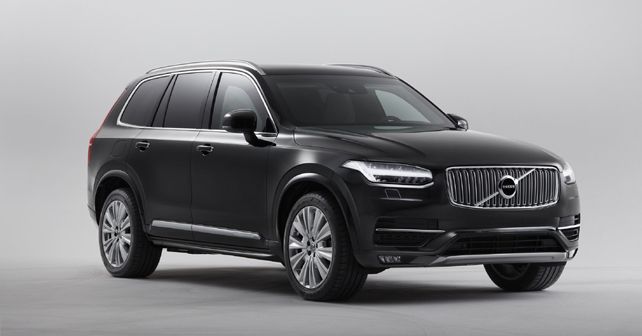 Owing to strong global demand from customers, Volvo has ventured into the armoured vehicle territory with the reveal of the XC90 Armoured.

From politicians to high-profile entrepreneurs to some movie industry bigwigs, all individuals who often find themselves at risk when it comes to their lives, prefer roaming around in armoured vehicles. Moreover, with more & more brands venturing into making such vehicles, the demand for these vehicles has also gone up over the years. Well then, why should one of the world's leading car manufacturers, with a reputation for building some of the safest cars, stay behind?

Due to strong demand from Volvo loyalists, the Chinese-owned Swedish carmaker has come up with the XC90 Armoured. 'We are proud to be able to offer these armoured cars. With our armoured cars, we can provide vehicles with a high level of personal security for individuals who require heightened protection,' said Stephan Green, Marketing Director at Volvo Cars (Special Vehicles Division).

Folks at Volvo claim they've spent nearly two years developing the XC90 Armored, with an aim to achieve a VPAM VR8 rating. For those not aware, VPAM is a German organisation which tests & develops bullet-proof materials. In short, their rating & certification for armoured vehicles are renowned across the globe. The VR8 rating, on the other hand, signifies that the Volvo XC90 Armoured offers 360-degree ballistic & explosive resistance.

Underneath all the extra armour cladding sits a Volvo XC90 T6 AWD Inscription. From Volvo's Torslanda plant in Sweden, the XC90s earmarked to become the Armoured versions then head to TRASCO Bremen GmbH in Germany for the armouring. The high-strength steel used in the armouring is 10mm thick and the glass thickness can go up to about 50mm. All of this, however, adds about 1,400kg to the XC90's weight, which makes the final car weigh at around 4,490kg! So, to make sure the car can sustain this add on weight, the XC90 Armoured gets an upgraded suspension and a new set of more powerful brakes.

To cater to the group which demands a lower level of protection, such as diplomats or other private individuals, Volvo also makes an armoured (light) version, which can either be based on the same Volvo XC90 T6 AWD Inscription or on the smaller XC60 T6 AWD Inscription. Volvo has opened its order books for the Volvo XC90 Armoured, with deliveries set to begin by the end of 2019.