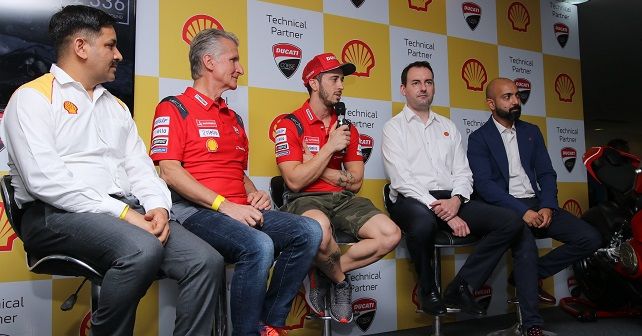 The only way motorcycle fans in India can get close to seeing some MotoGP action is usually on race weekends – in front of their television sets or smartphones. For us lot, seeing MotoGP riders – let alone actual races – in India is a distant dream. However, last Sunday – 29th October, 2019 – was a bit different as we got to witness one of the current MotoGP greats in our country – Andrea Dovizioso!

For the uninitiated, Andrea Dovizioso races for Ducati in MotoGP and he’s one of the leading riders in the world. In fact, he finished second in the world championship in 2017 and 2018, with numerous wins and podium finishes. Even this year, he’s running second in the points table and is likely to finish the season in the same spot. Dovizioso was in India for a special occasion – the factory Ducati rider was here to celebrate Ducati and Shell Lubricants’ partnership in India. The two firms also used this as an opportunity to organise the first edition of Shell Ducati Riders’ Day at the Buddh International Circuit in Greater Noida.

While Dovizioso grabbed all the limelight – along with Ducati’s Sporting Head Paolo Ciabatti – the event also saw participation from over 100 Ducati riders. During the event, Ducati DRE-Certified trainers provided exclusive training to participants for the Ducati Road Academy to improve riders’ skills, thereby ensuring safe riding. This was followed by the Ducati Open Track Day which provided all Ducati superbike owners, excluding the Scrambler range, an opportunity to ride on the track.

Ducati India also used the Shell Ducati Riders’ Day to announce their official racing team for the 2019 Superbike Racing season. The team will be led by ace Indian racer and multiple national championship winner, Rajini Krishnan, and he will be joined by young talent Dilip Lalwani, and Neharika Yadav. Additionally, Aakash Rajshakha and Bhumik Lalwani were also named as the official pilots for the Ducati's satellite team, which will take part under the banner of North Star Automotive Ducati – the current dealer partner of Ducati in Delhi/NCR.