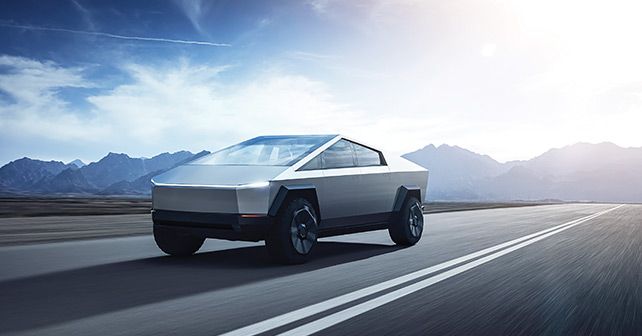 The balance of power between electric and conventional vehicles ebbs and flows, but nothing makes headlines like a broken Cybertruck!

‘I was misquoted,’ said Porsche CEO Oliver Blume. I had arrived at the company’s headquarters in late October to formally hand over the German Car of The Year award. The Taycan had snatched victory against an impressive field of competitors. Besides the Porsche, the BMW 3 Series, the Mazda 3, the Opel Corsa and the Peugeot 208 had made it to the final round. Blume had just come from an automotive conference, where he supposedly gave an ultra-tight timeframe to replace internal combustion engines. As it turned out, he hadn’t.

And that’s a good thing. Despite the impressive qualities of the company’s fully electric Taycan. The car’s performance and road-holding is nothing short of surreal, and the execution is flawless. But I found it curious that the packaging sacrificed practicality for style. A Panamera, which is within centimetres of the Taycan’s size, offers the rear seat comfort of an S-Class and almost the utility of a station wagon, yet it packs a longitudinally-mounted V6 or V8 and an 8-speed automatic. By contrast, the Taycan seems to offer the space of a compact sedan. Weren’t electrics supposed to offer massive packaging advantages?

Moreover, the Taycan’s acceptable range turns abysmal when you use the powertrain’s potential, especially when ascending mountain passes. Sure, it’s electric, and it can do virtually everything better than a Tesla by a magnitude. But we’re glad that there are still gas-powered cars around. Especially Porsches!

Only a few weeks later, I met with Dhruv at the Los Angeles Auto Show to put the Taycan, and a number of other promising contenders, through their paces for our World Car of The Year selection. Each and every entry was impressive, but one of my favourites was another Porsche – the Boxster Spyder, with its naturally aspirated 4.0-litre flat-six and manual six-speed gearbox. It represents the polar opposite of the automotive spectrum, yet its purpose is the same. Pure driving pleasure!

One impressive takeaway was the quality of the Korean entries. Hyundai and Kia have well and truly surpassed the European, American and Asian mainstream brands in terms of styling, fit-and-finish. But, then, VW’s T-Cross proved that Wolfsburg still knows how to make a crisp, precise and fun-to-drive car in every segment.

But, in every other respect, VW has a lot of catching up to do. A company insider told us, ‘The cars drive much better than they look,’ referring not to their shape but to the perceived quality. We couldn’t agree more. And with the brand's devotion to electrics, the future for VW’s powertrains looks bleak. Development is currently focused on the 1.5-litre and the 2.0-litre TSI – and the 2.0-litre TDI. The 1.0 TSI and the 1.6 TDI get no more love, and the VR-6 is now virtually dead. Hopefully, Wolfsburg will let Audi and Porsche continue to refine their V6 and V8 offerings. In fact, the Touareg V8 TDI, with its Audi-developed engine, which I recently tested in Iceland, maybe the best car I’ve driven this year.

In Los Angeles, VW launched the Space Vizzion concept, a surprisingly conventional station wagon with a fully electric powertrain. Still, it was one of the lookers at the show, next to the unfortunately named Ford Mustang Mach-E, a portly four-door SUV with a few Mustang cues splashed on, and the Hyundai Vision T, which hints at the next-generation Tucson.

But the most stunning car during the Los Angeles Auto Show week was shown off-site. I’m talking of the much-anticipated Tesla Cybertruck, a full-size pickup designed to take on America’s best-selling vehicle, the Ford F-Series. Its unveiling caused shock and awe, but not necessarily in a good way. The pyramidal shape is incredibly futuristic, but its execution lacks the sophistication to a shocking extent. Judging from social media reactions, Tesla has misstepped.

At least the presentation was entertaining. When Tesla guru and universal genius Elon Musk asked his chief designer to smash the window of the Cybertruck, presumably to show its strength, Franz von Holzhausen complied – and the window shattered into pieces. Musk had to finish his presentation in front of a broken truck.

The road to e-mobility can be entertaining, for wrong reasons!