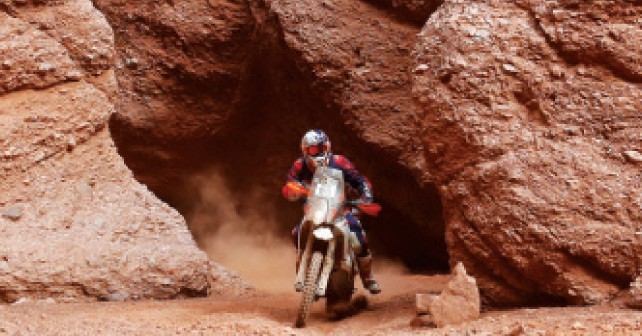 The heroics of CS Santosh in the Dakar are sure to inspire a whole generation of motorcyclists of course, but also motorsports enthusiasts in general. He proved, very convincingly, that Indians can be serious contenders in the world’s top motoring events.

Champion riders like Santosh make rallying look so easy. They fly over all that sand and dirt, and power slide their way out of tight corners as they look ever so cool. But behind all these cool acts are countless hours of dedicated practice – and practice is a costly affair. An overwhelming number of riders in India either practice and race with the same bike, or they don’t have access to a practice and race bike of the same specification. With that said, motorcycle rallying, motocross and dirt biking is cheaper than circuit racing on big capacity bikes – and that’s the primary reason why we see more riders participating in these categories.

While there are lots of big sports bikes available in the country, there are absolutely no bikes that are really meant for rallying or motocross. Ever since the Yamaha RX 100 was launched in the 80s, it was modified by riders to go dirt biking and rallying – and they’re really no further along, even now! The arrival of the Hero Impulse added a little variation, but it hasn’t really taken off. And only a microscopic minority of riders can import a real rally or motocross bike. The high import taxes and the cumbersome import procedures are a huge deterrent.

This is where the two-wheel manufacturers can play a big role in grooming riders. In the West, all the major manufacturers have racing schools and riders start at very young age. There are schools for track racing, for off-roading, dirt biking and motocross. The riders graduate through the drill, and in the initial stages of their racing / rallying career, many riders are supported to a large extent by the manufacturers.

Manufacturers like KTM, Honda, and some others have full-fledged racing schools – and if you follow racing or rallying, you’ll see that many of the champions in different levels, and in different fields, are direct products of these schools.

TVS is the only Indian manufacturer that has a factory team in motocross events. But they don’t have a proper grooming school. They pick up promising riders, and then groom and support them – but even that is of huge help to riders who would otherwise have been riding a modified RX100 or second hand imported motocross bikes instead.
Hero Motors supports a team that races in the Indian motocross circuit, but it’s not a full-fledged Hero factory team – far from it in fact.

We do have one-make races, but the riders are privateers and it’s extremely hard for a privateer to be competitive (unless you have plenty of money to burn). The riders have to pay to use the bikes in the championship, which allows them use of the bike in the qualifying race and the main race. For practice, they have to use their own machine, own fuel, and then there’s the issue of renting the track for practice… let’s just say it’s an expensive proposition. Why can’t the other manufacturers do something at least to the level of what TVS is doing?

While it seems a little too much to expect manufacturers in India to set up a proper racing school in the near future, they can at least start by supporting the talented riders. Santosh had to work tirelessly to raise a huge sum of money to participate in the Dakar. Most Indian riders can’t even dream about the money needed to prepare and participate at the top level.

If a manufacturer supports a promising rider with financial aid and motorcycles, it’ll ease the pressure on him and allow him to concentrate solely on the business of riding. It’s a win-win situation for all. The manufacturers presence will mean better motorcycles and better riders, and the standard of the events will go up by several notches. And these events are the perfect promotion grounds for these very manufacturers. Their products will be seen, heard, talked about, and, ultimately, sell – because they would have proven their worth in the heat of competition.

Race on Sunday, sell on Monday… that’s the mantra, and the sooner the manufacturers realise that, the better it’ll be for them and for all us motorcycle enthusiasts.