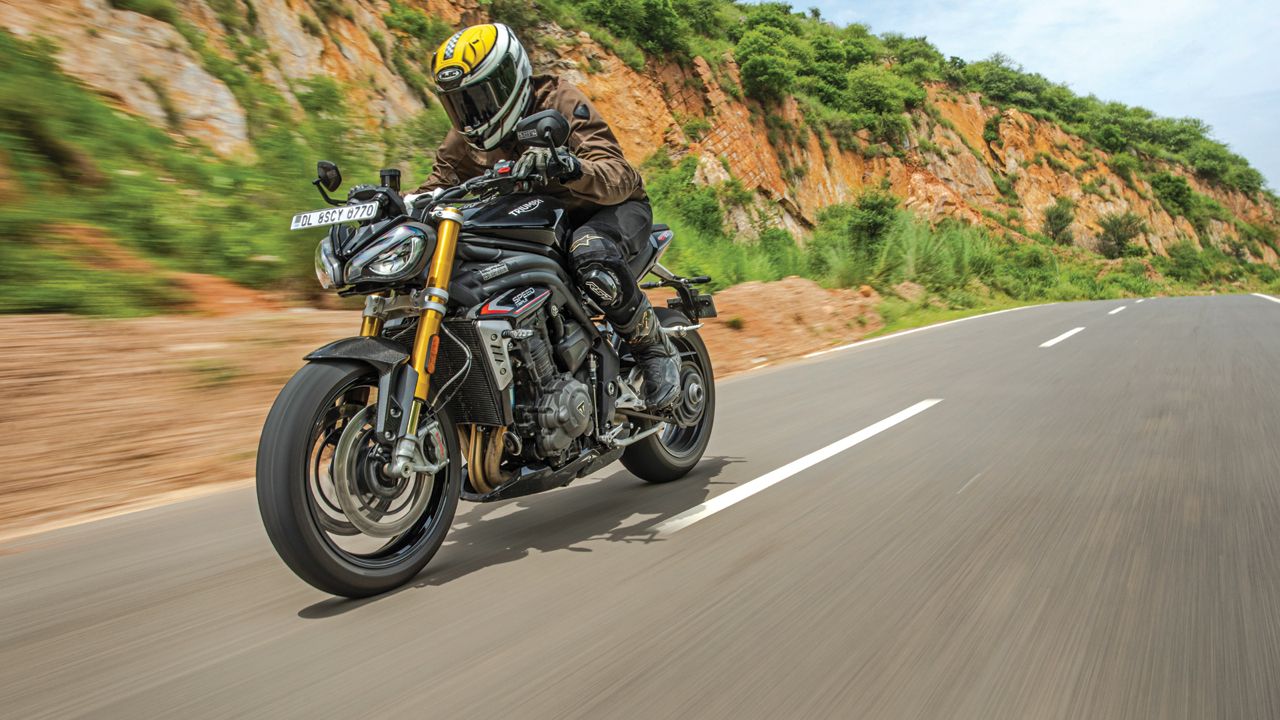 ‘The whole world is going mad, so why should the Speed Triple be left behind?’ thought Triumph. A step too far, or does it make the ‘original hooligan’ more desirable than ever?

180 horses, 125Nm of twisting force, 1,160cc of displacement, top drawer Ohlins, and Brembo components – all of that barely contained together in an aluminium frame! What’s more, the whole bike weighs less than 200kgs! In an ideal world, these are superbike numbers and facts. But what we’re talking about here is the all-new Triumph Speed Triple 1200 RS. It’s not a track-going machine with slippery bodywork, but a naked superbike slayer for the real world. Long story short, the new Speed Triple is batsh*t crazy!

In the olden days, the Speed Triple was a bit of a comfy cruiser – a powerful naked for the road, but it was a bit relaxed. Some would even call it lazy. But earlier this year, Triumph decided to change the ‘Speed’ narrative, and thus was born the Speed Triple 1200 RS. It only takes a minute to figure out what’s cooking here. Noticed the 1200 RS in its name yet? Yes, it’s not the same old heavyweight as it used to be. Instead, it has become a bit racy and a heck of a lot more intense. 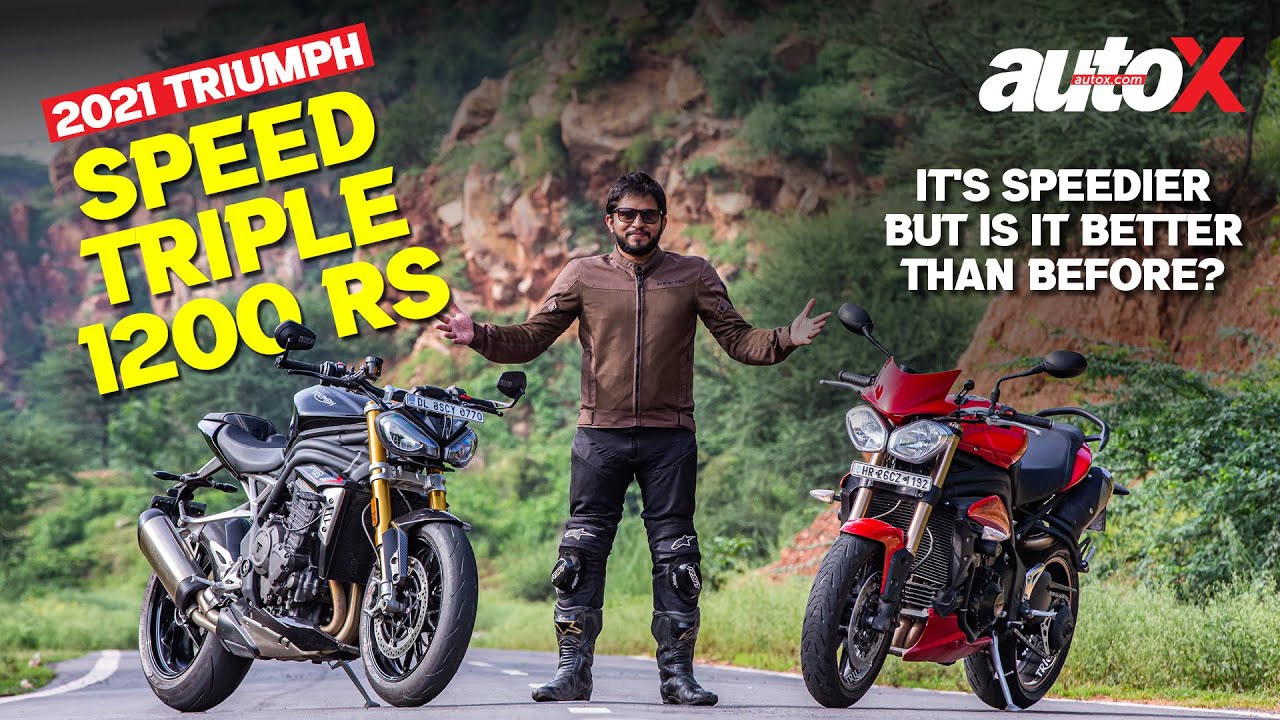 Born to be Wild

The Speed Triple’s history goes all way back to the early 90s when Triumph brought the ‘original hooligan’ in 1994. At that time, naked streetfighters weren’t a thing, but it was the likes of the Speed Triple or Ducati Monster that created this segment. Rumour has it that these naked bikes originated from crashed race bikes. Financially broke racers who couldn’t afford to fix the expensive bodywork of their fully-faired racing motorcycle after a crash would ride their motorcycle without fairing on the road. Soon, it became a trend, and with time, the naked bike began to evolve into a more road-friendly version of the sports bike, with less bodywork, a retuned engine for better road performance, taller and wider bars, and comfy ergonomics.

Interestingly, after years of evolution, we’re now back to square one. Today, naked motorcycles are getting hyper again. They are powerful, aggressive, and outright insane but not without reason, for motorcyclists around the world seem to lap up the idea. And that’s why you have the likes of Ducati Streetfighter V4, BMW S 1000R, Kawasaki Z H2, Aprilia Tuono, and KTM Super Duke R 1290 doing so well.

For long, Triumph resisted the idea of a super-naked, but the Brits have now finally conceded. And with the new Speed, they’ve dialled it all the way up to eleven! Apart from its family name, there’s nothing that’s been carried over in the new version. The frame, engine, suspension, and electronics – everything is spanking new. It’s now also slimmer, lighter, and meaner. In fact, think of it as more of a Street Triple RS with a fast forward button for throttle. 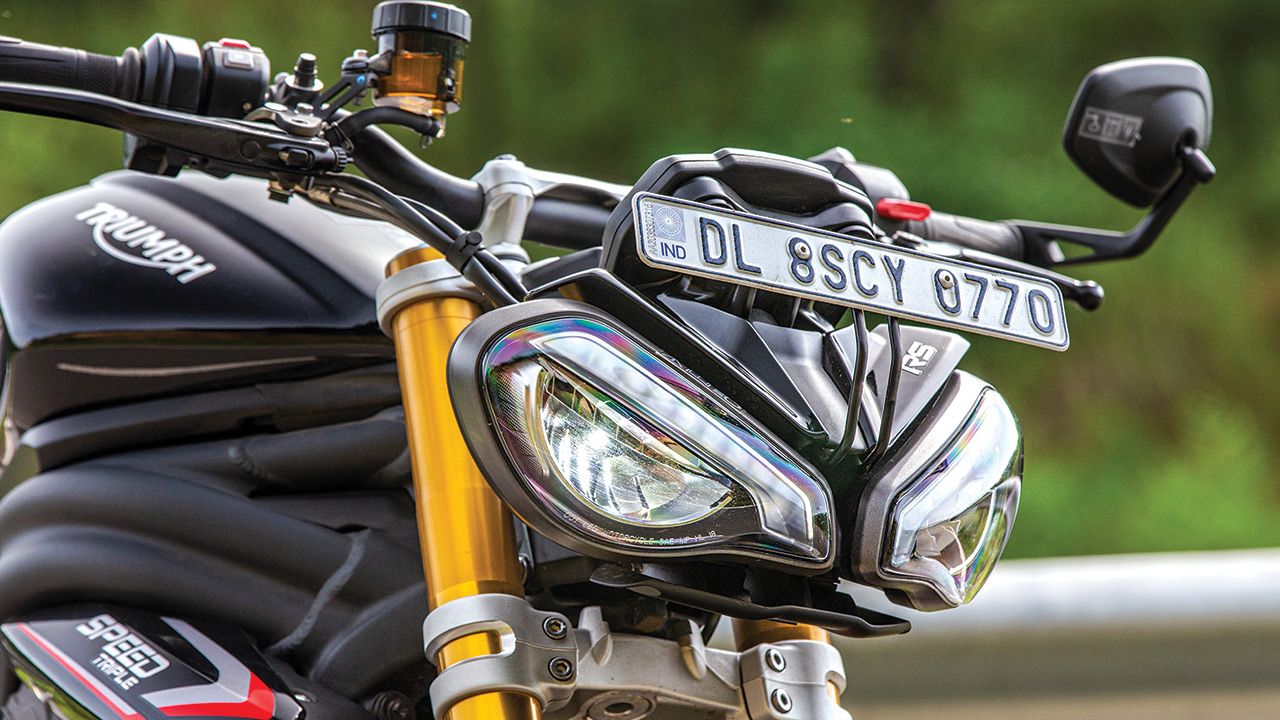 The moment you lay your eyes on the Speed RS, you can’t help but notice the family resemblance. The sharp and slim bug-eyed LED headlamps, naked aggression, and signature Triumph attention-to-detail are all very similar to the Street RS. It definitely looks like a Street Triple RS on steroids – a bit like seeing an old friend who has just completed his 2-year subscription to Gold Gym. All muscular and toned!

Having said that, let me add that there’s nothing remotely bulky about the Speed Triple 1200 RS when compared to its old self. It now has a slimmer fuel tank, relatively compact dimensions, and a number of sporty and classy styling elements, like bar-end mirrors or T-shaped taillight. A bit of the cool factor is lost though, for, unlike its predecessor, it no longer features twin under-seat exhaust pipes – it gets a single exhaust canister instead. The single-sided swingarm, however, has been retained. The quality and fit-and-finish levels are quite impressive, but for the price, you do feel it could have been better in places, especially the weld points.

Speed has always been the name of the game with this Triple, which hasn’t changed with the new iteration as well. If anything, it has become even faster and more mental than ever. In comparison to the old bike’s 1,050cc engine, the new Speed has a bigger 1,160cc heart. It develops 177.5bhp at 10,750rpm and 125Nm of torque at 9,000rpm – an increase of 30bhp and 8Nm.

There’s no denying that the engine is nothing short of a nuke! The throttle response is superb, and the performance is mind-blowing. As you’d expect from a Triumph, the fuelling is crisp and acceleration is progressive. From 2,000rpm to 4,000rpm, the engine response is subdued. And that’s the beauty of a Triple – it’s never wild or choppy like V-twins or dead like an inline-4 at low revs. 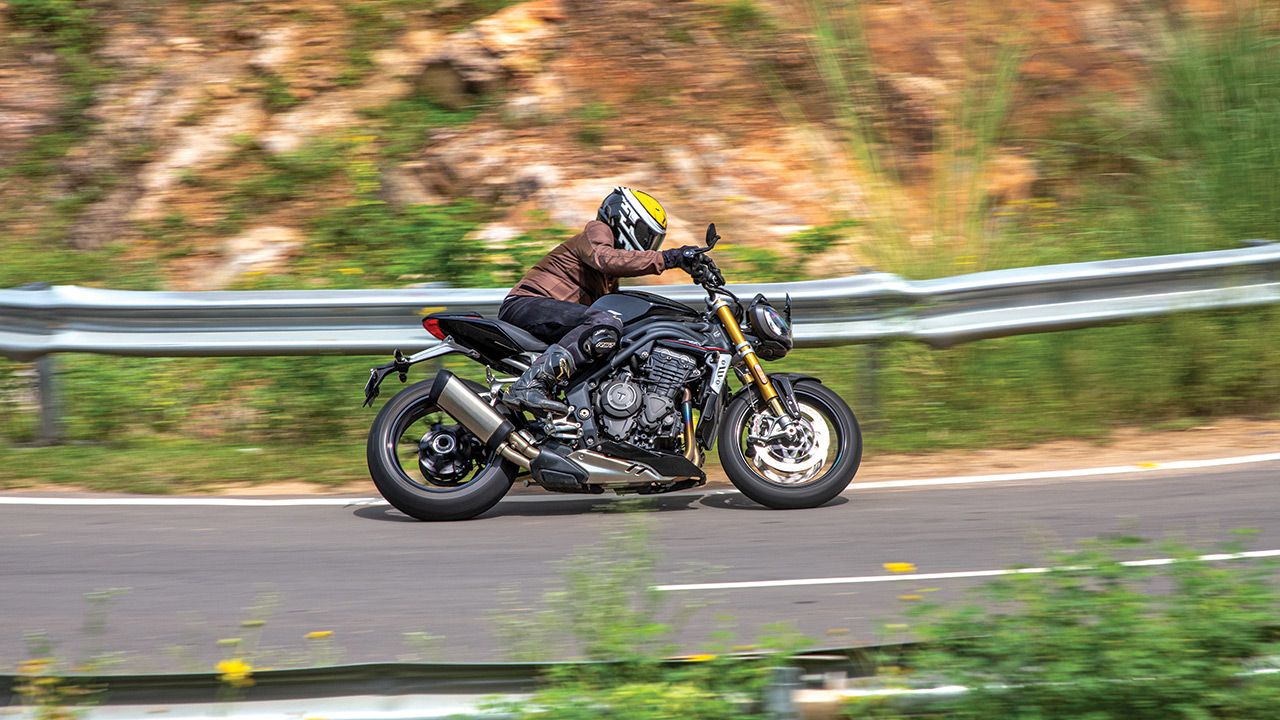 For a brief second, you’d be fooled into believing that this motor is all smooth and tame, but once the tach needle goes past 4,000rpm, it turns into an absolute beast. It won’t throw any ugly surprises, but there’s a you-had-been-warned sort of naughty side to this motor. It underplays its brutality in the beginning, and, then, it suddenly overwhelms you. It’s a mad, mad engine and feels supremely refined and responsive all the way up to its 11,500rpm redline. And while you’re at it, it also doesn’t shy away from pointing its front-wheel nonchalantly towards the sky.

But it’s not all sunshine and rainbows with the new Speed. In fact, there are a couple of things that can and will drive you mad if you start using this bike on public roads, especially on our chocked streets. First and foremost, it doesn’t have the low-end grunt of its predecessor. I rode it back-to-back with the old-gen Speed Triple during this test and noticed the difference immediately. While the torque delivery was strong at low rpm in the old bike, the new Speed felt relatively weak. And this is something that you’ll miss when you ride it in stop-go traffic. 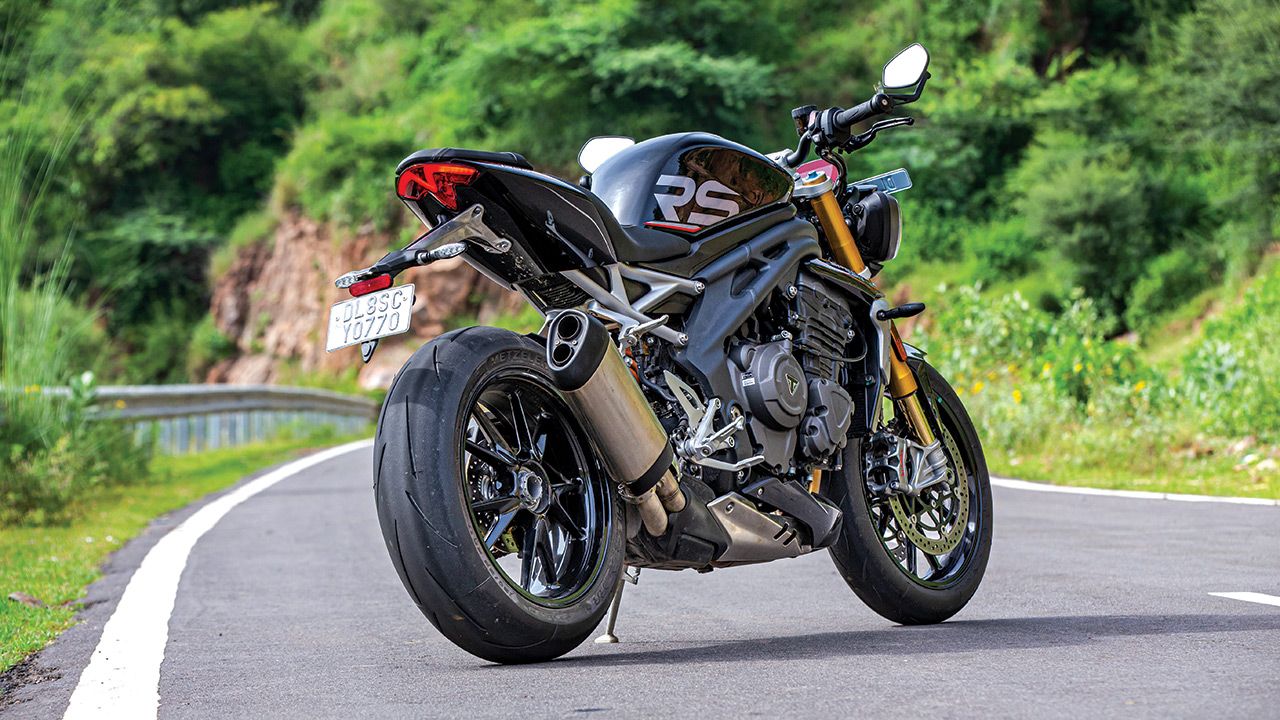 However, when you do find yourself stuck in traffic, the weak bottom-end will be the least of your worries. Forget peak hours, even in moderate traffic, the clutch on this bike is hopeless. Plus, the bike gets hotter than a barbeque grill within seconds, making it unbearable at low speeds. That Triumph decided to ship the new Speed Triple without a hydraulic clutch is quite surprising, for the cable clutch is not up to the job. After riding it for a day, I could immediately feel the slack as the clutch wasn’t disengaging properly. We tried to adjust the cable tension but in vain. All this results in a juddery engine response at low speeds. Not to mention, the bike also stalls a lot without any warning.

On the upside, the six-speed transmission, fitted with an up/down quick-shifter as standard, is a work of art – it’s smooth, precise, and fuss-free. The only trouble is that on public roads, the quick-shifter is hardly useful. You would run out of space within the first two gears. With a neck-snapping acceleration – 120km/h appears in first gear – you’ll always find yourself getting too close to numerous variables – people, cows, potholes, etc. – that our roads are riddled with. However, when you do find yourself in such a situation, I bet you’d thank the Speed’s brakes before God. The Brembo Stylema callipers paired with the Brembo MCS brake lever offer phenomenal stopping force. I am willing to bet that this braking setup is easily one of the best on any bike in the world right now.

For once, you might ignore its finicky clutch but not the ride quality. Even though the Speed comes with fully adjustable Ohlins suspension, the ride is inherently firm. On bad roads, the ride is choppy. We tried a couple of different compression and rebound settings but, once again, in vain. As a road bike, then, the new Speed could certainly do better, especially considering the old Speed Triple’s plush ride. Also, a semi-active or electronic suspension is missing here – Triumph could have offered it as an option if not as standard.

On the flip side, the handling is simply brilliant! Show it your favourite (smooth) road, and see it come alive and how. Gone is the top-heaviness of the old Speed – you no longer have to wrestle the bike around corners. The Speed now weighs 10kgs less than the old model. Honestly, it feels as agile and quick turning as the Street Triple, but given its longer wheelbase, the Speed, unlike its younger sibling, doesn’t feel twitchy during quick direction changes. The front-end drips with feel, and you can carry so much speed and confidence around corners. On track days, in able hands, the Speed Triple RS, in stock form, can give some established superbikes a run for their money. 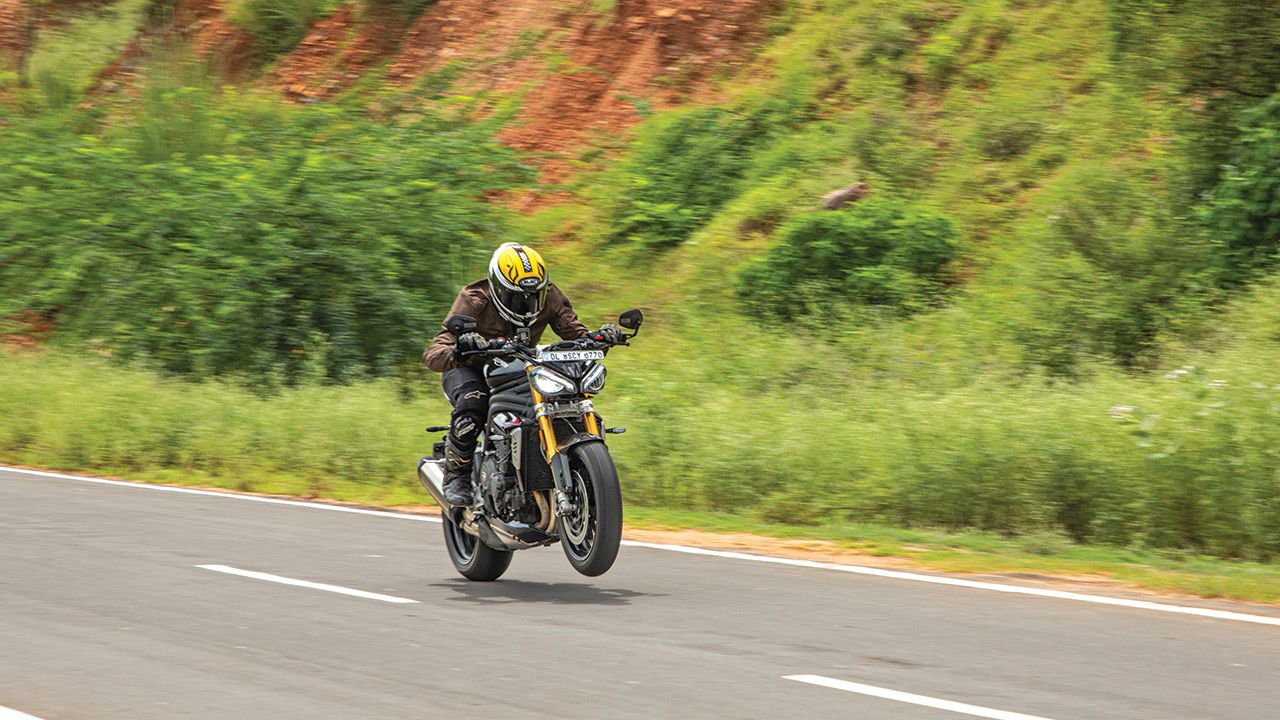 The electronics are less intrusive than how they feel in the Street Triple RS, too. However, I don’t like the new TFT display – it has a nice layout, but it lags and doesn’t feel as sophisticated as the Street Triple RS’ display. Plus, during the test, it kept showing a TPMS error despite the fact that the bike wasn’t equipped with the system.

As a road bike or a streetfighter, the Speed Triple 1200 RS has a few caveats. You see, it hates going slow and rides pretty firm. And even though it’s loaded to the brim with features, there are a couple of crucial components missing. But, then, it’s priced really well, and it’s remarkably more affordable than its direct rivals.

Having said that, I can’t see who is Triumph’s target audience for this motorcycle. On this test, we were joined by two of our friends – one of them owns the old Speed Triple, and the other has the current-gen Street Triple RS. Both loved and appreciated the changes, but both said they aren’t willing to consider upgrading to the new Speed Triple. Reasons? It’s no longer a plush road bike like its predecessor, and nor does it have the all-round capabilities of the Street Triple RS. 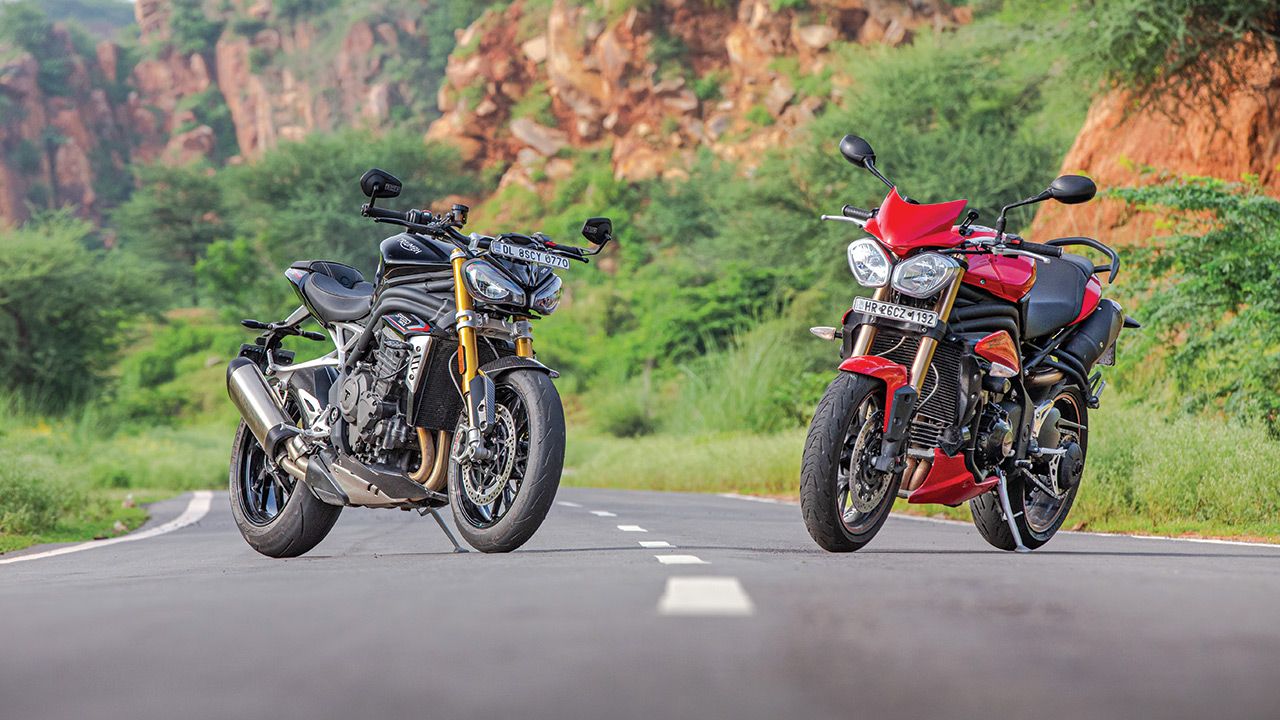 What Triumph has created in the Street Triple 1200 RS then is a track-motorcycle that doesn’t look like one. Sure, it may have lost the ethos of its immediate predecessor, but in doing so, it’s gone right back to its roots of being the ‘original hooligan’. 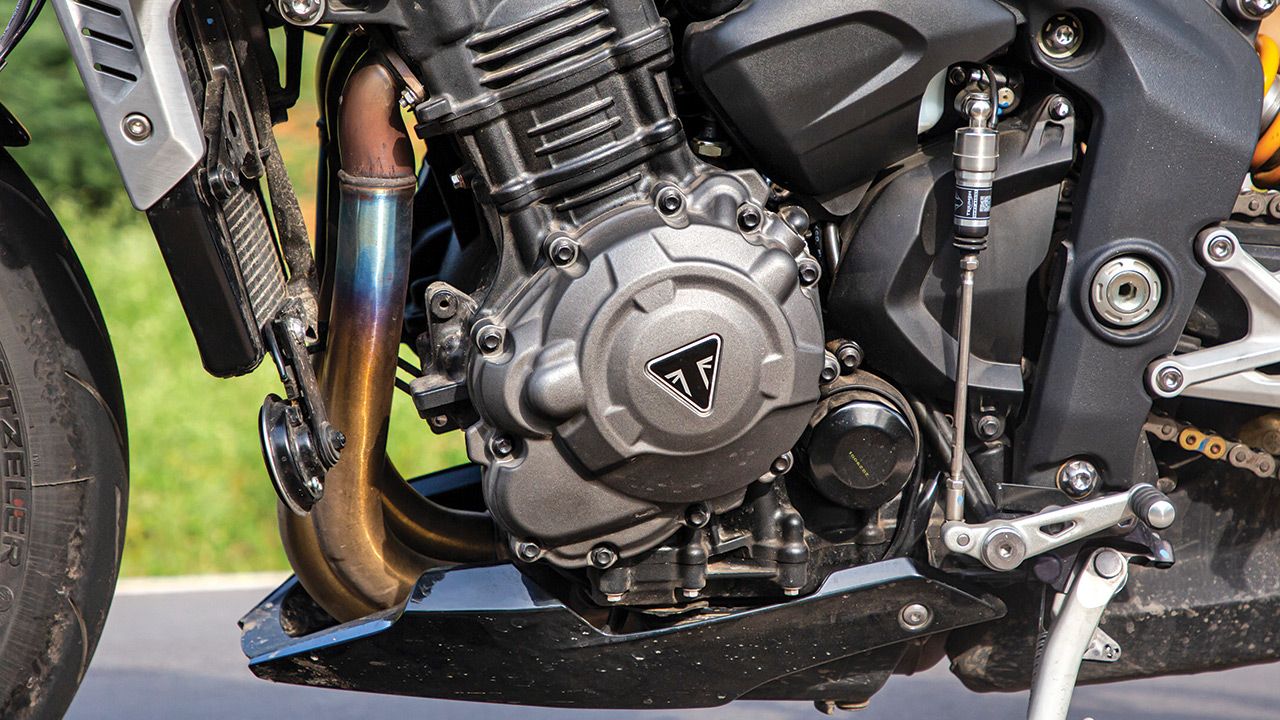 The new triple engine is refined and, in terms of performance, it’s bonkers. That said, it can be overwhelming on public roads. The Brembo Stylema callipers offer amazing stopping force. 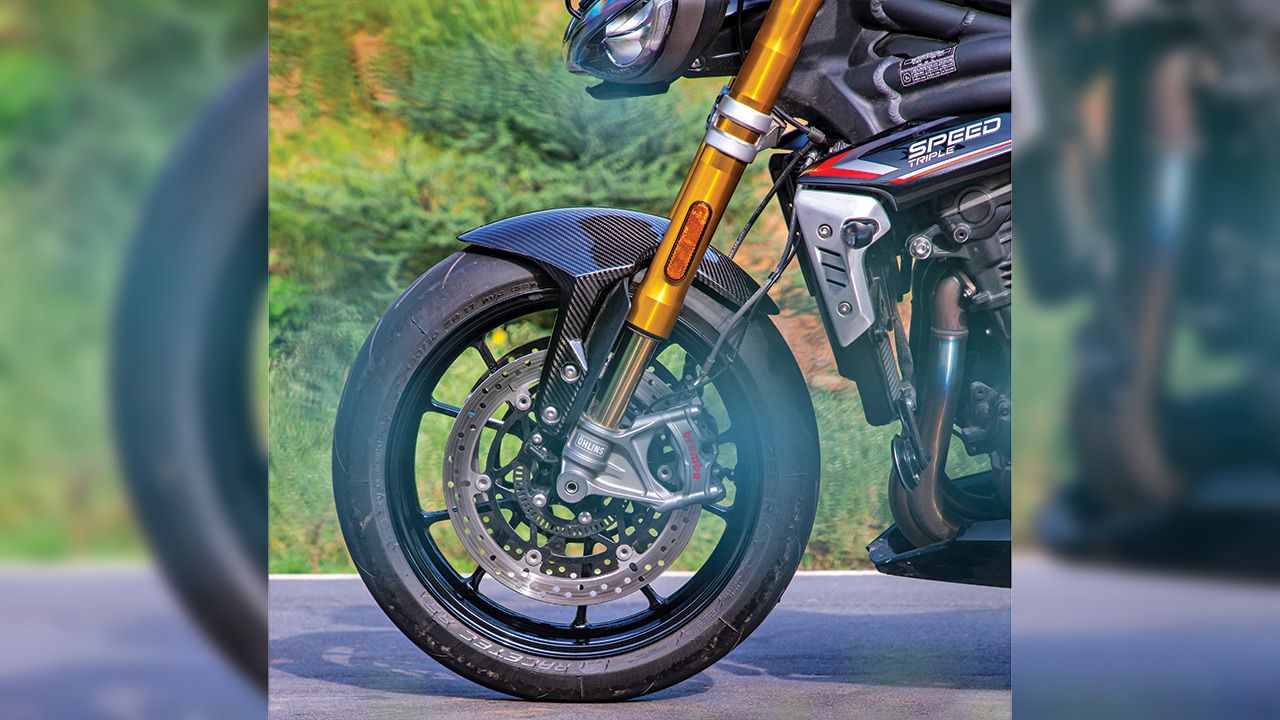 X-Factor: The speediest Speed Triple ever – it's a race bike in the shape of a street motorcycle. 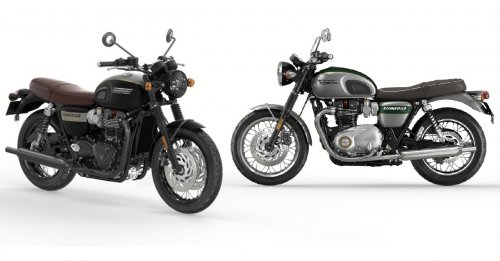 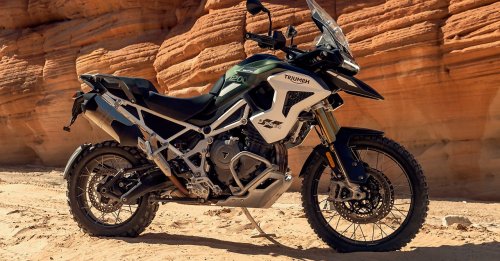 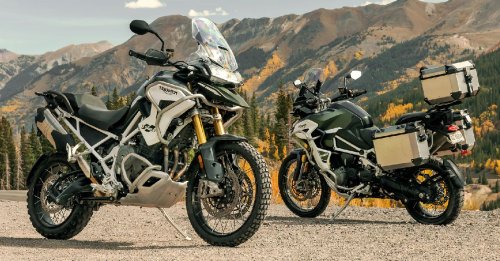 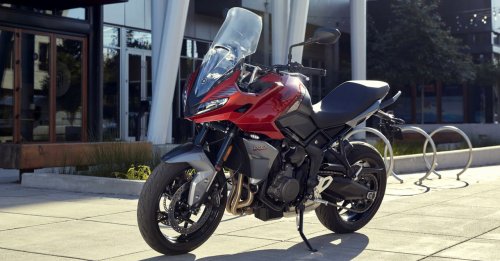