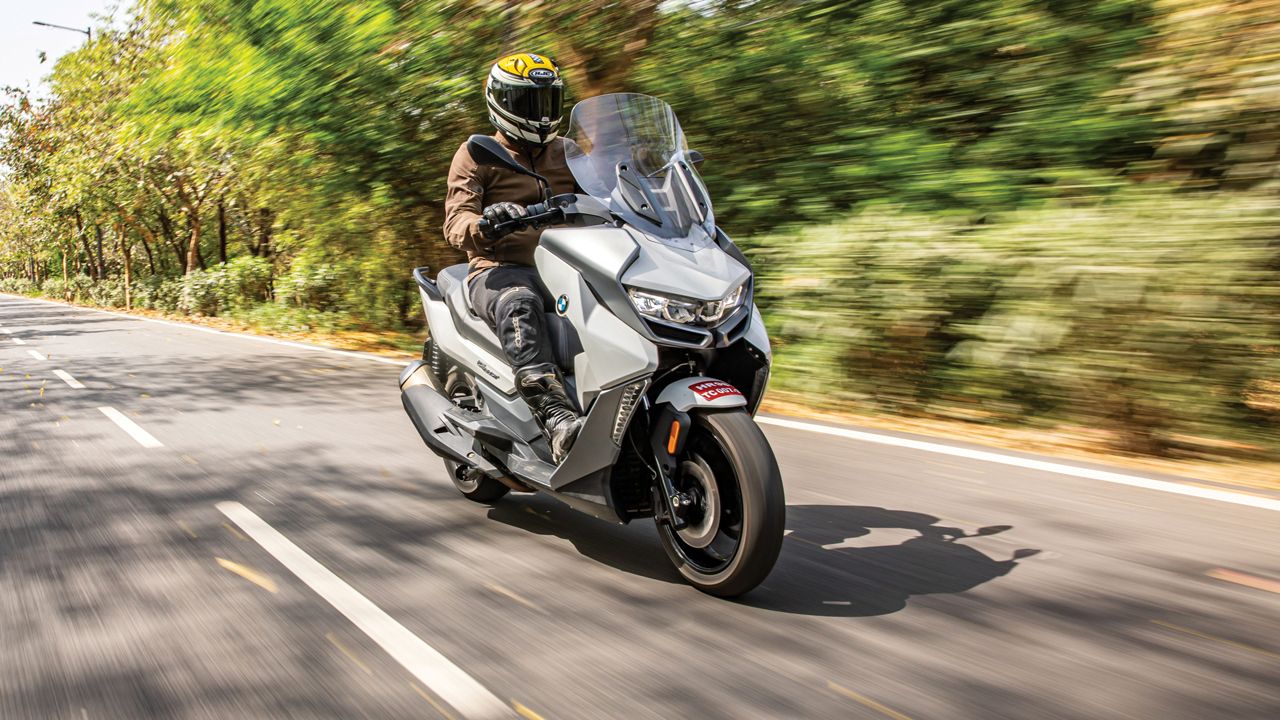 You may think of it as a luxury runabout for the rich and wealthy, but the BMW C 400 GT is essentially a touring maxi-scooter. What’s the actual deal here though?

Is it a motorcycle or a scooter? How much does it cost? ₹10 lakh, really? What the heck!  Why so expensive? Who in their right mind would spend that kind of money on a ‘scooty’?

These were some of the questions that I got asked over and over again during the four days I spent riding BMW’s stunning, albeit exorbitantly priced, C 400 GT. Now, if you don’t already know, the C 400 GT is the most powerful and most expensive scooter that money can buy in India, at the moment. So, long story short, if you are rich enough to splurge a ridiculous sum of money on a luxury item on two wheels, look no further than the C 400 GT.

However, if you want your next set of luxury wheels to be more than just a showpiece, well, then, you’d definitely be interested in knowing if it’s worth spending a million bucks? That’s precisely what we’re here to find out. However, we didn’t want to test it in a regular manner because the C 400 GT isn’t your ‘regular’ scooter or an urban runabout for big bosses and CEOs of MNCs. This scooter is, on the contrary, a touring machine. So, we thought, why not go mile-munching on it and see if this pricey piece of a toy can actually be used for long-distance touring? 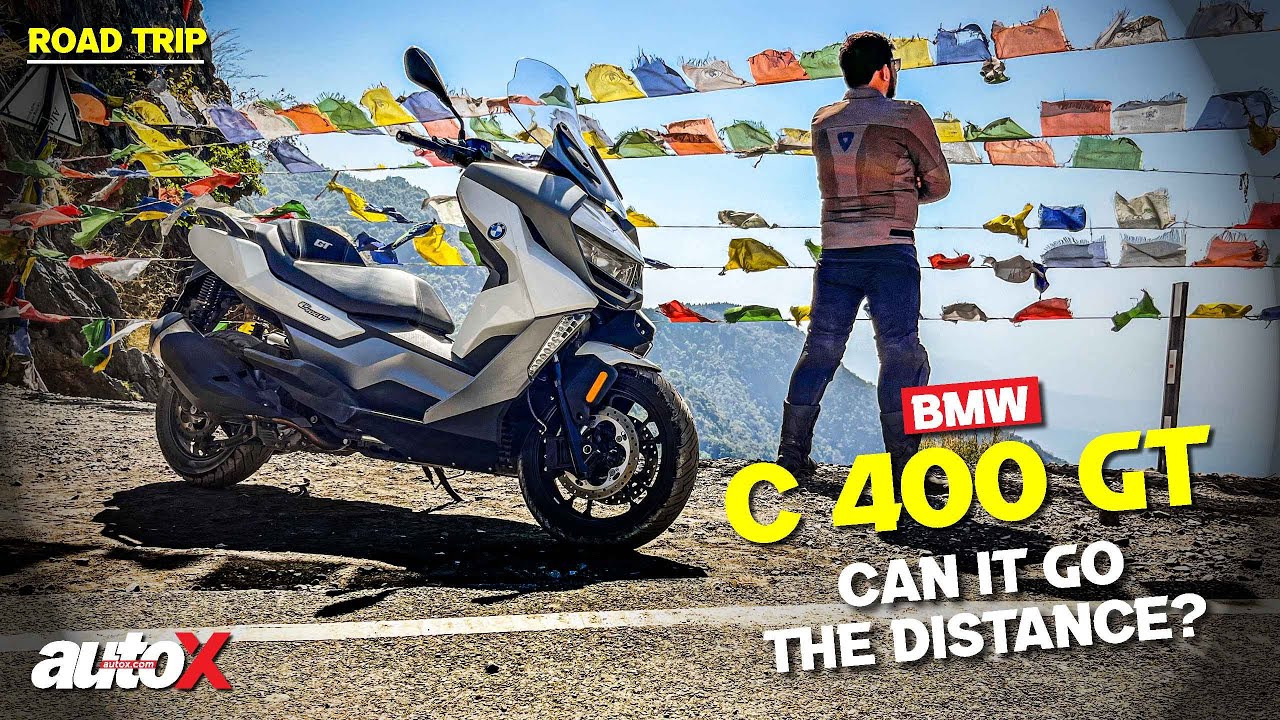 Before we get down to the technical details and what’s on offer and what’s not, let’s make one thing very clear – no matter what you think of it, there’s no denying that the C 400 GT looks special and every bit as pricey as it is. Headlined by a sleek front fascia and adorned by BMW’s cutting-edge full-LED headlamps, DRLs, integrated LED indicators, and a tall and wide windscreen, the C 400 GT cuts quite an exquisite figure. Whether you’re scooting around in town or are on a road trip, the C 400 GT attracts eyeballs like moths to a flame.

Since it’s a scooter at heart, the saddle is long, wide, and accommodating. The party piece is the GT seat with superb back support. I covered more than 600kms on a round-trip from Delhi to Mussoorie over two days, with zero complaints. 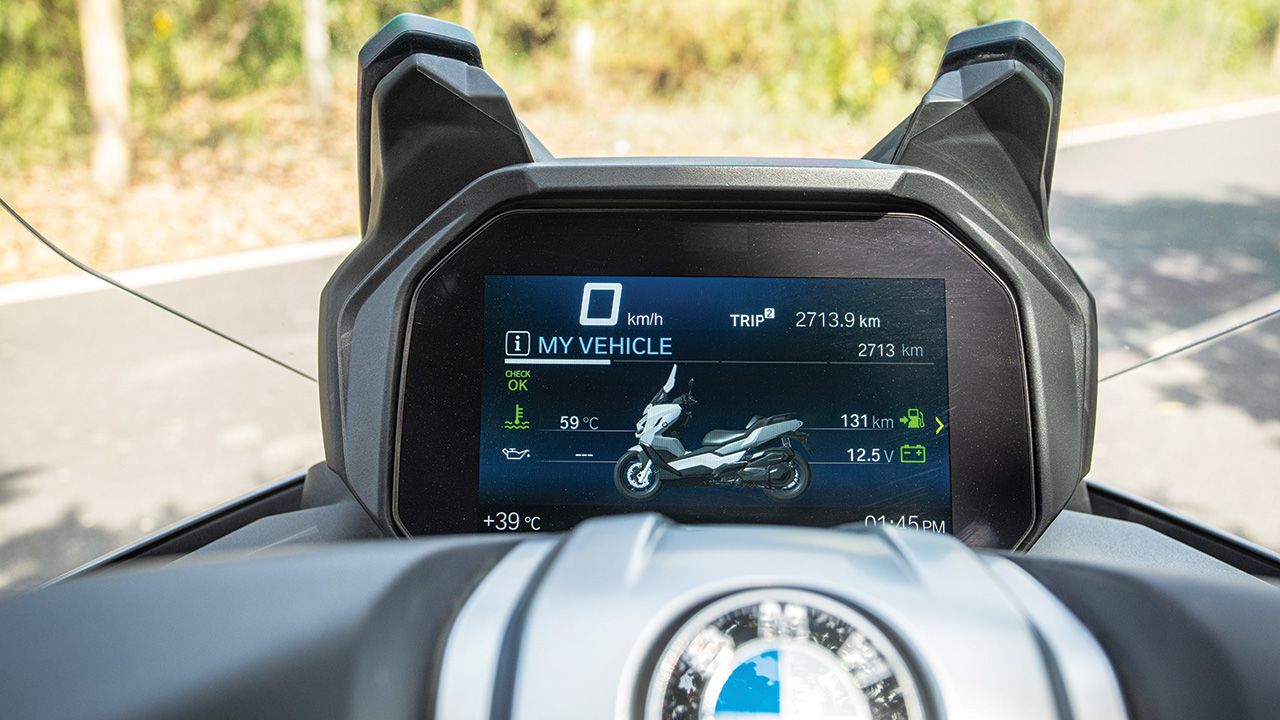 In terms of features, you don’t get many frills, but it’s decently kitted out. There’s a crisp 6.5-inch TFT display, which is operated via a multi-controller. It gets keyless functionality for ignition, steering lock, storage compartments, and fuel filler cap. The scooter also gets ride-by-wire throttle, a non-switchable traction control system, and dual-channel ABS – and that’s it in terms of electronic aids. You also have smartphone integration available, which offers arrow-based navigation and helps you play and control music on your Bluetooth headset.

Being a maxi-scooter, it gets two glove storages, with a USB charging port in one, and there’s a massive under-seat compartment, featuring the BMW Flexcase. The Flexcase has a flap, which can be extended downwards to accommodate a full-face helmet. However, you can’t start the scooter without retracting the Flexcase back, as it would, otherwise, come in contact with the rear wheel on the move. 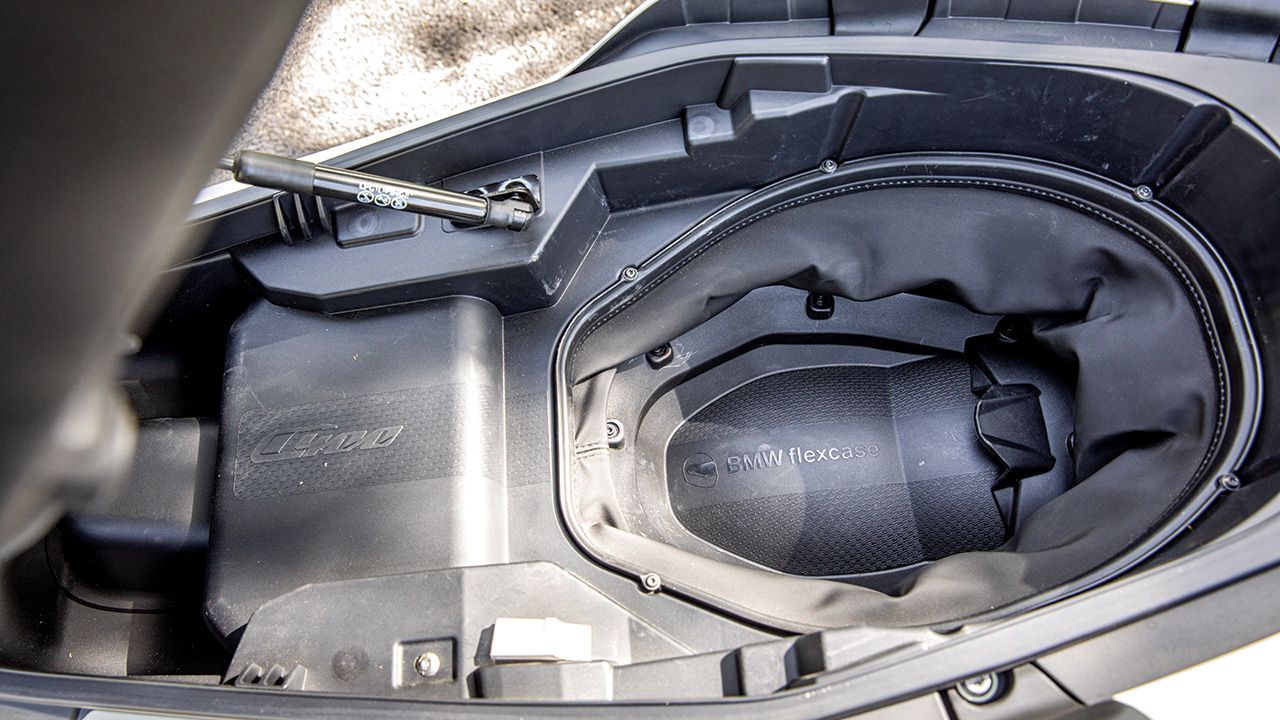 If you’re an enthusiast who lives and breathes the spec sheet of your two-wheeler, the C 400 GT will come across as a major disappointment. Under its big bulky bodywork, this BMW packs a water-cooled 350cc single-cylinder – yeah, it’s not even 400 as its name claims. The engine is good for only 34bhp and develops 35Nm of torque. And since power is transmitted by a CVT transmission, you can’t expect ground-breaking performance either. But is it really as underwhelming as the numbers suggest? 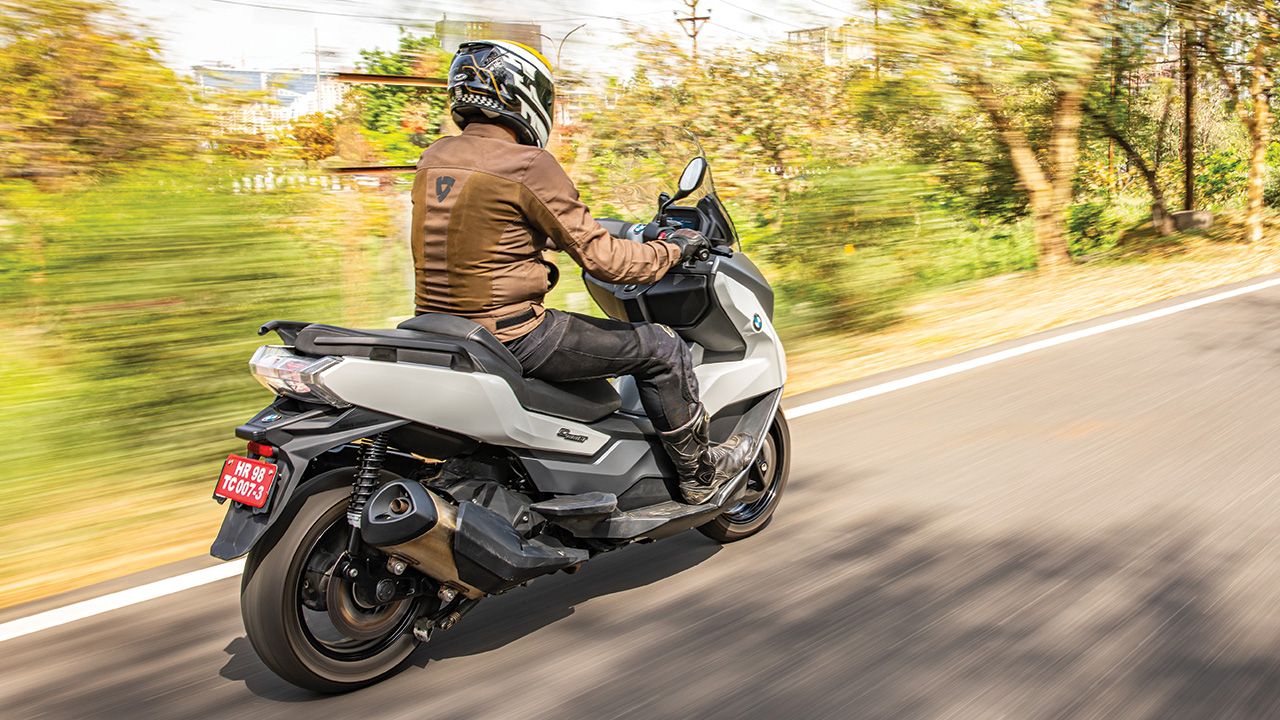 One thing is for sure, the C 400 GT won’t set your riding pants on fire with its turn of speed. Tipping the scales at 214kgs, the C 400 GT accelerates rather leisurely. The refinement from the drivetrain is exemplary though. In city traffic, it’s just effortless and much, much quicker than your average scooter. However, the throttle response does feel snatchy at low speeds. All said, in terms of engine performance, it is not really a speedy machine.

On the flip side, if you start gauging it as a twist-and-go fun machine – one that can also be used for long trips – the C 400 GT will surprise you, in a good way. Out on the open road, the GT has more performance than you’ll ever need on Indian highways. You can cruise comfortably at 120km/h, without any sign of strain from the engine. The tall windscreen, comfortable ergonomics, and a cushy seat make long rides a breeze. It’s a true GT scooter in every single way. 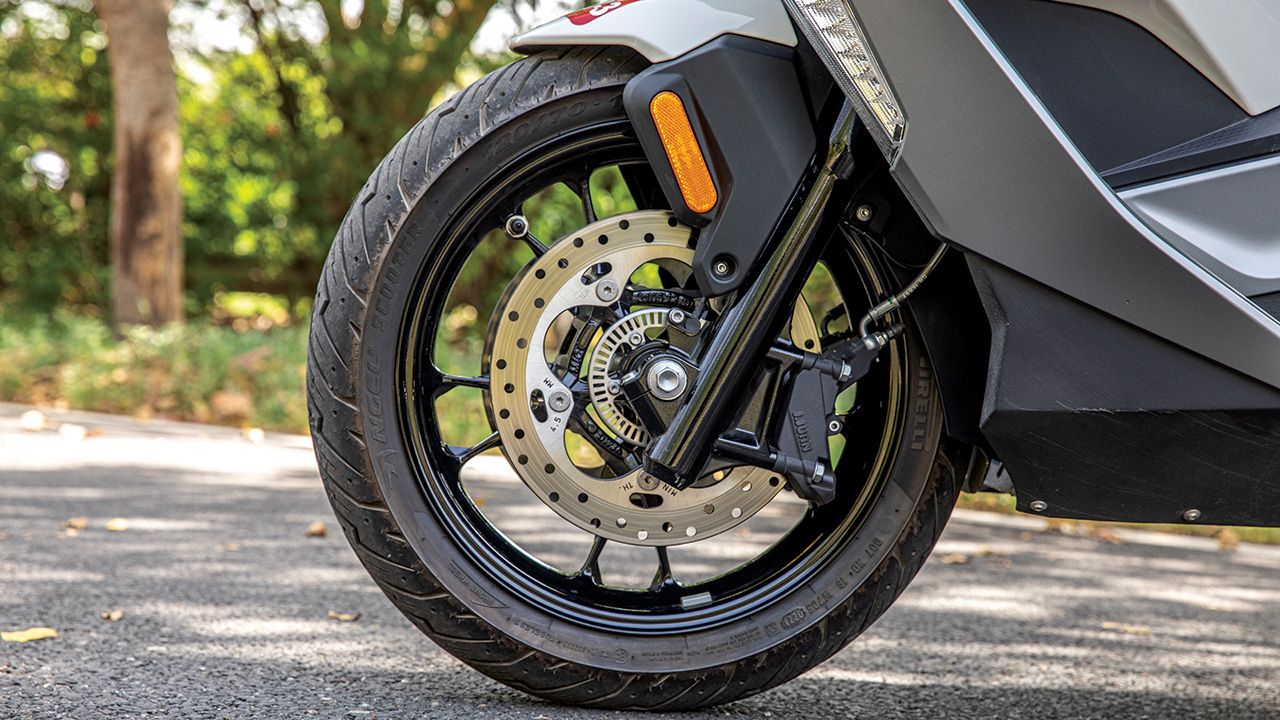 However, it’s not without a few downers – for instance, the ride quality. Since it’s a GT scooter, which has been imported into the country as a CBU, you can immediately tell that its suspension is set up for the velvety European tarmac and not for our crater-filled roads. However, while the ride is firm at low speeds, it gets better as you start moving faster. On a smooth stretch of tarmac – which is around 80% of the stretch between Delhi and Dehradun – the C 400 GT offers a supple ride, very much like a big bike. Over wavy roads, it does feel jittery, and there’s a lot of vertical movement from the front end, but overall, it’s a confident and effortless tourer. The high-speed stability is stellar as well. However, you’ve got to be careful at these speeds, as going over expansion joints and unexpected bumps can be unsettling. That said, expecting its small wheels (15-inch at the front and 14-inch at the rear), and short travel suspension (110mm at the front and 112mm at the rear) to absorb big bumps like a GS motorcycle is expecting a bit too much, I think.

When the going gets twisty, the C 400 GT shows its delectable balance. Despite having a wheelbase that stretches over 1,500mm, the GT is, surprisingly, an able handler. It tips into corners beautifully, and thanks to its massive footprint as well as fat rubber, it’s surefooted and never twitchy. Sure, it doesn’t sniff corners like a middleweight BMW, but the GT’s handling is rather fluid. Combine that with the motor’s get-and-go nature, and it doesn’t come across as a bad thing to hoot-and-scoot around in the city, on the highway, or in the hills. 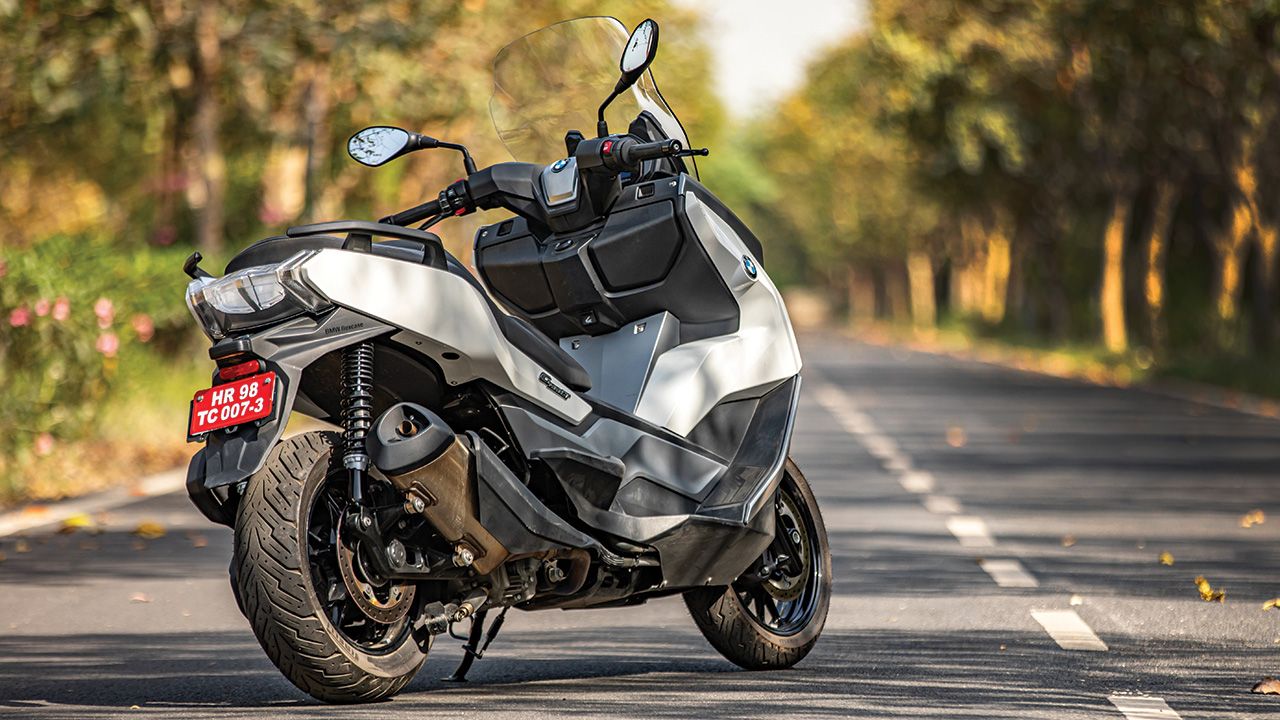 The C 400 GT is proof that one shouldn’t make the mistake of judging a book by its cover – or in this case, a two-wheeler by its spec sheet. Sure, it may not have a 100+bhp multi-cylinder engine as its high price would warrant, but, then, it has no dearth of performance. Plus, its mature riding dynamics and effortless nature make it a joy to ride everywhere. It’s a real shame that it costs as much as it does, but if you put its price tag aside, the C 400 GT is a first-rate product.

And, for those who say, ‘Buy a middleweight BMW motorcycle for that price instead!’… well, that’s like telling a wealthy person to buy Gucci pants instead of spending a similar amount of money on Gucci shorts. You’ve to understand that when your pockets are that deep, it’s not always about getting the maximum value. Sometimes, it’s just about comfort, style and convenience. 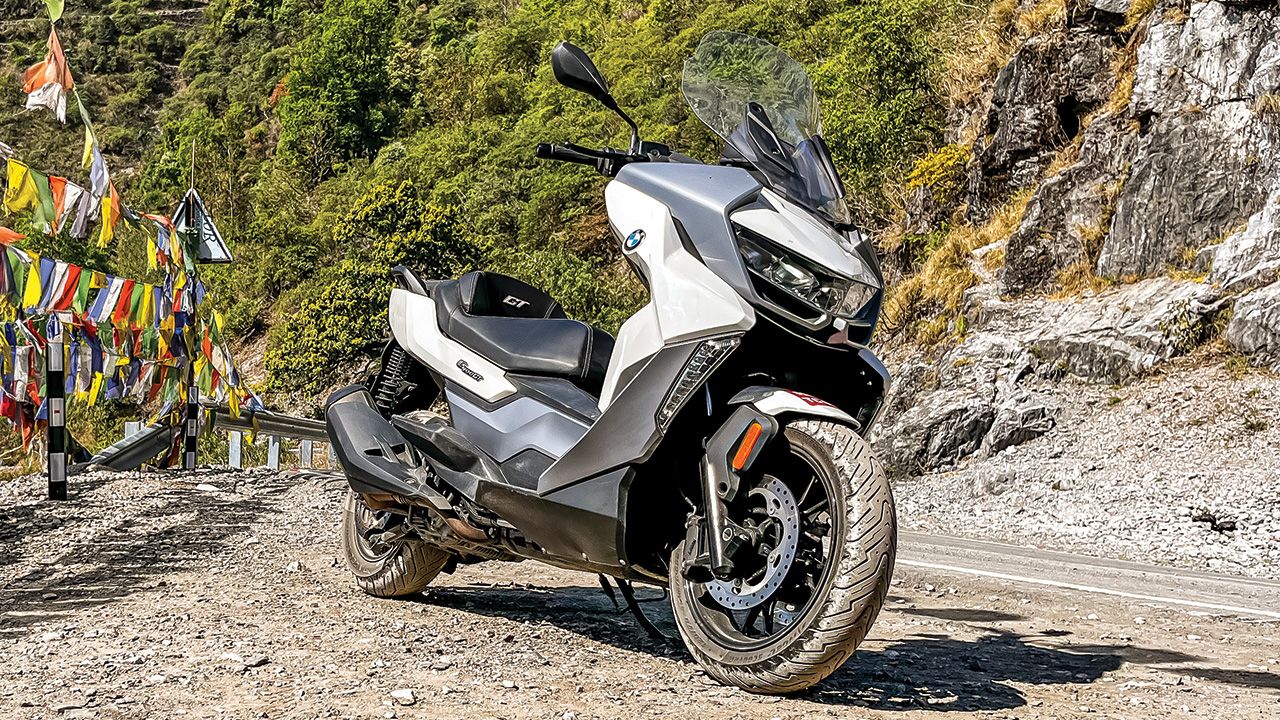 X-Factor: An effortless, stellar, and all-round maxi-scooter that can do virtually everything without breaking a sweat.