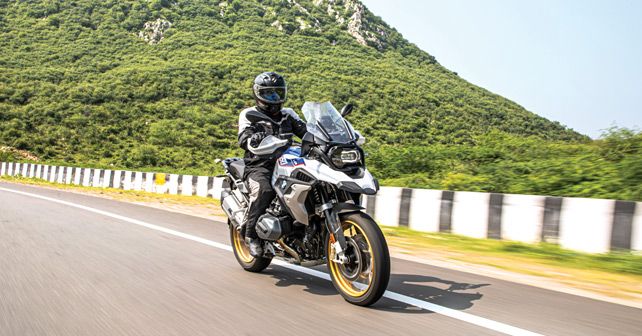 The BMW R 1250 GS offers more power and is more refined, but it’s the ShiftCam wizardry that makes it an ADV for all seasons.

The BMW R 1250 GS is claimed by many to be the best full-size adventure bike in the world. But the sceptic in me found it to be an overly generous claim, considering that we live in the golden age of ADVs, with the likes of the Triumph Tiger, Ducati Multistrada Enduro and Honda Africa Twin. So, ever since the R 1250 GS made its debut in India, I’ve been patiently waiting to find out if this bold claim can stand its ground.

My first impression of the 249kg GS was quite overwhelming. I guess this is how the Avengers felt when they first confronted Thanos. Luckily for me, the GS isn’t out there to annihilate me – if anything, it’s there to take me on the road less travelled and then return me safely home without any hitches.

Now, before I share my experience with this colossus, let’s get the hefty matter of price out of the way. The R 1250 GS starts at ₹16.85 lakh, but the version that we have with us is the Pro package with Style HP equipment, which is north of the ₹20 lakh mark. Now that certainly is a lot of money, but then a flagship BMW ADV, or any BMW for that matter, is never cheap. 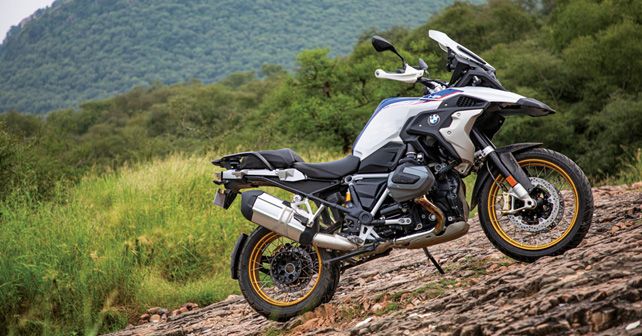 Heart of the matter
The previous generation R 1200 GS was one of the most capable and successful ADV bikes in the world, and to improve on that must have been a daunting task, considering that BMW knew that they themselves are their biggest competition.

So, what’s different here? For starters, it’s got a different powertrain and a bigger 1,254cc engine. The idea wasn’t to just increase the capacity and add more grunt but to introduce variable timing to the boxer engine or, as BMW calls it, the ShiftCam system.

Now, this may sound like a school session, but I promise to make it brief. Like its predecessor, the motor still has four valves per cylinder, but now it can optimise the cam timing according to the rider’s requirements. In simple words, timing is everything.

At low revs, the partial-load cam has a shorter lift ensuring that fuel economy doesn’t suffer, but when you want outright power, then the full-load cam offers a higher valve lift. A sensor detects the throttle intake, which then optimises the engine’s response accordingly. With 134bhp and 143Nm, the new GS boasts a 9 per cent gain in power and a 14 per cent increase in torque. 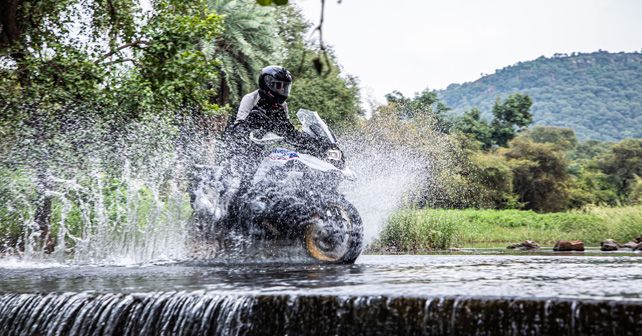 Devil’s in the details
Now, it’s time to saddle up and see how the bike fares in real-world conditions. The first thing that I noticed was that it comes with a keyless remote, or fob. I pressed the ignition button, and the new 6.5-inch TFT colour screen came alive, showing the selected riding mode amongst the four present – Road, Rain, Dynamic Pro and Enduro Pro. Apart from the dominating tachometer, it also displays the digital speedometer, gear indicator, clock, and temperature. 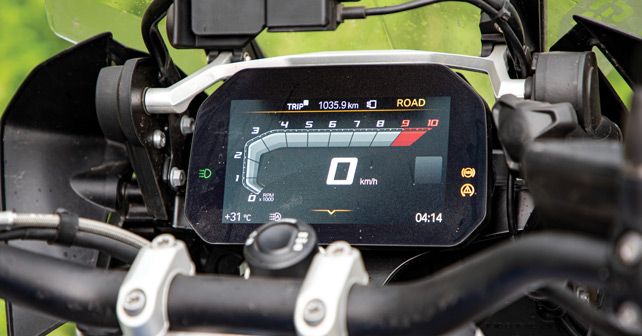 I had to carefully negotiate my way out of the city, so I played it safe and opted for Road mode, which ensured that the suspension set up was soft, making me free from any worries concerning potholes – as the GS easily sailed over them. I quickly realised that the GS is a very accommodating and versatile machine, as it’s happy to adjust to your riding style. A gentle twist of the throttle is enough for it to cruise comfortably at 1,500rpm in slow-moving traffic without any hiccups.

It never tried to yank away from me or break free. On the contrary, once I got used to its weight and the height, it was an easy drive. What was even more impressive was its light and stress-free clutch.

Of course, when you’re stuck in traffic on a big bike, the first thing you do is to curse the heat emitting from the engine, which slowly wraps around your legs like quicksand. But, surprisingly, that wasn’t the case with the GS. The heat from the motor was minimal.

We finally exited the city and were welcomed by long open stretches of tarmac. It was now time to unleash the beast. I quickly changed to Dynamic Pro mode, and instantly everything became a blur. I twisted the throttle, and the bike picked up some serious speed. Gone was its relaxed nature as the urgency jumped a couple of notches – all the while I was wondering how an ADV could achieve such feats of a sports bike.

The GS blazed past the three-figure mark in a blink of an eye, before it could reach the 3,000rpm mark. And when the mid-range power boost kicked in after 5,000rpm, the GS was frighteningly quick. Sadly, the road conditions rarely permitted me to hit the top-range. 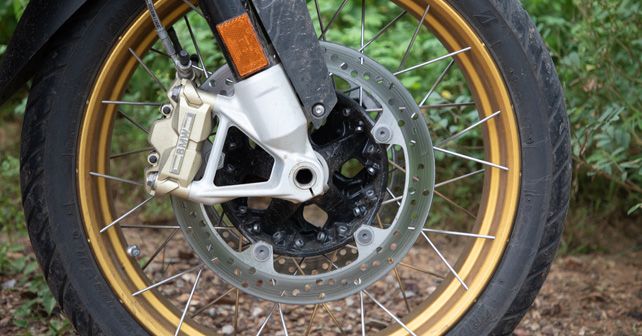 Dynamic Pro mode also arms the GS to take on corners. With a stiffer suspension setup, it offers precise handling with rock-solid stability. The GS makes even an amateur look like a pro rider with its technological wizardry. All the credit goes to Electronic Suspension Adjustment (ESA), which automatically adjusts the preload and, based on the brake, throttle and lean angle inputs, makes another adjustment – all the while keeping the rider’s weight in its calculations. And with the option to customise traction control, the GS allows you to drift on the tarmac as well. 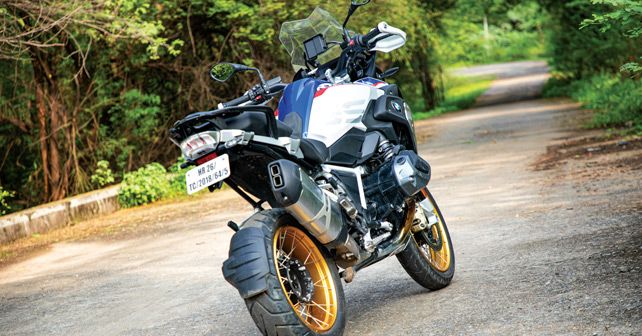 When the going gets tough
I was having so much fun with the GS on the tarmac that I was reluctant to go off-road. But it had to be done. Initially, I felt as though I was going in over my head, as the GS was on road tyres. Nevertheless, I switched to Enduro Pro mode on the go and assumed the stand-up position.

The tyres, the traction control, and ABS were all in sync and took the challenge head-on – not for a second did I feel like the bike was a handful. I realised two crucial aspects of the GS. One, the GS is so well balanced that it gives you the confidence to push your limits, and all the while you’re aware that it can do so much more. Second, the bike is so precise that it offers enough wheelspin to let you have some fun without ever getting out of control. There is, of course, always the option to switch off traction control, but, honestly, I refrained from doing any such thing.

I’m a believer
So, is the R 1250 GS the best ADV in the world? Hell yes! It’s like a Swiss Army knife that offers you plenty of features, and road-hugging handling on all kinds of terrain. It now comes with new safety features, like Dynamic Brake Control and Hill Start Pro. Sure, it’s tall, heavy and pricey, but these aren’t really the GS’s flaws, just my own limitations. 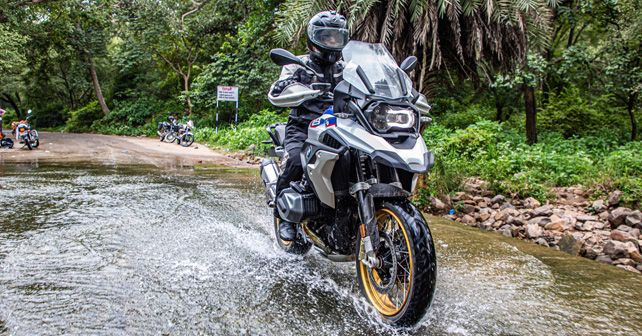 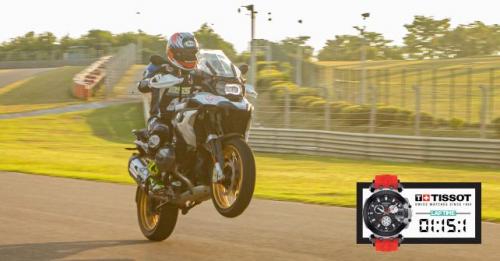