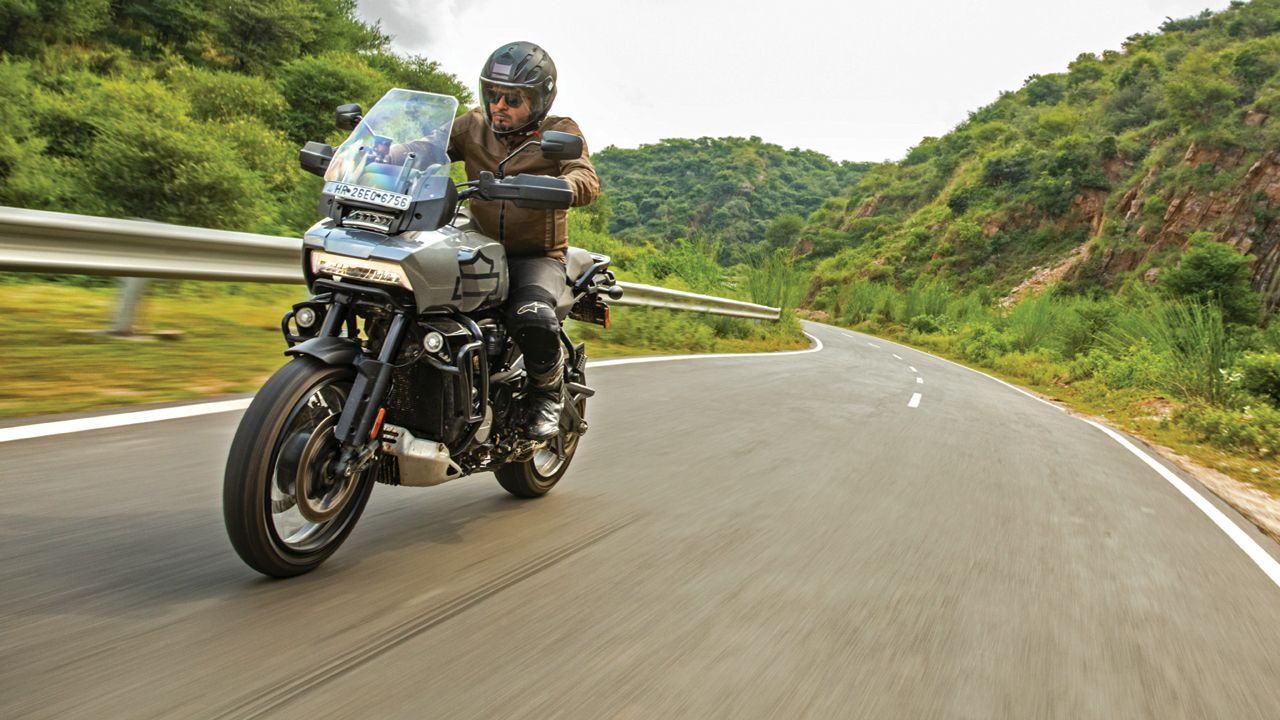 The Pan America faces a dual challenge of proving its worth as an ADV and revitalising the Harley-Davidson brand, both in India and around the globe. So, is it really the game-changer that Harley had been waiting for?

Oh, how I laughed when Harley-Davidson unveiled the Pan America 1250 ADV concept in 2018. I couldn’t fathom the fact that how could something that looked like a whole planet in itself can take you around the globe – the Pan Am looked fat, ungainly, and preposterous. What perplexed me more was the motivation behind such a product – what was Harley up to? Here we had an American legend, famous for its heavy metal cruisers, determined to engage in an uphill battle against the might of the BMW GS, Ducati Multistrada, etc. Harley had not only lost its mind, but it was also on the verge of losing its identity. Or, so I thought.

As you may have guessed, I had an intense distaste for the Pan America 1250 from the very beginning. But when I rode the production version of the motorcycle a couple of weeks ago, I knew that I must not let my prejudice overshadow my objective assessment of the motorcycle. So, here is the good, the bad, and the ugly of the H-D Pan America.

What a f-ing engine! I mean seriously – it’s the biggest highlight of the motorcycle, well, at least for me. And I’ll tell you about its performance, but let’s first look at the main details of this brand new 60-degree V-Twin. Dubbed the Revolution Max, it’s a liquid-cooled 1,252cc short-stroke engine (bore x stroke: 105mm x 72mm), which develops 150bhp and 128Nm of torque. Peak power is developed at 8,750rpm, and the engine redlines at 9,500rpm – revolution max, indeed! The engine has a compression ratio of 13:1. Frankly, it all sounds very un-Harley.

There’s no denying that Harley went to town to develop this engine. The bore and stroke figures are very similar to those of the old Multistrada 1260’s engine, and because the crankpins have been offset by 30-degrees, the engine has a 90-degree firing order for better low- and high-end grunt. What’s more, it has dual-overhead camshafts, variable valve timing (VVT), maintenance-free hydraulic tappets, a dry-sump oiling system, forged aluminium pistons, and so on. As you can make out, it’s every bit as modern as America’s space programme. Not to mention, it picks up the pace like a rocket booster too. 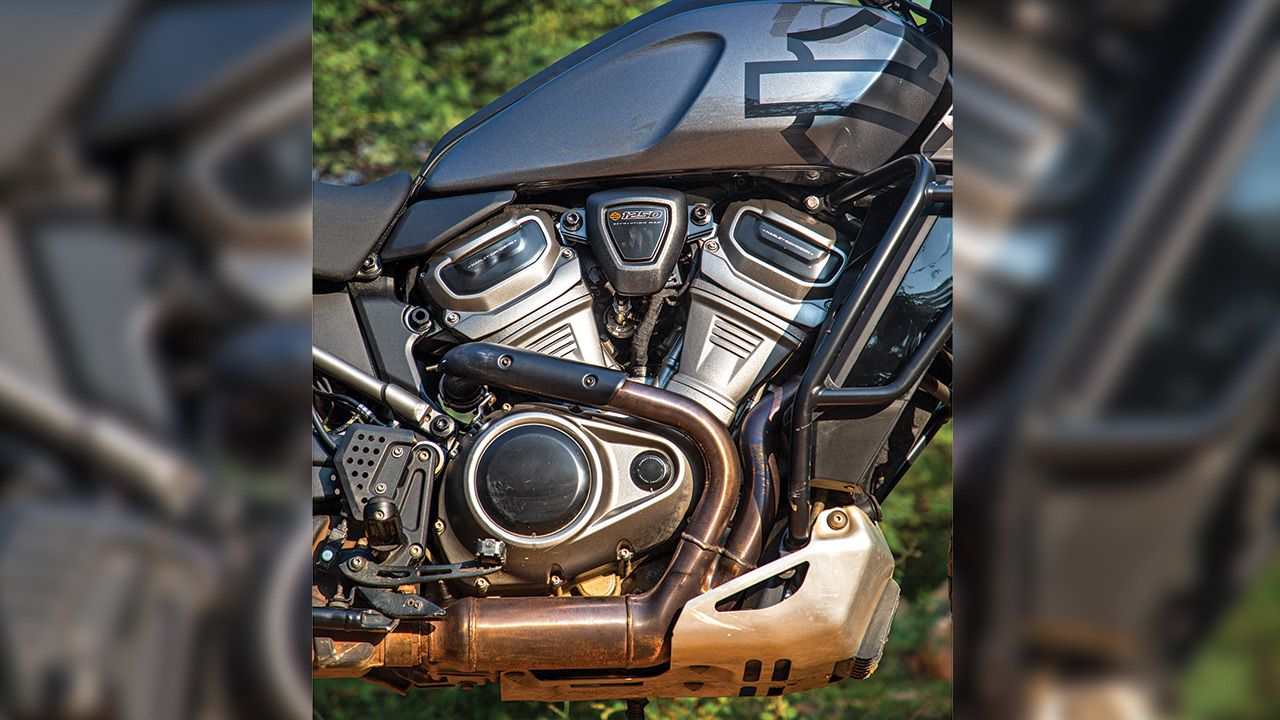 Crank the engine, and it’ll greet you with a distinct rumble, which is so uncharacteristic of a Harley – although you can hear a bit of the familiar Harley jangle during cold starts. The V-twin is supremely refined, and it beats like an Italian twin. Until about 4,000rpm, it picks up pace briskly – neither too aggressive nor too lazy. Of course, it doesn’t quite have the thump-and-punch of a typical Milwaukee cruiser, but reach on the other side of the rev-band – 5,000rpm and beyond – in Sport mode, and it turns into an absolute monster. Regardless of its 258kgs of weight, the Pan Am shoots forward like a predator on the hunt. It’s brilliant. It’s addictive. And it’s impressively mind-blowing, especially when you consider the fact that it wears a bar-and-shield badge.

Even at low revs, the engine has decent poke. While off-roading, however, I did feel that I had to slip the clutch more often. Overall, I found the engine to be quite tractable in all riding conditions. The six-speed transmission features a slipper clutch, and surprisingly, the clutch lever action is light. 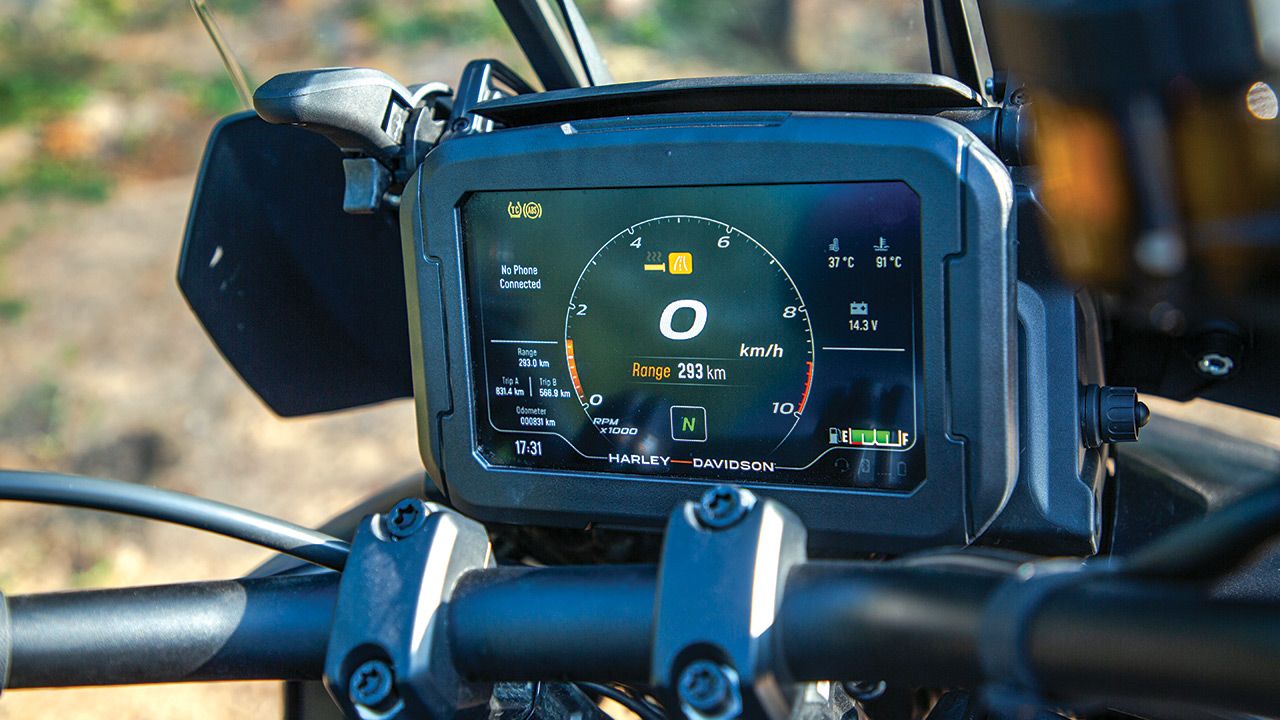 Another aspect of the Pan Am that I loved was its electronics suite. As standard, the bike has five riding modes on offer – Road, Sport, Rain, Off-Road, and Off-Road Plus. Now, the bike we rode was the Special version and, therefore, had two more customisable modes on offer. You can change the level of intervention in each mode. On the road, I mostly kept it in Sport mode because it was a little too exciting. The throttle response was explosive, and the bike felt alive irrespective of whether you’re on the road or off it.

As for its handling, well, let’s just say that it’s another area wherein the Pan Am has taken a giant leap. Like its main rivals, this Harley ADV features a front frame, a mid-frame, and a tail section – all of which are bolted to the engine. Shock absorbing duties (on the Special version) are taken care of by semi-active Showa electronic suspension, along with something called Vehicle Load Control. The latter senses the weight of the rider, pillion, and luggage and automatically sets the pre-load adjustments as soon as you hop on the bike.

Once you’re on the bike, it doesn’t look or feel as intimidating – however, the standard seat height of 848mm will obviously make some struggle for flat-footing. Harley has a solution for this – Adaptive Ride Height or ARH, which reduces the ride height to 830mm in conjunction with the electronic suspension. It’s an optional extra and wasn’t fitted on this particular press bike. 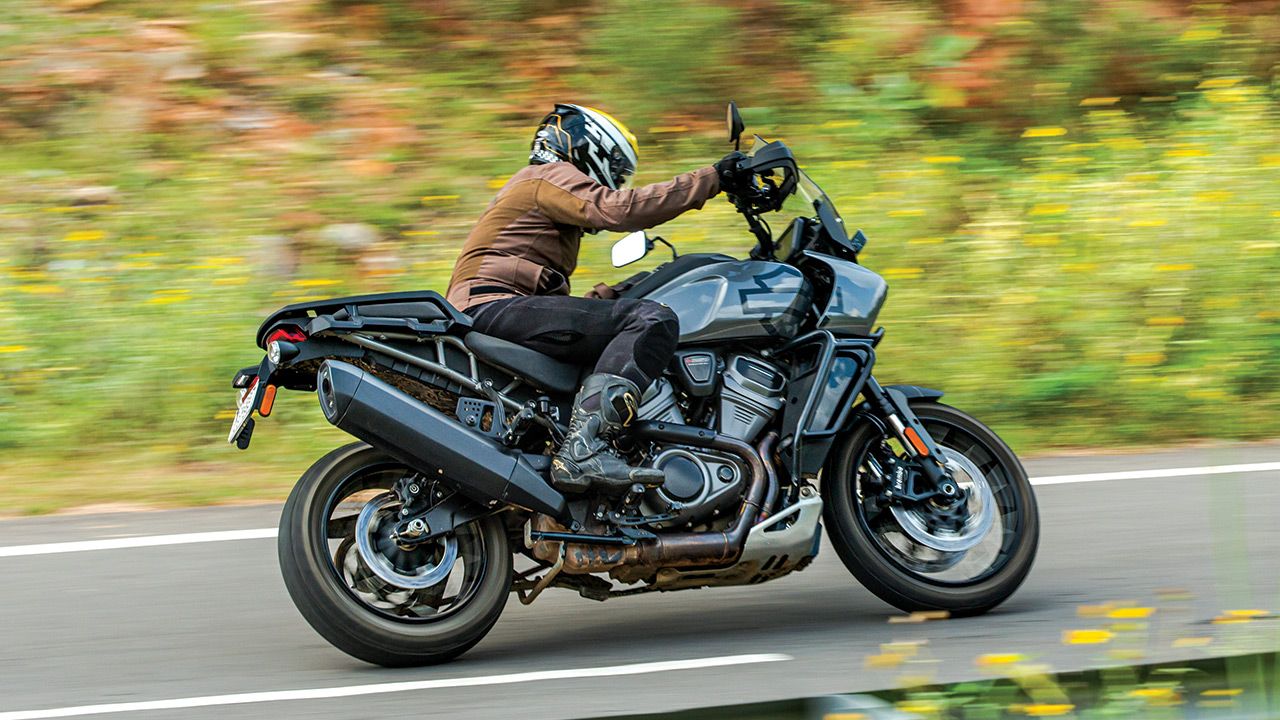 On the move, the Pan Am doesn’t feel cumbersome, but, then, it also doesn’t feel as natural as a 1250 GS. You have to spend some time on the saddle before you can get comfortable with it. On open roads, it’s sublime and can literally fly. High-speed stability is impressive, and the riding position is comfy with tall bars, a wide seat, and neutrally positioned pegs. You can spend hours and hours on the highway in utter comfort. So, as a tourer, it’s as capable as any of its rivals, if not more.

Around corners, well, this is where it gets even more interesting. I can’t for the life of me remember any Harley that felt this stable or planted around corners. Agreed, the steering is lazy – owing to its long wheelbase and a heavy front-end – but once it leans, it tracks the corner without flinching. You’ve got to commit to it to though, meaning you can’t change your line mid-corner. Of course, it doesn’t have the balance or agility of the GS or Multistrada, but the way it handles is a revelation in itself. Let’s just say, I was caught off-guard by this pleasant surprise.

Let’s start with some of the missing kit – the sort of stuff that is expected on a bike of this segment. The Pan Am gets chain-drive instead of the more sophisticated and maintenance-free shaft-drive, which is offered with the 1250 GS. It’s a big miss on a motorcycle that’s meant for outdoor adventures and supposed to be exposed to elements all the time. Among other bits, there’s no quick-shifter, and the gear-lever has long and clunky throws. The brakes are also not the best amongst its peers, as they don’t have enough initial bite.

The quality and fit-and-finish are satisfactory but not the best in the segment. The windscreen is a little too flimsy, and at high speeds, it can’t stop flapping. The 6.8-inch touchscreen display is quite good, but it can’t be operated when you’re on the move, which means that you’ve got to navigate through a sea of buttons to change settings. Another bugging feature is the wireless key – it works perfectly for ignition, but you need the traditional key for handle-lock and fuel cap. I’ve no idea why Harley did that. 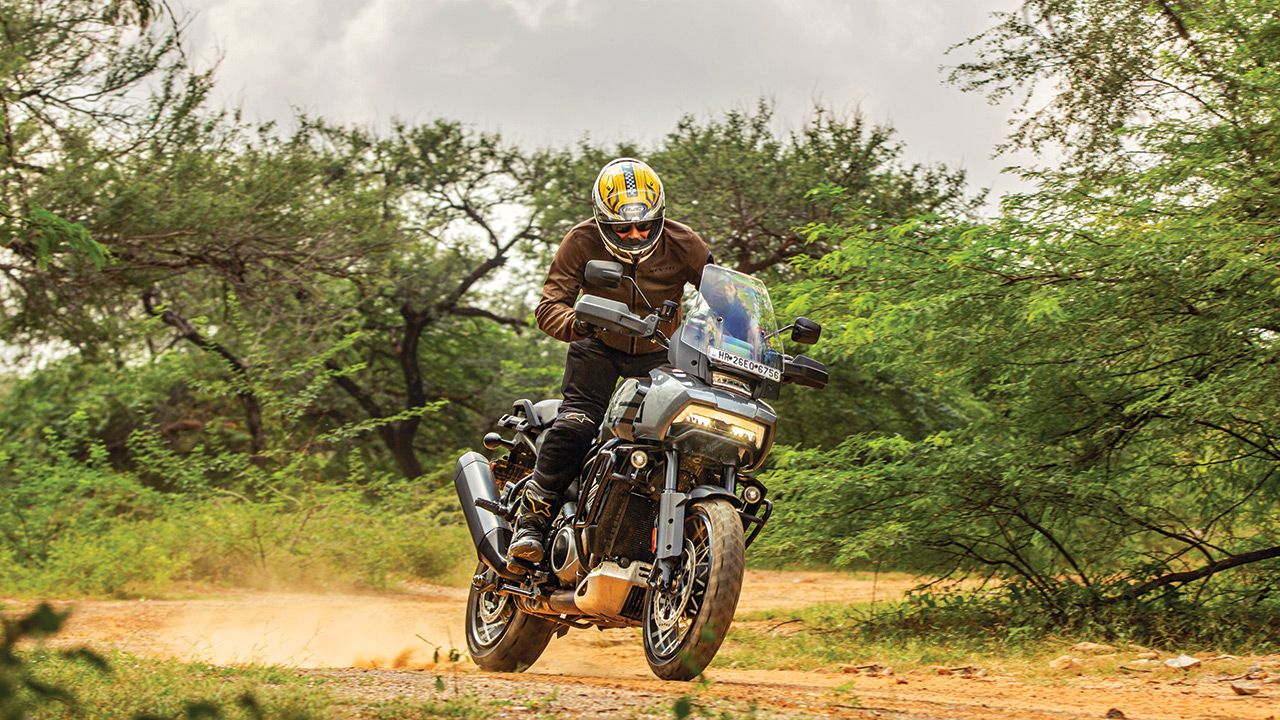 Last but not least, you can’t get around its weight, especially when you’re riding off the beaten path. It feels top-heavy at low speeds, and the suspension feels noisy. There are two modes for suspension in off-road mode – Firm and Soft – and they definitely make a difference, but neither can stop the suspension from feeling clunky. As speed builds up, you definitely gain more confidence though. That said, I feel off-roading with big ADVs like the Harley or the GS is all about the right technique and how you connect with the motorcycle. Sure, a GS may feel friendly from day one, but it’s all about the feel you get with the motorcycle.

The engine heats up quite a bit, especially at low speeds. On a hot day, it’s almost impossible to ride this thing. Other than that, I’m still not a fan of its design. Harley has surely thrown everything and the kitchen sink (the front-end does look like that) to develop the Pan Am, but it’s still a polarizing design. Sure, there are cool elements like the ‘Daybreaker’ LED headlamp, but overall, it’s still a big burly bruiser. However, like we scribes always say, ‘design is subjective’, so you may have a different opinion.

Even after riding the Pan America, some of my opinions on it haven’t changed. I still believe it looks a little too porky for my liking and weighs as much as a small planet. And, I’d still prefer or suggest a GS over the Pan Am, despite the substantial price gap between the two. 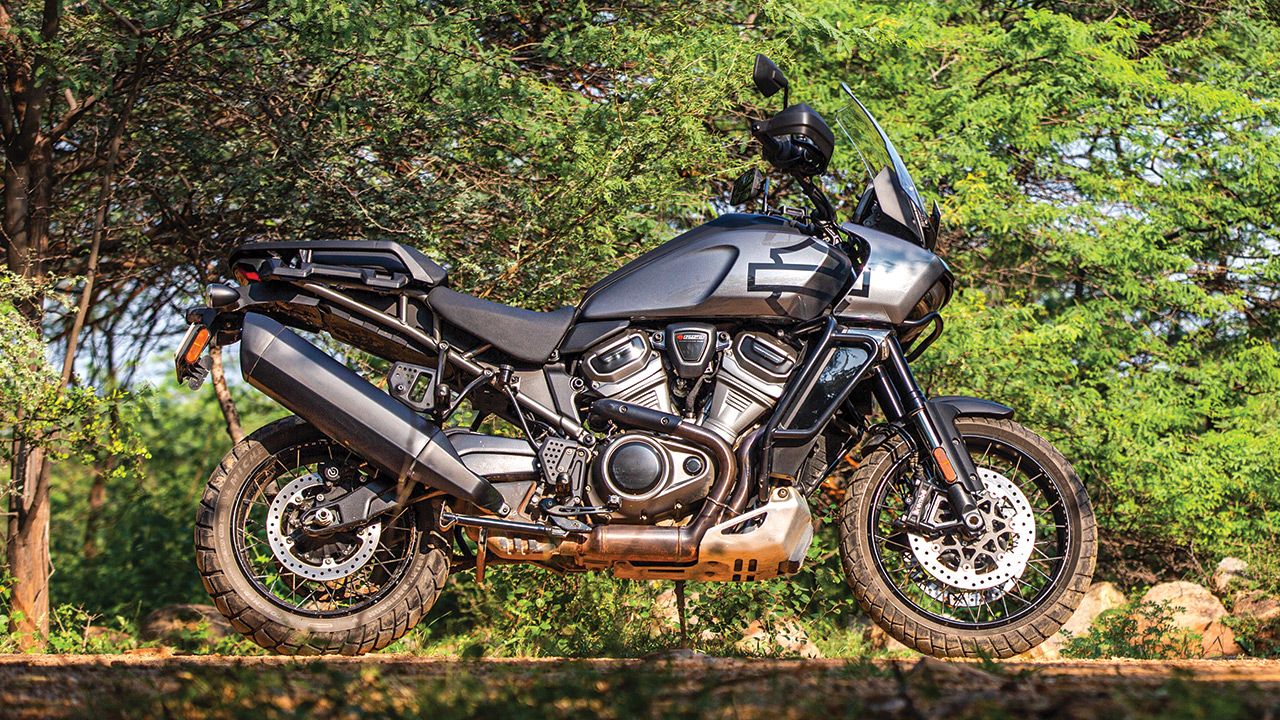 Having said that, I’d be lying if I ended this piece without confessing that I’m genuinely impressed with what Harley has achieved here. I mean, what a freaking turnaround! In its first attempt at making an ADV, Harley-Davidson has come so close to knocking the biggies down. What an achievement.

Lastly, not only has it broken the brand’s ‘potato, potato’ stereotype but it has also catapulted its maker from the depths of despair into a world of hope. It may not have scored full marks as an ADV in this test, but it’s a full 10/10 for Harley’s efforts. As for me, it’s time to eat the proverbial humble pie. 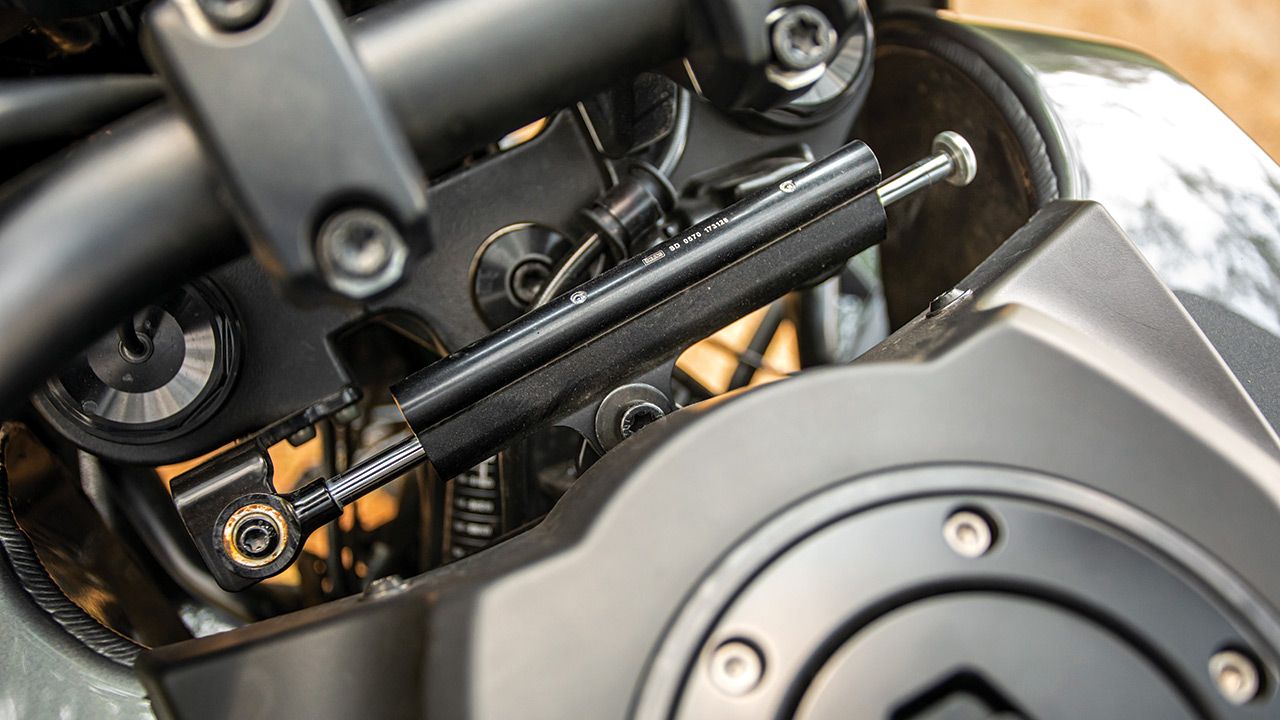 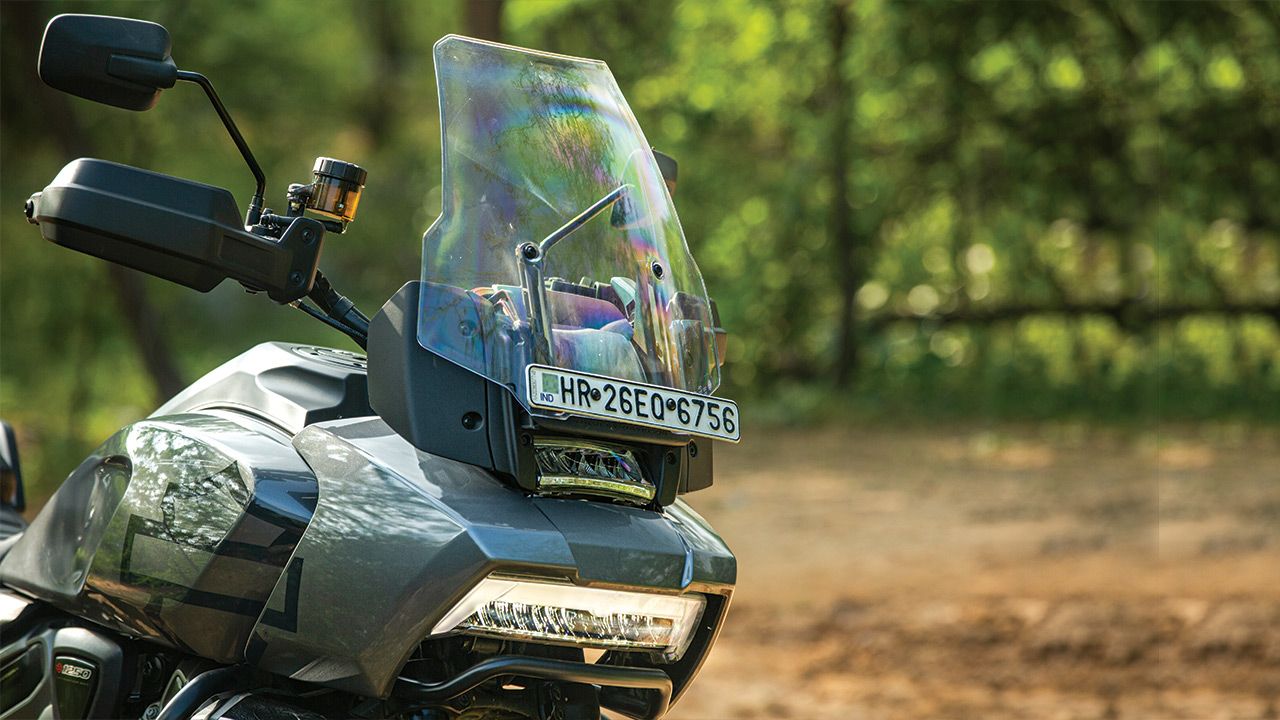 X-Factor: With its brutal performance & immaculate handling, the Pan America breaks all the Harley stereotypes, and how!